Though some aspects of Space Battleship Yamato merchandising are firmly rooted in the production years, such as music and publishing, plenty of new and different products began to appear shortly after Final Yamato brought the saga to a close in 1983. Much of that merchandising has already been presented elsewhere on this site (see links below) but there is still more to be seen, as will quickly become apparent here… 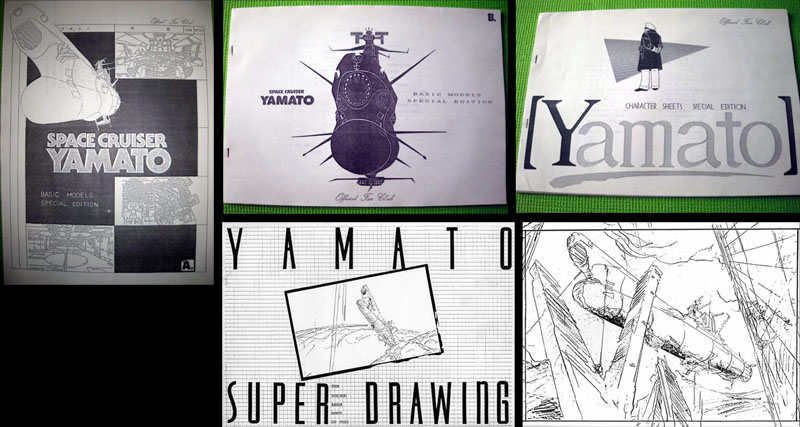 These four portfolios of Yamato animation model sheets were sold exclusively by the fan club starting in February, 1986. They were in tabloid format, which allowed collectors to examine the artwork at the same size it was drawn. “Yamato Super Drawing” brought together 100 of Yoshinori Kanada’s concept drawings for Final Yamato in which he displayed a dramatic sense of scale and majesty that became a style guide for the movie. Read our tribute to Kanada here.

It had been six years since any three-dimensional Yamato merchandising appeared, and the slump was finally broken by two companies in 1989. The Franklin Mint produced a limited-edition pewter Yamato with glass and gold-plated parts, and the Wave hobby company began releasing the first-ever Yamato garage kits. This was the first ripple of a new toy and model tidal wave that would arrive ten years later. 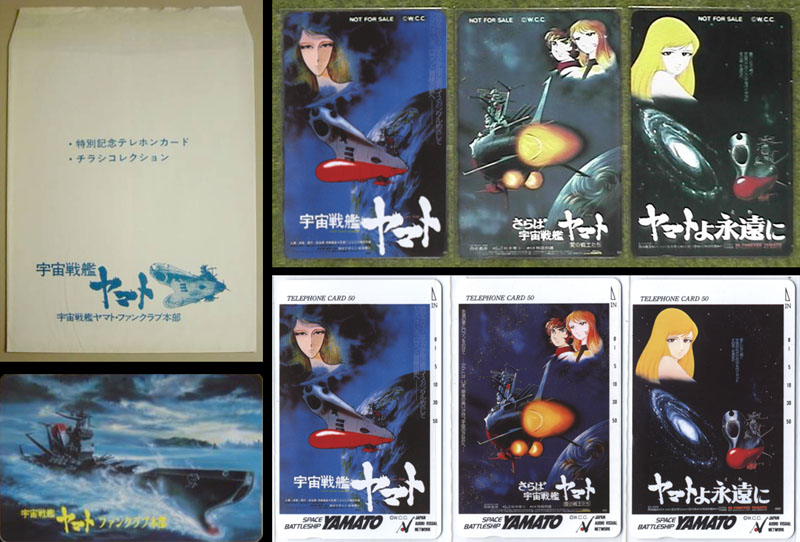 Another advent of the late 80s was the prepaid phone card, a pre-cel phone phenomenon that swept through Japan once it was realized that custom images could turn them into collectibles. The Yamato Fan Club got its very own card (packaged for members along with a collection of movie flyers) and more came later from two of Nishizaki’s other companies: West Cape Corporation (top row) and the video distributor JAVN (bottom row). Naturally, there were many more such cards to come.

The deeper Yamato receded into the past, the more it became subject to tributes of one kind or another.

Two minor offerings popped up as the 90s continued. Bandai visual included Yamato in a 1998 DVD-size calendar and Animage celebrated its 20th anniversary in summer 1998 with a series of phone cards that included Yamato. 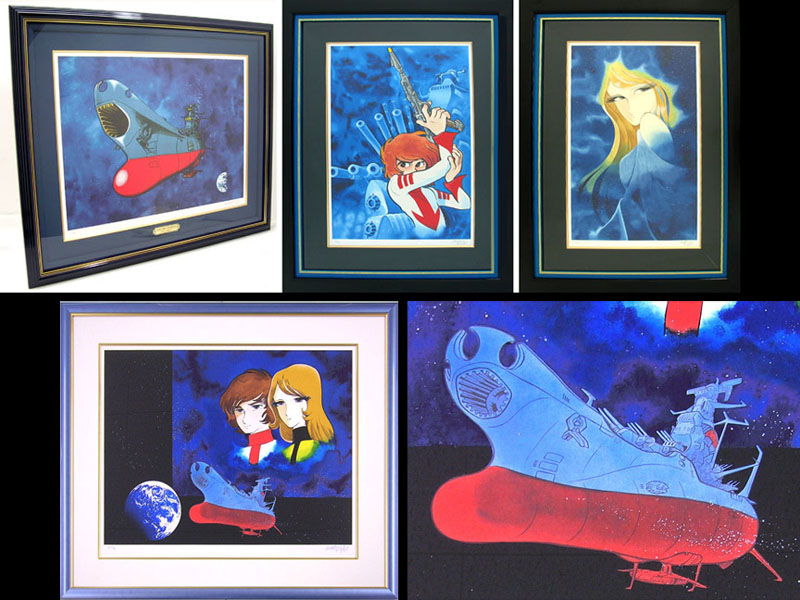 Another summer ’98 highlight was a popular art exhibition called The World of Leiji Matsumoto, held at Japan’s Kagamigahara aerospace science museum, kicking off a tour through more cities over the next two years. In the wake of this, he signed with a broker named Art Collection House to reproduce high-quality lithographs of his favorite paintings in signed-and-numbered limited editions of 250 each. 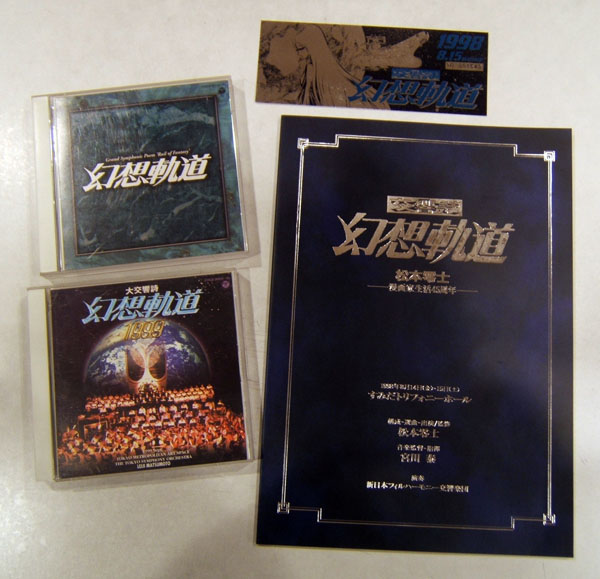 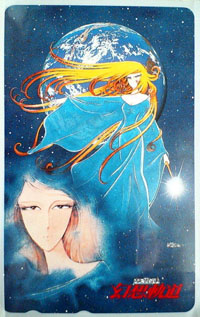 The next big thing to happen was the Rail of Fantasy concert in August 1998 to commemorate Leiji Matsumoto’s 45th year as an artist. Hiroshi Miyagawa and other luminaries performed concerts in both ’98 and ’99 with Yamato music front and center. Shown here are CD releases, a program book, and a phone card (above). Learn more about the concerts here and read an interview from the program book here. 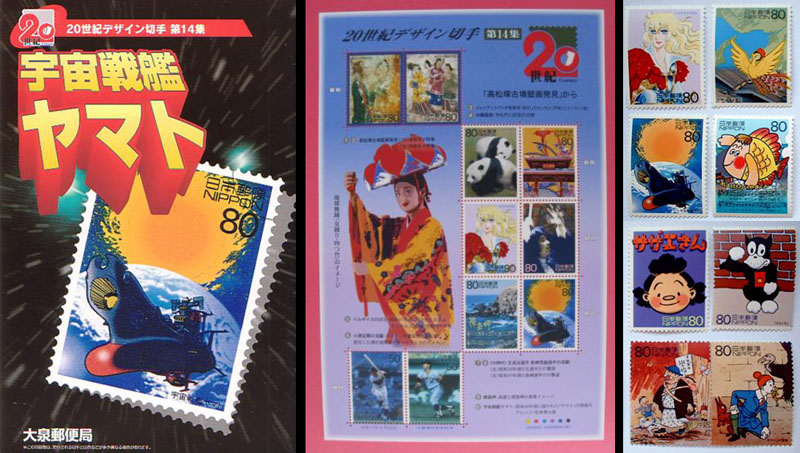 The 25th anniversary in 1999 brought on the biggest legacy year yet: Bandai’s first Yamato Playstation game took Japan by storm, their Banpresto and Mimuko subdivisions rolled out new toys, and their Emotion label began moving the saga to DVD. Other Bandai subgroups produced anniversary collectibles seen elsewhere in this record. But that wasn’t all. The saga rose to a new level altogether in April when the Japanese postal system decided to include Yamato in a collection of stamps to commemorate 20th century Japanese culture. The stamp (shown above) would be drawn by Leiji Matsumoto and issued in September, 2000.

See a gallery of this set here.

More anniversary trinkets appeared when toy and novelty maker Unifive (yet another subsidiary of Bandai) offered a limited edition set of finely-sculpted lapel pins. 2,000 such sets were made, and had the distinction of including character names in English.

Since anyone who watched Yamato as a child was now old enough to smoke, Unifive made this handsome anniversary Zippo lighter, also in limited quantities. The copyright names are abbreviated as LM (Leiji Matsumoto), TFC (Tohokushinsha Film Corp.) and BV (Bandai Visual). This lighter was re-released as a tie in with Matsumoto’s Great Yamato in 2001.

Finally, this classy set of four anniversary Zippos was crafted by the
Yutaka company and only carried Matsumoto’s name as the copyright holder.

One more release from 1999 was this pair of Yuki t-shirts, cleverly sold in her twin uniform colors. The illustration was specific to the shirt and does not appear to have been used elsewhere. 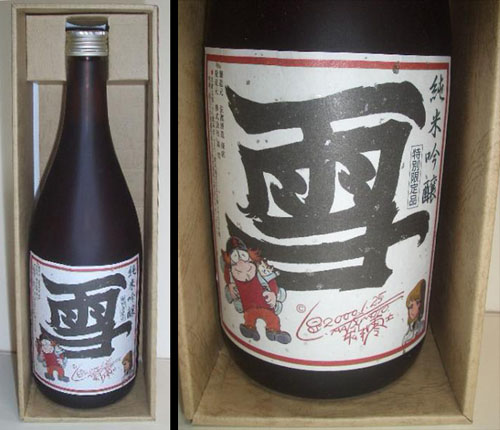 Into the New Century

In 2000, Leiji Matsumoto’s attention was focused on the all-new Great Yamato manga, which generated merchandising of its own (see a record of that here). He also formed a working relationship with software manufacturer Venture Soft that would lead to many more projects. Venture Soft’s creativity apparently went beyond computers, judging by this limited edition (600) bottle of Leiji Matsumoto wine they released in January 2000. The presence of Yuki on the label officially makes it a Yamato tie-in.

Matsumoto’s star flew ever higher as the year advanced, partially propelled by a relationship with the Kintetsu Railroad Company in Japan’s Kansai region, the southern portion of the country that includes Kyoto and Osaka. “The Drifting Express” was the name given to this campaign, which included some personal appearances and at least two Yamato promotions. 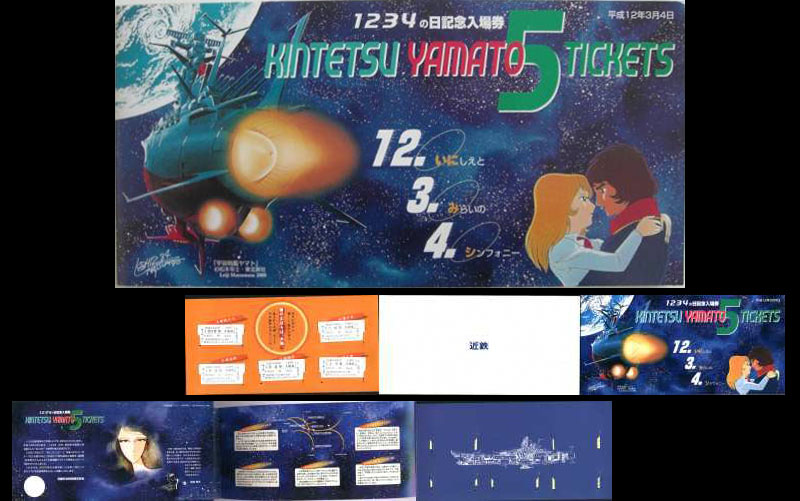 The first was a “Day of 1234 Memorial Ticket Set,” sold on March 4th, 2000. The number indicated Heisei year 12 (2000) month 3 (March) day 4, thus the tickets issued on this day were marked “1234,” a date that can only come again when a new calendar era begins in Japan. (Heisei began when the Showa era ended in 1989). The gimmick for this set of 5 tickets was that all the stations had “Yamato” in their names: Yamato Takada, Yamato Yagi, Yamato Asakura, Yamato Saidaiji, and Yamato Kami-ichi. The price for the set was a paltry 750 yen (about $7.50).

This was a new phone card released the same month as Kintetsu’s “1234” campaign. 15,000 were released in pairs with another card that promoted the railway itself. Their combined cost was 2000 yen (about $20) and could only be purchased from Kintetsu stations.

In May of 2000, a specialty shop named Anime World Star commissioned six pieces of original cel art from Keisuke Masunaga, character designer of the Playstation Games. The art would be sold in several different forms, including phone cards, lighters, numbered prints, and pencil boards. One of those images is shown above left; see all six of them in our galleries for TV Series 1 and the Yamato movie.

That same month, Unifive made an all-purpose carrying strap (shown above right) with a metal Yamato mascot.

In the pre-cel phone era of the early 1990s, telephone cards swept through Japan like a typhoon. And of course, everywhere you’ve got a flat, blank surface there’s a licensing tie-in waiting to happen. Yamato phone cards appeared before 2000, of course, but others specific to Leiji Matsumoto’s many creations were quick to follow. 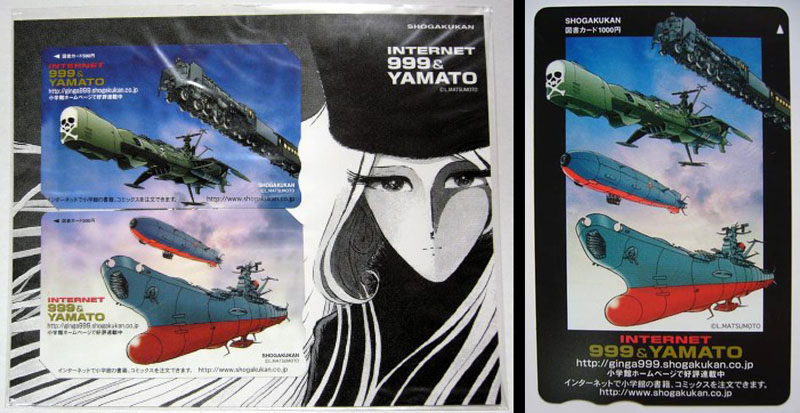 Shogakukan, always knowing a good promo when they saw it, threw their own weight behind a tie-in with Matsumoto’s Great Yamato with the cards shown above.

“Beat Mania” (Bemani for short) was a mega-popular video arcade game series released by Konami, which was accompanied by a broad lineup of console and handheld versions. The game worked a little like Tetris, but used descending musical notes rather than blocks. As these games expanded they began to incorporate anime theme songs, and that’s where the Matsumoto connection comes in. This was the third in the “Bemani Pocket Series,” a game called Anison[g] Mix 3. Released in the summer of 2000, it contained themes from Yamato, Galaxy Express, Captain Harlock, and other Matsumoto titles. The skull and crossbones emblem was specific to this game.

See another game from the “Pocket Series” (devoted to Mazinger Z) in action here. 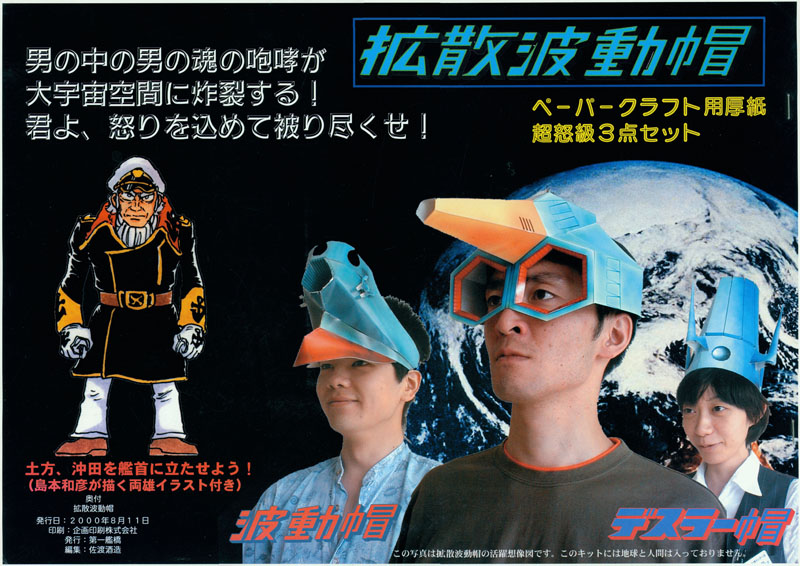 Quite possibly the weirdest Yamato collectible ever came out in August 2000, a set of papercraft “Wave-Motion Hats” made by a little-known (probably fly-by-night) company named “First Bridge Deck.” Printed on heavy card stock, the illustrated pieces could be cut out and assembled into a Yamato hat (with a cartoon figure of Captain Okita), Andromeda hat (with Captain Hijikata) and Dessler Battleship hat (with Dessler). The complete lack of Yamato logo might nudge these into the bootleg category, but who cares. Something this wacky deserves legit attention.