Yamato 2202 came to its thunderous, heartfelt conclusion when New Star Chapter was released March 1, 2019. The final showdown with Gatlantis added new dimensions to the story that began in 1978, making good on the promise to reinterpret it for a modern audience. Here are the highlights of episodes 23-26!

CLICK HERE to listen to Episode 124 of the Speaker podcast in which host Gwyn Campbell and Cosmo DNA editor Tim Eldred discuss Chapter 7 scene by scene. 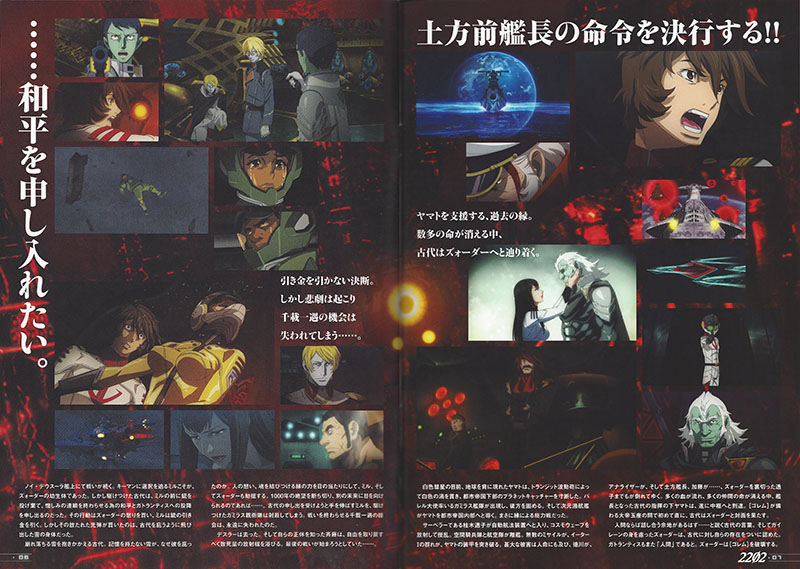 The decision is not to pull the trigger. However, tragedy occurs and the opportunity of a lifetime is lost…

As the battle continues on board the Neu Deusuler, Keyman is pressed to make a choice by Miru, who is a young clone of Zordar. But Kodai rushes in and drops his gun before Miru, offering to make peace and end the chain of hatred with Gatlantis. However, a shot is released…and it is the body of Yuki that leaps out to protect Kodai.

Kodai embraces the fallen Yuki. She has no memory of him, so why did she protect him? Through Miru’s eyes, Zordar sees the power of the edge that connects people, and he is shaken. Perhaps he does not fully understand love after all. If he can just release a thousand years of despair and turn his attention to a different future…

Miru reaches out to accept Kodai’s offer… but the Garmillas guard rushes in and shoots him dead.

Dessler departs, leaving his nephew behind with a world of regret. The opportunity of a lifetime to end this battle is now forever lost.

Saito, now knowing the true nature of his predicament, exposes himself to a lethal dose of radiation to regain his freedom.

Meanwhile, Gatlantis has reached Earth at last. As Zordar’s ships rumble triumphantly over the terrified heads of his new subjects, the last battle is about to begin…

Episode 23 notes
(from the video booklet)

The classic confrontation between Dessler and Kodai in Farewell to Yamato undergoes different developments with Keyman and Miru taking the stage. This callback to a famous scene becomes a true height of 2202.

It is revealed that the character of Miru, with his telepathic power, is a juvenile version of Type Zordar.

The composition of Kodai holding the wounded Yuki is the same as in Farewell. Also, in the scene of the White Comet Empire pressing Earth to surrender, a child reminds everyone of Yamato, which was another famous scene in Farewell.

Carry out the order of Captain Hijikata!! Yamato is supported by past relationships. After many lives are lost, Kodai reaches Zordar.

Yamato appears before the White Comet and pierces through its white vortex with the Transit Wave-Motion Gun, shredding the planet catcher in the lower part of the city empire. A Garmillas fleet led by Ambassador Varel emerges to fortify the rear. The dimensional submarine corps leads Yamato to the interior of the city empire. It is indeed total war.

Touko Katsuragi, who is also Sabera, enters the automatic navigation system and projects a Cosmo Wave to clear the way. The space cavalry and air squadrons are released. Countless missiles and swarms of Eater I’s break through Yamato’s armor. There is serious loss of life: Tokugawa, Analyzer, Kato, and Captain Hijikata…even Katsuragi falls after betraying Zordar.

While much blood flows and many friends lose their lives, Yamato finally reaches the core under the command of Kodai, who has now become the captain.

Kodai faces Zordar for the first time in the Great Emperor’s throne room, which is filled with the Golem self-destruct device.

If we are human, Kodai explains, there should be room for discussion. Standing over the dead body of his elder clone Gairen, Zordar finally acknowledges his existence to Kodai.

Gatlantis is also “human.” With that revelation, Zordar destroys the Golem to find out just how “human” he is.

Episode 24 notes
(from the video booklet)

Frakken and the Dimensional Submarine UX-01, who opposed Yamato in 2199, reappear as allies. Among the crew members saluting on the bridge is Sukeji Yabu, a former crew member of Yamato.

Tokugawa’s last words are “Engine output is out of control” because the output has not decreased, but is instead building toward self-destruction.

The cause of Hijikata’s death is a hit to the captain’s room, and a collapsing structure falls from the elevator shaft directly above him.

The automated navigation room is the most important facility on board Yamato. The technology of Iscandar amplifies the Cosmo Wave. 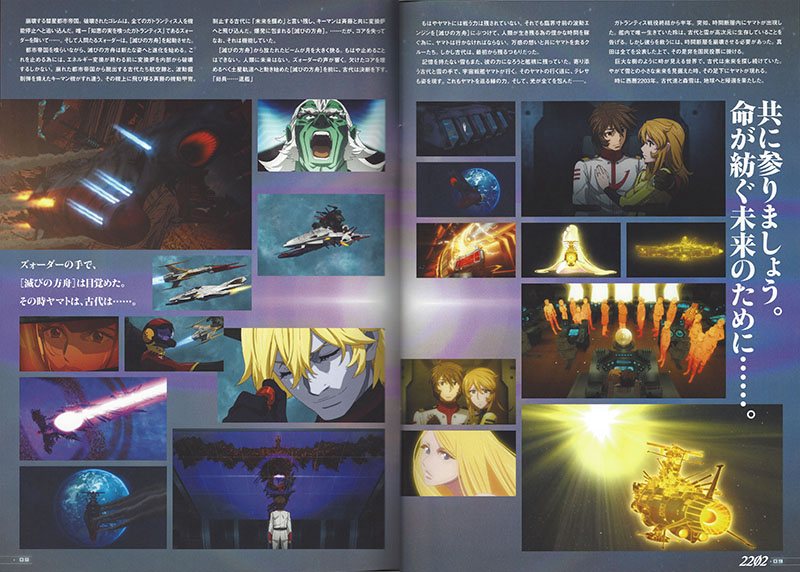 The Ark of Destruction is awakened by the hand of Zordar. At that moment, Yamato and Kodai…

The Comet Empire collapses. When Golem is destroyed, all the people of Gatlantis collapse…except Zordar. “Gatlantis has tasted the fruit of wisdom.” And Zordar the human being activates the Ark of Destruction.

As it consumes the city empire, the Ark of Destruction begins to evolve into a new form. The only way to stop it is to destroy the conversion furnace from the inside before the energy conversion is complete. Kodai’s air squadron escapes from the crumbling city empire, and is passed by Keyman’s fighter, equipped with a Wave-Motion drill missile. Saito’s mobile armor jumps onto its back.

Keyman insists that Kodai stay behind and “seize the future,” then slams into the conversion furnace with Saito. The Ark of Destruction is enveloped in an explosion… but is still functioning even after losing its core.

The Ark of Destruction releases a giant beam at the moon. It cannot be stopped. The voice of Zordar sounds. This is the end of humanity.

The Ark begins to move toward Saturn’s orbit in order to rebuild its core, and Kodai makes a decision.

Yamato no longer has the power to fight. But the Wave-Motion Engine is on the verge of going critical and can be rammed into the Ark of Destruction.

Yamato must attempt it to gain a little more time for humanity to survive, and Kodai instructs Captain Todo of the Ginga to proceed with her preordained mission. The crew leaves Yamato, filled with many emotions. But Kodai intended to stay on board from the beginning.

Yuki, who still has no memory, appears on the bridge to help him. As Kodai and Yuki embrace, Yamato advances. The Wave-Motion engine opens a fault into Teresa’s dimension, and she takes hold of the ship. This is the power of connections that Yamato creates. And everything is wrapped in light.

In the distance, an explosion…

Episode 25 notes
(from the video booklet)

The castle tower of the White Comet Empire is reminiscent of the huge bow of Zordar’s giant battleship. According to the original concept, it seems to have similar detail “with about 20 eyes.”

The scene in which Keyman and Saito approach the Ark of Destruction’s reactor and Keyman says, “Hurry and don’t hesitate, but be accurate” corresponds to the final scene with Saito and Sanada in Farewell. Writer Harutoshi Fukui says that in a way the character of Keyman was born and created backward from this scene.

The scene in which Keyman calls out to Yamamoto by name for the first time (out of “love”) seems abrupt, but was presaged in the drama CDs written by Harutoshi Fukui as bonus items with the Yamato 2202 DVDs and Blu-rays.

Let’s go together. Life unfolds into the future…

Six months have passed since the end of the Gatlantis war. Ginga eliminates floating lunar debris from Earth orbit as the time fault continues to generate new battleships, but it is an empty gesture since they have no new humans to crew them. They are devoid of spirit.

Suddenly, Yamato surfaces inside the time fault. She is in tatters. Kodai and Yuki are nowhere to be found. But one crew member lies unconscious in the still-functioning engine room: Yamamoto.

She revives and says that Kodai and Yuki are still alive in a higher dimension. Kodai has chosen not to return and Yuki has remained by his side.

They can be reached through the time fault, but the attempt will cause the time fault to collapse permanently. After everything is explained to the public, Sanada makes an impassioned plea not to betray those who saved Earth. Yamato’s crew is ready.

In a world apart from time and space, Kodai has been searching for the future. Teresa shows him many possible pasts and futures, but he is unmoved. Yuki, her memory now restored, pleads with him to come with her…but he is still unmoved.

He looks at Yuki, ready to let her go, and notices something; a child’s hand reaching out from hers, grasping his own. The future he has been searching for.

It is the year 2203. Susumu Kodai and Yuki Mori return to Earth.

Episode 26 notes
(from the video booklet)

At the start of planning, Mr. Fukui was told “to do a remake of Farewell, but keep the main characters alive,” and this final episode was written to solve that contradictory proposition.

In order to incorporate all of Space Battleship Yamato, the space in which Teresa dwells beyond space and time contains images of successive generations shown as possible events.

At the end, look for Dessler, Starsha and Melda on Iscandar, Yurisha and the prominent Garmillans Deitz and Hilde, the girl from the 11th planet, and the parent and child who believed in Yamato.