Back up to part 2 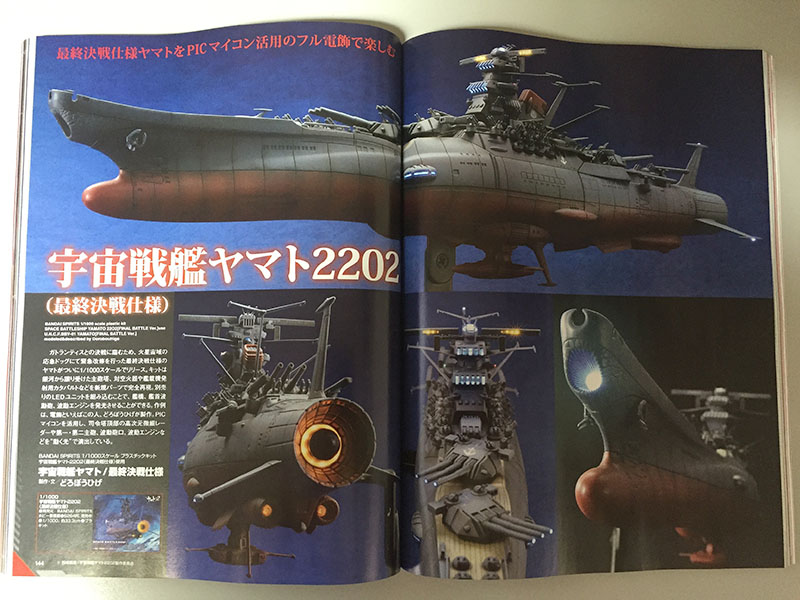 Hobby Japan devoted a generous 13 pages to 2202 in this issue that covered the two new Bandai models, gave a preview of the Soul of Chogokin ships, and featured an interview with Nobuyoshi Habara (read it here).

After the Monday night screening of Chapter 7 at the Marunouchi Piccadilly theater, a special prize lottery was held with a total of 100 items to be given away. 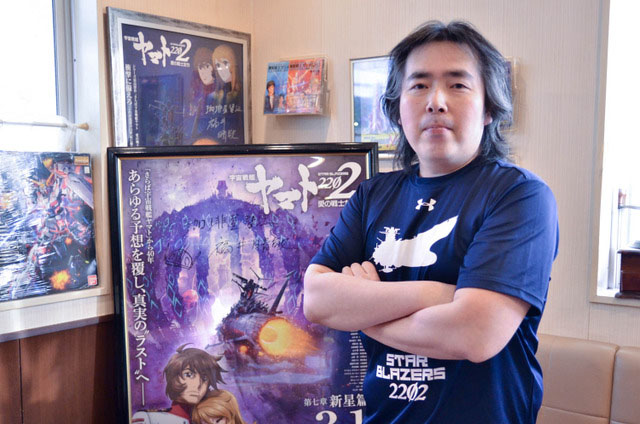 Until further notice, the last interview in the entire Yamato 2202 catalog was a conversation with Writer Harutoshi Fukui, published by Anime Anime.

There was only one identifiable part in this volume, a single hull panel. The rest were obviously for internal use somewhere down the road – including gears that will probably serve their purpose on the gun deck.

Members of the Yamato Crew Premium Fan Club get a nice renewal gift every year. This year’s gift was a brand new (and utterly adorable) Yuki Mori figure.

“Deform Yuki” stands about 5.5″ tall and comes in three colors depending on your membership level. Only her yellow uniform appeared on screen. 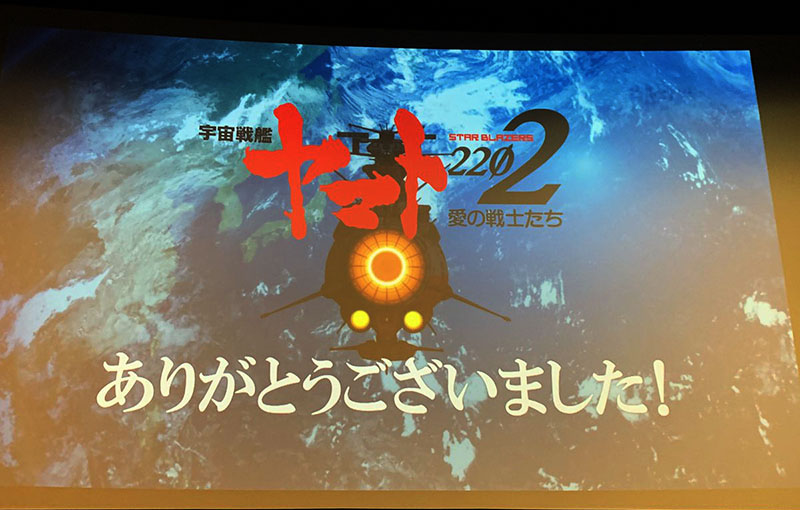 “THANK YOU VERY MUCH!” (Photo posted on Twitter by Giga)

New Star Chapter‘s final night in cinemas took place on Thursday, March 28. Habara and Fukui both appeared on stage at the Shinjuku Piccadilly with perennial host Osamu Kobayashi for a heartfelt sendoff. There was also an elephant in the room to be addressed: what next? As usual, the official 2202 website had it covered… 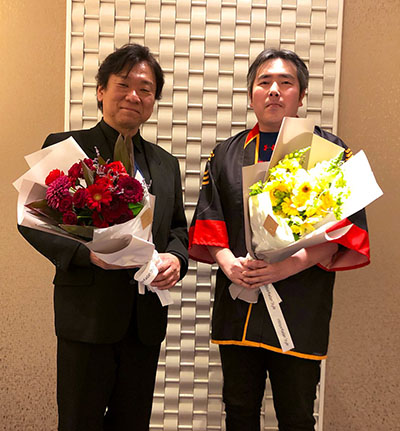 On March 28, a stage greeting was held for the final screening of Yamato 2202 Chapter 7 at the Shinjuku Piccadilly theater. It was the last of all seven chapters, screened over more than two years. Director Nobuyoshi Habara and Writer Harutoshi Fukui took the stage for this final screening date. It was an event that was decided in a hurry by the staff’s desire to convey thanks to fans who supported their work.

When these two have gone on stage for previous talks, they’ve often dressed alike, but this time Director Habara said, “I thought I should come in a suit.” Dressed in his usual happi, Mr. Fukui quickly accepted his role as the straight man by saying, “Well, if you had told me beforehand…”

They proceeded in a more casual atmosphere than usual, talking about making a local pilgrimage for Chapter 6 where they high-fived the audience, and mentioning their attempt to reach the Sanuki Film Festival in February 2018 when the weather got worse and stopped them from attending. The topic ranged around the various stage greetings they attended all over the country for each chapter. During this, a surprising fact was revealed. On the morning of the advance screening for Chapter 7 (February 18, 2019), Director Habara fell off his bicycle and cracked three ribs. He didn’t want anyone to feel sorry for him or say “your local business trip is off,” so it seems he didn’t tell many staff members. Even Mr. Fukui was surprised at this. 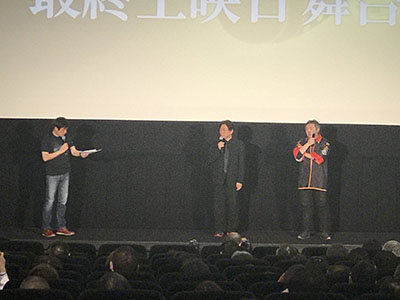 In the second half of the talk, they both discussed what it was like to work with each other in the beginning. About Mr. Fukui’s scripts, Mr. Habara said, “They were different from any script I’d worked with before. When I read it, it seemed like a novel. There was a lot of fascinating information, so it was a challenge to get it all into the [screen] time.”

Describing Mr. Habara, Mr. Fukui said, “First of all, this guy is a super animator. He has the sense of a live-action actor. That made it possible to do some last-minute drawing, which meant I could push to get something else in. Therefore, there was no blurring in the work. It really saved us.”

The end of this event brought a surprise. Daisuke Ono (the voice of Susumu Kodai), who had come to watch the screening in private, spoke out from his second-floor seat, which excited the audience. In response, Mr. Fukui said, “There’s a sense of a team participation (even in private), and it sums everything up when we go out on the last day with a full house.” 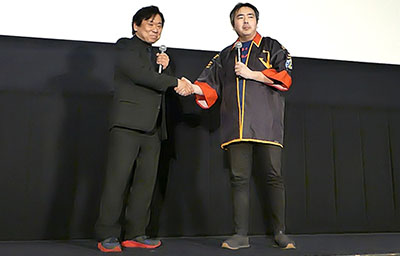 Mr. Habara added, “It started with the story that Yamato Resurrection might be made at Xebec studio. Through Resurrection, the Director’s Cut, Yamato 2199, and Yamato 2202, I’ve been involved in Yamato for more than ten years. I got the feeling again that Yamato is made by everyone: the staff, the cast, and the theater. And I think the various feelings I received from all the fans somehow made it into the film.”

To close the last stage greeting, Mr. Fukui said, “It’s painful to say the final farewell because there were so many good memories. Right now I’m just thinking deeply about Keyman’s last line, ‘I love this sorrow’.”

Mr. Habara said, “I can only express my gratitude. Since the series stretched on so long, I asked everyone at the start to enjoy watching it to the very end. Unfortunately, there were also some crew members who left us along the way. I think they’re watching us here today. Finally, I have a personal request at the end. Mr. Fukui, can I get a handshake?”

He said that when he looked back, he realized they never shook hands when they were working together, so the last of the seven chapters in the series ended with the first handshake of two people. 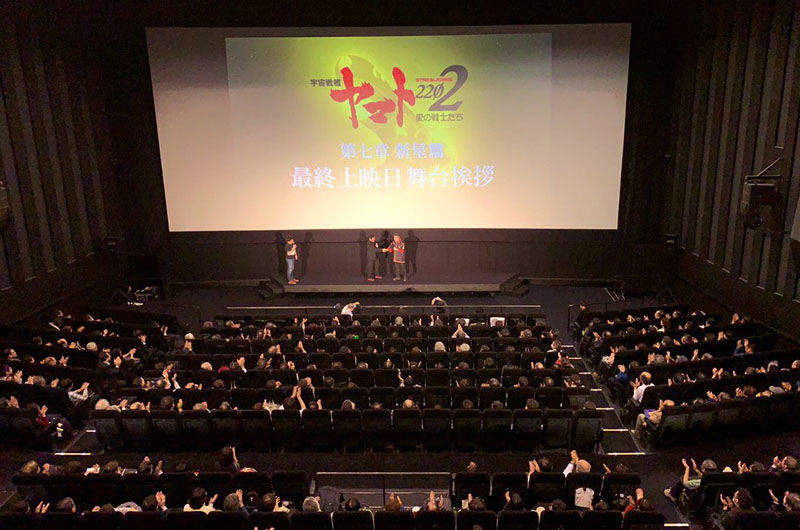 And now, the elephant in the room… 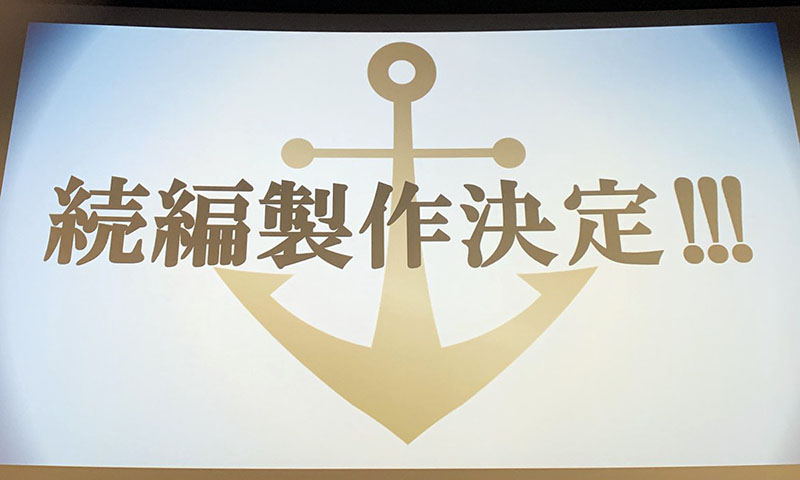 SEQUEL PRODUCTION DECIDED!!! What will it be about? When will it be out? Nobody’s telling. But we’ve been here before. We know how to wait.

As if that wasn’t enough, it was also announced that a live Yamato 2202 concert will be held in the fall. Which means the story of 2202 music is not yet over. 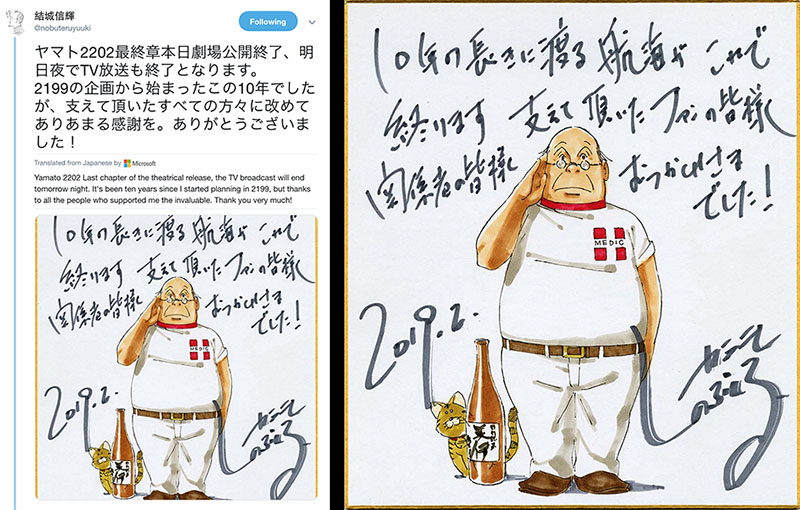 Character Designer Nobuteru Yuuki gave his own unique salute to fans with this message: ”The last chapter of Yamato 2202 has ended in theaters and the TV broadcast will end tomorrow night. It’s been ten years since I started on the planning for 2199, and thanks to all the people who gave me their invaluable support. Thank you very much!

In late February, the first Mecha Collection-size Earth Dreadnoughts appeared in packs of two. If a single is more your speed, you’ll only have to wait until June for a reissue in standard colors.

It will also come with a bonus item: clear “joint parts” for your 1/1000 scale models. Using them, you’ll be able to link two 1/1000 Dreadnoughts to a 1/1000 Andromeda for the TAG (Tug Around Galaxy) configuration. All you need is more models. Yep, that’s ALL you need right now.

Just when you thought there was nothing left in the chamber…KABOOM!

The ship comes with a large remote control loaded with functions. It rotates the gun turrets and controls lighting. Sound effects happen in response to these actions, including newly-recorded character voices for Kodai, Yuki, and Shima shouting relevant commands. Bandai’s name for it is “Motion React Sound System,” and it won’t be the last time we hear about it. 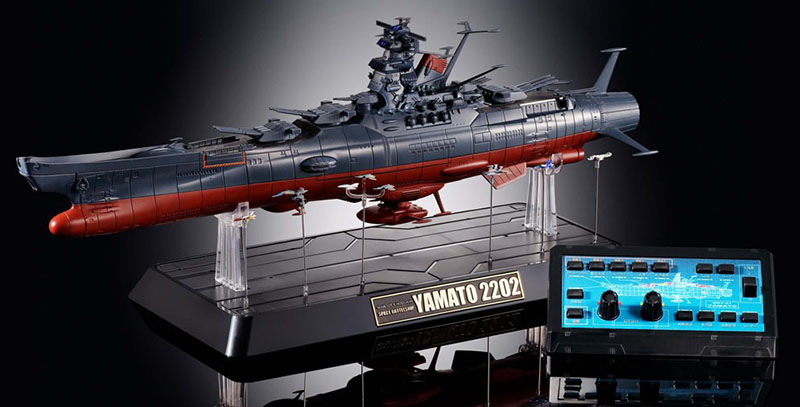 Also included are removable wings, rocket anchors, and seven miniature craft including the Cosmo Tiger I and Keyman’s Czvarke.

Want to see more? Get comfortable… 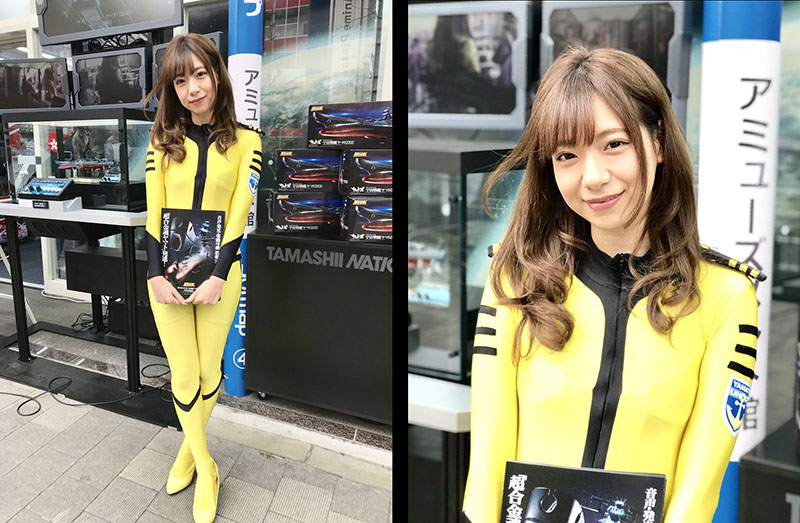 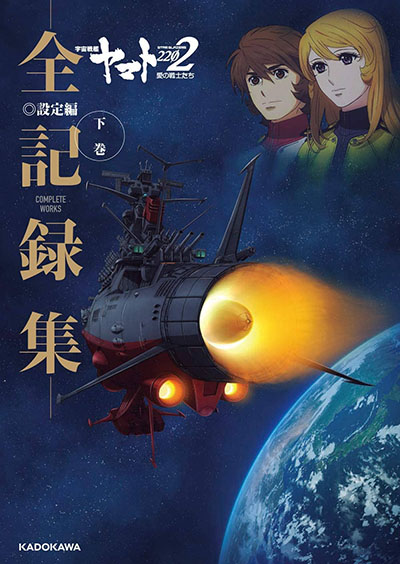 Continuing the extravagant sendoff, the second volume of the Complete Works set arrived on this day, and a handsome volume it is.

At 176 pages, it’s slightly longer than Volume 1 and picks up where it left off. Whereas Volume 1 spent all its time on the characters and mecha of Earth, this one delivers everything from the Gatlantis and Garmillas factions. But there’s still plenty of Yamato/Earth material as well, covering everything that was seen in the last two chapters.

In retrospect, since Volume 1 appeared in stores on the eve of Chapter 7, including this material there would have been spoileriffic, so the delay makes perfect sense in retrospect.

The bulk of Volume 2 is devoted to characters, mecha, and background art in both black & white and color. A few story pages cover Episodes 14-26 with staff interviews and promo art filling the remaining space.

Just like clockwork, the TV broadcast hit the finish line just one day after Chapter 7 closed in theaters. In Earth, Yamato is… we get an entirely new dimension (literally and figuratively) that had never been part of Farewell or Yamato 2. Six months after the war, the family tries to come back together.

This episode truly paid off Harutoshi Fukui’s intent to write a story for the Japanese generation that was “betrayed by the future.” His message to them was clear and distinct. (And will not be spoiled here.) It was a message that could only be delivered in a Yamato story, and no amount of description does it justice. You just have to see it for yourself.

See the trailer for the final episode here. 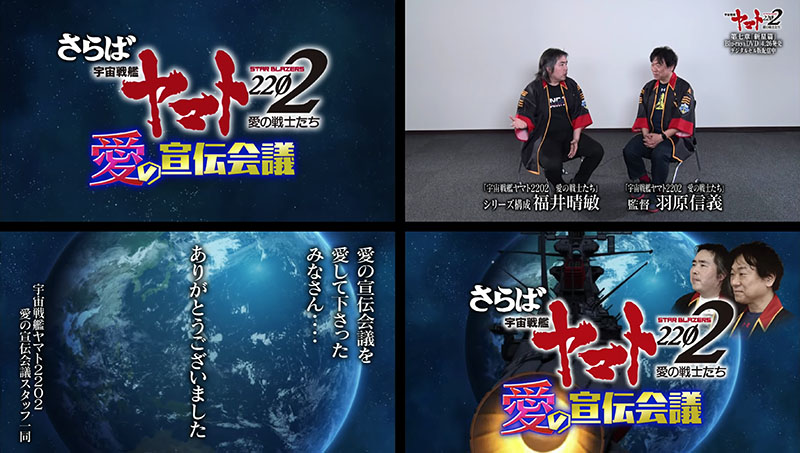 Okay, just ONE MORE and then they’ll stop. Really, this time.

On the morning of March 29, it was announced that Harutoshi Fukui and Nobuyoshi Habara had recorded one last talk show that would be released online just after the final episode finished on TV. It was an impromptu conversation about how far they’d come and what it all looks like from the tail end of their 2202 experience. 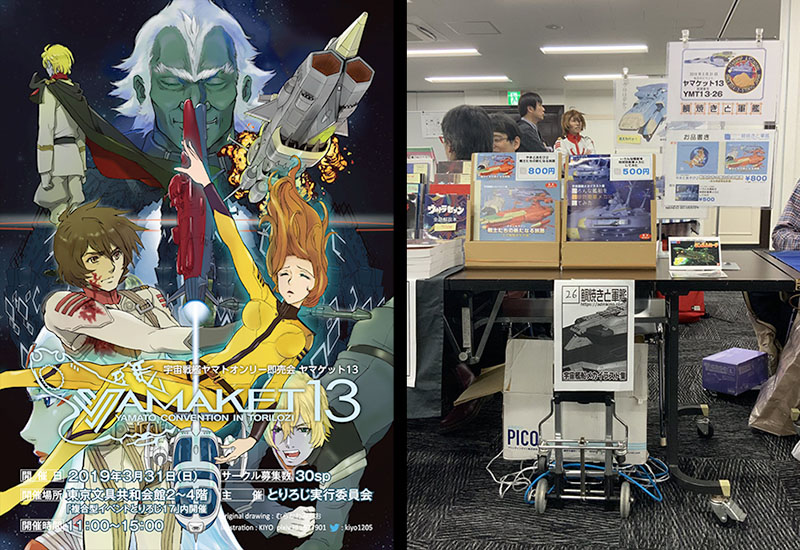 And now, back to the fans. With an unmeasurable gap until the next Yamato story, it’s up to the fans to keep the torches lit…and there’s no one more capable of this than the Yamaket gang.

You’ve heard about them many times in these pages. They turn up at the twice-yearly “Torilozi” fan event in Tokyo. Yamaket is short for Yamato Market, a mini-con specializing in doujinshi and other fan-made goods.

A photo gallery of their 13th gathering can be found here. 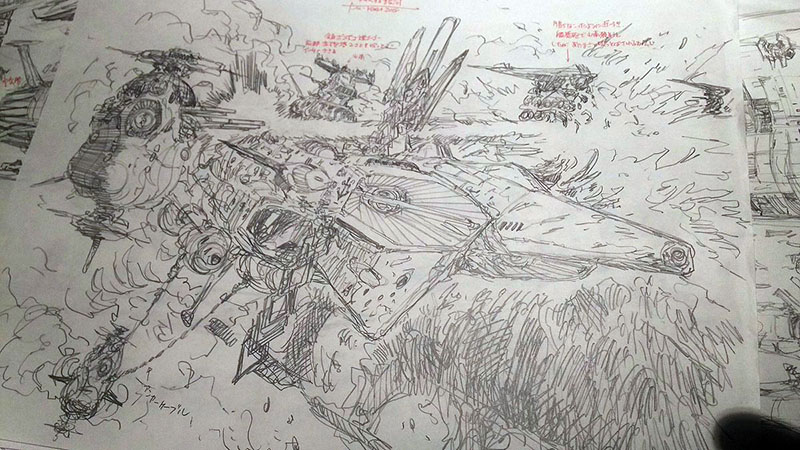 Model kits and previously unseen artwork continued pouring out of Kobayashi’s studio in March, which hopefully means he’s organizing it for the next volume of his Hyperweapon book series. Meanwhile, visit his Twitter page here and see a gallery of his latest posts here. 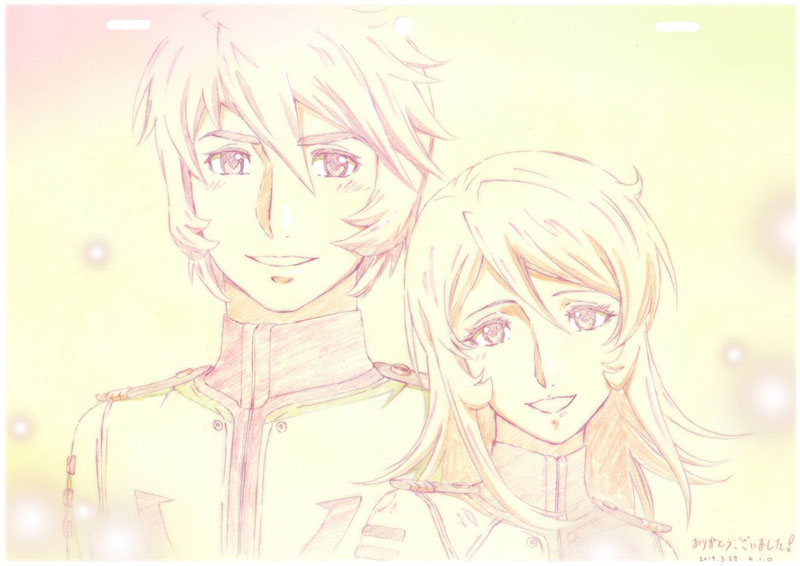 For many months, 2202 animation artist “Edakio” has been sharing work directly from his drawing board, and a gallery of March images – all connected to the finale – can be found here.

He also did us the favor of putting all of his 2019 posts into a single Twitter album, which can be found here. 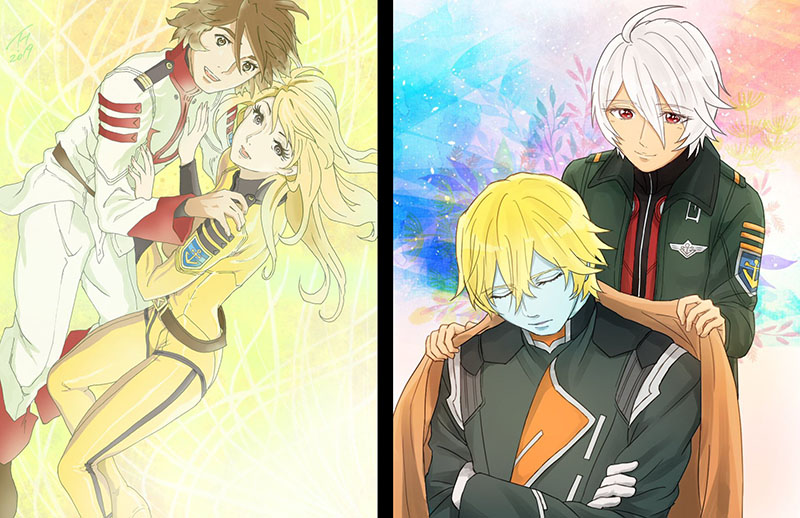 Fan artists were all over the map in March, saying goodbye and thank you in their own ways.

See a gallery of their works here.

Model builders have been off-leash pretty much since 2202 began, and they’re still making with the shenanigans. See a new gallery here, which goes to alternate dimensions and finds models that never existed. 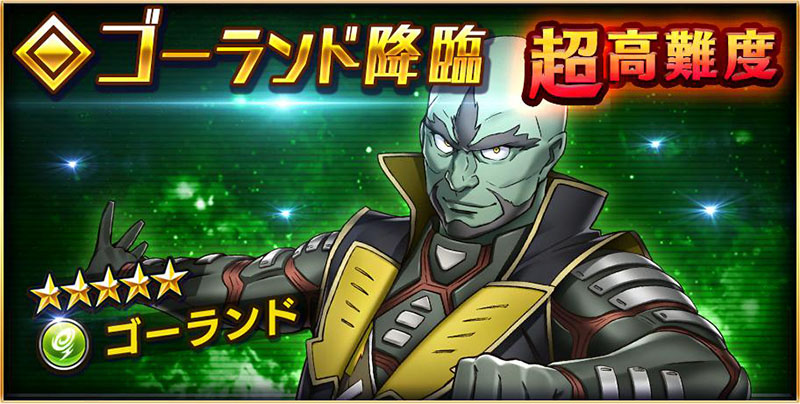 The Hero’s Record mobile game is likely to go on for as long as fans want it. See a gallery of promo art posted in March here.