Everyone remembers the beginning of the first TV series in which the ships of Earth find themselves hopelessly outmatched at the battle of Pluto. Nevertheless, Japanese modelbuilders took these obsolete vessels into their hearts and gave them the attention they’d earned. 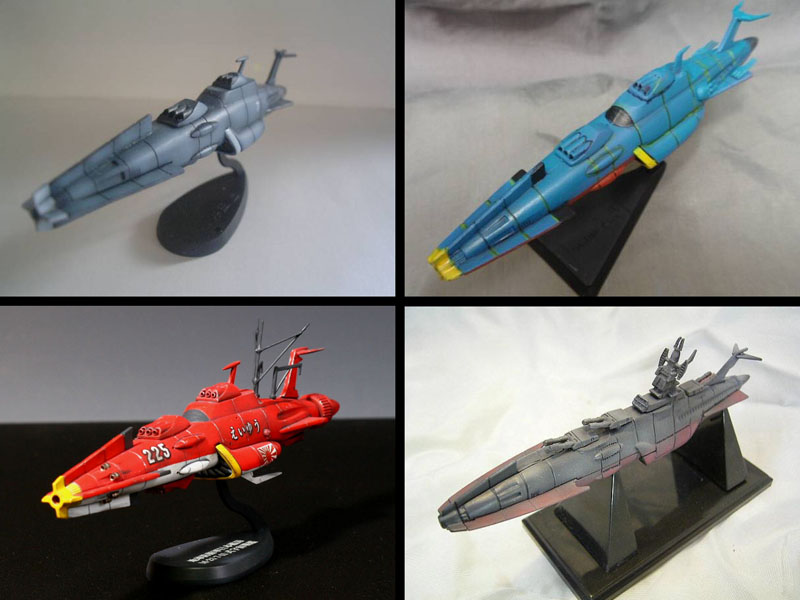 Starting with Captain Okita’s flagship 227, we have three versions of the Bandai “Mecha Collection” model kit and a mashup that combines the Plex “Mechanic Collection” toy with the superstructure of another EDF ship from Final Yamato. See a gallery of these kits here.

Alex Wildstar’s Paladin (called Yukikaze in Japan) has become a fan favorite over the years, even turning up as the lynchpin of the Playstation 2 games in 2005. Here is a repainted version of Bandai’s “Mecha Collection” model and a super-sleek modification of Wave’s 1990 garage kit. See a gallery here.

“Kitbashing” is a common term for taking bits of one model and combining them with another. In this case, the bow of the Yukikaze has been “bashed” into the stern of Okita’s flagship.

For modelers, the absolute highlight of Farewell to Yamato (and the second TV series by extension) was the flood of exciting new mecha designs as seen in the freshly-refurbished EDF fleet. Bandai made the most of this, issuing model kits of every one of them and opening the doors to all manner of interpretation.

Andromeda has always been the reigning king of the EDF lineup and thus gets the lion’s share of modelers’ attention. We start with some slight modifications of Bandai and Imai kits both large and small. The 1/700 Bandai kit actually came with its own internal lighting, which rang the dinnerbell for creative modification. See a gallery of several kits here. 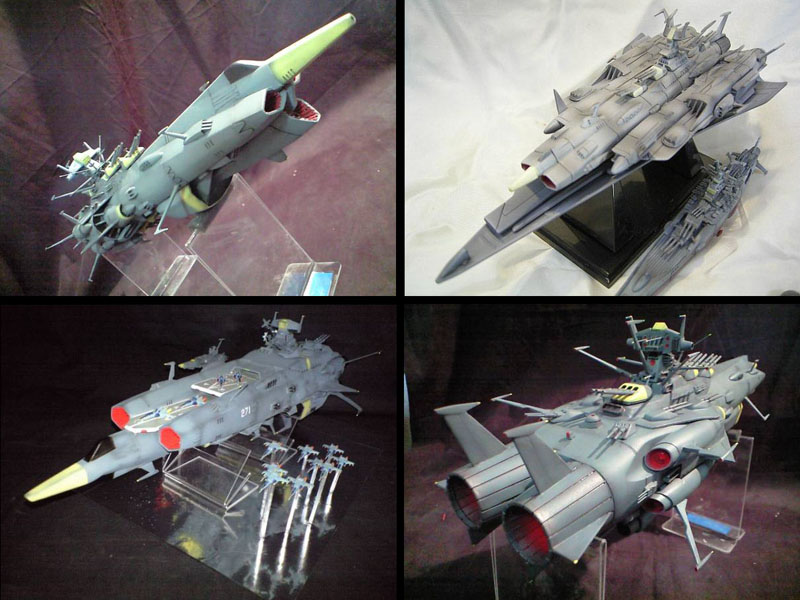 Over time, the attempts to modify Andromeda became ever bolder, especially when a radically souped-up twin-engine version (called the Shunran) appeared in the Playstation 2 games and expanded everyone’s creative license. See a gallery of heavily-modded Andromedas and Shunrans here.

The ever-reliable EDF Battleship is next on the list. These versions experiment with internal lighting, added detail, and a midst-of-battle action scene. See a gallery here.

With its flattop as an inviting canvas, the EDF Carrier calls out for modification, whether it be a simple repaint or a radical redesign. See samples of both here. 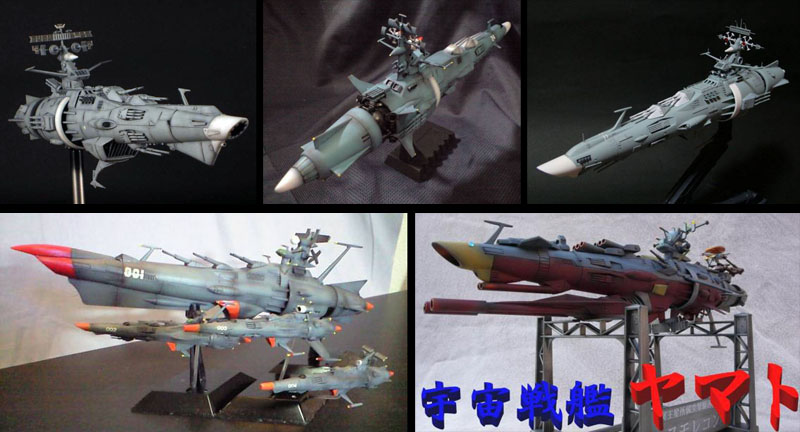 Bandai’s EDF Battle Cruiser was issued at a fairly large size, which invited modelers to take it in all sorts of directions. See a gallery of four different versions here.

Some modelers take paths of their own making, creating EDF ships that never actually existed such as this hybrid of a Battle Cruiser and a Destroyer, seen here alongside Bandai’s “Mecha Collection” kit of the Destroyer as it appeared in the anime.

Here’s another radical modification using the EDF Destroyer as a base and creating a whole new kind of Wave-Motion Gun. 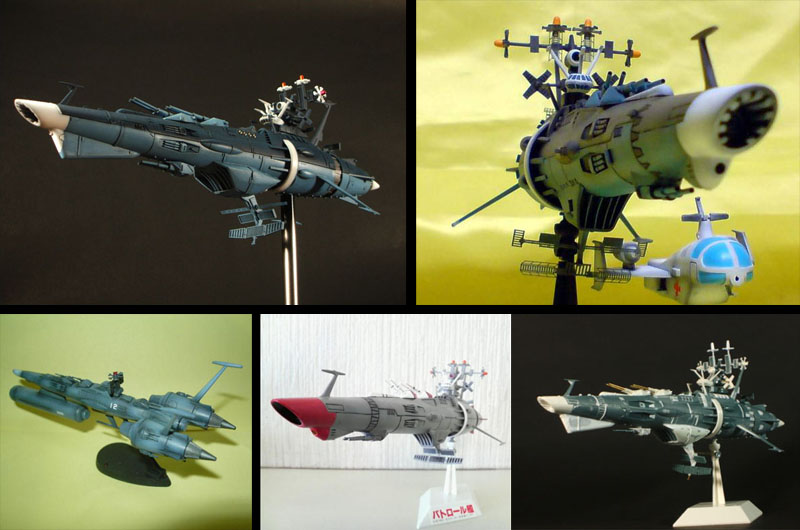 The Patrol Cruiser, seen under Kodai’s command at the start of Farewell to Yamato, bristles with antennae that seem dialed directly into the frequency of a creative modeler’s brain. Here are some examples of what can happen when that call is answered. See a gallery here.

The Playstation 2 games did a lot to expand the concept of the EDF fleet in the post-Comet Empire timeframe. Farther up the page we saw the Shunran, and here are two more examples. The idea is that the EDF capitalized on Comet Empire technology to upgrade their own ships, and the digital “kitbashing” in the game has been copied here in plastic. The ship at left is named White Piker and the one at right is White Scout. 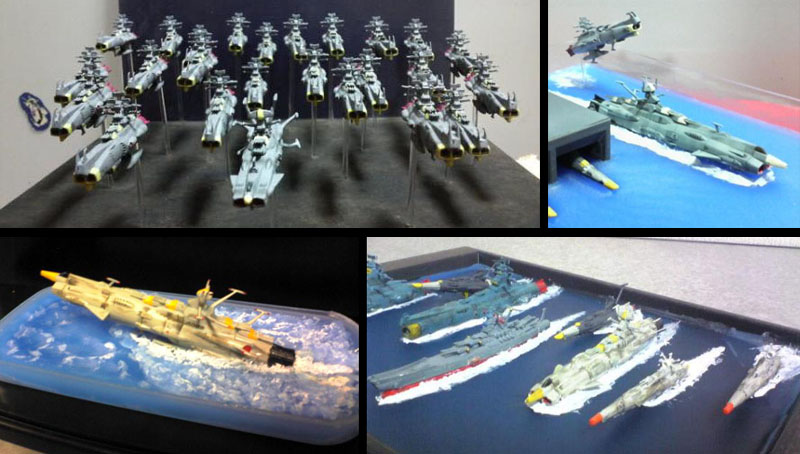 With so many ships to mix and match, dioramas that combine several of them into a single scene are a natural step to take–especially when you can just buy up a bunch of Plex’s “Mechanic Collection” toys and line them up into a mighty phalanx. See a gallery of dioramas using both toys and model kits here.

Be Forever Yamato brought two more ship designs into the fold, a pair of fully-automated battleships that, while easily crushed by the Dark Nebula’s space navy, gave modelers yet another EDF craft to play with. See a gallery here.

Final Yamato‘s EDF fleet consisted of just three new ship designs that, for one reason or another, never got commercially released as mass-market model kits. Some garage kits popped up to fill the void in later years, but it wasn’t until Plex released these ships in miniature “Mechanic Collection” form that modelers could have at them with reckless abandon. See a gallery here.

With so many models to choose from, it’s easy to forget about Yamato 2520, which is just as capable of a classy upgrade as anything else in the lineup. Here’s a 2520 kit with some added detail. Read all about the short-lived video series here.

Finally, we close with a trio of kit-bashed hybrids made up of so many parts from so many different EDF models (not to mention other anime ships entirely) that they’re impossible to classify. This is what happens when a room fills up with glue and paint fumes.

Continue to the next collection: Enemy Spaceships