Describing Space Battleship Yamato‘s mechanical design as “prolific” is like referring to the ocean as “damp.” For every one of the numerous enemy empires who wrongheadedly picked a fight with Earth, a whole new aesthetic had to be created and worked out in painstaking detail to make every single spaceship unique and yet easily identifiable as part of a larger body. This is the key to successful mechanical design, as Yamato‘s world-class artists demonstrated over and over.

When those same spaceships evolved from the 2D world to one of 3D, the modelers took over where they left off.

Starting with the worst of the worst, we have two examples Zordar’s Dreadnought in all its nasty, black glory. Bandai made two versions of this ship, small and large, both of which have been augmented by internal lighting. See a gallery here.

Digging into the rank and file, we find what appear to be scratch-built versions of two Comet Empire ships, a destroyer and Naska’s single-deck carrier. These could be garage kits, but evidence is elusive. At the far right is the “Devastator” fighter (renamed “Scorpion” in Star Blazers), modified with a AWACS-style electronics package. The fighter was a bonus kit that came with Bandai’s EDF Battleship.

See a gallery of these kits (and others) here.

The manufacturer of this garage kit is unknown, but the care that has gone into the building of this Comet Empire battleship certainly demonstrates the most attention this vessel has ever gotten in three dimensions.

Next up are three versions of the Anti-Matter Missile ship commanded by General Goland (renamed Torbuk in Star Blazers), all based on the larger Bandai model: a “detailed-up” version and two more modified with extra ordnance. See a gallery of all three here.

Kitbashing is all about slapping stuff together from different sources to synthesize something entirely new. Here’s just such an effort, throwing pieces of just about every Comet Empire ship together into something bigger and nastier than the sum of its parts.

Then there is the ambitious task of modeling the Comet Empire itself, the wandering city of Gatlantis in all its formidable pneumatic-tubbed detail. This version is 11 inches in diameter and lights up nicely.

The first Gamilas vessel we ever see is the Destroyer with its distinguishing prow, looking like a deep-sea fish transplanted to outer space. (Strangely enough, we never saw what those two big apertures do, since they never fired a shot.) There were three different types shown throughout the first TV series, so modelers in Japan took it as an open invitation to create more. They were also inspired by an early jungle-camouflage color scheme that didn’t make it to TV since it would have been too hard to paint (and, for that matter, would have been entirely useless in outer space). See a gallery of several different examples here.

Gamilas fightercraft have never gotten much love from Bandai, since none were ever rendered as mass-market plastic models. This left modelers with two options; either seek out a garage kit or scratch-build one yourself. The origin of this Gamilas patrol fighter from Series 1 is unclear, but you can’t argue with the results.

For some reason, Gamilas command vessels were scarce in the early years since Bandai didn’t make model kits of any of them. Other manufacturers filled the void much later with garage kits and miniature toys. Here are two examples: a modified version of Shulz’ flagship (General Ganz in Star Blazers) released by Plex and a detailed-up Domelus III garage kit from Wave. In case that name doesn’t register, it was the high-speed command ship General Dommel [Lysis] used on Planet Balan. See a gallery here. 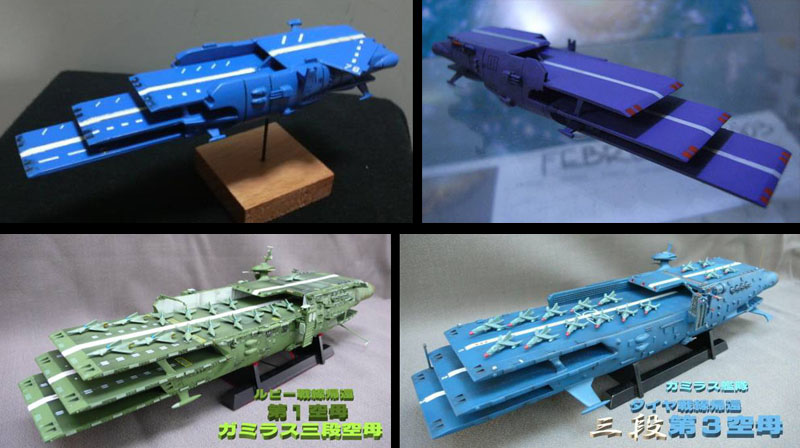 Next to the Destroyer, the other Gamilas ship that seems to get the most attention from modelers in Japan is the Trideck Carrier seen in the pivotal battle of Rainbow Star Group. Again, there were three different color variants in the TV series, which inspired fans to take it farther. See a gallery of several different examples here. 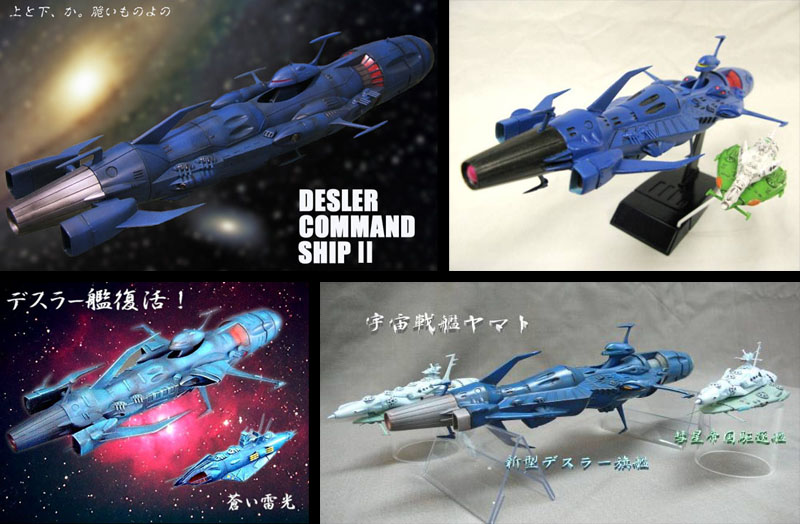 Desslok’s Battleship is unique among all others for having a visible evolution in the first two TV series. His first was destroyed at the end of Series 1, of course, but his comeback in the Comet Empire storyline brought us a souped-up “Mark II” version with the teleportation pods on its bow. Much later, an even more souped-up and decidedly more sinister redesign of the “Mark II” appeared in the Playstation game for Farewell to Yamato. Bandai released the “Mark II” in both small and large scales, and ambitious modelers jumped at the chance to modify it into the PS game version. See a gallery of their work here.

The next ship personally commanded by Desslok was the red Battle Carrier seen in The New Voyage. Of course, it had previously appeared in Series 1 in the battle of Rainbow Star Group–it was the ship that launched the infamous drill missile. When Bandai released large and small models of it to coincide with The New Voyage, it gave modelers a chance to work up their own personal variations. See a gallery here.

This version of the battle carrier requires some explanation. At the end of the Comet Empire Playstation game, fans got a nice little Easter Egg; Sabera [Invidia] manages to escape the ruin of Gatlantis in her own personal ship. She thinks she’s got it made, but Dessler [Desslok] suddenly appears in this bruiser to inform her otherwise. He’s lashed the wreckage of his battleship to his remaining battle carrier and rewired the prime weapon. With it, he exacts his revenge on her for that little prison incident. Because nobody messes with the blue guy.

With all the requisite Gamilas ships to choose from, dioramas would be an easy prospect as demonstrated by these two versions of the sea battle on Iscandar from The New Voyage. See a gallery here.

The top dog in the Galman fleet seen in The Bolar Wars is Desslok’s massive flagship. Its bridge is the size of a palace and Yamato could almost be engulfed by its bow cannon. This makes it the saga’s second largest spaceship, since it’s about 1/7 the length of Zordar’s Dreadnought. Bandai released it in both small and large versions, which fans have modified as they see fit. See a gallery here.

Two other Galman ships got twin releases from Bandai, the Battleship and the Battle Carrier, both of which are available in large enough sizes to be nicely detailed. See a gallery here. 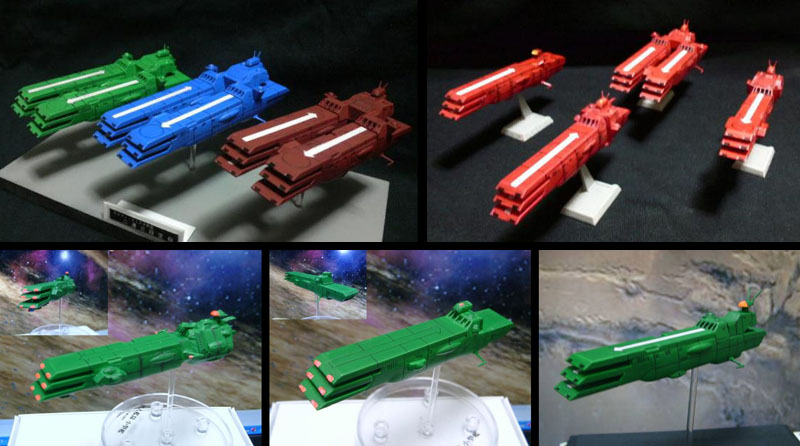 Another notable Galman ship is the massive Twin Tri-Deck Carrier, a double-wide version of the Gamilas Trideck Carrier. Bandai only released it as a miniature “Mecha Collection” model, but that didn’t stop fans from customizing it however they liked. The Bolar Wars series also featured a Galman Trideck Carrier that looked like a “split” version of the mothership, so skilled modelers took up the challenge to try the same thing in 3D. See a gallery of both the Twin and “split” versions here.

Had the third TV series run its full length, Bandai would undoubtedly have released more model kits from it, presumably including a large version of the Twin Tri-Deck Carrier. But since history went another way, fans had to scratch-build their own versions if they wanted to fill out their Galman collections. See a gallery of the results here.

Wrapping up this section, we have this pair of unholy mashups (above and below). Both combine bits of Gamilon, Galman, and Comet Empire ships into something that might give even Yamato a run for its money if they actually turned up in the anime.

The number of Bandai kits dedicated to the Denguil ships from Final Yamato totals exactly zero. The only new model released for that movie was a 1/1000 scale Yamato. It would be up to garage kit makers (mainly Ndopara shop, profiled here) to come to the rescue two decades later. Thus, since neither of the ships in this final category were made by Ndopara, they are either garage kits made by other companies or, quite possibly, complete scratch-builds by modelers with considerable skill.

The first is one of the oddest-looking ships in the Yamato saga, the Denguil fighter carrier. See a gallery of photos here. 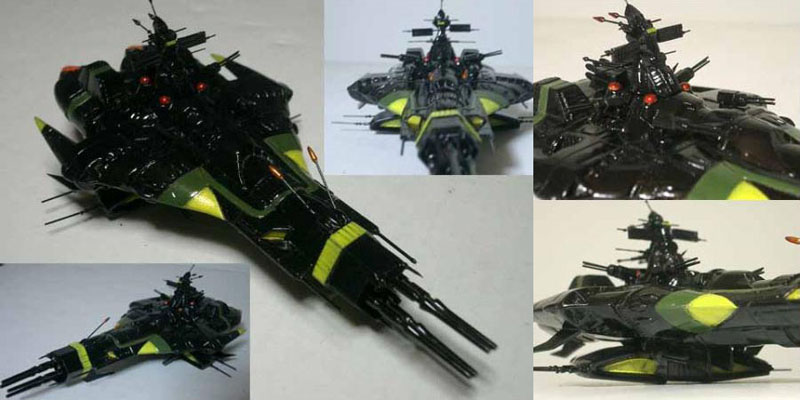 The second is a lovingly-built version of Lugal de Zahl’s command ship. Such DIY craftsmanship speaks volumes about the dedication of Yamato modelers and the impressive strides they have taken since the hobby of anime modeling took off to outer space in 1974. 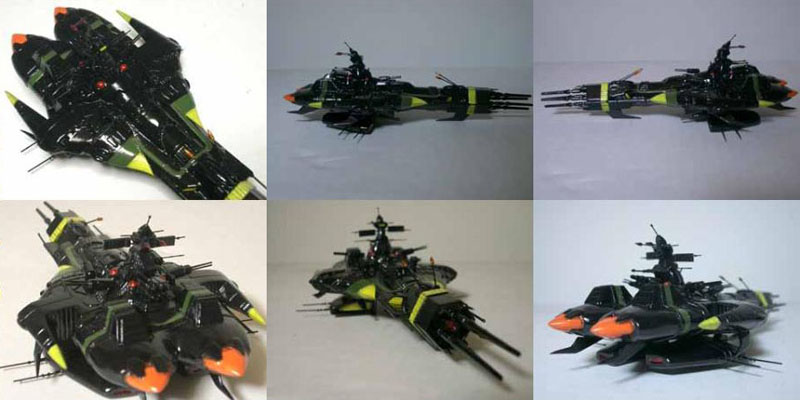