Anyone who indulges in the pursuit of vintage products eventually bumps up against a barrier that is simultaneously the best and the worst part of a collector’s hobby: the ultra-rarity. It’s the best part because it’s the most challenging level of “the hunt,” and it’s the worst part for exactly the same reason. It usually takes many years (and dollars) to conquer this obstacle, but the satisfaction is always worth it in the end.

Space Battleship Yamato collectors have plenty of rarities to hunt down in nearly all the categories; 45rpm singles, candy wrappers, pristine animation cels and the like. Of these, the most substantial (and the easiest to share on a website) are the rarest of the many, many Yamato books. (Read the full story of Yamato book publishing here.) With several years and a tidy sum of money behind me, I’m honored to provide this cover-to-cover look at the top five in this category. Age is only one factor in their rarity; as you will see, each also represents a unique facet of the total phenomenon.

Though not actually a book, this card-and-record set is the first publication dedicated entirely to Yamato (as opposed to magazines that covered it in the same timeframe). Japan’s Epoch toy and game company was founded in 1958 and is still in business today thanks to several lucrative tie-in products. The Family Picture Story Show was a huge library that combined an audio presentation with numbered picture cards measuring about 10.25″ x 7.75″.

There isn’t enough evidence to say conclusively that this set represented typical production values, but as far as Yamato products go, it could hardly be farther from the mark. The art bears only a passing resemblance to what was seen on TV screens, and small wonder–for this to have been published in the first month of broadcast, the artist who drew the 16 card images would have only had primordial production materials for reference. Similarly, the audio track on the record contains none of the music, sound effects, or voice actors from the series (though some of the actors did go on to greater careers afterward). Obviously, this placed even more barriers between a listener and the true essence of Yamato.

“Picture Story Show,” or “Kamishibai” in Japanese, is a now-defunct form of public performance art involving images on paper [Kami] presented in a live stage show [Shibai] with dramatic flair. Kamishibai was eventually replaced by television, but Epoch preserved it for a while with this plastic screen that the story cards would fit into. Basically, it stood about halfway between classic Kamishibai and TV anime, and must have lasted for some time since Space Battleship Yamato was volume 102 in a series. This series, too, is now extinct but remains an interesting artifact in the evolution of home entertainment.

See and hear it for yourself right now! For the first time since this product was published, the record and the card images can be absorbed as intended online.

Play the audio here: Side A | Side B

While that’s playing, open up this web page in another window and follow along with the 16 story images here. The first image is the outer slipcase cover. Scroll down to the next image when music begins, and scroll again when you hear the chime. Special thanks to superfan Dave Merrill for capturing the audio magic! 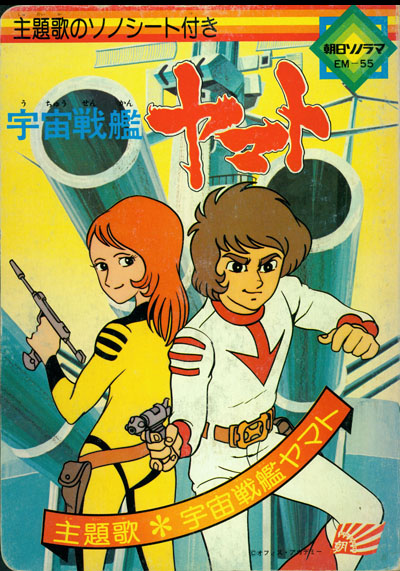 It’s quite possible that the artists who produced the card images for the Epoch set were called back into service by Yamato sponsor Asahi Sonorama to produce this 16-page children’s book, which hit a few of the high points of the first few TV episodes. Fans who picked this up early on would have gotten a minor sneak peek at what was to come. The studio credited for the art in this book, incidentally, is Hiromi Productions.

“Sonosheet” was a proprietary term coined by Sonorama for the flexi-disc records that came with many of their children’s books. The Sonosheet in this volume contained the show’s opening title song, which was marketed to the hilt in all sorts of ways. This, in fact, is one of the few early marketing strategies that worked as planned–though the show was not by any means a children’s anime, the music appealed to everyone.

See this book from cover to cover with a complete text translation here. 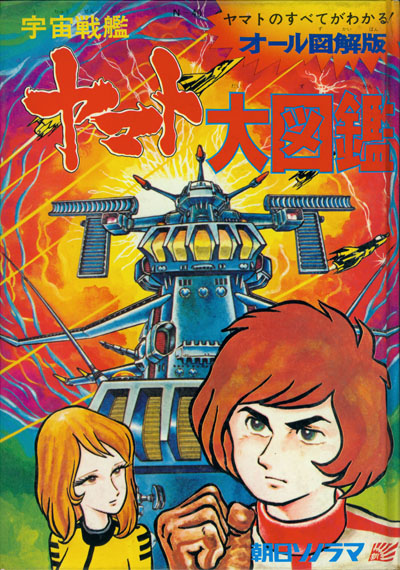 Although Yamato‘s original merchandising campaign was quite substantial (see a gallery of products here), almost all of it amounted to a critical misfire. Not surprisingly, most of the decisions were wrong because they were based on an old marketing model: anime was for children, so the products had to be, too. From its beginnings, Yamato was a break from that model. It was primarily made for teenagers, and indeed that’s the audience that ultimately embraced it. Unfortunately, the sponsors and licensors weren’t making products that appealed to teens and the ratings didn’t support the marketing model. Thus, the entire enterprise was fatally hobbled and the TV network responded by cutting the series short. This put Yamato into a long gestation period that ended with an astonishing cinematic comeback documented elsewhere on this website.

That’s a long setup to present this book as a pivotal turning point of the early years. Looking across the entire history of the saga, this was the first Yamato product that was true to the sensibilities of the anime itself. Packaged as another children’s book (with another Sonosheet record inside), it broke away from the previous two books by showcasing the work of Studio Nue, the talented design house that worked on the series. They were (and still are) true visionaries who saw the future of anime and captured it on paper.

Moreover, it included animation art from the show, which made it the first official source of stills a fan could have obtained. And it didn’t stop there; the Studio Nue artists graced it with one of the best “cutaway” drawings ever seen and also let their imaginations run wild on several pages to draw things that would never actually make it into the show. All these elements put together make this a fascinating milestone. Naturally, it didn’t sell well when it was originally published, but is now the Yamato book most treasured by serious collectors.

See it from cover to cover with a partial text translation here. 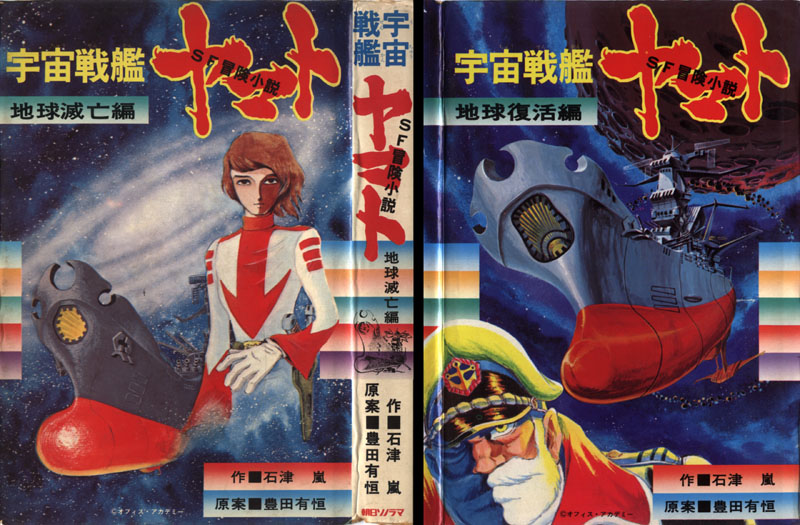 The lurid cover art on this two-volume set is only a hint of what awaits inside. Written and illustrated while the anime was in pre-production, it amounts to an alternate-universe version of the story in which the Gamilas’ planet-bombing campaign of Earth has inflicted deep physical and psychological wounds on the characters. The friendship between Kodai and Shima in particular is much more brittle and prickly.

Captain Harlock participates in the story, as good an indication as any that the writer took off and ran with an early draft of the anime storyline, and a member of the crew turns out to be a cyborg spy–another plot point that may very well have been part of the original mix.

The fateful message comes from Iscandar, but Yamato heads off to another planet altogether, named Bolzon. The people of that planet are pacifists who (like the followers of Queen Gardiana in The Bolar Wars) abandoned technology long ago rather than become shackled to it. They ultimately become Earth’s benefactor rather than a somewhat ambivalent Queen Starsha.

The illustrations in these novels depart even farther from the anime than the story itself, seemingly originating from a much earlier generation of SF stories for boys. It was one more example of older sensibilities being applied to a brand new anime program that would ultimately lay them to rest. Author Arashi Isuzu was previously a member of Osamu Tezuka’s studio, Mushi Productions, and was well-known as a mystery writer.

See a complete gallery of the illustrations here.

Read our complete translation of both volumes here. 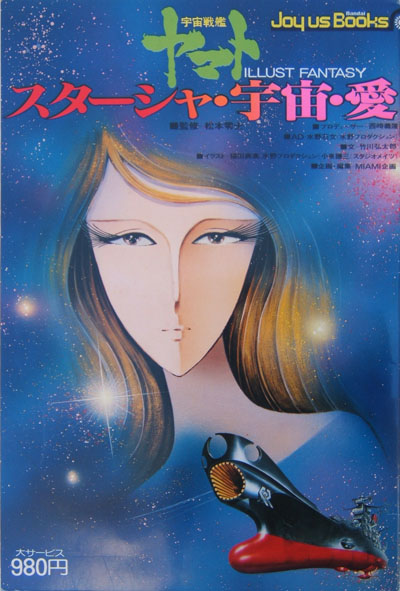 We end this roundup on the other side of the “dark ages,” almost three years after the initial marketing mistakes brought the first TV series to a premature ending. During that stretch of time, Producer Yoshinobu Nishizaki ultimately won the battle to bring it back, and his target audience rewarded his efforts by making the 1977 movie version into a blockbuster. After that, books and many other products flowed freely, but there was one very unusual title among them that would later drop into obscurity.

Starsha Space Love was another children’s book, a highly simplified 16-page look at the Yamato story from her point of view. Like the Big Picture Book, it was handled by an insider. Studio Mates was one of many participants in the production of series 1. One of its artists, Kenzo Koizumi, assisted illustrator Tenkou Fukuta in the making of 8 elaborate paintings that were reproduced in a giant 18″ x 24″ format, which made it the Imax of Yamato storybooks. Even today it’s still the record holder for square inches; only a couple of Yamato wall calendars have topped it.

Since it trailed the Yamato movie by a good six months and appeared just before the first wave of Farewell to Yamato products, it fell into a memory hole. Its artwork has never been reprinted, but is as striking today as when it was published.

As long as we’re in the realm of the extremely rare, here’s another treasure worth a closer look: a mini Yamato pocketbook released by Showa Note in 1974. 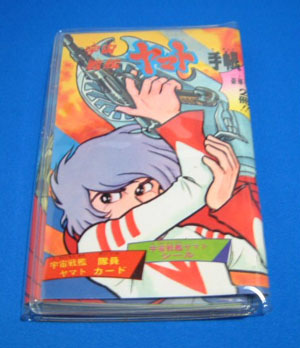 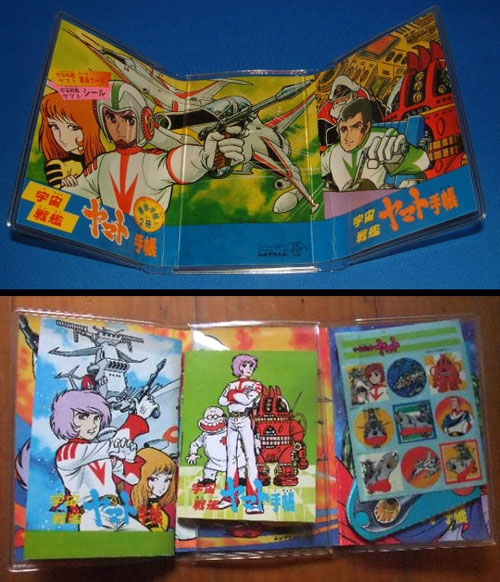 Measuring a little over 3″ x 5″ when folded, it was a fairly typical example of children’s stationery from the early 1970s. What makes
it a standout for Yamato collectors is the unusually high quality of its artwork, which
was never reprinted elsewhere. Most of the early products bore only a tenuous resemblance to the anime, but this one came quite close and demonstrated above average effort.

When opened, the plastic sleeve (with a 2-sided full color insert) reveals a collection of personal items inside: a foldout ID card, a small sticker sheet, and two mini notebooks that are filled with custom Yamato artwork. The style bears a strong resemblance to art that was created for monthly manga magazines of the era such as Adventure King and Terebi Land. Original pieces from both can be found in our Quest for Iscandar art gallery.

Click here to see a gallery of the art produced for this extremely rare collectible (20 images).