A new version of Dessler’s wine goblet was released in Japan, a co-production of two companies named Aoshima and Skynet. This is actually the second of its kind; the first was released in March 2008 from Bandai’s online Lalabit Market along with a bottle of “Dessler wine.” See it here. Another product released in October (shown above right) was a re-issue of Bandai’s acclaimed 17″ Soul of Popynica Yamato with lights, sound, and internal parts. See more information about it here.

The Yamato 2 pachinko game had run its course in first-run Japanese casinos by this time, but one more related product appeared in November. The Maitan company released a pair of gigantic tapestries featuring the game’s two signature images.

With Yamato Resurrection‘s premiere now less than a month away, Bandai reissued another of its most noteworthy model kits, the giant 1/350 scale Yamato. This time it was molded in silver-coated plastic to represent the “Reflector Shield” effect from the finale of the first TV Series. Read about the original kit here. See Bandai’s homepage for the new version here. 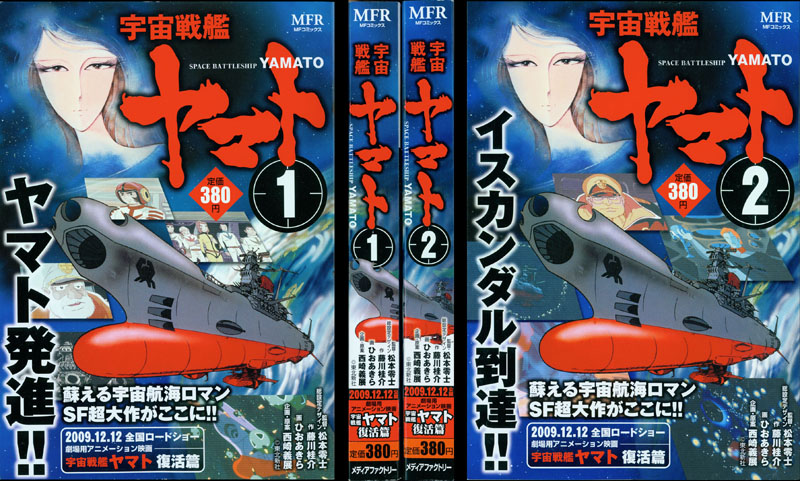 Another movie tie-in arrived when Media Factory began publishing new editions of Akira Hio’s original Space Battleship Yamato manga. His 1974 adaptation of the first TV Series was divided into two volumes which were published in November and December. A two-volume reissue of Farewell to Yamato followed soon after, and the entire series will continue to be republished throughout 2010. See our review of the Hio manga here. 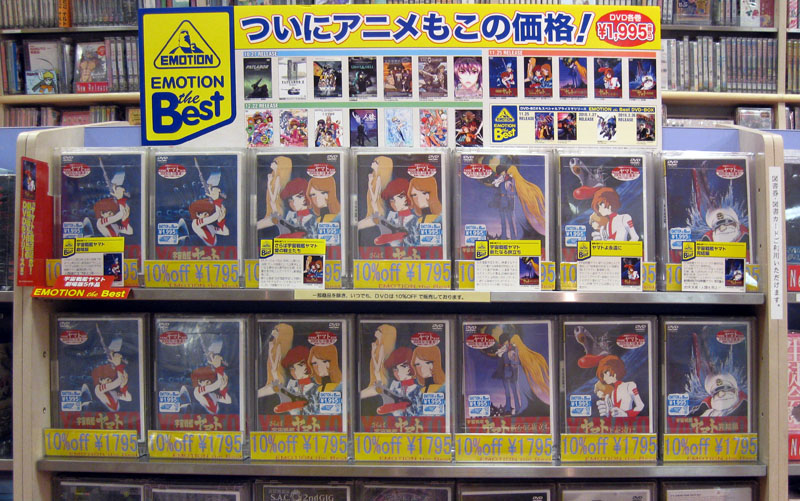 Emotion, the video arm of Bandai, reissued all five Yamato movies on DVD at a new lower price and with wide distribution to convenience stores and specialty shops all over Japan. 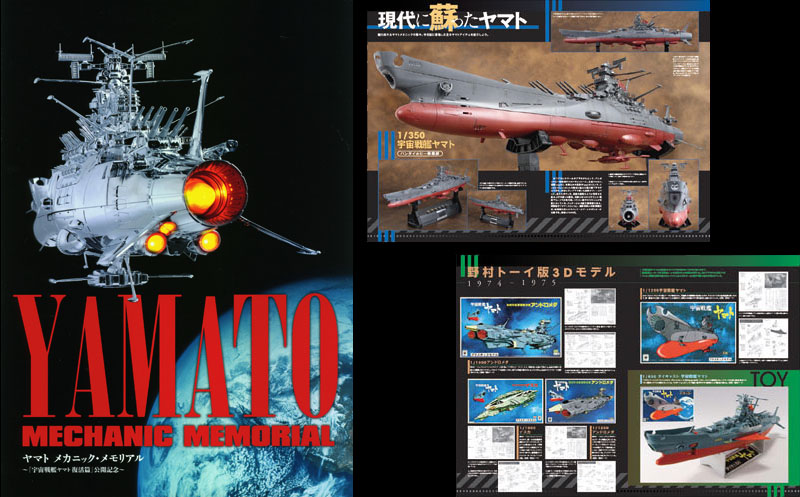 Yamato Mechanic Memorial was published on this date, a full color 52-page retrospective on Yamato toys and model kits dating all the way back to 1974. It was released in a limited edition of 13,000 copies by Toho as a tie-in to Yamato Resurrection and was sold in theatres and bookstores. It first became available at the November 28 preview screening for the film in Tokyo.

Three TV specials began airing on Japanese television this week and continued appearing throughout the month. They all took the opportunity to re-introduce the saga to new viewers prior to the premiere of Yamato Resurrection. The first special, titled Tracks of Yamato and Us, premiered on the Family Theatre network and kicked off a month of rebroadcasts for the entire Yamato saga. Marathon reruns of all three TV series and all five movies were shown multiple times. The second special, Space Battleship Yamato: All the Charm, premiered on TBS and migrated to other networks through December 24. The third special was titled The Age with Yamato and appeared exclusively on Japan’s History Channel.

Anime World Star, a specialty goods store in Japan, frequently makes original licensed products. In the past they’ve marketed Yamato pencil boards by Keisuke Masunaga, character designer of the Playstation games. On December 11 they added “Choco Pan” to the list; chocolate bread in a can. They have released other Yamato products in the past and continue to do so today. (In fact, another new AWS product is coming right up.)

“Leiji Future 2009” was held on this day, an annual one-day event that brings Leiji Matsumoto together with his fans to talk about his many projects. Read an eyewitness report here.

The Space Battleship Yamato 2010 Memorial Calendar was published on this day by Yamato Studio, making it the third Yamato calendar of the year (since two Resurrection calendars were already available by this time). For what it’s worth, this beat a record set in 1978 when two Farewell to Yamato calendars were published for 1979. That HAS to be a Trivial Pursuit answer somewhere in the world.

See the Memorial Calendar from cover to cover here.

Anime World Star released two sets of postcards (for a total of 8). Since then, they have also released the first new Yamato products of 2010, a set of 7 cleverly designed cel phone straps with charm mascots. See them on AWS’s Yamato product page here.

Other December products included another reissue of two classic Bandai kits with new box art: the 1/700 scale Yamato and Andromeda models from 1978. 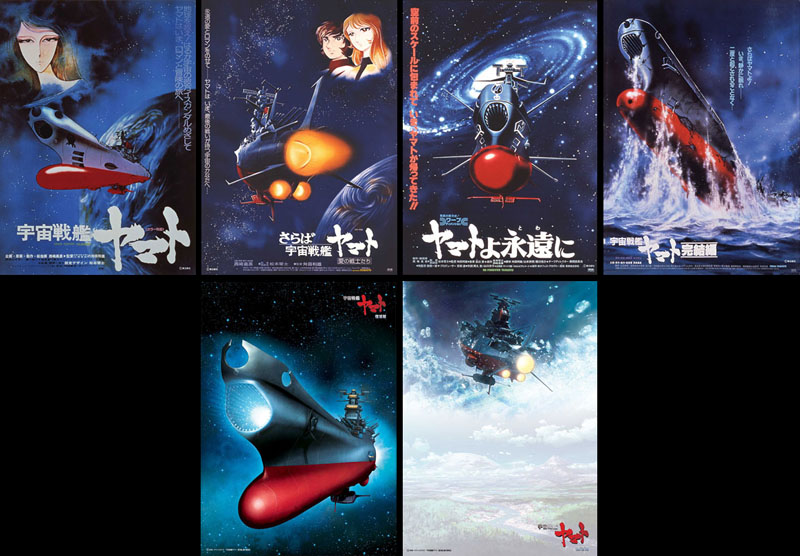 The Roman Temple company of Japan released a set of 6 “poster towels” late in December. This is a bit of a misnomer; they’re printed on a fabric that is much too thin to use as a towel, but they can definitely function as posters. Each measures about 18″ x 24.” The first four reproduce original movie posters, and the last two are from Yamato Resurrection.

In conclusion, this date gave us a redux of the most inexplicable products of the year, two key fob versions of the Kodai and Captain Okita Monchichis. It just goes to show you…uh…something or other.

Continue to our 2010 year-in-review