This collection follows the narrative order of the film, split between rearrangements of Hiroshi Miyagawa scores in the first half and new recordings of classical scores in the second half. It also includes shortened versions of the Yamato theme and the end title song Dedicate My Love. Newly-composed material by Kosuke Yamashita settles nicely into the overall style.

Track 14 is a welcome surprise, a nearly-forgotten piece written by Kentaro Haneda for the 1994 documentary The Quickening, which presented the initial development of the film. The first pressing of the disc came with a set of three CD-shaped postcards, shown below. 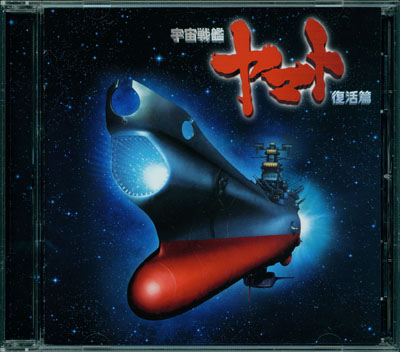 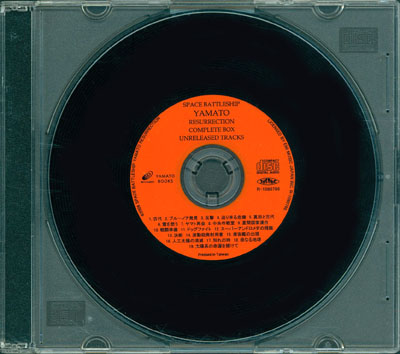 A second disc of “unreleased tracks” (shown at right) was included in the Yamato Resurrection “Complete Box” released in late 2010. It contains 19 tracks, again a mixture of anime BGM and classical music. Together, these two discs present the entire score of the film.

Many people fondly remember the great melodies of Yamato. This impressive music was created by composers Hiroshi Miyagawa and Kentaro Haneda, both of whom are now deceased, and it has been wonderfully revived a quarter century later. Additionally, this luxurious soundtrack is supported by the immortal light of some of the greatest classical music. The picture is completed by new material from Mr. Kosuke Yamashita, giving us a gorgeous soundtrack that is appropriate to the revival of Yamato.

It has been more than 25 years since the time of Final Yamato. The enthusiasm of Mr. Yoshinobu Nishizaki hasn’t changed since then, and his abiding passion continues to aim for the highest standards on this new voyage. It was pure bliss for me. I would appreciate it very much if you enjoy the music of Space Battleship Yamato, which is at once gentle, strong, and full of magnificent passion. 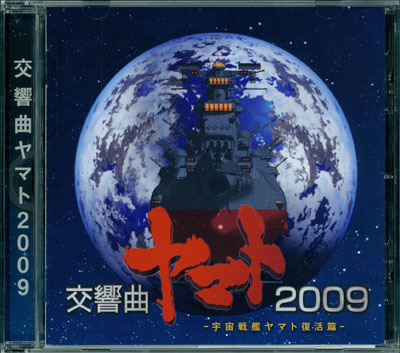 This is a faithful re-recording of the Grand Symphony Yamato, originally performed by the NHK Orchestra under Conductor Naoto Otomo in 1984. It was considered the crowning work of Yamato music, an elaborate medley of Miyagawa themes extensively rearranged by Kentaro Haneda into a fully-realized four-movement symphony. Owing to tempo changes, this recording is two minutes longer. A substantial portion of the fourth movement is heard in the climax of the film, which is centered around a powerful, full-throated version of the Yamato theme that (literally) shouts victory to the heavens. The first pressing of the disc came with a set of three CD-shaped postcards, shown below.

Read all about the original performance and Kentaro Haneda’s liner notes here. 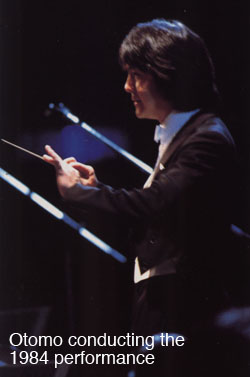 The life of the great and energetic musician Kentaro Haneda was far too short.

He was a pianist of rare genius whose gifts went beyond those of most composers. His charisma and sense of humor put him in great demand for appearances on TV and radio, and he was loved by many people. I could go on about how wonderful he was, but no amount of words could be enough. Fortunately, he left behind a lot of recordings.

However, of all his professional works and performances, none measures up to the standard of the Space Battleship Yamato Symphony.

He was merely in his early thirties when he wrote it over a quarter century ago, pouring into it all of his remarkable ability and enthusiasm. He deeply loved the diverse melodies by the beloved composer Hiroshi Miyagawa, with whom he worked closely. He made full use of their depth and breadth, combining them with his great knowledge of classical music and the stately dignity of a large symphony orchestra. He even included homages to Bruckner and Bernstein.

At the time, Haneda worried about meeting the challenge of composing this masterpiece. I understood well the suffering one must endure for such an achievement. I will never forget how moving that original stage performance was.

Now, with the premiere of Yamato Resurrection, you will hear the performance of Yukio Yokoyama on piano and Yasuko Otani on violin, along with the Japan Philharmonic Symphony Orchestra. Together they completed this new recording 25 years after the original live performance. The Yamato Symphony breaks the long silence and revives the magnificent spectacle.

The souls of two great musicians, Haneda and Miyagawa, will live on forever in this symphony. My wish is for it to be heard again and again, to continue bringing hope, courage, and dreams to many people.

The most significant change in the Director’s Cut was the music, and that alone was reason enough to add another jewel to the crown. This 2-disc set covers the entire film in narrative order with most of the re-engineered music in the second half. Only two of the classical tracks heard in the 2009 score are still present; all others have been re-arranged and newly recorded from original Miyagawa film and TV scores. Even if you haven’t seen the Director’s Cut, the album still serves as a fitting love letter to Yamato music. The end theme by The Alfee is still in the film, but an orchestral version subs for it on this release.

One disc just wasn’t enough to hold this much energy! All three CD singles contain two versions of the end title song, one with vocals and one without. Each also has its own bonus track. 40281 includes Space Battleship Yamato 2009 with Symphonic Orchestra, 40282 includes Space Battleship Yamato 2009 Rock Version, and 40283 includes Shining Run, a theme written for the 2009 Osaka International Female Marathon.

The fourth disc shown at the bottom of this page also contains the band’s rendition of the Yamato theme with symphonic orchestra and the standard version of the end song; it was released as part of a promotional package for the Resurrection Fever pachinko game in December 2011. (EMI Music Japan, PCDZ-2224)

The Alfee is a very high-profile rock group in Japan, a trio consisting of Masaru Sakurai (bass guitar/vocals), Kohnosuke Sakazaki (acoustic guitar/vocals/percussion) and Toshihiko Takamizawa (electric guitar/lead vocals). Like Yamato, they celebrated their 35th anniversary in 2009; they formed the same year series 1 made its TV debut. Since then they’ve contributed theme songs to anime productions many times, including Lensman (1984) and Galaxy Express Eternal Fantasy (1998).

If there is life in a planet…
Are you able to protect that life?
Born insignificantly, fated to vanish
The life of your beloved…can you protect it?

Before long, trees and flowers will bloom on our mother planet
A smile will be revived in every heart
Though our lives will disappear into silence
A bell of hope rings in the infinite future

Carry love in your heart to the end of the glittering galaxy
Let’s begin our journey and never give up our dream!
Let’s overcome our sorrow and never look back