I have to confess something at this point. My first screening of this movie wasn’t my best. I got no meaningful sleep the night before (jet lag and all) so when the story slowed down on Planet Amare, I drifted a bit. The result was that I didn’t catch all the details I described in part 3. My second screening two days later was much better, and during my third screening I took the notes that made this synopsis possible. My drowsiness was what lead me to the initial judgment that the movie was soft in the middle because it didn’t keep me 100% awake. On the other hand, I snapped to full attention for the finale. I can’t say why, but it suddenly felt more like a true Yamato story than it did before. It gave me an immediate jolt of energy and took me all the way home, which makes it my favorite part. 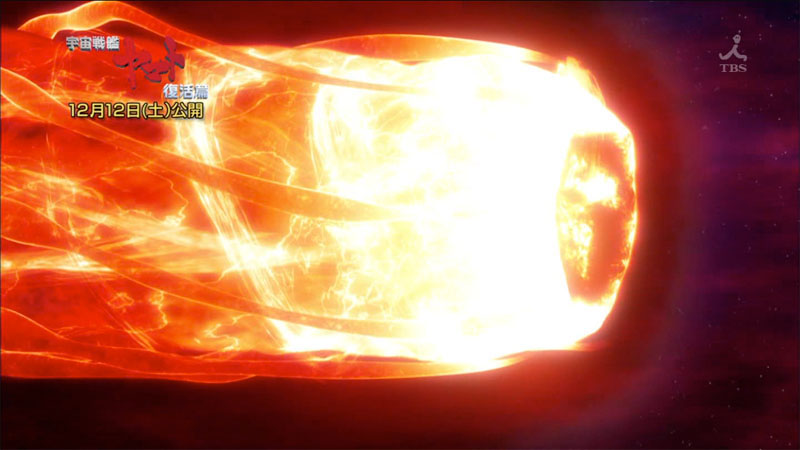 Yamato comes out of warp right alongside the Cascade Black Hole, which is at the outer edge of the solar system and plowing forward like a furious red freight train. Maho does a quick analysis. Its maw is twice the size of Jupiter. We’re gonna need a bigger boat.

Yamato warps to earth and the CBH blows past Pluto. 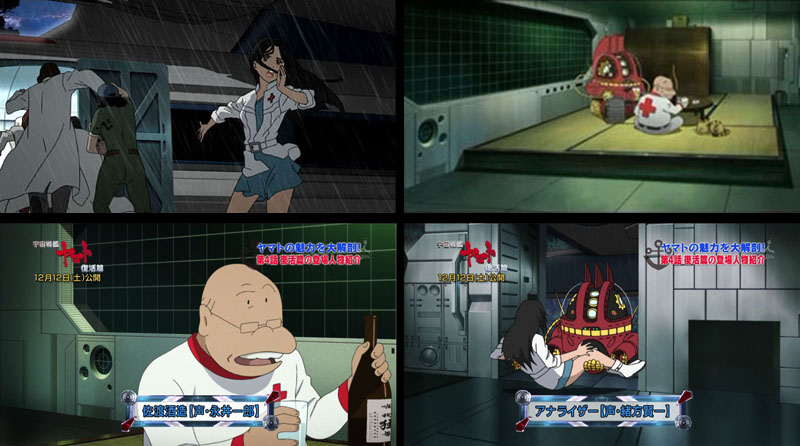 At Field Park Sado in Africa, a shuttle is prepping to launch as the rain comes down in sheets. Miyuki begs Sado and Analyzer to get on board, but they won’t budge. They belong to the Earth and they’ll stay to the bitter end or until the sake runs out, whichever comes last. Sado tells her one more time that she’s misjudged her father, and that she cannot stay or he will have no one left. Analyzer dumps her into the shuttle and slams the hatch.

The CBH pushes past Saturn, tearing at its rings.

Yamato descends to Earth and Kodai calls for everyone at EDF headquarters to get on board while they can.

In Africa, lightning strikes Miyuki’s shuttle and it goes down in flames.

Sanada and Jirou Shima are the last ones left at HQ. Sanada isn’t going. Jirou reports this in person to Kodai. He’s not surprised. Word comes in about the crashed shuttle from Sado Park, and Kobayashi jockeys with Kamijou to go and save the captain’s daughter. Kodai forbids them both from leaving, then flies the rescue mission himself. My heart skips a beat when he rolls out in a breathtaking new version of the Cosmo Zero. I’m getting goosebumps just typing these words. The Cosmo Pulsars are awesome, but this baby looks like it could leave them standing. 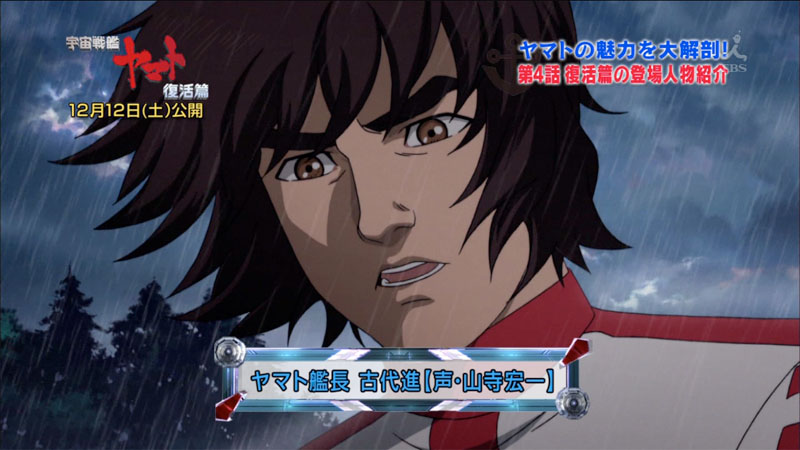 Kodai finds the crashed shuttle in short order and lands to rescue Miyuki. He presents her with her mother’s tattered hat. His mission is done, so now the two of them can search for Yuki together as father and daughter. Miyuki stares deep into her father’s determined eyes and at that moment she understands what Sado’s been trying to tell her all along.

Sanada stands in the pouring rain at Hero’s Hill, saluting the statue of Captain Okita. He turns to see Yamato climb up into the roiling clouds and smiles, possibly for the last time. Sado, Analyzer, and Mi-kun share his thoughts as they wait for the end. We pause for a lingering look at Earth and the beauty of its many creatures. The Infinity of Space theme reminds us what it’s all worth.

The remaining emigration ships get underway and the last citizens to leave shout, scream and cry their farewells. “Goodbye, Earth! We’ll never forget you!” (Side note: Yoshinobu Nishizaki said he participated in the voice recording for this, and by the end of it he was in tears. I can see why.)

Kodai thinks his own thoughts about the loss of the planet he fought so hard to save time and time again…and the Metsler demon reappears on Yamato‘s bridge. Miyuki listens with everyone else as he explains what this is all about. The dimension his people come from is in an advanced state of entropy. They now use powerful dimensional transfer devices to tear open rifts in space through which energy is pulled into their dimension. This is what is about to happen to Earth.

When I first saw the demon, it seemed a bit out of place in the Yamato universe, but then again it isn’t from the Yamato universe. And, as I reasoned later, a villain like this is really the only place to go after all those interstellar empires.

Metsler vanishes and Kodai figures it out: if the Cascade Black Hole actually is an artificial construct, it probably has a central power source. He orders all hands to their stations and tells Maho to locate the dimensional nexus of the CBH. The soundtrack shifts to a new mode; we hear part of Kentaro Haneda’s masterpiece, the 1984 Yamato Grand Symphony. It begins with the finale music from Farewell to Yamato. This means ENDGAME.

Maho locates the focal point deep inside the CBH and Kodai orders the ship to charge toward it. He then orders everyone to set up the Wave-Motion Gun to fire all six of its rounds in one titanic blast. When Sanada designed it, he allowed for this possibility but expected it never to be used. This could, in fact, destroy the entire ship. But the chance to save Earth is far more important than saving themselves. Agreement on this point is unanimous.

The massive, undulating walls of the CBH now surround them and lash out. The third bridge takes heavy damage. Its armor is torn away, exposing Maho and her crew. She shouts the countdown; they’re almost on target.

Kodai himself takes the WMG grip and squeezes the trigger. The mightiest WMG blast we’ve ever EVER seen explodes out. Yamato‘s entire front half buckles and ruptures.

The dimensional nexus is hit dead on! The CBH stops in its tracks and implodes! The danger is over. The Kentaro Haneda symphony reaches its crescendo with a full-throated blast of the Yamato theme. Handshakes all around. But then it quiets down…

We see Maho and her girls slumped over their consoles, exposed to hard vacuum. Over her still face we see Saturn, Jupiter, Mars, and finally Earth. Ready for its people to come home again.

As Yamato drifts toward Earth a song begins, Dedicate My Love by The Alfee. I dedicate my love to protect you. I swear my eternal love on 100 billion stars.

The first ending credit is a dedication to all the Yamato staff members who are no longer with us; Kei Tomiyama (the original Kodai), Composers Hiroshi Miyagawa and Kentaro Haneda, lyricist Yu Aku, and guitarist Yoshio Kimura.

Afterthoughts: even with extra armor plating, it seems the third bridge is still a death trap. It’s been sort of a running gag until now because we never saw the human cost of that thing getting blown up and knocked off in previous stories. The final scene of Maho is quite sobering.

This synopsis should make it obvious which of the two endings got the most fan votes at the preview screenings. The people I talked to said they thought it was the more natural choice. In the alternate ending (which reportedly will be on the DVD) the attempt to multiply the WMG energy simply didn’t work and Earth was eaten. I’m sure it was well-executed, but I wouldn’t put it past Nishizaki to use this as a way to get some publicity while fully intending to keep the “save Earth” ending.

About the characters: other than Miyuki, there isn’t a whole lot of growth. Nobody else undergoes any great paradigm shift, since they’re all too busy with the mission. Kodai, too. His feelings about Yuki get enough screen time, but for the most part all he can do is react to events and push past obstacles. To Nishizaki’s credit, he tipped this in his Animage interview, saying his intention was to simply establish the new crew so they can be further developed “next time.” I’d love to see a TV series spin off from this, but I have no idea if such a thing is possible. One thing’s for sure: I’ll be happy to see Part 2 in a Japanese theatre again.