The Galaxy’s Ordeal! The Year 2200 Advances!

The “Octopus Star Storm” is a group of eight stars that are still forming. The protostellar disks are in the process of accretion, and their extended atmospheres merge, creating dangerous currents between them. Throughout the area is a black cloud, limiting the Argo‘s visual and sensor range. It’s here that the Argo‘s been stopped for almost the last three weeks.

Production note: In the original 39-episode scenario for Space Battleship Yamato, the ship was to encounter a large zone of radioactive clouds in episode 12. The plan was to break through it in the slipstream of a comet. In the original concept for episode 14, the ship’s path was to be blocked by a supernova. Both of these ideas were combined into the Octopus Star Storm.

During this time they’ve apparently put up some kind of shielding around the main gun decks. They never mention exactly what it is. It disappears just as mysteriously later in the episode, and they never use it again.

Story note: The upper deck is covered with a transparent dome to protect it from the space storm. Regretfully, an explanation for this dome does not exist, but it could be made of transparent Tektite or an electromagnetic barrier. When I revived it in the Star Blazers Rebirth webcomic, I assumed it to be inflatable so it could actually be compressed and stored easier than something made from a hard substance.

Most of the crew are hanging around one of the observation decks, trying to keep themselves entertained. Wildstar and Venture are playing a board game (identified in Star Blazers as “Space Chess”, but is actually a game called “shogi”), which soon turns into an argument, which soon turns into a fight. I may be showing bias here, but Wildstar is clearly the better fighter (Venture has to resort to pulling hair!) but the fight is cut short when the pair are called to a meeting. The crowd is disappointed, with one anonymous crewman saying, “we need a little excitement around here.” Those exact words were said last episode when the crew were kept at bay from Dr. Sane’s initial examination of a prisoner. As thrilling as some of the adventures of the Star Force are, the downtime can be excruciatingly boring. 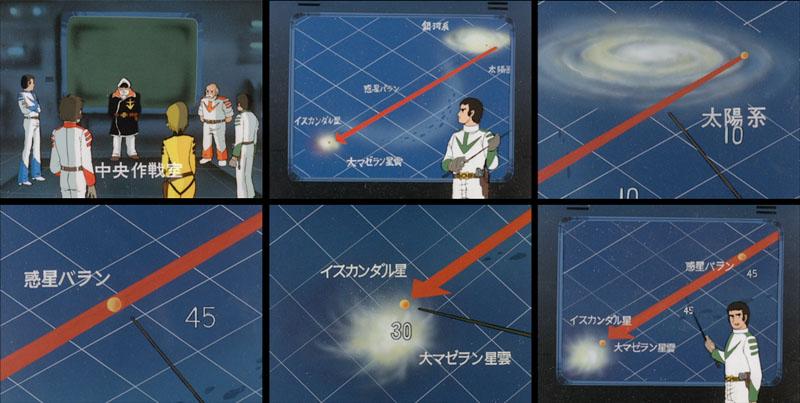 In Yamato, Shima (Venture) starts the meeting by reviewing the mission so far, detailing how long it was planned to get from one point to another, and the planet Balan is mentioned for the first time. The schedule set for their mission is very tight and they’re already 60 days behind. Star Blazers eliminated these introductory comments (which included plenty of Japanese-labeled mission maps) and instead opens the discussion with their current issue, the Octopus Star Storm.

Once the storm abates, the Argo should be able to proceed through a channel between the stars. It would take 40 days to go around, so Venture feels they’re better off waiting for now. Wildstar starts questioning these decisions, which assume the existence of a hypothetical channel. While Wildstar puts Venture on the defensive for most of the argument, Venture turns it around by asking Derek for some of his ideas. The look on his face tells us Wildstar doesn’t have any.

“More time passes,” says the narrator. Looking to find the channel, Derek decides to launch his fighter. Conroy is doing some maintenance and doesn’t notice Wildstar until he’s started up his Superstar/Cosmo Zero. He raises it to the catapult as Conroy quickly dons his space suit (the first we’ve seen in Black Tiger colors) and comes out on the deck behind him. Wildstar takes off, but the fighter gets pushed back by the fierce winds and is smashed to shreds. Wildstar is miraculously still in one piece.

Later, Captain Avatar orders both Wildstar and Conroy to scrub the hangar; Wildstar because he took off without orders, and Conroy because he didn’t prevent the launch as he was supposed to. Cleaning supplies in hand, the pair arrive in the hangar only to find it packed with people already cleaning it. Wildstar learns that everyone else is being punished for allowing he and Venture to fight. I guess that’ll teach ’em to be bored!

Nova asks permission from Captain Avatar to have a party. She feels it will relieve some of the stress the crew is experiencing. Avatar considers it for a second or two before rejecting the idea. Food supplies are dwindling. The fact that food is becoming scarce was mentioned last episode as well. Even taking delays into consideration, they are only 3 months into their year-long mission. Presumably, they would have been stocked up for at least a year’s journey. (Never having been beyond the solar system, they couldn’t rely on finding edible foodstuffs along the way.) It’s possible that much of their food was destroyed or spoiled when the Argo skimmed over the surface of Betelgeuse in Episode 12. Internal temperatures reached over 400 degrees celsius, which may have been a bit too much for the Argo‘s freezers to cope with.

Story note: as per the title of this episode, the year 2199 will soon give way to 2200. In Japan, it’s traditional to have a party around this time called a ‘Bonenkai,’ which literally translates to ‘forget the year.’ In other words, it’s a way of sending off the year that is about to end. In Space Battleship Yamato, this is most likely what Yuki had in mind.

Yamato time 23:15…most crew members are asleep. Engineer’s Assistant Travis Sparks goes down to the Engine Room to find Orion there, polishing the idle engines. Sparks (Japanese name: Yabu) is worried about their mission. It may be too late to save Earth, he thinks, so perhaps they should try to find another planet to settle on. He asks Orion to float this idea to the Captain, but Orion (if he even entertains the notion at all) doesn’t think Avatar will listen to him.

Sparks has appeared a few times before, and had a small speaking role in episode 10, but this is the first time he’s given a name. The idea that the Star Force might not succeed in their mission really takes root in his mind, leading up to his fateful decision in Episode 25.

Venture is also awake, staring out an observation deck. Nova joins him for a little talk. Despite his confidence during the meeting, he has his doubts about whether the channel exists. Nova asks him why they are staying here then, they could be halfway around the system by now. Realizing that his decision was already made weeks ago, he declares that the channel does exist. “Well, now we both can get some sleep,” Nova says as she walks off. As Venture watches her leave, I imagine he has a new level of appreciation for the way she helped him clear through all the clutter in his mind.

Derek is dreaming of burnt Earth and planet bombs. In a short sequence removed from Star Blazers, he sees his parents running in terror as a bomb falls on them. He cries out “MOTHER,” and wakes up. He’s so shaken by the nightmare it takes him a moment to realize there’s a red alert going on. He hastily puts on his shirt as he runs to the bridge.

Production note: look closely just before Wildstar exits his quarters and you’ll see another of those ultra-rare yellow-on-white crew uniforms on a guy running past. We’ve seen this color scheme now just enough times for it to gain legitimacy, but no official affiliation has been determined. There’s also a light-blue-on-white uniform in the scene, but that’s one of a kind.

The storm has finally abated. They can now see a Gamilon ship, which retreats into the star cluster. This indicates that there really is a channel. Avatar orders Wildstar to reconnoiter, which he is only too happy to do.

Production note: there are some new color-glitches on the Cosmo Zero as it flies this mission, including a completely unprecedented purple body panel in the launch scene. In all cases, these were simple mistakes that slipped through cracks in the schedule, but honestly…purple???

Wildstar soon finds the channel, but upon discovering he’s out of radio contact, he turns around to tell them the good news. Some of the command staff meet him in the landing bay. His excitement is dampened when Venture asks how long the channel is. Wildstar admits that he did not verify that it goes all the way through the cluster. Avatar orders the ship to take off, as they can’t wait for verification.

As the crew is scrambling with all due haste, Derek takes the time to call out Venture for a little “talk” on the gun deck. (Yes, they are literally outside the ship in this scene. Apparently, those unexplained clear shields make an airtight seal around the deck with both warmth and pressure.) Derek wants to settle things between them once and for all and throws the first punch. The fight is more visceral in Yamato, where we see several close-ups and flashes of blood as punches connect. Nova arrives (I suppose she had gone looking for the two men when they didn’t show up on the bridge) and delivers a thorough tongue-lashing. 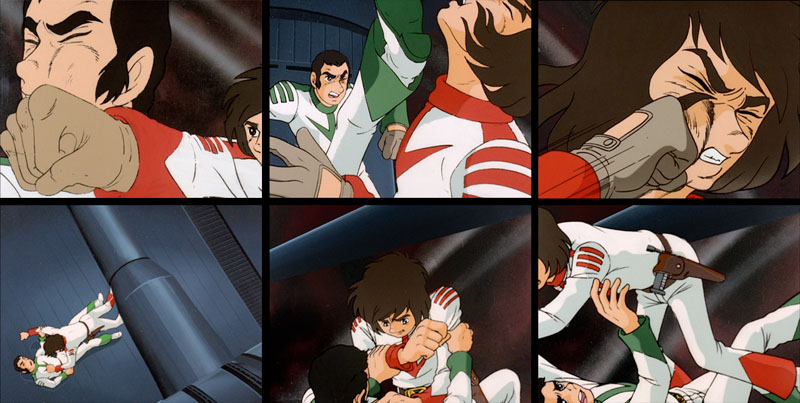 They all arrive at the bridge, and Venture goes to work saving the ship. The storm starts up and the Argo find itself getting pummeled by flotsam and jetsam. Unable to depend on the auto-pilot, Venture remains in control, straining on the yoke to avoid debris and fight the current. The wings are extended for better control in this environment.

Venture struggles with the helm. Wildstar adds his muscle to help regain control the ship. The far end of the channel finally appears, a window out into clear blue space. The ship coasts to freedom as Wildstar and Venture collapse in laughter. Nova arrives on the bridge with some treats to begin the party, which Avatar finally agreed to.

This episode features the peak of Wildstar and Venture’s rivalry, which has been building up steadily since episode 9. While they continue to have their disagreements, it never again reaches the intensity we see here.

One thought on “Episode 14 Commentary”