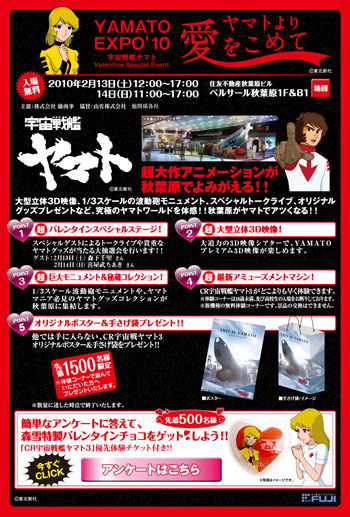 When the teaser commercial for the live-action Space Battleship Yamato movie aired in Japan on January 1, it ended with a pronouncement: 2010 is the Year of Yamato. And already, reality is living up to the hype. Yamato Resurrection played in Japanese movie theatres throughout the month of January and February, and a steady flow of merchandising built up nicely to a new public event that connected directly back to those of the production years.

Tokyo’s Akihabara district has become famous for a variety of reasons. A maze of radio and appliance stores earned it the nickname “Electric Town” in the post-war years, setting it up to capitalize on the personal computer boom of the 1990s and blossom into a world destination for anime fans at the turn of the century. It also earned some infamy in 2008 as the site of a one-man killing spree later dubbed the Akihabara Massacre.

That unfortunate incident took some of the shine off the place, but in February of 2010 Akihabara added another notch to its belt of positives when Space Battleship Yamato burst up from under the pavement to blast its mighty Wave-Motion Gun into the heavens.

Or at least, that’s how it looked on February 13 and 14 when a very special gathering took place called Yamato Expo ’10: From Yamato With Love.

The first news came from the official website for the event, which went on line February 4 with eye-catching images related to one of the two new Pachinko games for 2010. These games, in fact, were the major draw since the Fuji Company was the primary sponsor of the event. The Expo would serve as their public rollout and give other companies currently selling Yamato products the chance to display their stuff as well.

The website was taken down immediately after the Expo closed, but we’ve preserved screenshots of it which can be seen here.

Another novelty was a quick little web-game in which Yamato lines up a shot against Dessler’s battleship. Clicking on your mouse at the right time would let the shot connect, but the timing was a bit random, which made this harder than it sounds. See stills from the game here.

The five “attraction points” promoted on the website were stage events, a 3-D theatre, product displays, a chance to play the new games, and free giveaway items. The physical site for this Valentine-themed two-day event was an open-air plaza at Akihabara’s Belle Salle building, packed from end to end with all things Yamato. Friends of this website were there and took plenty of photos for those of us who weren’t.

Fans started lining up a couple hours in advance of the noon start time on February 13. The Belle Salle plaza was open to public view on two sides for maximum eye-catching. What could possibly be under that red shroud? 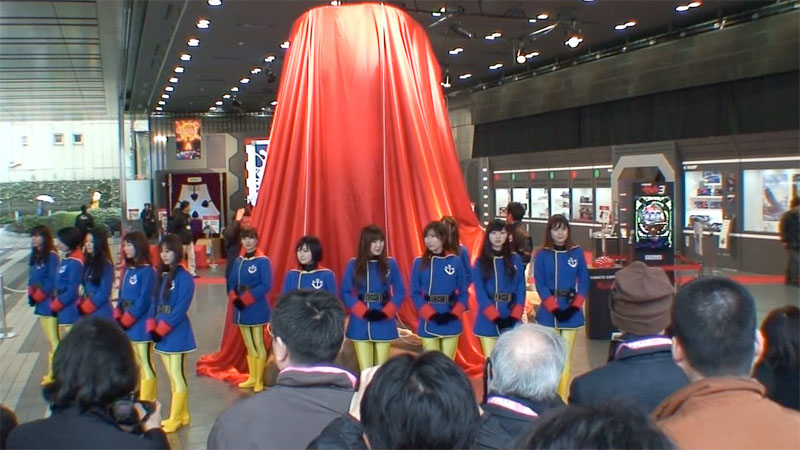 Familiar yellow uniforms appeared, this time coupled with blue overcoats to fend off the morning chill (it snowed in Tokyo that day, a rare occurrence). The “Yuki army” has been a fixture at all the previous Pachinko rollout events, and they were out in force again here. The ranks have changed over the years, but the army marches on.

As opening time approached, a large crowd packed the edge of the plaza and the Yuki army was joined by the day’s special guest, video idol Chisato Morishita. Her specific connection to Yamato is unclear, but she certainly brought in the spectators. The guest on day two was Kyan Chiaki, the voice actress for Maho Orihara in Yamato Resurrection.

The classic Yamato countdown began, and when the number hit zero Ms. Morishita pushed the giant red button to cue the removal of the giant red shroud. Yamato was revealed!

A dramatic reading ended with another countdown and the Yukis all donned their protective anti-flash goggles while the Wave-Motion Gun powered up…and fired! This was the first of many firings throughout the weekend. See a couple of shots go off on YouTube here. 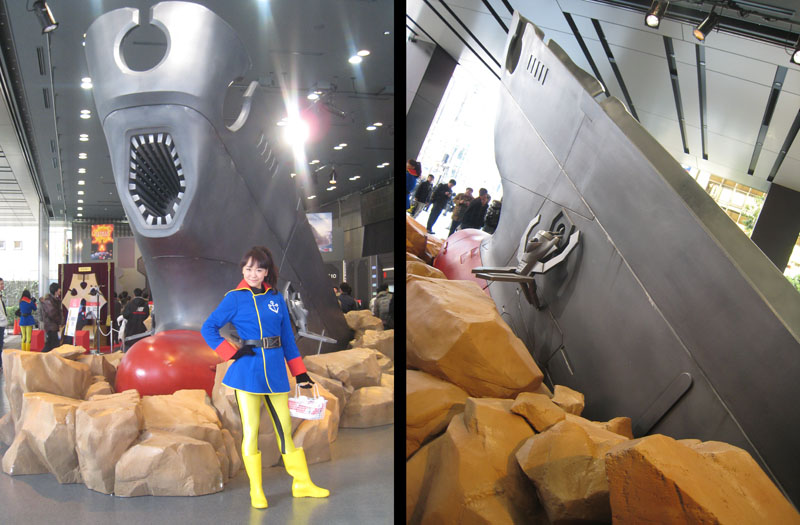 The scale of this model was given as 1/3, but at least one Japanese blogger opined that realistically it was more like 1/6. Though the overall proportions were not entirely anime-accurate, the modeling and attention to detail was praised by all, especially on the rocket anchor. 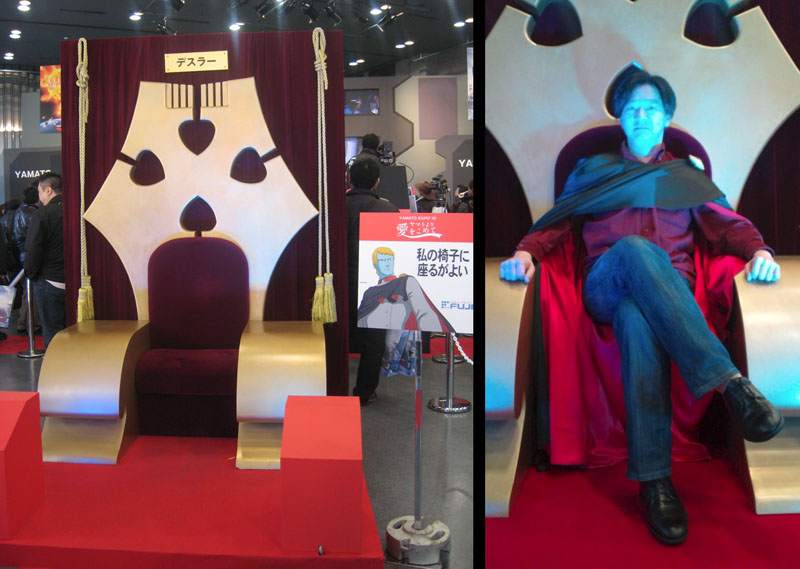 Moving along the outer edge of the plaza, the next attraction was this life-size Dessler throne with a Dessler sign reading, “sit in my chair.” Attendees were invited to don a black and red cape and take a seat. This put them in a carefully-positioned blue spotlight that temporarily turned them into Gamilons. Yamato Party alumnus Eisuke Ogura is seen at right, the ruler of all he surveys. 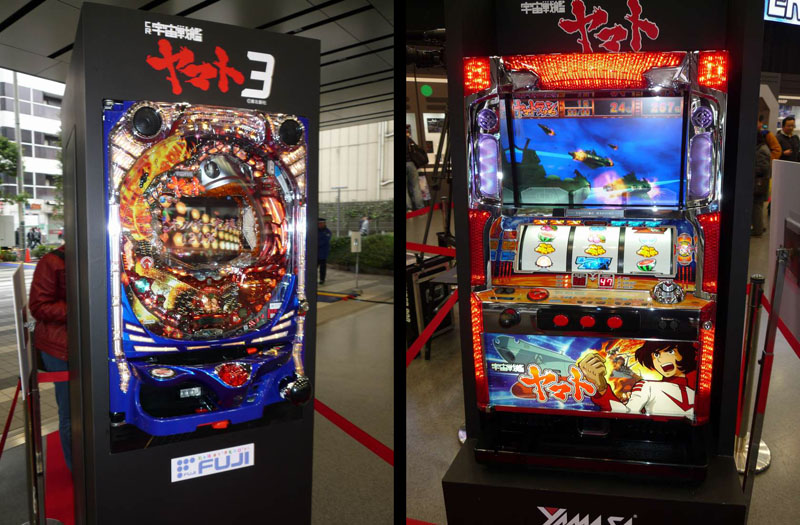 Next came display models of the two new Pachinko games, CR Yamato 3 (left) and Pachislo Yamato (right). These were the display models; many more were available to play-test in the basement level. You can find links to our reports on both games at the end of this page.

The back wall of the plaza was occupied by a video panel displaying anime footage and promotional clips for the Pachinko games. Beneath this was a temporary stage set up for prize giveaways and “afreco (dubbing) challenge” games in which contestants were invited up to test their mettle as voice actors. 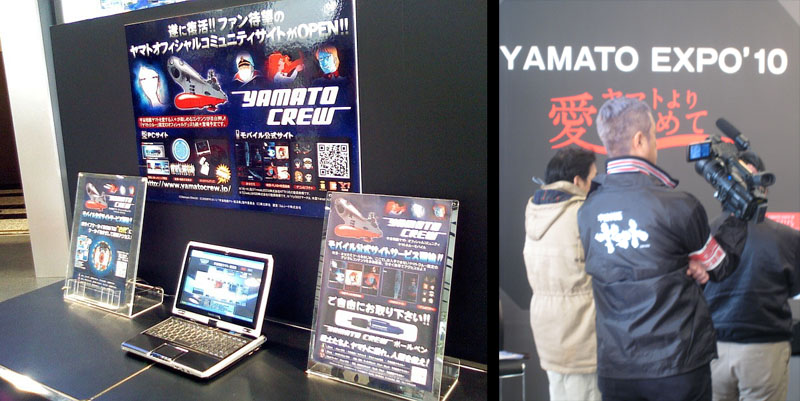 The Yamato Crew website was represented by a free-standing kiosk promoting the new Yamato Resurrection PC and mobile phone service.

The Yuki Army was well-outfitted, but so were members of the security team who wore a nicely understated Yamato jacket with a simple anchor emblem on the front and logo on the back. One would hope somebody decides to market this one day in the future. 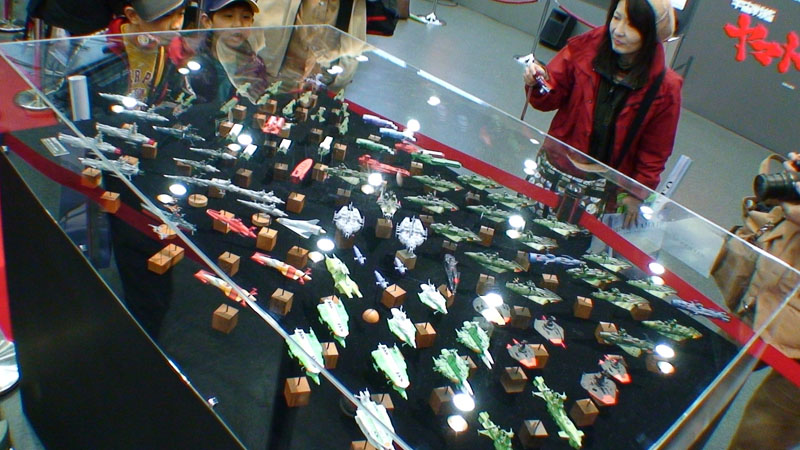 Also on hand was this showcase with its impressive array of miniature Yamato spaceships built by professional modeler (and Yamato Party alumnus) Nobuyuki Sakurai. He was one of two craftsmen who built the entire line of Bandai mecha scale model kits for a photo spread in the May 1999 issue of Dengeki Hobby Magazine (see the original photo here). Sakurai held onto and augmented the collection over the years to include similarly-scaled garage kits. This exhibit was a camera magnet for the entire weekend, and a big hit with the younger set.

The tantalizing backdrop for all of this was a wall of window displays running beneath a long video strip that was constantly alive with shifting graphics and character images. Let’s take a virtual walk from end to end and see what was shown.

At the front end was an entry table where the first 3,000 visitors received a small container of chocolates. Other free goodies awaited behind the doorway which lead to the basement level. There, everyone could try out one of the Pachinko games, then visit the 3-D theatre and watch three minutes of CG footage on a big screen. Upon exiting, they received a Pachinko poster and shopping bag.

See a brief clip of the basement level on YouTube here.

One highlight of earlier Pachinko games was a very slickly-produced press kit containing DVDs and large, full-color display books. The two new games have them as well, and they’re every bit as impressive as their predecessors. See them front to back at our game reports, linked at the end of this page.

Bandai products filled the next window. The upper shelves showed off the Space Panorama kits, sets of five miniature models with cardboard backdrops. This is especially noteworthy because the sets were initially released only once in 1979 and did not get reissued until 2009.

The lower shelf contained Bandai’s recently-reissued Soul of Popynica Yamato toy (with interior detail, lights, and sounds) next to the Yamato pedometer and some new t-shirts now available from the company’s online marketplace.

After a second set of doorways, fans could stare longingly at another Nobuyuki Sakurai masterpiece, the EDF destroyer Fuyuzuke from Final Yamato. Sakurai built this baby from scratch at 1/350 scale. It was last seen at the 2009 Yamato Party. 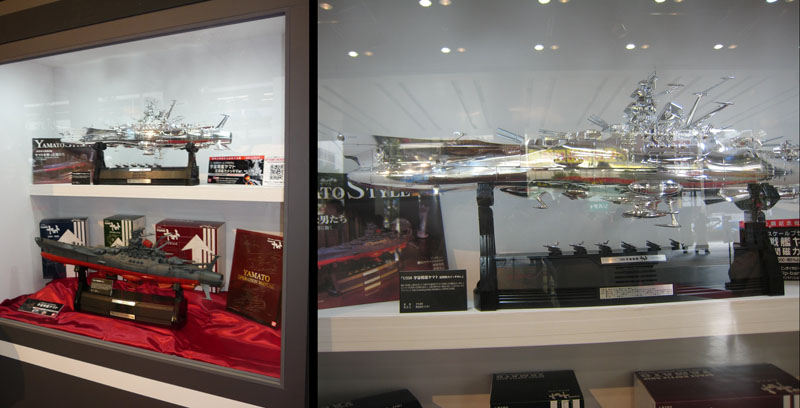 Right next door was the 1/350 Yamato model from Bandai, still the biggest ever made. The original 2007 version is on the lower shelf. The limited-edition 2009 reissue on the top shelf has a “reflective coating” to match the shield designed by Sandor in the last episode of Series 1. Read more about the model here. 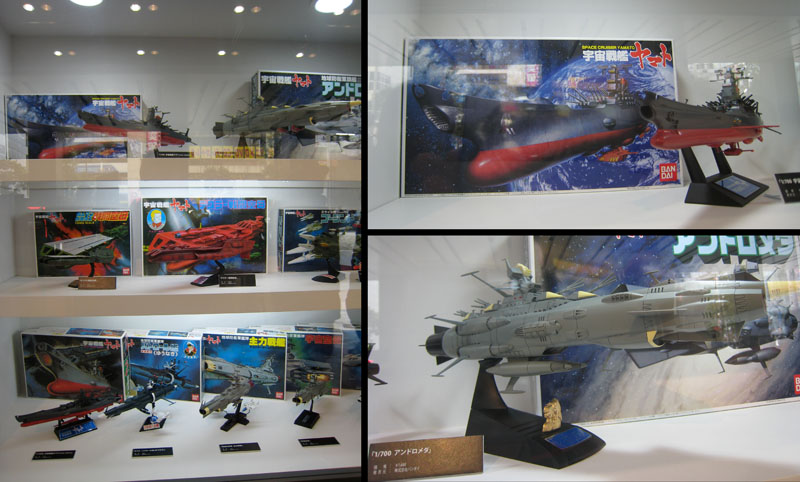 Bandai took advantage of the Yamato Resurrection campaign to reissue a lot of their Yamato models, which is only fitting since they were the kits that essentially kept the company solvent in the late 1970s and positioned them to become the global industry leader they are today. The two models on the top shelf (1/700 scale Yamato and Andromeda) were reissued in December ’09 with new box art.

Megahouse, one of the many Bandai subsidiaries, is a more recent Yamato merchandiser. Since 2006, they have released three “Cosmo Fleet Collections” (6 ships apiece) which were then repackaged in a pair of “Best Collections.” Their entire lineup was here on display, which included some duplicates. Six of these were just about to be re-issued in a “Cosmo Fleet Reproduction” set.

Right below that was the current editions of vintage Yamato manga by artist Akira Hio. They’ve recently come out from publisher Media Factory in two forms; the seven-volume 2005 editions (lower row) and the 2009/2010 editions (upper row). At the time of this Expo, the New Voyage manga had just been reissued. The Be Forever and Final Yamato volumes were still to come. All seven of the new editions are shown below.

Bandai subsidiaries owned the next window as well. Attached to the upper wall was the Spaceship Pins Collection from Plex and Yamato Toys, 43 different metal lapel pins released in a limited edition of 1,000 sets on January 15. Beneath that were two very unusual products from Bandai’s high-end Lalabit Market: the Dessler wine glass and the Kodai “Cosmo Zero” motorcycle helmet. Sandwiched between them was the Bandai/Emotion DVD lineup of the Yamato movies, newly reissued at lower prices.

Click here for a better look at the Pins Collection. 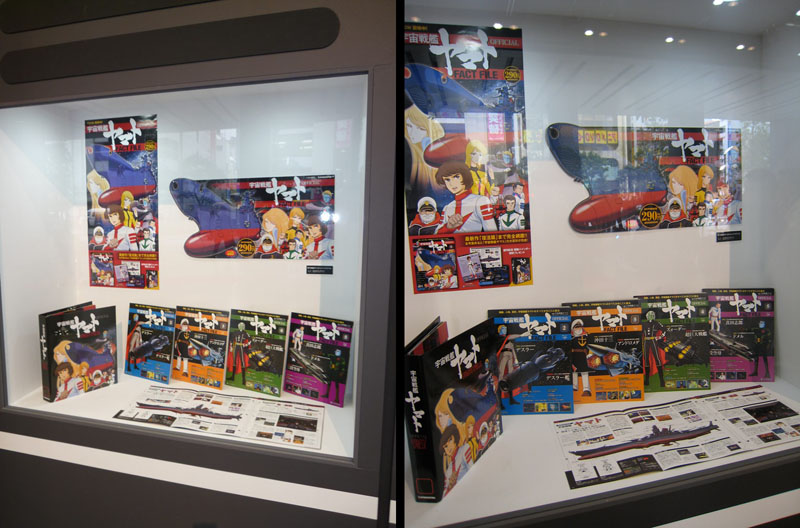 The last window was filled with one of the newest entries into the family, Weekly Space Battleship Yamato Fact File from the Japanese branch of international publisher deAgostini. This remarkable build-as-you-go encyclopedia first appeared October ’09 as a test-market magazine in Hiroshima, then was re-launched nationwide in early February. When all 80 issues are published, they will comprise the single largest Yamato resource ever created. 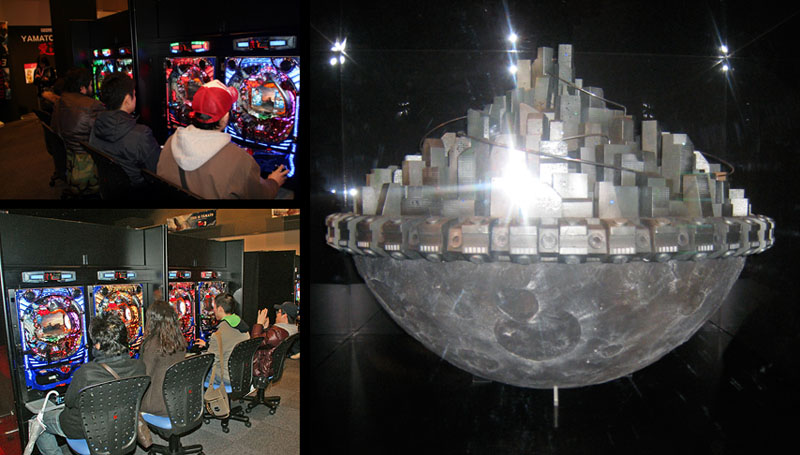 Plenty more was to be found one flight down, a basement floor that was split between playable Pachinko games and the aforementioned 3-D theatre. One more unexpected treat was this substantial model of the Comet Empire, about three feet in diameter, and never before (to our knowledge) displayed in public. This gives the world yet another exhibit waiting to one day be housed in an anime museum.

As promised, the first 3,000 visitors to the Expo walked away with free goodies. First was the glossy Valentine-themed invitation that qualified one to receive a gift bag.

The bag itself was one of the gifts, with the big splashy “CR Yamato 3″ Pachinko image covering both sides. The other items were a poster with the same image and another for the Yamato Pachislo game.

But wait, there’s more! A plastic container of valentine chocolates, 3-D glasses for the 3-D theatre, and a multi-color Yamato Crew ballpoint pen. 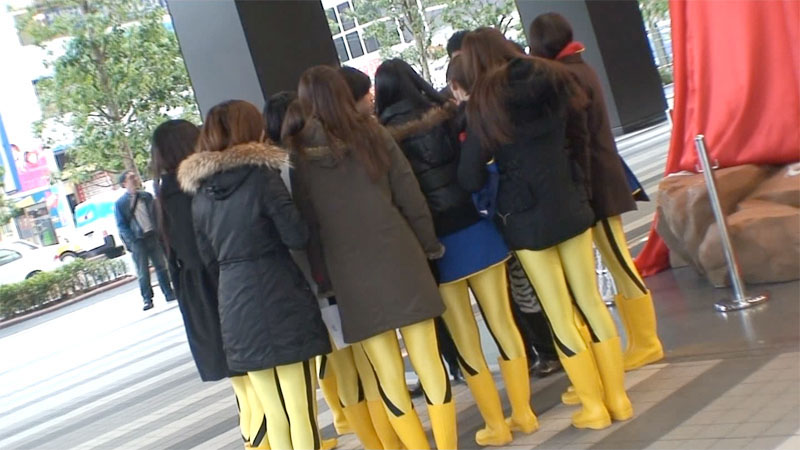 In the end, the highlight (at least for the male visitors) was the Yuki army, all of whom wore shining smiles and snappy salutes for the entire weekend. Click here for a gallery of Yukis whenever you need to brighten your day.

We’d like to thank our generous roving reporters for making this detailed report possible: Sonchori Ha, Eisuke Ogura, and Gwyn Campbell have earned the gratitude of all the fans who couldn’t be there to enjoy Yamato Expo ’10 in person. But many cameras were there, so plenty more snapshots can be found at the following links…

Setting up and Taking down…until another day? 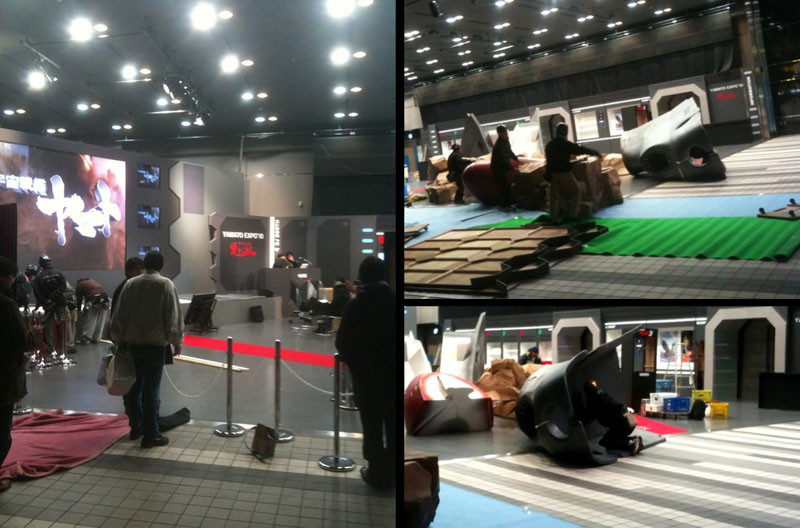