The last major coverage of Yamato 2 in the Fan Club Magazine came a year after it began, with issue 12 in October 1979. The occasion was inspired by the making of a TV special called the Yamato 2 Complete Edition, a 96-minute compilation of the series. Five members of the Academy Studio staff sat down to discuss it and revisit some of their production memories. Here is a full translation of that discussion. 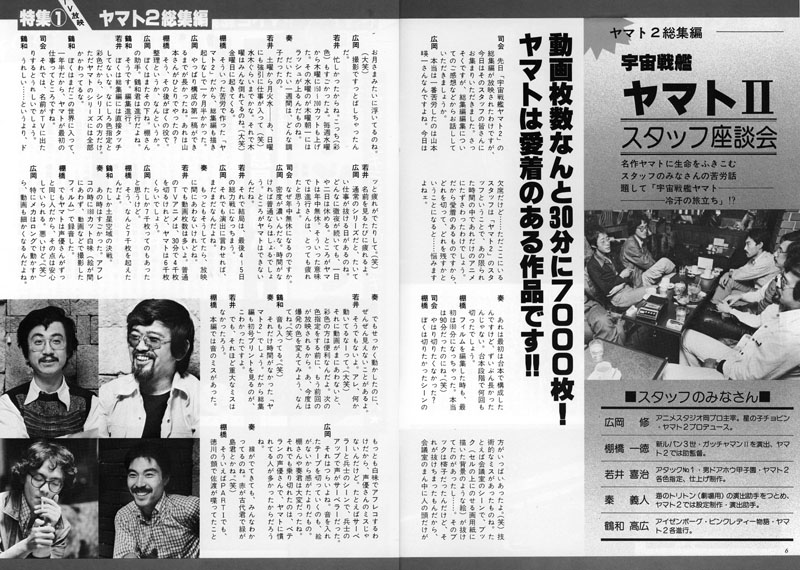 The Cold Sweat Voyage: The Hardships of the Staff Who Vitalize the Yamato Masterpiece

Assistant Director of Concept Design on Yamato 2, Production Assistant for Triton of the Sea [Compilation Movie]

Interviewer: Recently the Yamato 2 ‘Complete Edition’ compilation movie was broadcast. We asked the staff to gather and share their thoughts and impressions about editing this film. 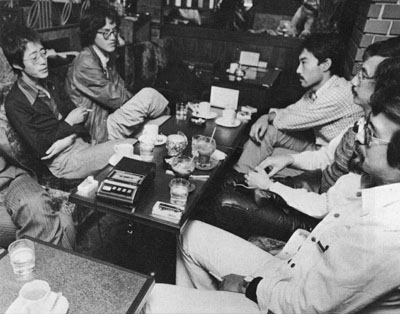 Hirouka: Actually, it was Mr. Eiichi Yamamoto who had the hardest time. He’s not here with us, but we here today were all staff members of Yamato 2 and were involved in it for a very limited time, so we all have fondness for it. Therefore, I had a hard time deciding what needed to be eliminated and what should be kept.

Hata: The film was first created by editing scripts of the entire series, but it was still very long. We cut the script down many times in the process of preparing it for the film.

Tanahashi: The first cut of the film was 180 minutes, but it was supposed to be 90.

Interviewer: And you didn’t want to cut any more?

Hirouka: Somebody missed it during the filming.

Wakai: It was very busy. The coloring was difficult, too. We had to finish 150-200 scenes every week from Wednesday to Thursday. And the scenes we finished on Wednesday were made into rush films in the early morning of Thursday.

Wakai: It was a really difficult situation. We started working on Saturday and kept working Monday, Tuesday, Wednesday–ah, of course, I was forced to work on Sunday, too. (Laughs)–until Wednesday or Thursday. Then everyone fell down [to sleep] on Thursday and we woke up on Friday.

Tanahashi: Because Yamato 2 came out of such hardship, it took a month and half to make the compilation movie even without new scenes.

Hirouka: It took a long time just to edit the first draft of the script. Did Mr. Yamamoto do that alone?

Tanahashi: Yes, then it was handed down to me, well, to organize. Or something like that.

Hirouka: I was working as Mr. Tanahashi’s assistant. Mr. Tsuruwa, you worked in the scheduling department. 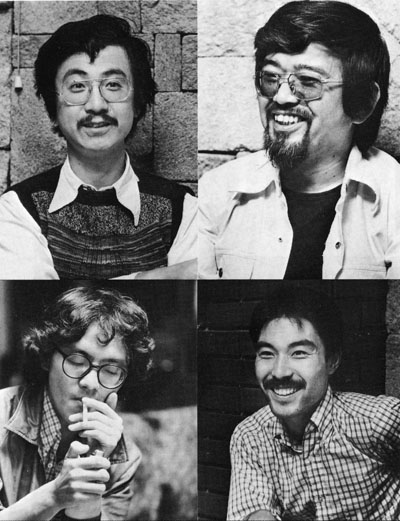 Wakai: I wasn’t directly involved [in the compilation movie] because I did color design and painting. I only worked on the the TV series. But I got involved with all Yamato series.

Tsuruwa: I’ve only been in this world for a year and half, so I can say Yamato was my first project.

Interviewer: So you’ll be happy when your name appears on TV.

Wakai: I get tired whenever I see my name.

Hirouka: On any other series, there would always be a day off. Even if I had several all-nighters, I could still get a day or two to rest. But there were no days off when working on Yamato. I think those who were in charge of scheduling were really exhausted.

Interviewer: Why was it that way?

Hirouka: The work was so dense. Usually things could be skipped under a tight schedule, but we couldn’t do that on Yamato.

Wakai: That’s why the last 4-5 were always like all-out war.

Hirouka: Even with such hard work, directors aren’t satisfied.

Hata: If we followed the director’s orders and did thorough work, we couldn’t finish an episode in time for broadcast.

Wakai: Yamato 2 used a lot of animation sheets [cels and backgrounds]. A normal episode of TV anime uses under 4,000 in a 30-minute show, but with Yamato it was around 6,000.

Tsuruwa: It was probably the Battle of Saturn episode.

Hata: That was a rough one. There were 180 scenes that were just shiromi, blank white film at the time of recording. (Translator’s note: this is the term given to temporary film that is prepared in lieu of animation when scenes are not ready in time for a voice recording. Instead of scenes, actors must time their line-readings to a colored line drawn on the film.)

Tanahashi: However, the actors were all the same from the first Yamato series, so we were relieved in that respect. That’s bad of me to say. (Laughter)

Hata: Sometimes you couldn’t even see it moving despite all the effort that went in.

Wakai: It wasn’t as bad as you say. I could see, like, oh, something is moving now? (Big laughter) And also, a delay in the animating department was beneficial for the color design department, because we could watch a previous episode on TV before we started working on the coloring of the next episode. That gave us time to think about changing the color of an explosion. (Laughter)

Tsuruwa: We could check sounds, too.

Hata: Yamato 2 was always running out of time. That’s why it was scary to watch the first print of the compilation movie.

Wakai: But there probably weren’t any major mistakes, were there?

Tanahashi: There was a mistake in the sound in the series. We couldn’t blame it on the voice actors, since they only had shiromi film to record to. For example, in a scene with Sabera [Invidia] and a soldier, when the soldier is on screen the voice was Sabera’s.

Hirouka: That’s too bad. It was also hard to edit the sounds after the recording was done, without seeing the pictures. We had to depend on intuition, since there was no picture. Mr. Tanahashi and Mr. Hata had a hard time. We could only overcome it because we had such great veteran voice actors who were used to recording for Yamato.

Hata: Even if they see colored lines on white film, everybody could recognize a red line as Kodai and a green line as Shima. (Laughter)

Tanahashi: That reminds me, in Series 1 there was a scene of Dr. Sado’s voice coming out of Tokugawa’s [Orion’s] mouth. 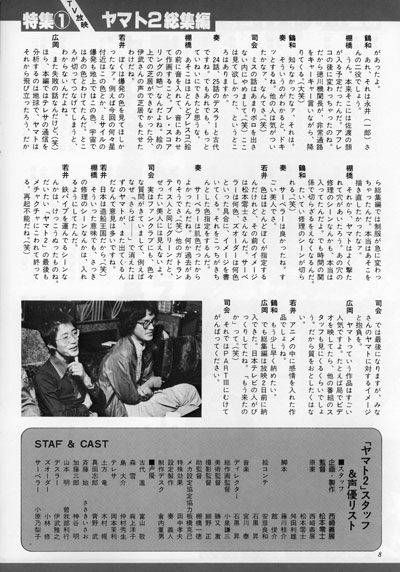 Tanahashi: Yes. It was originally supposed to be Dr. Sado’s face, but it was changed after the recording. So you hear Engineering Chief Tokugawa sliding down the emergency chute shouting in a high tone. (Big laughter)

Tsuruwa: I didn’t know that!

Hata: When this kind of mistake was found, I got nervous and wondered if other people would notice.

Interviewer: We should stop talking about mistakes before we reveal more. (Laughter) Is there something here you really want people to see [in the compilation movie]?

Hata: I would pick the Dessler & Kodai episodes, 24 and 25. But I think we could have made the scenes more carefully.

Tanahashi: That was done as “presco.” (Translator’s note: this is short for “pre scoring,” in which the voice is recorded before animation is drawn. This is the typical production method in America, but the reverse is customary Japan.) We didn’t have the opportunity to visualize the drama by pictures, but the voice of Masato Ibu [Dessler] made it dramatic.

Wakai: As for me, I wanted the viewers to look at the [different] colors of the explosions. For example, [an explosion] near Planet X in episode Y used this color, and a missile explosion in space used a different color from one on the ground. However, that wasn’t always understood after cutting and pacing [of the compilation movie].

Hirouka: This is about another mistake, again. (Laughter) In the series they were on the Earth when they analyzed the communication from Teresa, then Yamato launched from the Earth. They suddenly changed uniforms in the compilation movie because of the editing. I really wished to redo that part.

Tanahashi: Also, Yamato is often shot full of holes. Scenes of those holes being repaired were originally included [in the series], but I was forced to cut them because of time.

Hata: Sabera was good. She was remarkably beautiful.

Wakai: Although I determined the color [of the characters], her original design was by Leiji Matsumoto. He specified this color for Sabera and that color for Zordar. Based on that direction, I assigned the color. 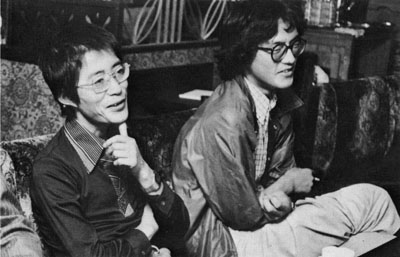 Hata: It was good that she had a regular flesh-tone. It made her look like she was a woman with a past. (Laughter) If she were green like the other people of Gatlantis, I couldn’t see her as beautiful.

Interviewer: A variety of questions come into the fan club office. For example, [we received] a lot of questions asking why Yamato, which disappeared at the end of Farewell, came back again.

Wakai: Because Japan is a shipbuilding nation. (Laughter)

[Translator’s note: Japanese people feel credibility is stretched when a damaged ship comes back to life without a repair scene.]

Tanahashi: That’s why I inserted a repair scene wherever possible.

Wakai: I remember painting many scenes of the crew carrying pipes. Speaking of the end of Yamato 2, the ship is totally destroyed and beyond repair.

Interviewer: In the end, what is everyone’s image and hope for Yamato?

Hirouka: Yamato is a work of great popularity. For example, when showing the video at the TV station’s office, the staff of other programs came to watch. Therefore, I don’t want to compromise the quality.

Wakai: It is a work that brings emotion to anime.

Tsuruwa: I wanted to finish it a little earlier

Interviewer: Then please do your best on part 3!

Special thanks to Tsueno Tateno and Michiko Ito for translation assistance.

Continue to Part 5: Noboru Ishiguro Looks Back from 1992