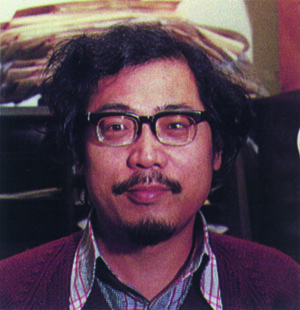 Born in Tokyo in 1938, Ishiguro graduated from Nihon University College of Art. During his college days, he started his animation career as a part-time inbetweener on Tetsujin 28 (known in America as Gigantor). After graduating, he found employment in Television Pictures Co., Ltd. and made his debut with Mysterious Thief Dr. Pride and Marine Boy. Since then, he has participated in many programs as a key animator and an episodic director. Currently, he is the Supervising Director of Art Land, Ltd. His many impressive credits include Yamato Series 1, Superdimensional Space Fortress Macross, Megazone 23, Legend of the Galactic Heroes, and many more.

In this interview, he shares his thoughts and memories about working on Space Battleship Yamato 2. It was published in the liner notes of Bandai’s Yamato 2 Laserdisc box set in 1992. The images on this page are from a Yamato 2 retrospective published in Roadshow Magazine (July 1979 issue).

What are your recollections of Yamato 2?

Mostly I remember all the tough things. Academy Studio was located in Nerima, and I believe it was a four-story building. When I was involved in the production, I could rarely go home. But there was no place to sleep in the studio, so I had no choice but to arrange chairs as a substitute bed, and this was quite unbearable. Since there was no other place to sleep, I snuck into Mr. Nishizaki’s office on the fourth floor and slept on his sofa. Usually the room was locked and I was not allowed to enter, but I was quite desperate!

I couldn’t do this often, though, so I decided to rent a room close to the studio. I searched a lot, but there was nothing between Nerima and my home in Ikebukuro. When I finally found one, I made it my private room as well as my office. This was the origin of Art Land, where I work now. Also, I once overheard a female fan who visited the studio say she was videotaping the program, and I remember I was very envious. I asked her to please bring it in next time! 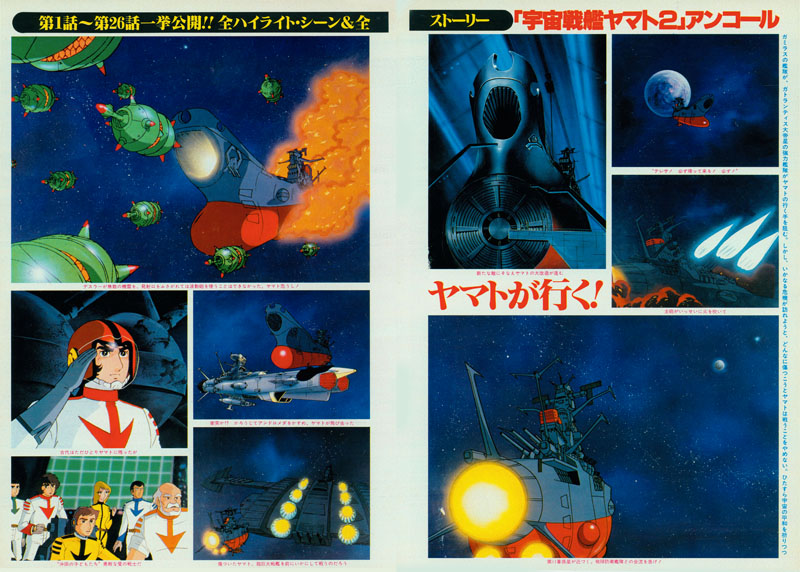 When did you get involved in Yamato 2?

Since I was on the staff of Farewell to Yamato as a technical director, my involvement in Yamato 2 was a natural result. As for Farewell, I remember that I worked on it right up to its theatrical release. The last portion I worked on was the final scene of the film, and I think we finished it a week before the release. Without any time off, I shifted over to the production of Yamato 2.

The director of character animation on Farewell was Tomonori Kogawa (later a character designer for such programs as Space Runaway Ideon and Aura Battler Dunbine). He was actually supposed to work on Yamato 2 as well, but he moved over to Galaxy Express 999, which started at the same time. I was also involved in Galaxy Express; I drew key animation for the opening title.

When working on Farewell, I stayed in the staff room of Toei Pictures, and had not gone out at all for three months, so I made many friends there and they asked me for help.

What was the nature of your job on Yamato 2?

Just like on the first series, I was a director of animation. Leiji Matsumoto was the supervising director. He was very interested in animation, and since Yamato was his first animation experience, he was very excited. But he didn’t know the actual production process, so I was his support. During Yamato 2, Mr. Matsumoto was too busy to come to the studio, so I became a sort of deputy supervisor in his place. But this prevented me from doing much of the hands-on work, and I lamented it.

When I was in the midst of a production, I could create and revise materials by myself, and I could feel that I was creating something. The work was more personal. But being a director, particularly in the case of a TV series, makes it impossible to oversee each weekly episode by myself. The role of a supervising director (which I do now) is to maintain the consistency of the entire series. So, I can’t give out detailed instructions like “this character would not have such an expression in this scene.” This sort of labor wears you out both physically and mentally. I tried it on series 1, and for the first time in my life, I had health problems. I should have left such details to the episodic directors. I carried all the burdens, including final presentation. It was worthwhile, but it would be impossible to do so now, even I was asked to. 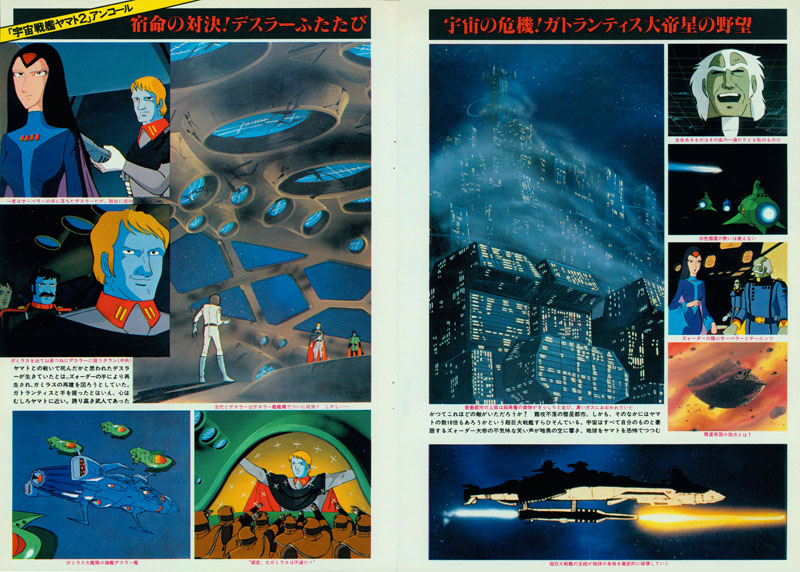 What was the biggest difference between series 1 and 2?

At that time of Yamato 2, due to the anime boom, the number of anime programs was increasing rapidly. Compared to the time of series 1, I think the number doubled. Because of this, our former staff members were scattered, working on other shows, and we had half the number of animators compared to series 1. This made it a tougher production. It was all we could do to complete an episode just before its broadcast. Because of this, I have regrets that I could not do things I wanted to do.

Yamato 2 was broadcast shortly after the release of Farewell to Yamato. When did the production start?

Very suddenly. At least, I hadn’t heard about creating a TV series during the making of the film. So the project started right after Farewell was released and found to be a big success. (Editor’s note: Ishiguro speaks here about the full animation production phase. Pre-production began much earlier.)

Production of the first episode must have been very difficult.

It was, indeed. The only relief was that we could reuse some of the artwork from the film. But it was really hard.

What do you remember when you look back at storyboards of the show?

They bring back a lot of memories. My handwriting was always messy in those days! A typical storyboard was 75 pages, 260 scenes. Small numbers by modern standards. The pace of animation is much faster now, over 300 scenes per show. However, in the case of Yamato, our policy was to keep the pacing slow and not to overuse dramatic upshots of a character. We discussed it with Mr. Nishizaki and usually stuck to head-and-shoulder shots. This saved the dramatic effect for when we really needed it. But this meant more drawings, so we got ourselves into trouble that way. Perhaps we used 5,000 cels per episode.

Mr. Nishizaki spent a lot of time on the script and he didn’t approve it until he was satisfied. This made the show better. Of course, scripting ate up a lot of time, and since our jobs could start only after the script was done, we had a hard time meeting the production schedule. 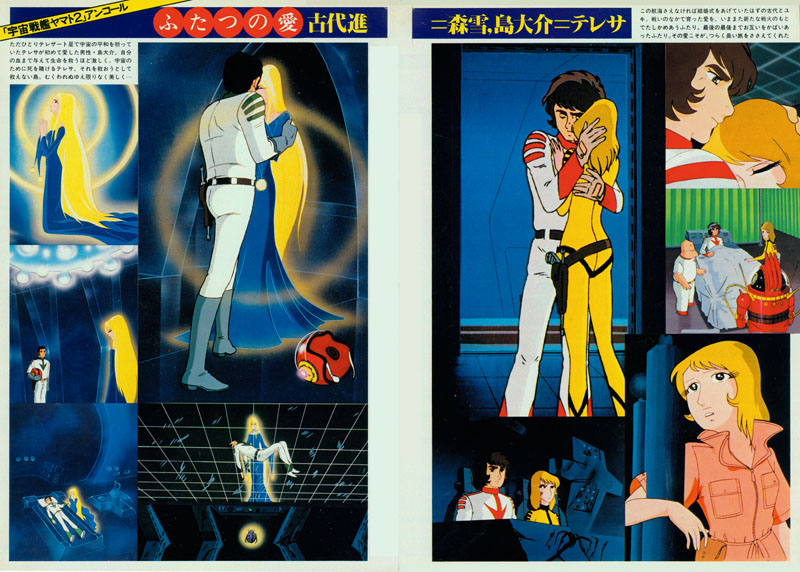 Evolving Farewell into Yamato 2 involved a lot of changes. What was this process like?

As in series 1, Eiichi Yamamoto participated as a story consultant, and I think many of the changes were his ideas. Also, we had many staff meetings, and Mr. Nishizaki chose the ideas he liked from those that were presented. He was Mr. meeting-man, and we sometimes went from 9 in the morning to 10 in the evening. Keisuke Fujikawa, one of the writers, came to the studio by car, and in those days, he could not park nearby, so he had to use a parking lot owned by a local hotel. As the meetings became longer, the parking fee went up. He often lamented “the money I make from my scripts is all going to the parking lot!” But by holding all these meetings, Mr. Nishizaki kept the staff unified, and he was good at it.

What was your personal goal in working on Yamato?

Since I was fond of Science Fiction, I did experiments that I always wanted to try. For example–this appeared a bit in the first episode of series 1–since I realized that explosions with a hand-drawn outline lacked dynamism, I experimented with a new style. I even tried painting with my own fingers as a final touch. I drew inbetweens for these scenes as well.

I also had a hard time designing the look of the space warp. The scene that explained it hadn’t been scripted yet. Mr. Matsumoto offered a written explanation, but what he wrote made me even more confused!

On the other hand, I put a lot of work into showing what life would really be like in a spaceship environment. Usually scenarios like this tend to be dry or cold. My attention to this carried over into Macross and Megazone 23. In Macross, day-to-day life was happening in a spaceship, and in Megazone 23, people completely forgot that they were living in a spaceship. I have been involved in several SF programs after Yamato, and in Macross, I was ready to create a science-fiction work with a clear vision. However, by this time I was a supervising director, and it was unfortunate that I couldn’t get involved in all the details.

In hindsight, when I look back at the SF works with which I have been involved, they almost all happen in spaceships. I wonder if I have a desire to go back to the womb?

If a new Yamato is created, will you participate?

No, I don’t think I’m up to it. Since it is my favorite program, I’d like to work on it again, and I know it would be interesting. But I will leave it to the young. 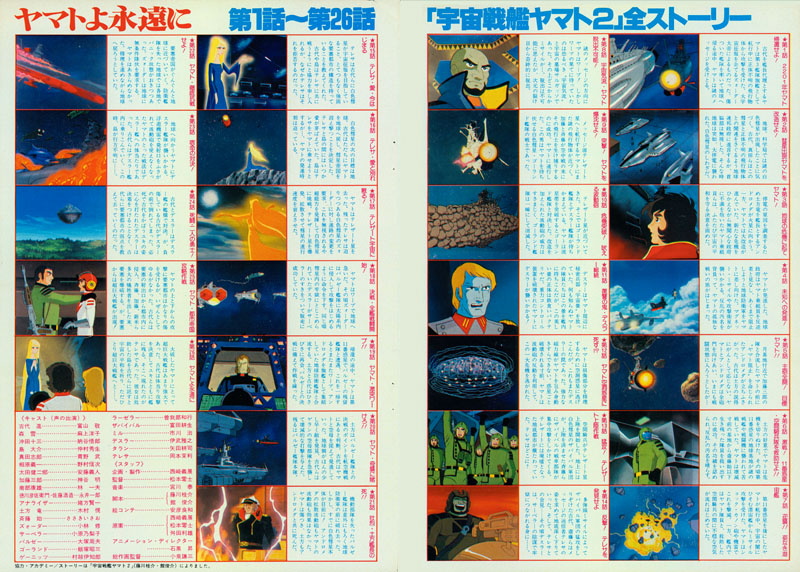 What kind of place does Yamato occupy in you?

It was a pivotal point in my career. Yamato drastically changed my thoughts on what could be done with animation. Before Yamato, it had been said that SF titles would not catch on, and I believed it. But Yamato overcame such thinking in a positive way and changed my mind. It made me confident, and for this reason, Yamato is a very memorable work. At the same time, I learned the severe side of making animation. But it will always be a good memory. If a new Yamato is created, I will enjoy watching it as a fan.

Read a 1975 interview with Ishiguro here

Read a 1977 interview with Ishiguro here