The Broad View of Civilizations

The history of the Earth is brief when compared to the ancient civilizations of the Planet Shalbart or Telezart, for example. The latter two had advanced, star-spanning technologies when the Terrans still lived in the Stone Age. The Dark Nebula Empire and the White Comet Empire also had comparatively older civilizations as well. Conversely, the Galman, Gamilas and Iscandarians are similar to the Terrans, but only slightly older. The original Denguil people, like the Telezart, had a long history. However, after the ancient Terrans conquered them (despite being rescued by the Denguil in the distant past) the original Denguil history came to a close. If we examine the Bolar’s history, there appears to be a scattering of various civilizations, but their cultures were largely homogenized into the Union. 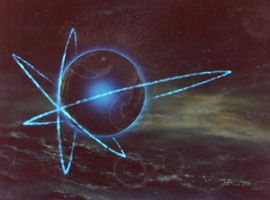 Planet Aquarius appears to have formed close to the beginning of the cosmos, before the other civilizations mentioned here. According to their fossilized remains, the Aquarians are believed to have brought forth life to the universe.

The Dark Nebula Vs. ?

The Dark Nebula Empire first appears in 2201 AD, in The New Voyage, and we learn that the Dark Nebula Empire is at war. We do not hear who they are at war with, but the other forces are said to be very powerful (the Bolar Union would be a likely candidate). In order to obtain the high energy of Gamilasium and Iscandarium for their war, the Dark Nebulans undoubtedly destroyed more than a few star systems in the process.

Terrans began venturing into space by the end of the 20th Century, and they continued on with this venture into the 21st Century. By that time, however, Interstellar travel was already taken for granted by the other civilizations, whereas the Terrans were still bound by their own solar system. After learning of Wave Engine Technology from Iscandar, the spaceships of Earth were able to advance forward very rapidly. 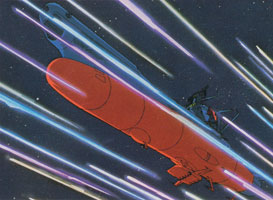 Unlike conventional chemical rockets, a Wave Engine has an apparently limitless virtual universe of energy compressed within it. This energy allows a ship to quickly leap from one distant coordinate to another through a warp in the space/time curve. This is why Yamato is able to travel 148,000 Light Years to Iscandar and back again within a year’s time. (Later, the Andromeda and other newer ships improved upon this technology, but because everything was set to automatic, manual override was not implemented on them.

After the demise of the White Comet, Earth knew peace for a time. However, just because the Empire’s base was destroyed, it doesn’t mean all of the Gatlanteans died with it. Some remnants of the main fleet could have survived and made their way to another star system. Or they could have continued to conquer the worlds they visited. Either way, it is highly unlikely that their limited numbers could revive the White Comet Empire ever again. Around this time, near the Galactic Core, the Bolar Union began searching for the legendary forces of Planet Shalbart. Dessler also investigated Shalbart roughly a year later. While this was going on, the Dark Nebula Empire began creating their plans against the people of Earth. 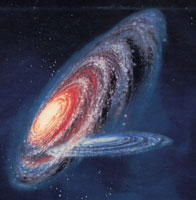 The Most Catastrophic Event in the Milky Way

In the latter half of 2203 AD, there suddenly occurred a severe disruption in space; a rift in the space-time continuum that intersected the core of another galaxy. This new galaxy entered our space-time from a parallel dimension, and for the span of a few hours, its mass tried to occupy the same space as the Milky Way, which caused unprecedented destruction. Stars collided, magnetic storms flared up, and many worlds were shattered. The dense clusters of the Bolar Union worlds were nearly all destroyed. Many of the Galman-Gamilas worlds also suffered heavy casualties, but those that were on their territorial borders were largely unaffected. We know that Dessler was patrolling the border, so he managed to survive.

This event also had an effect on the path of Planet Aquarius. The Denguil could not protect themselves against the sudden appearance of Aquarius, which flooded their world in an apocalyptic deluge. It goes without saying that the aftereffects of this catastrophie will take many centuries to stabilize.

Though no charge of racism has ever been brought against the Yamato convention of giving different skintones to alien races, it’s worth pointing out that the practice was established in order to give viewers a very quick way of identifying character alliegances as the story grew in complexity. Within this convention, it’s interesting to compare and contrast what is implied by the different choices.

Humans are generally depicted in light fleshtones (though if the series were made today, this would certainly be broadened), and of the various alien races, it is interesting to note that only the entirely sympathetic ones also carry the same color. To wit, the people of Iscandar, Telezart, and Shalbart also share the human skintone. The people of Gamilas are presented this way until episode 11 of the first TV series, when it was decided to turn them blue and thus establish the anti-Earth color variant. This tone, of course, is extended to include the Galmans of the third TV series, since they are the ancestral race of the Gamilas.

The “Bee People” of Beemera (also in the first TV series) are a dark green with the sole exception of their pink-skinned queen, who was probably intended to be more identifiable as an individual.

The Gatlanteans of the Comet Empire continue the theme with their olive green skin, with the interesting exception of Sabera, the consort of Emperor Zordar (as opposed to being his “daughter,” as indicated in Star Blazers). She probably came from one of the many conquered worlds with pink-skinned inhabitants. Oddly, the Gatlantean skintone is given to Captain Ram and the crew of the Legendra in TV series 3, who are allied with the Bolar Union and hail from the Planet Berth. From this we could speculate that they were former Gatlanteans who changed their alliegance, but the question never arises in the program.

The Dark Nebulans are a pale blue, in keeping with their machine origins. For a time, Emperor Skaldart and his companion Sada wear fleshtone disguises to lure Yamato‘s crew into a confidence trick. The Bolar Union has a similar, but paler blue skintone, implying that some racial connection may exist with the Dark Nebulans. Some of the Bolar have nearly-white skin, which is consistent with the concept that many planets form the basis of their union.

Lastly, the people of Denguil have a dark blue skintone, but any relationship to the other “blue” races is entirely speculative and unexplored in the series.