Production note: this episode was condensed from the original episodes 34 and 35. Captain Okita was to be placed in a hibernation tube to stave off his impending death, and a powered-up Wave-Motion Gun was perfected just before the final battle.

Picking up where we left off…the Argo is flying over Gamilon’s sulfuric acid sea while avoiding “missiles” (they call them missiles, but they look more like depth charges dropping from the sky). The Argo has already lost its third bridge to the acid (although the paint on the lower hull seems to be holding up OK) but the bombs are trying to force it back into the water. Heavy rain is starting to corrode it as well. The Space Battleship Yamato Playstation games added a detail I wish had been present in the anime: they show a laser grid blocking the openings on the cavern roof to explain why the Star Force doesn’t simply try to escape the planet.

Space Battleship Yamato follows this opening action with a recap rather than starting the episode with it.

Leader Desslok isn’t pleased that his “bumbling idiots” can’t seem to shoot down the ship (perhaps this is actually a testament to Venture’s piloting skills), and orders the storm machines to further agitate the atmosphere and melt the Argo out of the sky. General Krypt, displaying his knack for saying the wrong thing at the wrong time, brings over a drink to celebrate their impending victory. He’s promptly yelled at by Desslok.

Story note: Desslok has now transferred his command from the presidential office on the surface (in a city named Valeras) to his personal battleship which is concealed among other hanging structures.

It’s been noted before that the original Yamato names for the Gamilas [Gamilons] were inspired by Germanic names, specifically Nazi high command. This extends to the great Leader himself, Desslok. His Japanese name, Dessler, bears some resemblance to the name Hitler. Matsumoto claims this is just a coincidence, that his name is actually a take on “Death-ra.” However, that doesn’t explain his title, Soto. Soto is the Japanese translation of Fuhrer, and it has a similar connotation, invoking Hitler by reference. Star Blazers avoided the political implications and gave him the title “Leader,” which is actually an accurate English translation of the German word Fuhrer. His right hand man, Hisu [Krypt], is named for Deputy Fuhrer Rudolf Hess.

The bombing continues. The Argo manages to stay out of the sea, but just barely. Derek admits he doesn’t know what to do, and goes to Captain Avatar for advice. Avatar suggests submerging the ship, then scanning for the nearest and biggest volcano. Firing the Wave-Motion Gun at the base of a large volcano should trigger multiple eruptions on the surface. The plan of action decided, all water-proof hatches are sealed (particularly around the third bridge, erroneously referred to as the “third gun deck” several times in this episode) and the armored covers are pulled over the windowed sections of the ship. The Argo submerges into the acid sea. Desslok figures they committed suicide.

Production note: in the recording script, Analyzer’s description of the acidic Gamilas ocean was subtly revised. In the previous draft, it was explained that the ocean was a combination of organic compounds and aqua regia [Royal Water], which is capable of dissolving gold. It was thought that young viewers wouldn’t understand this, so it was changed to sulfuric acid.

IQ-9 analyzes the topography of the sea floor and feeds instructions to Venture. Several tense minutes later, with the ship dissolving around them, IQ announces he’s found a huge volcano with connections to several others. The ship is brought to a full stop and the Wave-Motion Gun is fired!

The result is catastrophic for Gamilon. Eruptions break through the surface. Landslides and lava flows start taking a toll on the “mushroom cities” that dot the inner crust. In his palace, suspended from the roof of the giant cavern, Desslok watches the devastation. First a slight smile comes to his face, then he bursts out laughing. Krypt is horrified, both by Desslok’s fit of insanity and by what’s happening to the planet. “What is to be done?!” he demands to know. Desslok continues laughing.

The Argo emerges from the sea. Desslok can’t believe it. He declares it a ghost ship, and breathlessly orders an all-out attack to “kill the ghost.” Missiles mounted on the roof of the cavern are prepared for launch. Krypt has had enough, and demands an immediate end to the fighting. This is a bit similar to Krypt’s real-life inspiration, Rudolf Hess, who broke ranks with Hitler and attempted to broker peace with the United Kingdom.

Desslok’s response in Star Blazers is, “I don’t want to hear such defeatist talk. It’s people like you who have kept us from winning.” In Yamato, Dessler’s response is much shorter–he executes Krypt. 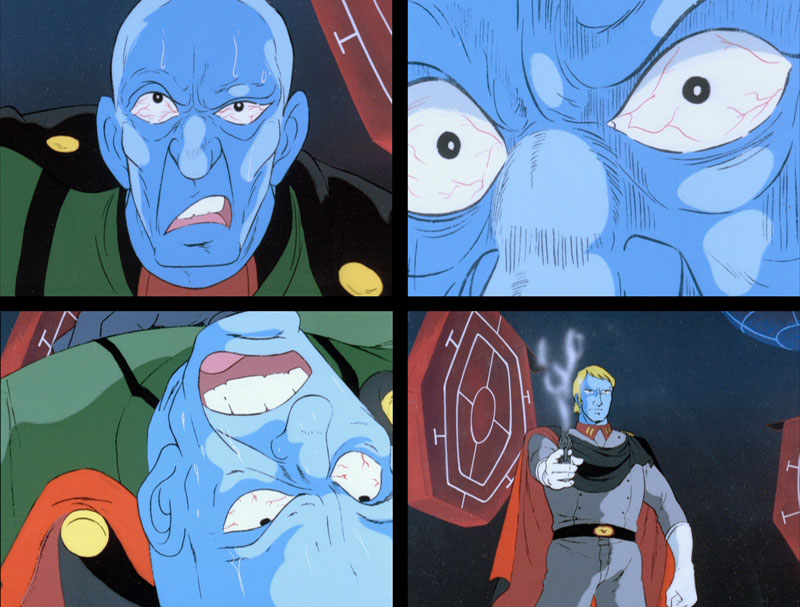 The presence of missiles on the roof of Gamilon–right above the cities–raises some disturbing questions. Were the missiles meant to keep the civilian population in line? Was this method used to trap other enemy ships before?

Sandor reports the damages the acid has done to the ship. Wildstar waves him off, telling him to make whatever temporary repairs are needed. Eager indicates multiple waves of missiles are approaching. The first group strikes without a response from the Argo. The ship gets hit in the aft section, causing part of the hangar to collapse.

As the next wave approaches, the Argo‘s guns fire. Several missiles are destroyed, but others get through. Crewmembers are blasted through corridors as explosions rip through inner compartments. The third gun cannon is hit, and using footage recycled from two episodes ago, we see the gunners scrambling to safety as the gunhouse explodes. As is often the case, Star Blazers sticks to external shots of the Argo‘s destruction, editing out any scene where the crew appears to be in danger.

Wildstar orders Venture to head right for the Gamilon command center so it will be damaged by the missiles that miss the ship. The battle sequence is extended in Yamato. Some of the scenes repeat themselves (we see some of the same roof missiles getting destroyed, for example) but others are new. In Yamato, we see Kodai [Wildstar] with his helmet on, sitting at a shock cannon. This suggests that the remote firing control on the bridge wasn’t responding and some of the gun’s crew were injured or dead, so he came down to help fire the cannons himself. 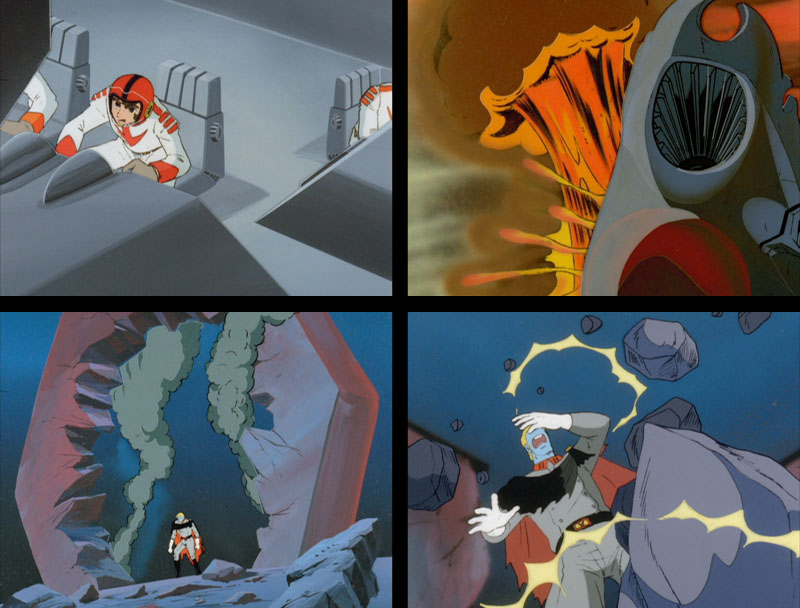 A shock cannon targets Desslok’s palace and fires. Desslok seems to be the only one in his command room that survives the initial assault, only for the roof to collapse on him. In Star Blazers, we have no fear for his safety because we’re shown his narrow escape. In Yamato, this is not revealed until episode 26.

We fade in on the aftermath, with Wildstar slowly coming to. He’s surrounded by debris and bodies. He turns a body over, only to shrink away, disturbed by what he sees. This brief scene was removed from Star Blazers. Star Blazers also tries to mitigate the seriousness of the situation with a short, frivolous exchange between Sandor and Eager, speaking from off-screen.

Wildstar steps out onto the deck and stares at all the destruction, of both Gamilon and the ship, in silence. From the Yamato narrator’s description, it sounds like the whole planet died in this battle. Given how unstable it seemed, it’s a real possibility that most if not all of Gamilon was rendered inhabitable.

Derek hears Nova sobbing. When he asks if she’s alright, she responds “I guess so…here we are so close to Iscandar and still fighting!”

“I think this was our last battle Nova. The Gamilons have finally stopped fighting.”

Yuki’s dialogue was quite different; she despaired that she could no longer face God after all the death they have dealt out.

Kodai delivered a speech at this point in Yamato. Usually very willing to fight, he is shocked at cost of the violence on both sides. He realizes that the Gamilas were attacking Earth in their own struggle to survive. He regrets that they didn’t help one another instead of fighting. Frustrated, he shouts, “Victory tastes like ashes!” and smashes his rifle on the deck. He’s come a long way from the brash young hothead from the beginning of the series.

This scene perhaps reflects the attitudes of post-war Japan. In episode 2, when Okita recruits Kodai and Shima, he describes the sinking of the Imperial Japanese Navy ship Yamato in 1945 as a fitting end for a ship designed for war, effectively drawing a line under its history. Although the great warship has been resurrected, it has been repurposed for a nobler cause: life. Kodai’s speech is an outgrowth of this new philosophy. War may be a necessity, but life and peace should always be the goal.

It’s interesting to surmise other meanings for this series as a whole. If it is viewed as a skewed retelling of WWII, what does it say that the Yamato is fighting against stand-ins for Nazi Germany, its own ally during WWII? Perhaps it can be seen as a way for the Japanese psyche to atone for some of the horrors of that war, that it’s fighting against its own allies and, perhaps, its own once-imperious nature.

While I certainly can agree with the sentiment of Kodai’s speech, some of the specific things he says come off as very naive. He says that they should not have fought the Gamilas, that they should have shown love and compassion. How? How would Kodai have treated the Gamilas differently? Allowed the Yamato to be destroyed so Earth will die and Gamilas take over? Given the Gamilas’ arrogance, it’s unlikely they would have accepted any offers of assistance.

This war was not caused by some misunderstanding between the two races. The Gamilas were the out-and-out aggressors. As a result, Earth had to endure its own struggle for survival. The Yamato didn’t even come to Gamilas willingly, they were pulled in and forced to defend themselves! Also, the decision to destabilize the planet wasn’t Kodai’s idea, but Okita’s. Okita, a man who once put his ship at risk for the sake of little blobs of jelly on Pluto, saw attacking the planet itself as the only viable option.

Wildstar and Nova return to the bridge, and soon the Argo resumes its journey. With Iscandar in front of them, Avatar addresses the crew from his bedside microphone, thanking them for all their work. As we see the Argo head toward Iscandar, they use the stock flyby scene, which shows the third bridge back in place. While we could just dismiss this on the grounds that they were reusing animation, we will see in the next episode that the third bridge is actually restored in time for splashdown. The repair crew has gotten its job down pat. They even have time to take a break and stare at Iscandar from the forward gun decks.

Production note: the ship departs Gamilas on April 26, 2200, but the original Japanese narration indicates the date as March 27. This could have been an attempt to tie in with the March 1975 broadcast of this episode.

One thought on “Episode 24 Commentary”