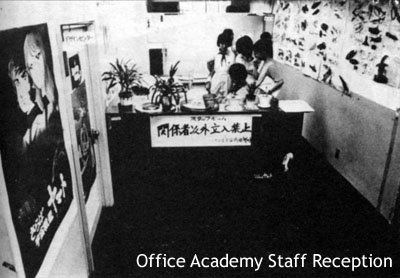 As the end of 1977 approached, Producer Yoshinobu Nishizaki convened the staff’s first brainstorming meeting on December 13. Leiji Matsumoto, Toaru Yoshita, Tomoharu Katsumata, Aritsune Toyota and the other writers gathered at Office Academy studio to work out the story for Farewell to Yamato. Series 1 writer Eiichi Yamamoto had also joined the group by this time, but was not in attendance.

Toyota’s contribution was presented in the previous article. Based on his outline and Nishizaki’s initial proposal, various ideas were eliminated and others were preserved in the ongoing process.

It was universally agreed at this meeting to keep Toyota’s concept of an artificial, mechanized planet as the weapon of the enemy that would invade Earth. It was also agreed that one of the new characters should be a big, brash sportsman-type who would be strongly differentiated from Kodai and Shima. The concept of a powerful witch-like character on the side of the enemy was also approved, along with a mysterious, beautiful girl as her opposite number on the side of Yamato. One by one, they would evolve into Saito [Sergeant Knox], Sabera [Invidia], and Teresa [Trelaina]. 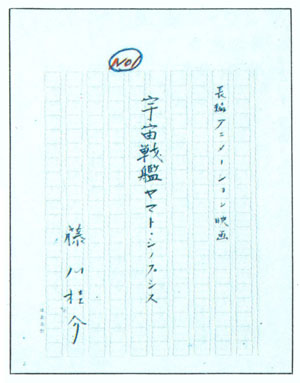 Following this meeting, the reins were taken by Keisuke Fujikawa, the head scriptwriter of Series 1.

The Earth was saved by the heroic effort of Yamato and was restored to full health. People leave the underground cities and return to the surface. They begin rebuilding. “Remember Yamato” becomes the motto of the reconstruction.

The crewmembers of Yamato, finished with their unprecedented journey, each submit a report to Earth Defense Force Headquarters. They are relieved from active duty and re-assigned as reserves to different departments. The last chains of despair are finally cut from their hearts as the recovery is completed.

The EDF is revitalized and a new defense plan is made so as not to repeat the mistakes of the past. New members go on duty at various posts in the solar system, incorporating Yamato‘s former crew as advisors. Friction between them happens constantly. To these new EDF members, all the newly-built ships are state of the art, and Yamato is just a relic. For the former crew, the humiliation is unbearable. 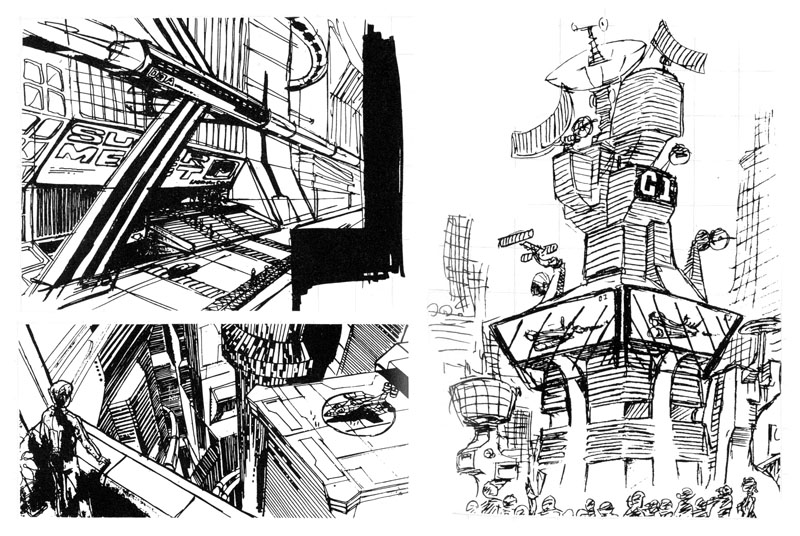 The people who enthusiastically welcomed them home are now preoccupied with reconstruction. Visitors to Hero’s Hill, the monument where Captain Okita is buried, are now sparse. This is the only place where Yamato‘s crew feels free to express their pent-up frustration, and Dr. Sado is a good person to talk with. 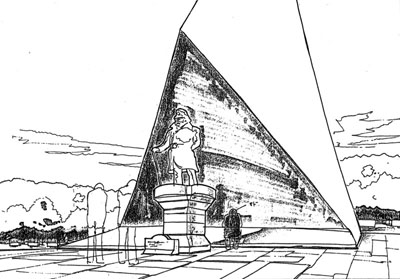 “It is a good thing that Yamato‘s mission has ended.”

Sado bears no resentment toward those whose minds have changed. Now “Remember Yamato” is only a slogan among the former crew.

It is during this time that an intergalactic race appears and begins to conquer one solar system after another. They wander from place to place, completely driving out different races and cultures wherever they are discovered. By the time they arrive here, thousands of star systems and millions of people will have experienced this baptism of violence.

The leader of this race is the revived Dessler of Gamilas. In his last battle against Yamato, he was injured and set adrift. Saved by the nomadic race, he plans a comeback with only Yamato in his heart. Overthrowing Yamato is the key to his dream of rebuilding the Gamilas culture. He uses this nomadic race toward the achievement of that goal.

When those who were attacked by Dessler come to Earth one after the other begging for help, those who are rebuilding the planet begin to fear old demons again.

An investigation by the Earth Defense Forces learns a little about this violent race, but much is still unknown and there is great anxiety. Besides this, there is the internal problem of what to do about the refugees. A global demand arises for them to be rejected.

Kodai is speechless. This event should not be seen as another world’s problem. Their pain should be seen as our pain. But the people of the reconstructed Earth no longer have such confidence.

Finally, a compromise is made and it is decided to send the refugees to a safe place. Yamato and her crew are assigned as their protector, but Yamato no longer has the energy for this task; most of it was exhausted on its 296,000 light-year journey. Some crewmembers drop out and are replaced by new members who are still in combat training.

Soon, Yamato departs with the refugees. The logic of Kodai’s compassion is not entirely understood by the new crewmembers, some of whom appear to have disregard for Yamato.

The refugees pray for a safe journey as the trip into vast outer space begins, but they are suddenly attacked and a horrible figure appears: the nomadic people of space!

Yamato fights back with limited weaponry, trying to conserve energy, and is damaged. The emperor of the nomadic race instigates Dessler to throw down the gauntlet.

Kodai is surprised to see Dessler, and is rebuked by the new crewmembers. After a hard fight, Dessler is finally buried forever and Yamato obtains the last of his energy.

However, a gigantic fortress then appears in front them, unlike any seen before.

Yamato is forced to return to Earth.

This huge fortress is the battleship of the Empire of Planet Ten, which was not noticed by Earth since it was on the far side of the sun. The Emperor suppressed all those beneath him. He has now gained overwhelming power and the conviction that no other race besides his Planet Ten Empire is qualified to survive.

Yamato returns to Earth and reports on the appearance of the huge space fortress. The Earth Defense Headquarters rushes completion of a new battleship and declares a global state of emergency.

The new crewmembers are transferred to this new ship and Kodai takes the original Yamato crew out on surveillance. No one on Earth even mentions Yamato any more, placing all their expectations upon the new battleship. Nothing Kodai has to say influences them either.

Yamato is ordered dismantled for the sake of the new ship. Kodai desperately resists, but his efforts are futile. 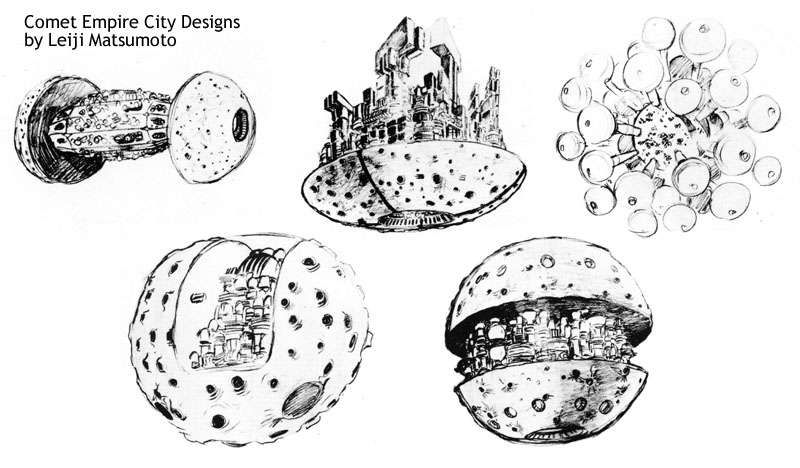 The huge fortress approaches the Earth and the new battleship carries all the planet’s hopes as it launches.

Shima, who has been assigned to space observation duty, reports an abnormality in the behavior of Halley’s Comet, but no one takes it seriously. The comet should not approach Earth again until 2128, but now its approach is calculated for 2204. Because of its low mass, however, it should not exert any influence over the Earth.

This abnormality has been consistent for three years according to Shima. Kodai understands and orders him to conduct a thorough investigation.

The new battleship comes into contact with the huge fortress in space, and the fortress withstands its initial attack without budging, like a boxer who readies a counter-punch while completely exposed to repeated blows from his opponent.

When that counter-punch is finally thrown, the new battleship disintegrates in an instant. The shock and surprise at EDF headquarters is beyond imagination. But when the fortress crosses the solar system, it does not approach the Earth.

The time comes for the mystery to be revealed: Halley’s Comet is rapidly heading straight toward Earth. Moreover, it has been given a powerful gratitational field. When it impacts the Earth’s gravitational field, and then the surface, it will destroy the current balance and Earth will be sent hurtling off into distant space.

This is the goal of the Emperor.

There are X more days to Halley’s approach.

How should it be prevented? The comet’s influence gradually begins to affect the Earth.

All those on Earth are confused. Should they just sit and wait for death?

Kodai offers the service of Yamato. This surprises even the hesitant EDF. What strength does Yamato have left?

Kodai has decided to bet on the outcome. If the people of Earth entrust their future to him and he removes the threat of Halley’s Comet, they must devote themselves to the cause of peace for all of space.

The Earth Defence Force headquarters is unable to stand in the way of a nonviolent solution. The passion of Kodai is very moving to his Yamato comrades.

Damaged and crumbling, Yamato launches. There is no promise that it will return. 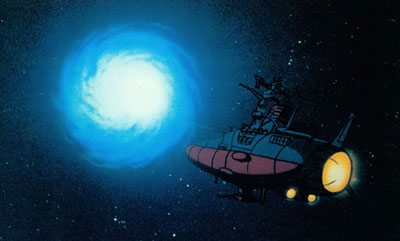 Seeing this, the huge fortress starts a violent attack. Yamato desperately resists as Kodai and Sanada remove the gravity generator that was installed in the comet.

Finally, the generator stops. Halley’s Comet skims close to Earth, then flies on.

Then Yamato confronts the fortress and the entire crew is lost while fighting to the last. It is a sight beyond all common sense.

Yamato is scattered to space.

Continue to the Making of Farewell to Yamato, Part 4: The Toshio Masuda Draft