International access to Space Battleship Yamato: Resurrection Chapter finally became a reality in July 2010. The film had its first outside-of-Japan screening in Canada, and the long-awaited release of the Japanese DVD now brings it into the reach of fans around the world. We’ll examine both of these events right here! 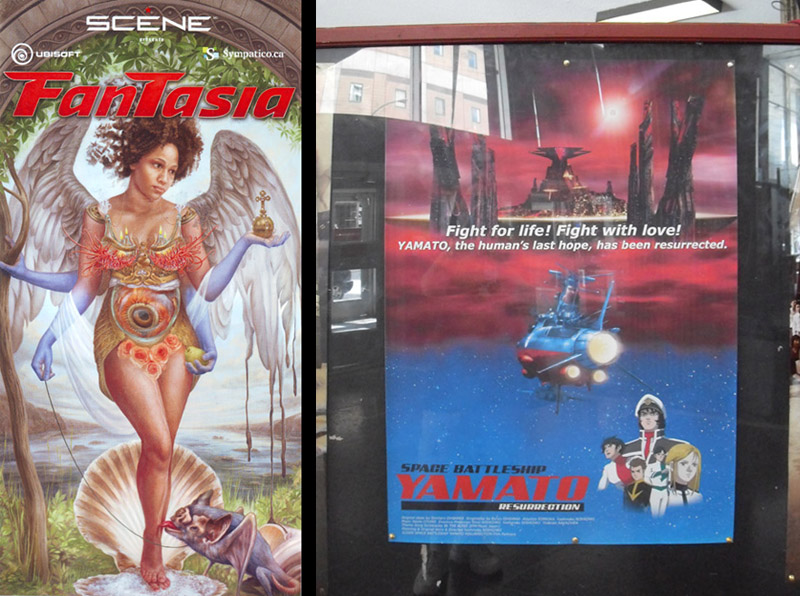 Sure, I knew there was a new Yamato picture, but I didn’t think it would be making any kind of appearance in North America until the (hopefully) localized DVD release. And yet there it was on the Fantasia schedule, Space Battle Yamato: Resurrection (sic).

Since 1996, Fantasia has been Canada’s preeminent genre film festival. This year’s schedule included 85 feature films from around the world; everything from Hollywood blockbusters to Hong Kong action pictures to Serbian atrocity horror. Assisted by a wide variety of corporate sponsors, the support of the municipal, provincial, and national cultural community, and a committed, professional staff, Fantasia is a world-class film festival experience. And of course, I only find out about it because they’re showing an animated film about a space battleship.

Tickets purchased online, we loaded up the car and headed down the 401 to Montreal. We rolled into town late Saturday night in a sudden downpour that in no way dampened the spirits of Montreal’s late night crowds of fun-seekers. Once the rain stopped and we’d checked into our hotel, we joined the throng and walked a few blocks up to the venue to get our bearings for tomorrow, pick up our tickets at the will-call, and stare at the Yamato poster for a little while.

When we arrived at the Concordia University hall for the noon Sunday screening, there was already a line. I wasn’t sure how popular a Yamato film would be at this festival, but as showtime approached the line kept growing. Soon it was around the corner and reaching up the next block.

Once inside we took our seats–lecture-hall seats with the little foldout desktops–and waited for the film. One festival organizer came down and gave a little “welcome to the festival” speech. In French. Another festival organizer gave away T-shirts to audience members brave enough to take their shirts off. This being Montreal, members of both sexes participated. This was also conducted in French. I began to worry. The film listing had described it as ‘subtitled’, but French subtitles wouldn’t help me at all. Another festival organizer gave an introductory talk about Space Battleship Yamato, Leiji Matsumoto, Star Blazers, and a little background on Japanese animation as pertains to the Quebecois audience (in other words, mentioning Goldorak). This was also in French. I continued to worry.

The house lights dimmed, we saw a lot of trailers, the movie started. Presented with the endless expanse of outer space, the soundtrack filled the theater with Miyagawa’s Endless Expanse Of Outer Space and instantly my worries vanished. It didn’t matter what language this film was subtitled in–it’s a Yamato film, everything is going to be all right.

Better than ‘all right’ in fact. Yamato Resurrection is a terrific film. The animation is superb, the pacing is a lot tighter that we’re used to with Yamato pictures, the storyline is sweeping and epic, and what’s most important is that at its heart it’s a Yamato film, full of heroism, heartbreak, and all the melodrama of the endless oceans of the universe.

If you’re at all interested in the film you’ve already read the synopsis here, unless you want to avoid spoilers. Suffice to say, Earth is again threatened, this time by a Cascading Black Hole. The human race is being evacuated to the planet Amare in enormous refugee fleets. Even this slim hope of survival is threatened, however; the first two fleets have been attacked by a unknown alliance of different star systems. The rebuilt Yamato, captained by an older, taciturn Susumu Kodai, is launched to protect the third refugee fleet and to discover who lies behind these attacks.

This is a grand space opera, and while it plays upon themes that we’ve seen in Space Battleship Yamato for years, Resurrection is perhaps the first Yamato film to really strike the perfect balance between cosmic and human tragedy. The ‘ocean of outer space’ metaphor has never been stronger, particularly in a vast battle scene set near the cosmic whirlpool of a black hole, and the final showdown with the battle fortress of the S.U.S.–an enormous leviathan submerging and surfacing at will from the boiling waves of hyperspace–is a real cinematic spectacle.

The animation is top notch and the computer-animated ships merge seamlessly with the more traditionally animated characters, bringing Space Battleship Yamato firmly into the world of 21st-century animated feature films. The character designs have moved away from the rounded 70s-80s look of earlier Yamato films, but that’s OK, I don’t look the same as I did in 1978 either.

Subtitled in English, Fantasia screened a flawless digital print. The appreciative audience laughed, gaped in awe, and fought back tears along with Yamato, and applause greeted the end of the film. My advice? Do not miss any possible chance to see this film in a theater, even if you have to drive five hours and battle Montreal traffic. It’s totally worth it.

Postscript: it was announced on July 29 that the movie was awarded the bronze prize in the “Best Animated Film” category! 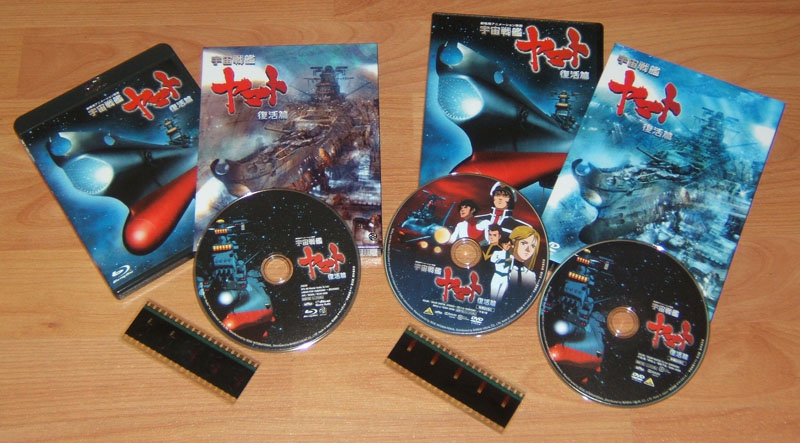 Sedic International is a new participant in all things Yamato, both a sponsor of the film and the manufacturer of the DVD. They also happen to be the source of the subtitled print that was screened in Montreal. Bandai’s Emotion label has been the distributor of all Yamato home video products since 1989, and Resurrection is no exception. 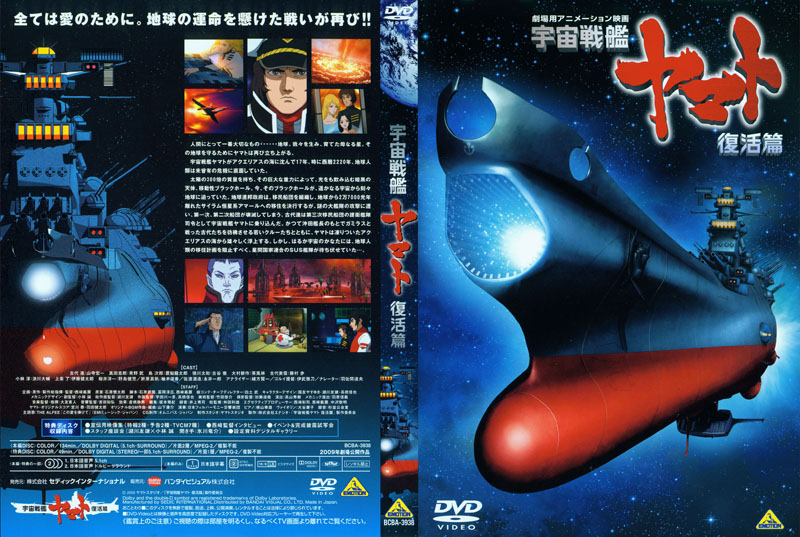 Picture quality aside, the standard Region 2 DVD (BCBA-3938) differs from the Blu-Ray edition (BCXA-0269) in only two respects; the bonus features are on a separate disc and the slipcase has a different color tint. Content-wise, both are identical. The first pressings contain a small strip of film cut from a 35mm print in a nice throwback to the early years when these were commonly offered as free bonus items with Yamato books or LP records.

The bonus features add up to 49 minutes and tick all the boxes one might expect. They begin with a collection of movie trailers and TV commercials followed by an all-too-brief interview with Yoshinobu Nishizaki.

There’s coverage of the first preview screening back in November 2009, in which fans were shown the film and then the alternate ending. Afterward, the massive audience of 4,000 fans were asked to vote on their preferred ending by waving the scarlet scarves found in their gift bags. As we know now, the “save Earth” ending won hands down. (Regrettably, despite all promises to the contrary, the other ending is not included on the DVD. Rumor has it that a director’s cut is in the works for future release, at which point the footage will finally see the light of day.)

The most touching part of this feature hearing Mr. Nishizaki’s voice break with heavy emotion as he thanks the crowd for their loyalty through the many years it took to get the film made. He also apologizes for his poor posture, explaining that he’d cracked a rib a few days earlier.

The longest of the bonus features is a 30-minute interview with the movie’s two creative leaders, Tomonori Kogawa (character designer) and Makoto Kobayashi (mecha designer). Of course, the language barrier will leave most non-Japanese viewers out, but it’s interesting to see them being interviewed by Ryusuke Hikawa, one of the veteran members of the legendary Yamato Association fan club.

The final bonus feature on the DVD is a collection of mecha images.

Within hours of its release, footage from the DVD was already posted on YouTube. There is plenty of Resurrection material to be found on our Links page, but here are some more to sweeten the deal…

TV commercials for the film

Montage with the Yamato ’83 theme