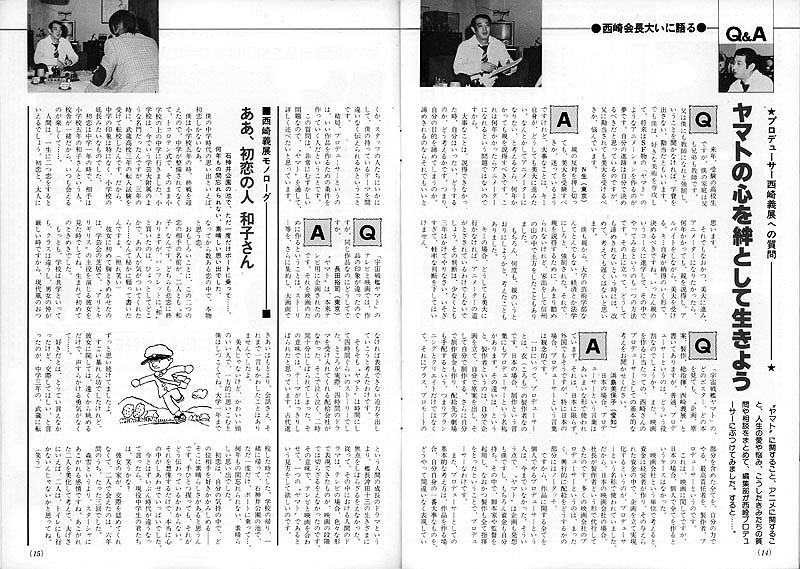 Let’s Live With Yamato as the Bond of Our Hearts

Yamato is an anime concerned with love and life’s troubles. Your questions and consultations were summarized by our editorial staff, who passed them on to Producer Nishizaki. Then…

I will take my high school entrance exams next year, and at home my father and brother are teachers. My father is forcing me to become a teacher, and if I don’t he will not pay my tuition expenses. However, my favorite major is art and it is my dream to make an SF anime like Yamato in the future. I think that I should be allowed to make my own decision, but I am worried about whether I should pursue my dream even if I am disowned by my father.

You wonder if you should take an entrance exam for art over the objection of a parent. This is important to you even though you seem to be hesitant. I think that if you want to advance in the arts and become an animator, you should try to persuade your parents even if it takes many years. Taking several years to become an animator is not a problem; I think the important thing is whether or not you can persuade yourself.

In other words, would you give up on your own goal? It’s all right if you can, but if you are determined to go to a school of fine arts and become an animator, you have to persuade your parents, get part-time work to pay your own school expenses, and take an entrance exam for the school no matter how many years it takes. You have to desire your future in a way that is convincing to you.

For now, another choice for you is to enter the school that your parents recommend and improve your skills there. If you still cannot give up your dream after doing your best there, you can consider it again.

I wanted to go to a school for the arts, but my parents objected and I was forced to choose between economics or law. I don’t recommend that you do what I did; I ran away from home and became a construction worker at the mountains of Shinshuu. Of course, I thought many times whether or not I should do as my parents said.

In your case, going to art college is not the only way to become an animator. Take at least three years to think about it and make a decision. Don’t rush to make a rash judgement.

When I see a poster or a book for Space Battleship Yamato, it usually says “Planning, original concept, production, and total supervision by Yoshinobu Nishizaki.” What kind of role is customary for a producer?

Also, please tell us your basic thoughts about making a movie.

In Japan, the word Producer used used ambiguously. This is not limited to Japan; it is also the case in foreign countries, but here in particular it is an idealogical term. In a word, a producer is the founder of a company.

In the case of Japan, the word Producer is contained in “Production.” The difference is that they make their own plan, develop their own idea, and create it themselves. Furthermore, a producer can even arrange the funding for distribution to theaters, over and above planning and creation. Everything, including promotion, is within a producer’s power.

The highest form of a producer is the Executive Producer, though in Japanese movies this is not always the case. In terms of a movie company, the manager makes a budget and the person who works within that budget to materialize the project is called a Producer. So in the case of Japan’s movie companies, the president of the company deputizes others to create the product.

In many movie companies, the producer has nothing to do with the department that handles distribution. Therefore, a person with the Producer title who works on a project at every level hasn’t really existed until now.

In this respect, Yamato was my own concept and I arranged the funding as well. I appointed the scriptwriter and all the mid-level supervisors, is this is the reason I can be called the overall supervising producer. The basic thought is that when a producer makes something, he must make sure the most important ideas are conveyed to the staff and that the theme is properly expressed. Ultimately, the producer has to create the conditions for making a good movie.

Because this is a difficult question, I want to explain it in detail through Yamato.

My impression of Space Battleship Yamato is that the movie and TV versions are different. Why are they considered the same work?

Yamato was originally planned for TV. The story was consolidated for the movie, and I thought we should give it an impact that was not possible on the small screen.

The first version of the movie was a story that ran for four hours, but there was no distribution company that would accept a film that long. Therefore, I tearfully had it reduced to two hours and ten minutes. In so doing, I thought the theme was made more clear. Rather than the drama of Kodai’s growth, the focus was more on the life of Captain Okita.

Accordingly, the TV version was capable of expressing a wider variety of ideas in a way that the movie could not. In that sense, the TV series and movie together should be seen as “one Yamato.”

I only took one boat ride in the pond of Shakujii Park, but it was a magic memory that stayed with me for years…

As for my memories of Junior High School, there is only that of first love.

My first love came in year one of junior high, and her name was Kazuko. She was in fifth year elementary. Because we were in the same school building, it was always fun to meet. It might have been said that we two would be in love forever. We experience many loves as we grow to adulthood, but that first love is the real thing.

Interestingly, at both of these stages of love, the girls were both named “Kazuko.” Both loves ended tragically. The reason I wrote “Kazu” in the pamphlet [movie program book] is that it was my secret wish for her to see it and remember me from somewhere…

The first time I noticed her was in a school play of The Ant and The Grasshopper, in which she played the lead. It was the first crush of my life. (Embarassed smile.)

Even if a school is referred to as co-ed, it is different within class. It was a time of strict gender roles even compared to present day, so we had not exchanged even a word before then. Though she was not a beautiful woman, I persistently thought of her as a bright and pretty person. I continued to think so throughout my junior year. Even though I was a great hooligan, I only watched her from afar without the courage to speak…

I could not bring myself to ask for her friendship until my third year of junior high, when I was transferred out. After school, we got together and went to the pond at Shakujii Park. We took only one boat ride…but it was a magic memory that stayed with me for years.

Thinking back about one’s first love…I think there is magic in thinking deeply about your partner. Even when we held hands, I could not understand how it was transmitted. I just imagined that my heart was full of happiness. Now that I say it in a very different time, does it cause those of you in junior high to laugh?

Because her parents didn’t approve of our association, we were alone together just three times over six years. It was like adoring Starsha rather than Yuki Mori. I idealized both of the girls I adored. I believed they were too beautiful even to use the bathroom. (Laughter)