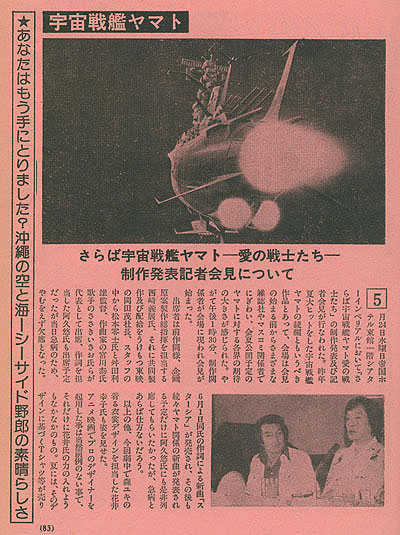 About the Production Announcement Press Conference

The production announcement press conference for Farewell to Yamato took place on Wednesday, May 24 at the east hall on the first floor of the Imperial Hotel. It is the work that should be called the sequel of Space Battleship Yamato, which was the big hit of last summer. Before the event, the hall was crowded with people from various magazines and the mascomi [mass communication/mass media] industry. One could feel the high expectations at every level for Yamato and the upcoming summer.

Those from the production staff appeared at 1:30pm to begin the interview. The persons present were Yoshinobu Nishizaki who supervised the previous work and is the executive producer for this one, Toei President Shigeru Okada in charge of joint production and distribution, Leiji Matsumoto and Toshio Masuda of the staff. Representing the music side were Composer Hiroshi Miyagawa and singer Isao Sasaki. Lyricist Yu Aku was also scheduled to be in attendance, but was unavoidably absent due to a sudden illness that day. The new song with his lyrics, Starsha, Thoughts Among the Stars, was released on June 1.

In addition, clothing designer Yukuko Hanai was also there to show her costume design for Yuki. Naturally, it is unprecedented to have a professional fashion designer appointed to an anime movie, and it is quite a good thing for Ms. Hanai’s skill to be included. As a point of interest, T-shirts and other items based on her designs are scheduled to be marketed this summer.

Before the question-and-answer session, Producer Nishizaki began by describing his intentions for Part II. The theme inherits and builds upon the previous Yamato film, from the love of mankind to the love of space, and it seems that there is no change to Yamato‘s role as a “ship of love” in Part II. A great, beautiful woman named Teresa appears this time in place of Starsha from Part 1. A very large poster of Teresa giving prayer in vast outer space was positioned at the room’s entrance, which expressed the unique world of space [adventure] roman.

Photographs of the many battleships and fightercraft that appear in Part II were displayed at the front of the room. All were quite well conceived and thought out, and are likely to satisfy the mecha mania. Though even if one is not an animator, one wonders how they will look as moving animation. 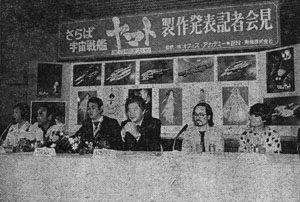 A member of the press corps asked, if Part II was popular enough could there be a Part III, but there had been no thought about this. The hope of making a Takarazuka [opera company] musical was briefly expressed, but the problem was mentioned about how fans would take to the casting for Kodai and Shima now that they have become idol characters in animation.

According to Leiji Matsumoto, Space Battleship Yamato would have a direct “confrontation” with Star Wars this summer. He said that though Star Wars is well-produced and resembles Yamato in design, it is of course understood that Yamato was made earlier and cannot be mistaken as an imitation. He wanted to make sure that Yamato was understood to be the “head of the household.”

Producer Nishizaki said it would be inspiring, and “be sure to watch.”

The completion date is planned for July 28 with the premiere on August 5, and everyone wants to do their best work even if the production goes all the way to the last minute. After all, when the first series was broadcast from 1974 to ’75, the production staff similarly worked to the very limit and still did a respectable job.

The production staff of Part 1, which impressed fans all over Japan, is meeting the challenge for Part II with the same mind and attitude toward production. We can expect this staff will live up to its promise.

The press conference ended at around 90 minutes. Yamato is pointed toward summer and has started its engine.

This article was written by a woman from this magazine’s press pool, who is also a Yamato Maniac. How could this be? When speaking about Yamato fans, women do not immediately come to mind. Therefore, she was accompanied by a male reporter/Yamato maniac who wrote another article about the same press conference. Is there really a difference between men and women? 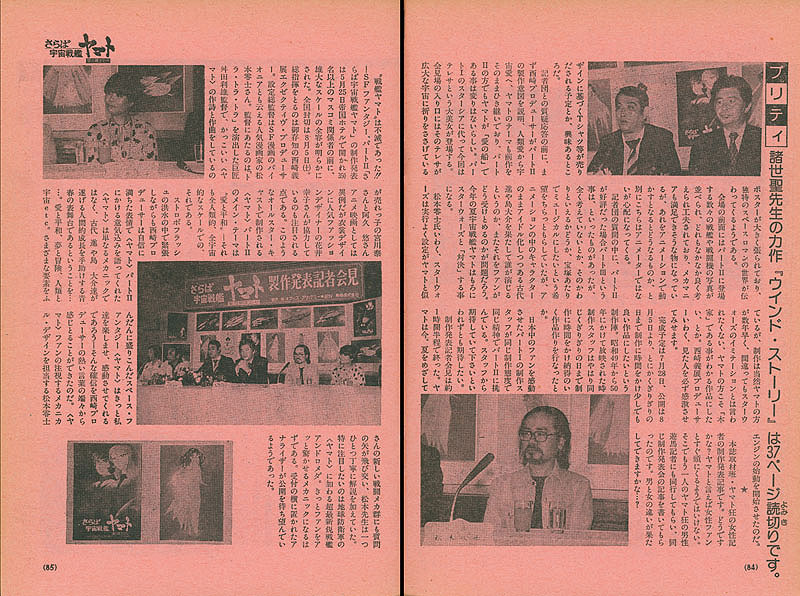 The production announcement of the SF fantasy Space Battleship Yamato Part II, Farewell to Yamato, was held at the Imperial Hotel on May 25 for more than 350 publicity people, and the grand scale of the entire story was revealed.

The premiere is Saturday, August 5. It is known that Executive Producer Yoshinobu Nishizaki is in charge of supervision. The general manager of design is popular comic artist Leiji Matsumoto, who can be called the pioneer of SF comics. The director is the great Toshio Masuda, who worked on Tora! Tora! Tora!

Attention was paid to the point that popular fashion designer Yukiko Hanai is collaborating on costume design, and the exceptional composer Hiroshi Miyagawa will work with lyricist Yu Aku to make stylish Yamato music. Produced by an all-star cast, the main theme of Yamato Part II is the “love and peace” of all mankind in the vast scale of outer space. 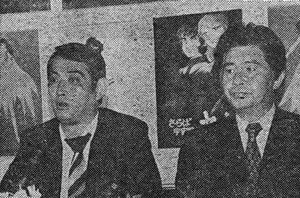 Even in a flood of flashing strobe lights, the expression of Producer Nishizaki was full of confidence. The eagerness with which Yamato Part II was discussed was not merely for its mecha. Young people are helped by the growth of Kodai and Shima with their accomplishments. Love, peace, dreams, adventure, humans and space…Yamato is a space fantasy of various elements that delight us all.

I was able to feel such conviction because of the passionate words of Producer Nishizaki.

The arrow of a question flew toward Leiji Matsumoto, in charge of the mecha design that is closely watched by fans, and master Matsumoto explained each one carefully. Especially noteworthy is the state-of-the-art battleship Andromeda that joins Yamato in the Earth Defense Forces. It is sure to become a mecha that delivers a big surprise to fans.

Analyzer stood nearby and seemed to look forward to the release.