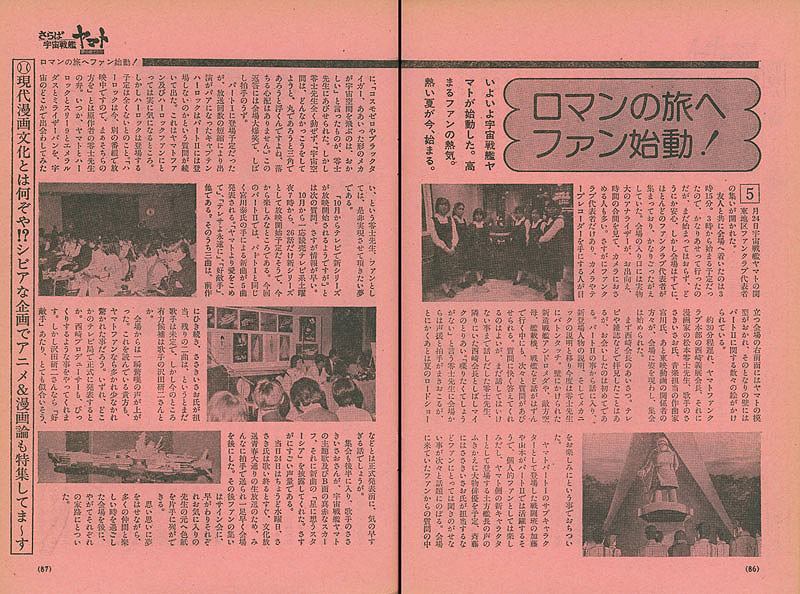 A meeting of Space Battleship Yamato Kanto district fan club representatives was held on May 24. I arrived at the meeting hall with a friend at 3:15. We were in a considerable hurry because it was scheduled to begin at 3:00, but we were relieved that it had not yet started. Most of the fan club representatives had already arrived, and it was quite jammed. 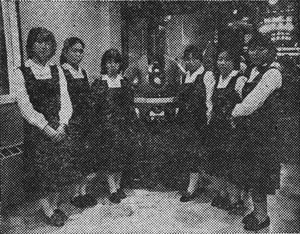 A full-size Analyzer stood near the entrance of the meeting place, and many people used the interval to take photos. As expected, they were all fan club representatives. A model of Yamato was placed on the front right of the room where a good many cameras and tape recorders were being held, and a number of paintings from Part II were on the wall nearby.

About 30 minutes later, the meeting was begun by Yoshinobu Nishizaki, the president of the Yamato fan club headquarters. With him was manga artist Leiji Matsumoto, singer Isao Sasaki, music composer Miyagawa, and people from Toei Animation Studio.

President Nishizaki’s greeting came first. I had seen him on TV and in magazines, but this was the first time in person. He talked about Part II with an explanation of the new characters and then passed the baton to Leiji Matsumoto to discuss the mecha. The newly-built battleship Andromeda and an enemy aircraft carrier were there on the wall. The conversation went from battleships to fightercraft and more. It was good of Matsumoto to willingly answer so many questions, but he began to say things that weren’t supposed to be said yet and President Nishizaki scrambled for the mike.

“I wish I could say more,” Mr. Matsumoto said. There was encouraging applause, but this calmed down when he settled on telling everyone to enjoy the film this summer. 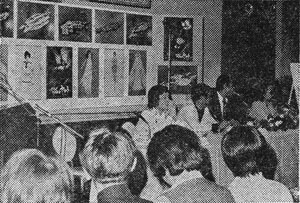 Fans were pleased to learn that Kato and Yamamoto [Conroy & Hardy], who appeared as sub-characters of the [Black Tiger] battle group in Yamato Part 1, would have active roles in Part II. The new character Captain Hijikata [Gideon] is an important figure on the side of Yamato, and there was much talk about Isao Sasaki providing the voice for Saito [Knox], something that cannot be missed.

During the question period, one fan said, “I think it is wrong that mecha with such designs as the Cosmo Zero and Black Tiger could fly in space.”

This was answered by Leiji Matsumoto, who took it in stride.

“Whatever the design is, whether round or a triangle, they can all float in space. There is no worry about falling off.”

The room was filled with a large burst of laughter and a round of applause.

There was a question about whether Captain Harlock, whose appearance in Part 1 was ruined by shortening the broadcast, would appear in Part II. This was an interesting point for both Yamato fans and Harlock fans, but there is no plan for him to appear.

“Harlock is now being broadcast on a different TV program,” explained his author Mr. Matsumoto. Someday Yamato, Harlock, Emeraldas, Galaxy Express 999 and Miraizaban would all meet in space somewhere, he said. For a fan, such a thing would be a dream come true.

“It seems a new TV series will begin in October,” was the next question. As expected, the information is known early. The tentative plan is for a new series of 26 episodes to start on the Yomiuri network Saturday, October 7 and we are all looking forward to it. 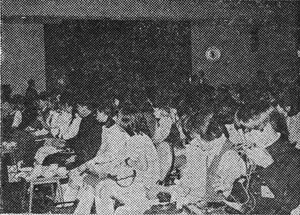 It was announced that five new songs from the hand of Hiroshi Miyagawa will be released from Part II as well as Part 1: From Yamato With Love, Teresa Forever, The Rival, and others. Three of these will be recorded by Isao Sasaki. The singer for the other two is still undecided, but Kenji Sawada is a strong candidate. At this mention, murmurs of amazement momentarily rose in the room.

If you are a Yamato fan reading this, it may surprise you, too. It will be formally announced on TV soon. It is characteristic of Mr. Nishizaki to attempt such a thing, but it is too early before the official announcement to say if Kenji Sawada is well-matched to the task.

The meeting entered its second half, in which Isao Sasaki performed the Space Battleship Yamato theme, the B-side Scarlet Scarf, and the new song, Starsha, Thoughts Among the Stars. The volume of his voice is truly amazing. As soon as he finished singing and receiving our applause, Mr. Sasaki left for a live [radio] broadcast of Youth Main Street on Nippon Cultural Broadcasting.

After the event, this fan gathering quickly turned into an autograph session. Fans stood in line to get the autographs of their favorite people. After fulfilling their dreams, the fans concluding their great time with their friends and left the meeting place for home.