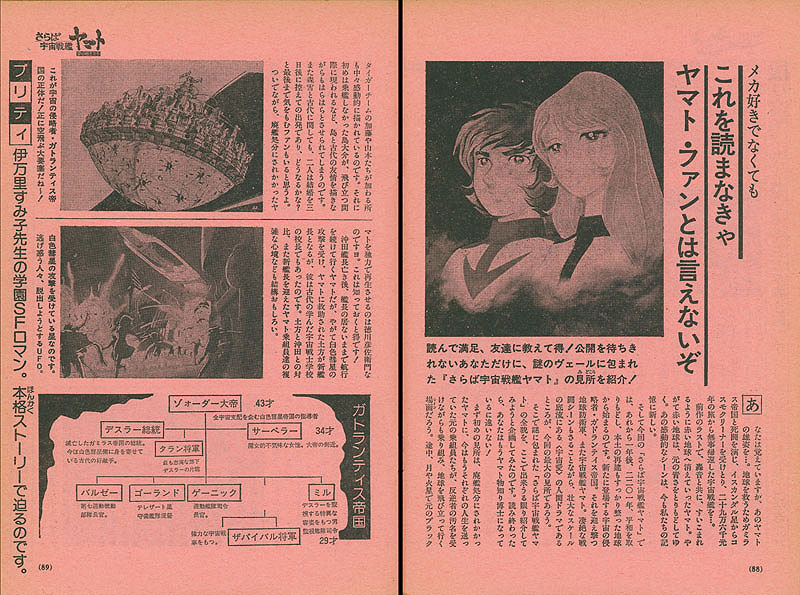 To those of you who just can’t wait for the premiere, we introduce the highlights of Farewell to Yamato that have been wrapped in a veil of secrecy. You cannot call yourself a Yamato fan if you don’t read this and share it with your friends!

Remember the majestic figure of Yamato, the space battleship that struggled desperately against the Gamilas Empire to retrieve the Cosmo Cleaner from Planet Iscandar and return from a trip of 296,000 light years to save the Earth. In the last scene of the previous work, Yamato rumbled toward the red Earth. As it was taken in, the Earth regained its original blue. That moving scene lives now in our memory.

Farewell to Yamato takes place one year later in 2201, when the peaceful reconstruction of Earth is beginning and the mainland is already completely in order. 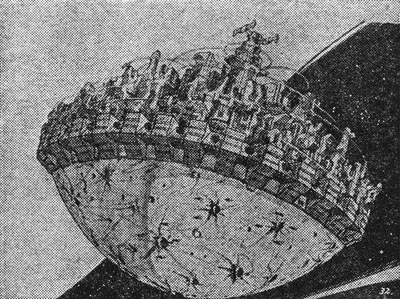 A new invader appears, the Gatlantis nation of space. Space Battleship Yamato and the Earth Defense Forces rise up to confront it. Other than furious scenes of battle, the true highlight this time is the drama of human beings (“space love”) that exists as an undercurrent on a grand scale. Therefore, we plan to present as much as possible of the entire content of Space Battleship Yamato, which has been wrapped in mystery. You will be a knowledgeable Yamato scholar after you finish reading!

The first highlight point is that Yamato is about to be decommissioned. The original crew has gotten on with their lives, but they come back to the ship and fly away from Earth even at the risk of being branded as traitors. Shima was not on board at first, which created tension in his friendship with Kodai, but he appears just before takeoff. Midway between the Moon and Mars, Kato and Yamamoto and the former Black Tiger Team join up in a moving scene.

With respect to Yuki and Kodai, this departure happens three days before they were meant to be married. What will happen? Fans are concerned about how this will turn out.

Incidentally, Yamato was to be single-handedly decommissioned by Tokugawa [Orion]. After the loss of Captain Okita, his knowledge is very beneficial.

Yamato now navigates without a captain, but before long they receive news of an attack by the White Comet and Yamato rescues Captain Hijikata, who was the principal at Kodai’s space soldier school. The crew compares Hijikata with Okita and has mixed feelings about their new captain. 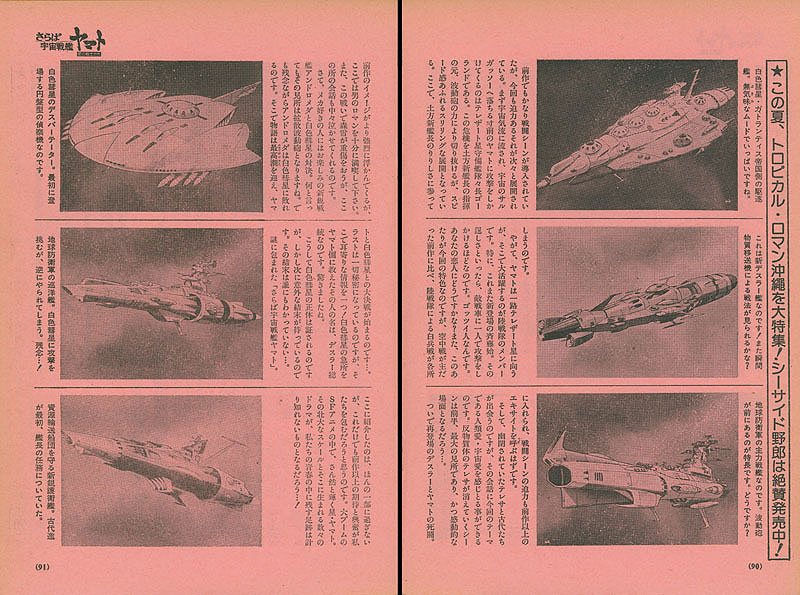 Many battle scenes were presented in the previous work, but this time their power increases one after another. First, there is an encounter with a space current. It is Commander Goland of the Planet Telezart defense fleet who attacks Yamato on the edge of a Space Sargasso. The new Captain Hijikata guides them through this crisis and the power of the Wave-Motion Gun is a thrilling development that overflows with momentum. This is where Captain Hijikata gains respect as the new commander.

Soon Yamato heads directly for Telezart where members of the land forces will take action. In particular, this is the debut of Hajime Saito [Sergeant Knox]. He spearheads an attack on enemy tanks and is a real tough guy. How about that for your sweetheart?

Compared to the previous work, the main characteristic of the battle scenes was aerial dogfights, but now hand-to-hand combat by the land forces is put into play and should be even more exciting.

Kodai meets the imprisoned Teresa, and the theme of human love/space love can be sensed in their conversation. The moving scene of Teresa’s antimatter body fading away is likely to be the impressive highlight of the film’s first half…

Next is the reappearance of Dessler and his desperate struggle with Yamato. Though the image of the previous work is strong, please enjoy the “roman of men” [manly poetry] to its fullest at this point. In addition, Yuki is seriously wounded in this fight, and the conversation here will very much move you to tears.

For mecha enthusiasts who enjoy the new battleship Andromeda‘s confrontation with the White Comet, it is said that the highlight will be the Dispersion Wave-Motion Gun. Unfortunately, Andromeda is defeated. Thereupon, the story approaches its climax as a grand decisive battle begins between Yamato and the White Comet.

Although the ending is a secret, there is some welcome information!

No one knows the ending…

Farewell to Yamato is shrouded in mystery.

Though only part of it was presented here, the expectation is that this will be more exciting than the previous work. The star of Yamato glitters brilliantly in the Big Boom of SF anime. The footprint it leaves in our youth will be immeasurable…!