on the Eve of Release 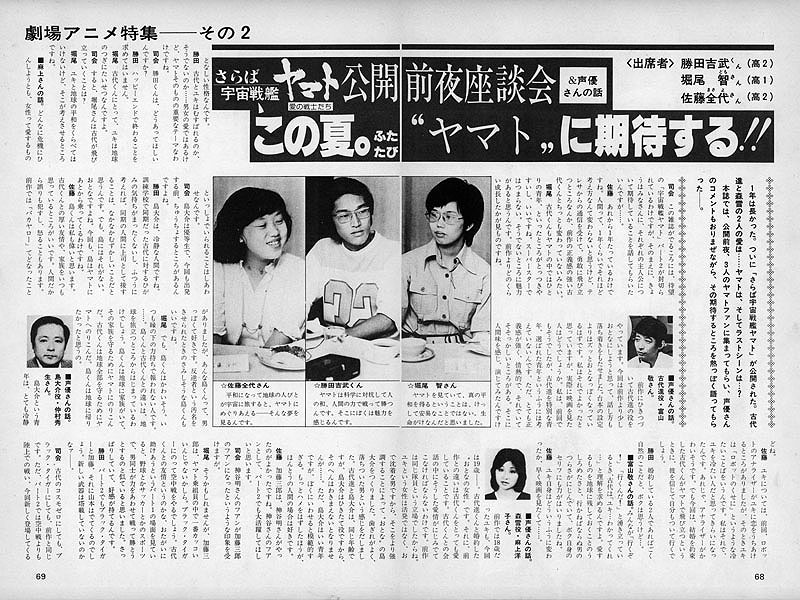 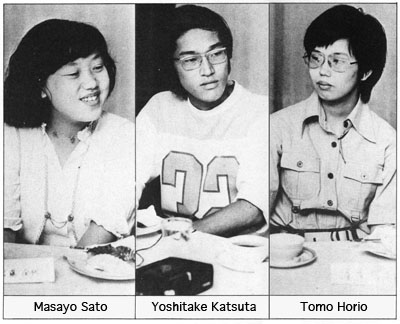 Yamato‘s power comes from the harmony of people; it fights and wins against cold science. I’m attracted to that.

Yamato showed me that it is never easy to obtain true peace.

When we achieve peace and people from Earth travel to space, they will find Yamato. That is my dream.

After one long year, Farewell to Yamato premieres at last. The love of two people, Kodai and Yuki…and the final scene? The night before the movie opened, this magazine sat down with three Yamato fans and talked enthusiastically about their expectations, mixing their comments with those of the voice actors.

Interviewer: When this magazine is published, the long awaited Yamato Part 2 will be out, but as for today I’d like to know what you expect for each main character…

Sato: It is a year later. I think that even though people don’t change much in a year, flying away bravely after receiving the message from Teresa does not seem strange at all for the Kodai of the previous film, who had a strong sense of justice.

Horio: It’s good that Kodai is just one of many young people on Yamato. He wouldn’t make a good superstar [celebrity]. It’s interesting to see how much he grew from the previous film. 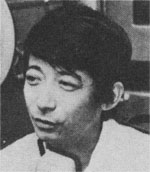 I continue to play the role of Kodai. I thought he would be a little more mature in the sequel, and speak with more presence of mind. He looks more adult in the design and the script. I thought this was good, but what about those seeing the movie? Kodai is a special young man, but I don’t think of him as a chosen one. His sense of justice is strong and passionate, but he also has a careless side. I felt that was a touch of humanity and played on it.

Sato: About Yuki last time, there was the scene where Analyzer expressed his love for her, and she spoke coldly to him as “a mere robot.” I came to dislike her, thinking of her as a cold person. I felt sorry for Analyzer. But this time Kodai promises to marry her when they depart on Yamato. She will believe him and follow him.

Katsuta: It’s only natural that the two of them would get engaged, but I think…

When everyone stands up and says, “Here we go!” “I’m going!” Kodai asks Yuki to “please understand.” It comes back to the pain of a man who must leave his loved ones behind. The power of that entered into my performance of the line.

Sato: I want to see the movie soon so I can see how Yuki has changed. 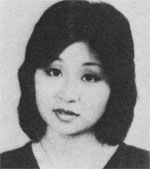 Yuki was 18 years old in the previous work, and she’s 19 this time. She is an “adult woman” engaged to Kodai. The difference from the previous work is that she loves him very much. Such love must come out when they are in conversation. She is with all the same people from the first work, but as a woman, Yuki has a gentler character.

Katsuta: It’s not just about whether Kodai and Yuki are together, the reason for the love of a man and a woman is an important theme of Yamato itself.

Interviewer: What would Mr. Katsuta like to see in it?

Katsuta: I don’t need it to have a happy ending.

Horio: Next to the Earth, Yuki is the most important thing to Kodai.

Interviewer: What do you think about Kodai flying off?

Horio: It is something to think about, though you cannot compare Yuki with peace on Earth. I agree with Ms. Asagami’s comment, a woman can hold onto her love for someone while on the verge of a crisis.

Interviewer: Shima is an officer this time, and he hesitates before flying off.

Katsuta: Shima is a calm person. He doesn’t have as much conviction as Kodai even though they trained together, and usually I think it’s difficult to treat someone your own age as your superior. But Shima isn’t like that, he’s an adult. He’ll board Yamato with the rest this time.

Sato: I think Shima is great, I always think of his strong friendship with Kodai as a good family bond. Because he’s a human being, he can make mistakes and get angry, like when he yelled out, “Idiot!” in the first series. I like that he looks more mature. He wouldn’t allow himself to be seen as a traitor.

Horio: But I feel sorry for Shima. He has a thankless job and is never rewarded. The difference between he and Kodai goes back to the beginning when they first left Earth. He boarded Yamato to defend his family and Kodai got on to defend all of Earth. I think Shima wanted to return to Earth [more than Kodai]. 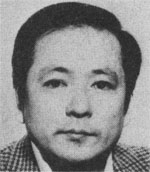 Though Shima is a young man, he is very calm and reassuring, so I emphasized him more as an “adult.” I gave him more of a mature feeling. Kodai and Shima are the same age, but you wouldn’t know it because Shima is more reliable. However, when I say he is a good young man, I wouldn’t want him to seem too good. To be like a true human being, he should speak out more often. 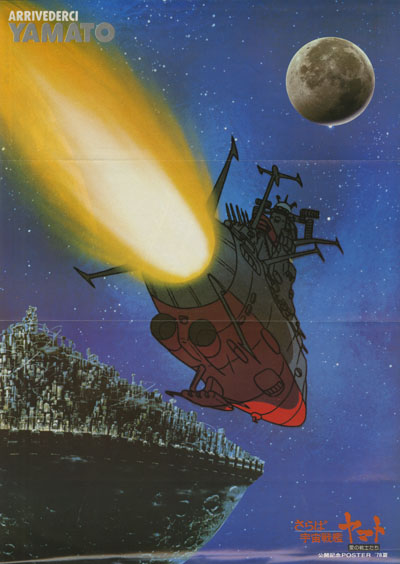 Sato: I think Akira Kamiya should come back as Saburo Kato [Conroy]. As a fan of his, I’d like him to have a big role in Part 2.

Interviewer: I get the impression that Kamiya’s fans became Kato’s fans.

Horio: Maybe so, he is Yamato‘s coolest crewmember when he flies a Black Tiger into a dogfight. In the scenes from Part 1 where he and Kodai help each other, I thought it looked like men teaming up in soccer or baseball. It’s a good, refreshing feeling.

Katsuta: Yamamoto will come back with Kato and the Black Tigers in Part 2. I wonder if they’ll have new weapons.

Interviewer: They would still be the Black Tigers from the previous work even if they fly Kodai’s Cosmo Zero. However, in Part 2 there will be an aerial dogfight over land. An action scene that is likely to spark interest this time is one where the new character Hajime Saito leads landing forces.

Katsuta: I am interested in a new character. Who is the voice actor?

Interviewer: Mr. Isao Sasaki. He [Saito] fights the land forces on Telezart, the Dessler corps, and also the decisive battle against the Comet Empire. 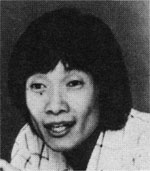 I don’t have many lines in Part 2, but I have an important role in helping Kodai. In Part 1, other actors were scheduled to work on it so I had to wait for a minor part to gradually appear. Therefore, the role was challenging. 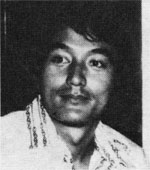 Saito is a rough and rugged man, so I had to use a low, deep voice. The hard part was not in making the voice, but because my nature differs considerably from his. He’s a brash outdoorsman and I’m just a spectator. Because I’m not really his type I would stand at the microphone with my feet planted far apart to feel like a big man while I was acting.

Interviewer: Sabera is a woman, but she’s also a chief staff officer in a cruel, cold-blooded empire. What do you think of such a woman?

Sato: The energetic feeling of ordering the men around is wonderful. Even though she looks cold and young, it could just be the different circumstances of her nation. A person could start out gentle and develop cold ambitions after repeated battles under a great emperor. What is the real Sabera like? 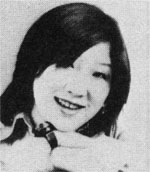 My orders for Sabera were that only her outward appearance is gentle, but her strength and coldness should come through in every word. Her age is unknown, but I thought of her being in her mid-twenties and tried to give her a precocious speech pattern. I had her speak without raising her voice even when she became angry. Her image would break if she seemed too powerful. 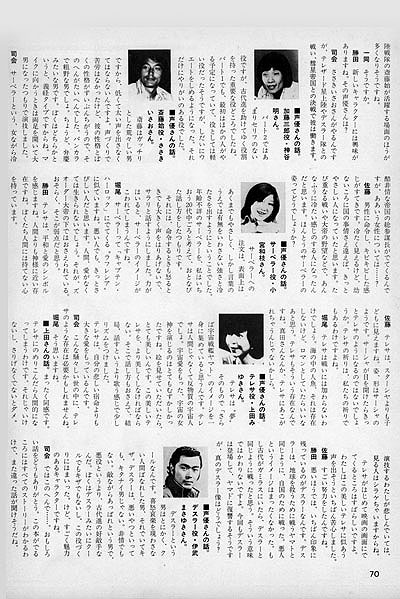 Horio: Sabera looks like “Lafressia” from Captain Harlock. I think that a bad person must also be a severe one. No human being could live a loveless life. Maybe that’s the disadvantage of being under Emperor Zordar.

Katsuta: Teresa seems like a symbol of love and peace, closer to God than humans. Her heart must be unattainable by a human.

Sato: She looks like the child of Starsha, her appearance and shape are like Sasha. If Sasha opened her eyes, surely she would become like Teresa. The prayer of Teresa is our prayer.

Horio: I don’t think Teresa would join in a fight. She’s like the romantic notion of a mermaid in the sea, which doesn’t exist. Teresa is something like that. Maybe Sanada would be attracted to her. 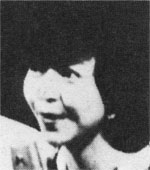 I think of Teresa as the “dream” image of Farewell to Yamato. She is not human…she’s a space person made of anti-matter. It was very difficult to play a love goddess of space. The picture of her is very beautiful, and I had to make her even more beautiful. She had to talk, after all, so I applied a rhythm to her a little to give the feeling that she was singing rather than speaking. Teresa’s love is greater than anyone’s sad fate.

Interviewer: The existence of someone like Teresa may be needed for such a troubled world.

Horio: I think so.

Miyuki Ueda: I do agree. If you put yourself too much into Teresa, she becomes too human. That is not right, so some subtle nuances are required to be non-human. If I, the actress, gets too sad or emotional, the audience detects it and cannot truly immerse themselves into the drama. Her first scenes are fantastic. I tried my best to match that image.

Katsuta: In terms of evil, Dessler makes the greatest impression. Dessler fights for his nation just as Yamato fights to save Earth. That is not the image of a villain at all. I think if Kodai were Dessler he would have fought for Gamilas the same way, no differently. Dessler appears again this time and seems to want revenge against Yamato, but what is his true nature? 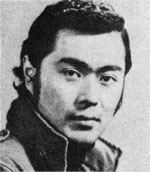 The man called Dessler is cool. He’s a man who doesn’t show his feelings, but he is affected nevertheless. Dessler is bad, but he’s not a corrupt man, nor is he cold-hearted. Rather than a villain, he’s admirable in spite of being an enemy, and he’s a worthy rival of Kodai. I was never as cool as Dessler, but I acted that way for the role. He’s a very appealing character.

Interviewer: We should finish here. Thank you for an interesting conversation. When this magazine appears, everyone will have seen the movie and we’re likely to hear a different conversation.