“Time is running out, but I want to do my best!”

Everything was passion and madness, but now Farewell to Yamato has been completed. The staff “looks back in time” to recall their excitement.

2. What part of Yamato Part 2 production especially made an impression on you?
(A hardship, a secret story, etc.)

3. “Yamato and I.” What is Yamato to you in one or two simple remarks?

(Responses printed in their order of arrival.) 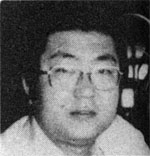 2. Creating the script and storyboard was very painful due to how long it took. There were four big storyboard books I had to carry up three flights of stairs every day at Toei Studio. Thus, both the storyboard and my body became tattered.

3. I have directed 100 different works so far (including both TV and movies), and any time I think of the best way to make something, I remember the first Yamato.

1. Although the original intention was for me to be an assistant director, basically my job was to check the animation. For some reason, that’s what it became.

2. Truly, it was the morning of July 20. There was a great commotion coming from the stairs, and the sound rushed into the Yamato staff room. “Sir, we’re all going to help you today!” All of Toei’s TV anime work stopped that day in an all-out rally to help Yamato get caught up. My honest impression was relief while I rubbed my tired eyes.

3. I’ve worked on Yamato for five long years. I’m going to end it with this.

[Translator’s note: After writing this, Tanahashi’s intention was postponed until after Final Yamato.]

2. During the scriptwriting, I wanted to go with the staff to Hawaii to see Star Wars and Close Encounters, but I didn’t get my passport in time and could not participate.

While writing the script, I shed tears of regret. My basic routine was to eat at a small restaurant in a hotel, then return to my room and drink a little. A voice came from behind me, “I’m not working, so please relax.” It was Producer Nishizaki. I immediately felt better!

3. Yamato is loneliness, romance, courage, decision, and endurance. I yearn for its untamed nature, the symbol of my life. A wild side does not just mean roughness.

1. Screenplay (from the second draft to the final draft)

2. I died of “mecha stupidity.” I was like a junior high student sent back to study space science. While writing the third draft, I got an average of two hours of sleep per day over a five-day spurt. I beat the record of Napoleon!

I admired the skill and tenacity of Producer Nishizaki, and I marveled at his mixture of roughness and sensitivity.

3. Close Encounters of the Third Kind. 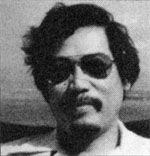 1. Technical Director. To be more specific, the mechanic and effects director. It is like working on special effects for a monster movie.

2. A confession: this time I helped the mecha drawing supervisor a little and drew Yamato properly for the first time. In fact, I have never drawn it directly until now.

1. Setting [design] artist. (Inside and outside Yamato and the advanced warship [Andromeda])

2. Setting design work began while the script was being written and progressed day after day with meetings until midnight. While I was worrying over the details of scenery on Teresa’s planet as per Producer Nishizaki’s demands, I noticed a cracked rice cake in the mirror and got a hint from that.

3. The work of setting artists rose to the level of dramaturgy in anime. [The art and technique of dramatic presentation.]

2. My thumb dried out while looking for scenes because the storyboard was so thick.

3. “You cannot talk about Japan without Yamato.” I dreamt that the spirit of the old IJN Yamato crew said this to Mr. Nishizaki while holding a cashbox. It was during a catnap at dawn after an all-nighter! 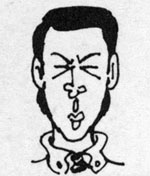 2. I regret causing inconvenience by falling behind schedule.

3. I was engaged on Yamato from the first TV episode, and it was serious work. There were many troubles and worries, but I managed to carry it out for long years.

2. It is a rare thing when those who work on a drama also shed tears for it.

3. It’s unusual for a Space SF project to have a feeling of familiar romance.

2. Sometimes I fail because I get careless. On Yamato I shot a NG [No Good] frame 1300 in a 1500 frame scene by putting down a gloss acetate instead of a flat one.

I had trouble every day with garbage and dust getting on the dark backgrounds and it became stomach-churning.

There were a lot of backlit scenes and other special effects this time, so my shots required way too much homework. It was both enjoyable and frightening.

3. On the production side, it takes patience and endurance because it is always a rush. In terms of content on the work side? It is sublimely peaceful plus the love of space. 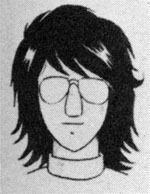 2. Because the work of character animation is very confusing, I had a difficult time though the characters were drawn more accurately.

3. I think it will be a memorable work.

2. The production of Yamato itself is an “impression” for me.

3. I feel that language is extremely limited to describe the unique sense of nostalgia I feel for Yamato. Why is it that Yamato dashes out into space with no sense of incongruity at all? Such an observation can be used as a guideline for a member of a society that would live there. 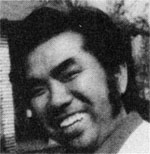 3. It was a work that excited a creative person’s spirit of romantic adventure, and it became one of the most unforgettable for me. 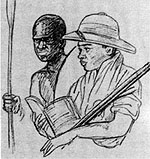 2. “I think everyone watched the first Yamato, but that’s not the kind of job we do. We wouldn’t work with such a dirty FAX. Doesn’t our FAX look beautiful?”

Why did I explain it to visitors that way? It was appealing. Extraordinary research and passion for the anime world made FAX technology number one. It is the nature of a Xerox machine to require a constant temperature for reduction and enlargement, so we had to keep it cold in the summer.

[Translator’s note: FAX in this case was the term for a tracing machine that would turn a pencil drawing into ink on a cel. It was great for saving time in hectic TV production, but not always great at producing a clean transfer until the technology improved.]

3. I know there was an Anime fan magazine with a “Yamato Special” three years ago, and having heard of the interest I paid attention. It was a bridge to the heart of anime fans.

[Translator’s note: For the sake of accuracy, three years prior to this comment would have been 1975, but the first magazine with a Yamato cover story was a 1976 issue of Fantoche. He is probably misremembering the date, or confusing it with the famous 1977 issue of OUT.]

2. Every day was an explosion. We did not know if the many different battleships were friend or foe, and we made a lot of mistakes because it was very difficult.

3. It is a lovely feeling for someone to remain in the heart and never disappear.