Back up to Report 3

Yamato Fever breaks out again! That term was first coined in 1978 in the run-up to the premiere of Farewell to Yamato. It resurfaced in 1980 for Be Forever, in 2009 for Yamato Resurrection, and it applies again as these words are being written. The rubber hit the road in October and November as the clock ticked away toward the December 1 release of the live-action Space Battleship Yamato movie. Here’s a roundup of that hectic timeframe…

Love Lives, the end title song for the movie by Steven Tyler, was first heard in full on October 4 when it was cleared for airplay on Japanese radio. This is the limited-edition promotional CD, which contained the same four tracks as the commercial version released at the end of November (shown farther below). Hear a broadcast of the song via YouTube here. 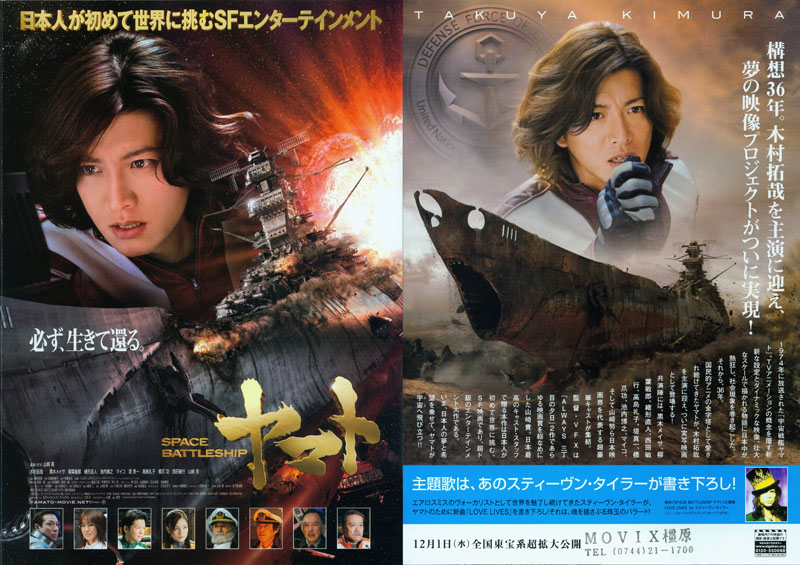 A two-sided flyer popped up in movie theatres on October 6 (the anniversary of the first TV series) with some new photos, basic text describing the premise of the film, and the first trickle of information about the story. 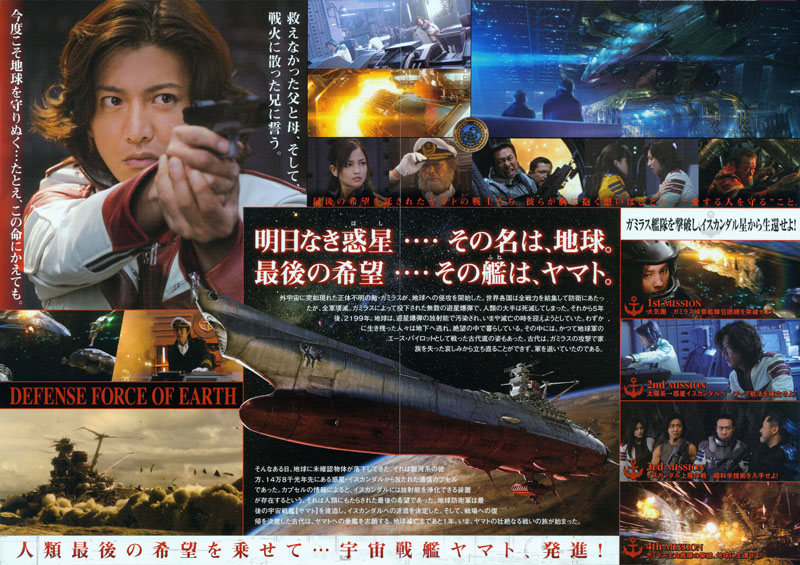 According to this flyer the story is broken down into four “Missions” (bottom right), which add up to a simplified/reimagined version of Series 1: battle at Mars (instead of Pluto), voyage to Iscandar, battle on Iscandar (not Gamilas), and showdown with Gamilas near Earth. 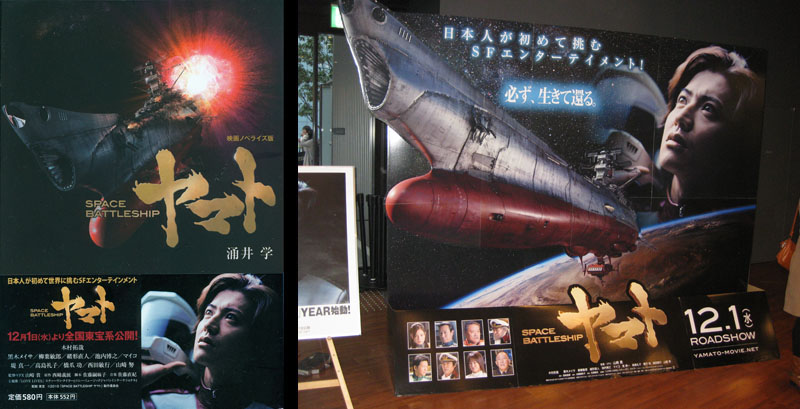 Yamato‘s anniversary was also marked by the arrival of a promotional standee in movie theaters and a novelization in bookstores. The novel was described in our last report, and a partial translation of it accompanies our synopsis of the movie. Read it here if you DARE!

October 21 was the publication date for yet another promo item, a large-format press folder in limited quantities with slicker production quality. Measuring about 14″ x 40″ when fully open, it delivered our first clear look at the emblems in the film, several new cast photos, and this expanded description of the 4 missions: 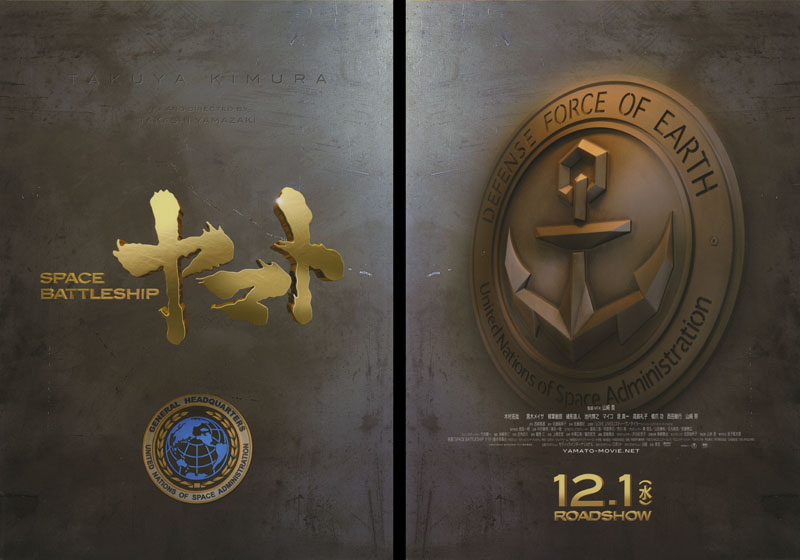 Space Battleship Yamato escaped the surveillance of Gamilas by being built underground in secret. But a warship exceeding 500 meters in length requires a huge amount of energy to fly, and an enormous amount of heat is released from the engine during startup. The energy reaction on Earth’s surface is temporary, but a sharp rise will be detected locally. As Yamato makes its sortie, it will inevitably be spotted by the Gamilas scout fleet watching from orbit. When Yamato appears, its first fight with Gamilas raises the curtain. Can Yamato get through the enemy siege and break out of the atmosphere? 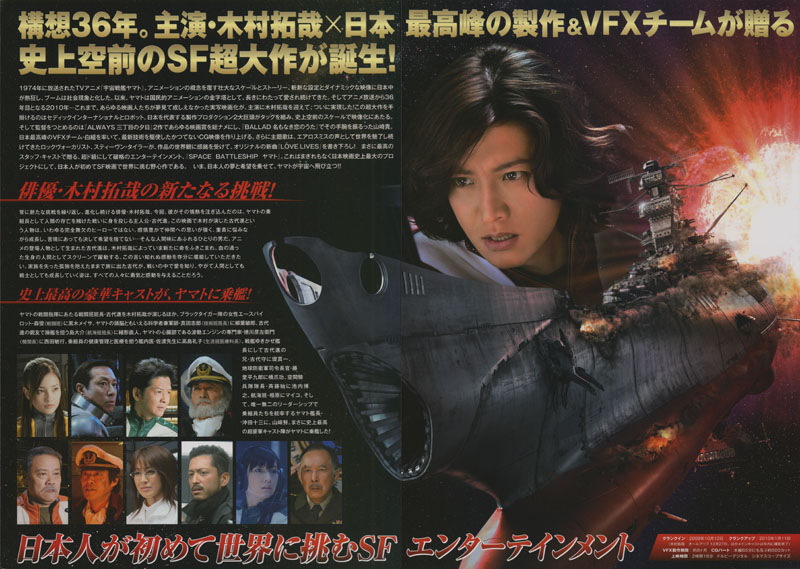 The science and technology of Iscandar far surpasses that of Earth. The super-powered wave engine carried in Yamato is a product of that technology. It is said that Iscandar lies far away, 148,000 light years from the solar system. How can a round trip of this distance be accomplished before life on Earth goes extinct in one year? The answer is “Warp.” The wave engine enables warp navigation, but it is unknown whether a human body can tolerate a warp. 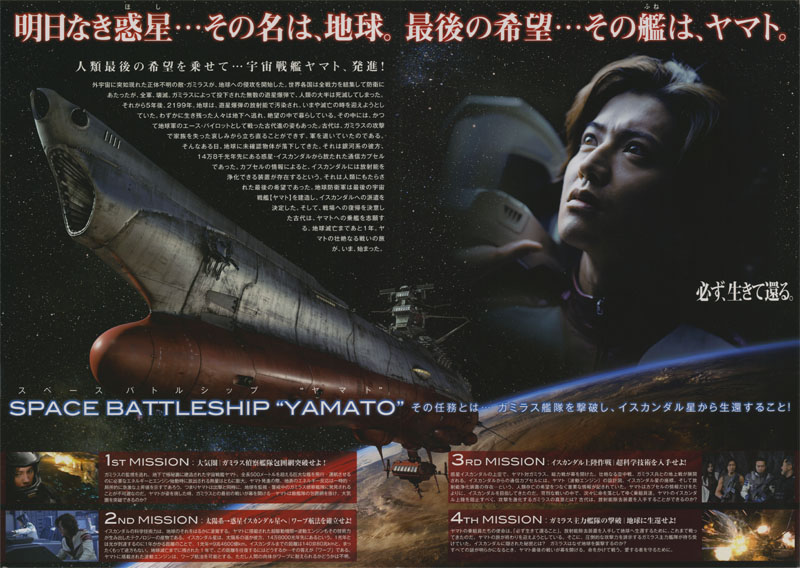 An all-out war between Yamato and Gamilas has raised the curtain in the sky of Planet Iscandar. A fierce aerial dogfight expands into a ground war with Gamilas soldiers. The communication capsule from Iscandar (which contained plans for the wave engine) also gave the planet’s coordinates and the existence of a radiation purifier, important information tied to the fate of the human race. Yamato traveled to Iscandar relying only on this information. The crew dies one after another in a severe battle. What is the motive of Gamilas in intensifying its attack to stop Yamato from landing? Can Kodai obtain the radiation purifier? 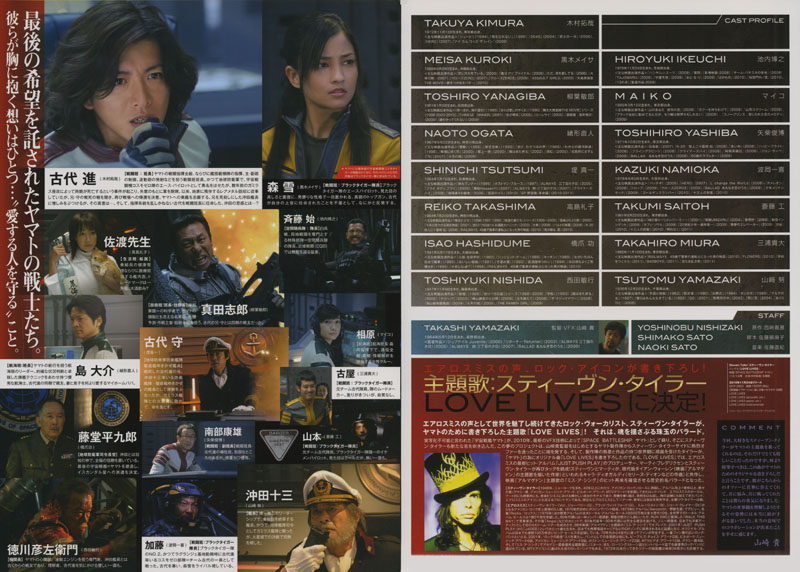 The Yamato crew’s mission is to “live and return without fail.” They left to obtain the radiation purifier and return alive to Earth. The voyage of Yamato is about to reach its end. The Gamilas main fleet is waiting for it, showing its overwhelming offensive capability. What secret was hidden on Iscandar? Why does Gamilas attack Earth? All mysteries will be revealed when Yamato kicks off the final battle. I stake my life on this fight, to protect the ones I love. 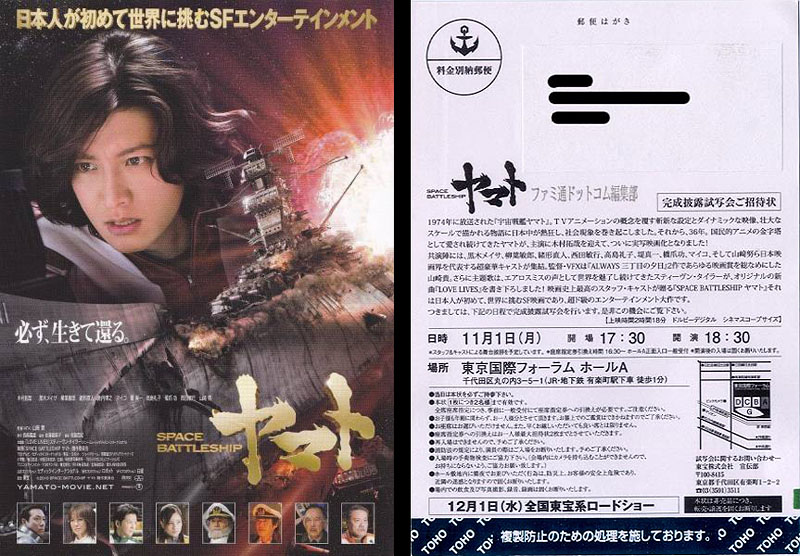 As the last week of October rolled around, online buzz turned to talk of upcoming preview screenings. The first was held on October 24 specifically for parents with elementary-school children who consented to give their comments on camera for a series of day-by-day “countdown” TV commercials (linked farther down the page).

But the bigger announcement was for a November 1 preview with the cast and crew in attendance. Fans could apply online for the limited seating; winners received the postcard shown above which would serve as an admission pass for two. They started turning up in mailboxes on October 23 and several went up for online auction within a day. This is what allowed friend-of-this-website Anton Kholodov to be in the audience. His report is part of Yamatour 2010, linked at the end of this article.

The first food tie-in announcement was made on October 28 when House Foods began shipping three varieties of their “Kukure Curry” with Yamato packaging to Japanese Conbini [Convenience Stores]. (Special thanks to this blogger for posting the photos.)

The first magazines with substantial movie coverage started to appear on October 30. With pop/film megastar Takuya Kimura as the “face” of the film, it was a natural choice for him to get one cover shoot after another–putting Yamato back in the spotlight of mainstream media for the first time since the 1980s.

Kimura interviews were the main feature of each magazine, often coupling him with Director Takashi Yamazaki, along with shorter features on the rest of the cast and retrospectives of the anime. Interestingly, one of these magazines was the bi-weekly KinemaJunpo [Cinema 10-Day Report], which was known in previous decades as Kinejun. It had the distinction of being the first mainstream magazine to feature a Yamato cover story in 1978 (then again in 1980), and this was noted with pride in their new coverage. Shown at far right is the December issue of Big Comic, published by Shogakukan on November 25 with a cartoon Kimura on the cover. 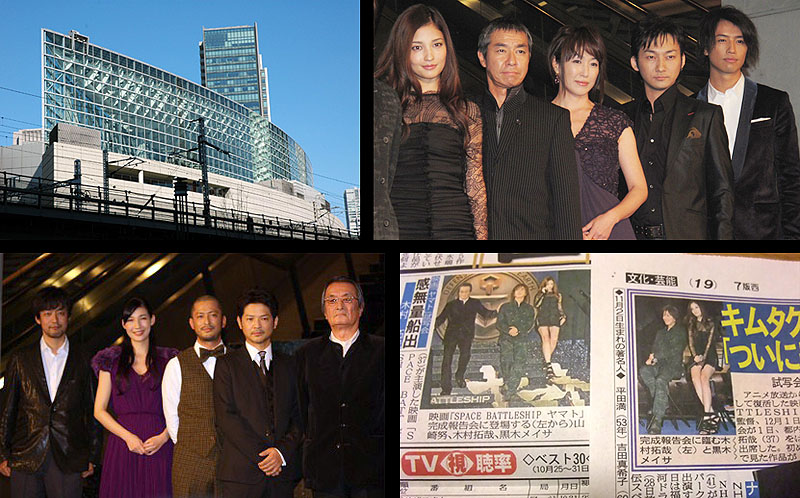 The biggest event in the runup to the premiere was undoubtedly the November 1 preview screening at the Tokyo International Forum in Yurakucho, Tokyo. Tickets had been awarded by online lottery through Toho Studios, and a lucky audience of over 3,800 winners got to watch the film along with the cast and crew. News coverage the next day stated that the film ended to thunderous applause, and a parade of cast members expressed their relief to be met with such enthusiasm. Takuya Kimura said he was doubly relieved to finally see what the director saw, since most of the principle photography had been done with greenscreen.

See online reports with photos of the event: Report 1 | Report 2

As previously mentioned, friend-of-this-website Anton Kholodov was in the audience along with several members of the Yamato Party staff, and filed his report in Yamatour 2010, linked at the end of this article.

Resurrection was the first Yamato film released in the internet age, which enabled all sorts of web tie-ins that were literally unimaginable during the original production years (revisit our Resurrection reports to examine them). The live-action campaign took it to a whole new level on November 1 when the official website launched Yamato Earth, a plug-in for Google Earth that looks at the planet circa 2199.

Fans around the world with either Windows or Mac OS X 10.4+ can sign up to be part of Yamato Earth, which kicked off with two main features: a global view of Yamato fandom and a series of stills from the film positioned at actual vantage points around both Earth and Mars. There is also a time tracker that keeps a recorded history of the membership, and new features are added periodically.

Again, Yamato Earth can be accessed by anyone with Google Earth, Adobe Flash Player, and the correct OS. For those who might be intimidated by the language barrier, Click here for an English-language tutorial that explains the entire signup process and the features.
Get on board now for maximum enjoyment! 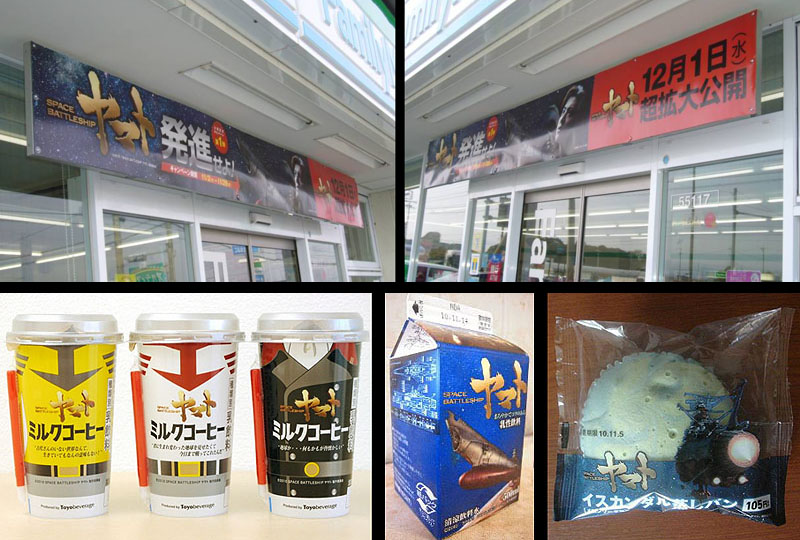 For the second year in a row, Yamato swept convenience stores in Japan. The Sunkus chain carried the banner in 2009, and this year Family Mart [Famima] and AM/PM took charge with a two-tiered promotional campaign in stores across the country. First, three food items came in special Yamato packaging: milk coffee in crew-uniform cups (watch a personal testimonial on YouTube here), a chilled milk drink, and “Iscandar pancakes” meant to look like the surface of a planet.

Those who did buy Asahi beer could scan their coded receipts into their smartphones (or mail them in) and qualify for a separate lottery to win a Kodai dog tag, a pair of watches, a personal organizer, or a set of phone cards. The dog tag was, of course, the top prize–only one would be awarded. (Incidentally, it shows Kodai’s date of birth as October 31, 2166.)

Click here to see a gallery of prizes from this and the followup campaign.

Click here to continue to the second part of this report.