from the novelization by Manabu Wakui
Translated by Tim Eldred
Stills are for illustrative purposes only; most are from the 2010 Pachislo game by Yamasa.

It was the year 2199AD. The beautiful blue Earth had been contaminated by radioactivity and the human race was in danger of extinction.

A man walked the red Earth with dangerous steps. His entire body was wrapped in a protective suit. Sweat floated over the surface of his skin, rolling down his back to collect in a container at his waist. His recirculated air was over 100 degrees, but he could not remove his clothing or he would die.

Everything on the surface of the Earth was saturated with radioactive poison. If one were to take off their mask and breathe outside air, their throat would burn and their lungs would collapse immediately. A tear in one’s protective suit would admit air tinged with poison that would cause the skin to fester and the internal organs to rot in little time. Even being fully covered was not completely safe, since a protective suit on the surface would itself slowly be violated by the powerful radiation.

The man dropped to one knee on the red Earth which spread out to the horizon. He held out both hands, wrapped in thick gloves, and scooped up red sand. He brought the sand close to the goggles over his eyes, as if scooping water from the surface of a river seemingly to moisten his throat.

The red sand spilled and fell from the man’s hands. The soil was dead. Only parched dust with no moisture left. Lit by the scorching sun that killed every organism, the red soil ran with a whisper through the spaces between the man’s fingers and scattered at the toes of his boots. A few grains jumped like fleas.

He cupped his hands like an hourglass, continuing to spill what was left of the sand, watching it with dry eyes. The last grain slid off his fingertip with no resistance and was inhaled by the red Earth, to fade away.

The Earth was dead.

The man recited this like a prayer to Buddha. Nearly five years had passed since the Earth became what it now was. No water was left on the surface, so people fled this hell to seek a place of survival underground. They fought over what little food and water science could generate. Their hearts became hardened and their world turned to grey.

Hell had fallen from the sky.

The man looked up. It was as if the red surface of the Earth, its seas now lost, was reflected above. The red-stained air was thin and the clouds moved slowly through the sky like red amoebas, the color of drying blood. 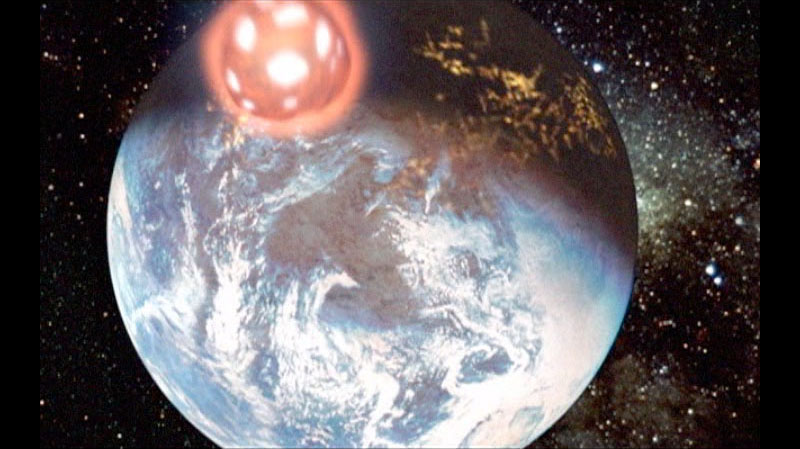 Earth had become this way in only five years, the result of meteorites that had fallen from space without warning. People called them “Planet Bombs.” The first blow fell in the open sea 30km off the African continent near Capetown. It raised the Earth’s crust and caused a tsunami. The people of Earth thought it was a conventional meteorite.

Capetown was evaporated in the space of a moment by an object only tens of meters across. The heat wave of the explosion caused by atmospheric friction was so intense that whatever it touched was vaporized; the steel and concrete of buildings and the flesh and blood of those at the scene. Statistically, such an impact happened only once in several hundred years. The people of Earth lamented it as an unfortunate accident and mourned the death of their brethren, consigning the tragedy to the pages of history books.

But this “meteorite” did not fade into history. Another fell the next day, and yet another three days after that. The second strike exploded in America and the third in Europe. What started as a single tragedy became three, and people could no longer consider it a “natural disaster.”

Perhaps pieces of a huge meteor peeled off near the Earth and rained down on the surface? Or had an errant asteroid from the belt between the orbits of Mars and Jupiter invaded the sphere of Earth for some reason? While various opinions flew and scholars argued, a report of further tragedy came from the first stricken area, Capetown.

“Injury from radiation has spread through the population centering on the meteorite’s impact point.” It was not strange for a meteorite to emit radiation; before coming to Earth, any material continually exposed to space would absorb some small amount of it.

But this meteorite was obviously different. The quantity of radiation it emitted was extraordinary, breaking down the genetic code of every living thing within several kilometers and killing them. And it did not decrease; it persisted indefinitely and killed every person who approached it, without exception.

The first victim was a researcher who began an investigation of the crater made by the meteorite’s impact. Only a few minutes after the survey started, other researchers suffered severe radiation damage, their skin burning and their eyesight lost. They died howling uncontrollably as they slipped into delirium, five of them in the space of an hour.

The doctor who judged these symptoms to be the result of radiation damage ran a small Geiger counter over their dead bodies and was shocked by the numbers, and flung the counter away. Sweat collected on his back and his breathing became labored.

Anyone exposed to that amount would be killed on the spot.

In just a few days, peoples’ consciousness changed. Serious radiation was spreading from the impacts in Europe and North America, just as it had in Africa. Much life had been robbed by the impacts themselves, but the overwhelming majority of deaths followed from the radiation.

The chain did not stop there. Planet Bombs fell to the surface of the Earth at intervals as regular as mail. In every case, the ground burned like hellfire. Clearly these “meteorites” were the work of someone with intent. Everyone on Earth guessed at this conclusion without waiting for an official government announcement.

This attack was coming from beyond the Earth. From space. 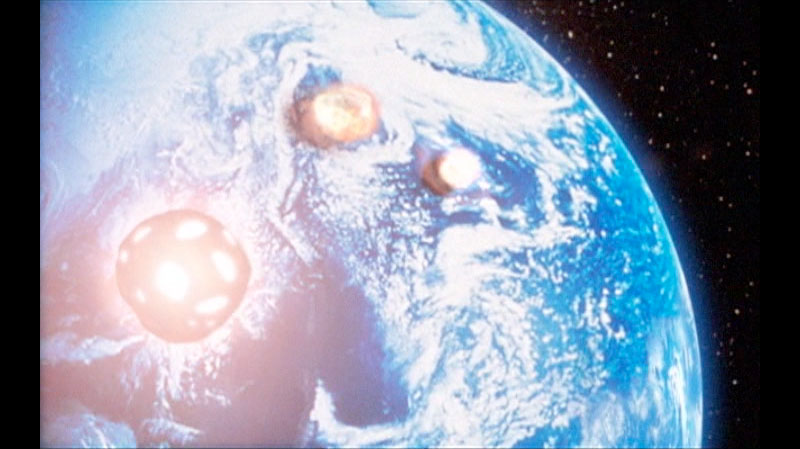 That was five years ago now.

The unidentified enemy suddenly appeared in the vicinity of Mars and sent innumerable Planet Bombs to Earth. When this origin point was recognized, an investigation group left for Mars immediately. But the ship that carried them was completely destroyed before it reached its destination. By analyzing an image caught by the investigation ship just before it was lost, people saw it for the first time.

Life from beyond Earth, an advanced civilization far ahead of our own, was mustering a large fleet near Mars. The survey ship was fired on by this fleet and blown to smithereens in an instant. Nothing was understood. Everything was uncertain.

But there was something named “Gamilas” on the Earthward side of Mars, which had established a base there. That’s where the Planet Bombs were coming from. It was clear now that these “meteorites” were an attack on Earth by an enemy with advanced science using them as depth charges.

“We hereby declare the inauguration of the Earth Defense Force.”

A multinational coalition was formed across all borders, and people were excited by this movement. Facing a global crisis that threatened all of humanity, almost every country joined the Earth Defense Force without hesitation. It was an enormous project that organized teamwork and intelligence into a powerhouse of science and technology once used in competition between nations.

However, the difference in power between Earth and the unknown enemy was obvious. Earth resorted to desperate trial and error measures to somehow check the Planet Bombs. There was no chance of dealing with them directly, so rather than trying to destroy them, it was decided to attempt to change their course. A method was worked out and went into action.

As soon as a Planet Bomb was spotted on radar, a fighter from Earth rushed in to bombard its flanks and prevent a collision with the surface. By this strategy, dozens of impacts were avoided. In the fight with the mysterious alien “Gamilas,” it was one of the few victories for Earth.

But there was no end to the tragedy. 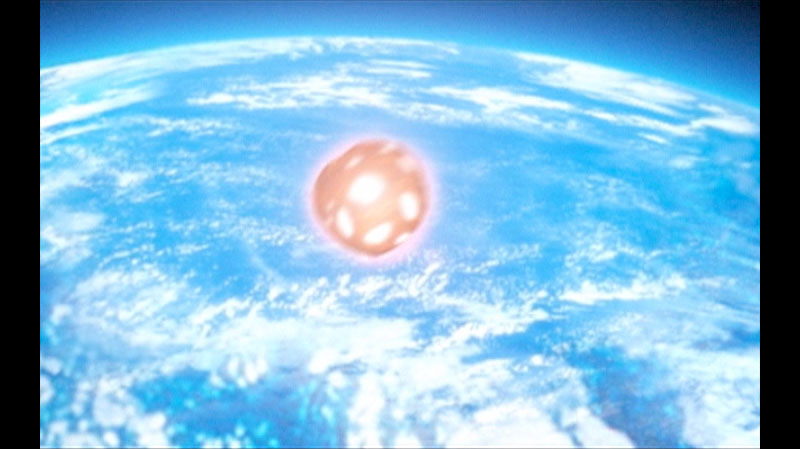 First, the oceans disappeared from Earth because of the Planet Bombs. As the seas went, the rains followed. Rivers withered without rain. Trees and animals died. Severe food and water shortages hit all of humanity without preference. Everyone was beset with hunger, thirst, and despair. No one could foresee an end to the tragedy.

The Planet Bombs’ radioactive contamination turned the surface of Earth into a world of death. People were pushed underground into limited space and they fought endlessly, killing each other over what little food and water was left. Even the diversion strategy employed against the Planet Bombs, the sole hope remaining, gave birth to a new tragedy.

It was a good thing to change the course of a Planet Bomb and prevent it from hitting the surface like a nuclear warhead, but ultimately one was accidentally diverted into a space colony that orbited Earth and many people died. The space colony had begun to seem like the only safe place left to live, and now those chained to the ground had lost even that hope.

Now they were only waiting to die.

No one understood the reason for an incomprehensible alien to come out of nowhere and commit such murder. The Earth Defense Force, which was organized to embody the strength of mankind, was swamped in defeat. The space fleet which had come together with the greatest science on Earth was rendered scrap in every mission and disappeared into space dust.

The spectre of such overwhelming power left those still living under the Earth with nothing but despair. Living with eyes fixed on the future, they only looked forward to tomorrow because it meant they would not have died today. For those barely clinging to life, it was the only motive left. 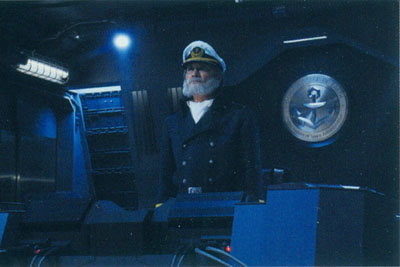 “This is the final battle.”

Captain Okita lead eight large cruisers, eight destroyers, and three spacecraft carriers to meet the challenge of a decisive battle in the vicinity of Mars. All the military power left in the Earth Defense Force was concentrated on this fight, to make every possible effort to smash the Gamilas fleet.

People watched with cold eyes as they listened to the speech of Commander Todo of the EDF. A new warship had been born and was sailing off to spin another new tragedy. It could not possibly win. It was just a waste of life and resources.

People had no choice but to bet on it now, understanding full well that it was all just in their heads. With hope as small as a grain of sand and the conviction that miracles were impossible, the people still entrusted them with their best wishes.