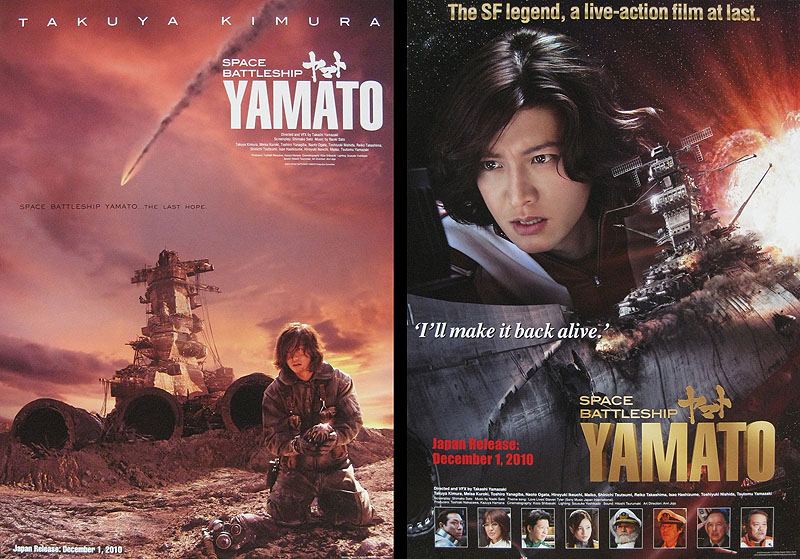 Yep, that’s English! Quite by surprise, the movie’s next preview screening happened not in Japan, but in Santa Monica, California. Sponsor TBS (Tokyo Broadcasting System) participated in the AFM (American Film Market) festival in which foreign movie companies exhibit their works for US distributors. Yamato was screened with full subtitles on the morning of November 6. Read a personal account of the screening in Yamatour 2010, linked at the end of this page.

TBS also distributed an English version of the “Yamato News” flyer that circulated in Japan this summer. Read it here.

When the festival closed on November 9, a TBS official indicated that there was significant interest from US film companies. Fingers crossed.

Additional previews in Japan were held on November 10 in Osaka, November 19 in Fukuoka, and November 25 in Nagoya, all for small audiences of very lucky lottery winners.

It wouldn’t be a social phenom without an iPhone app, and Yamato got one of those on November 12, essentially another route into Yamato Earth with its own crew signup portal. 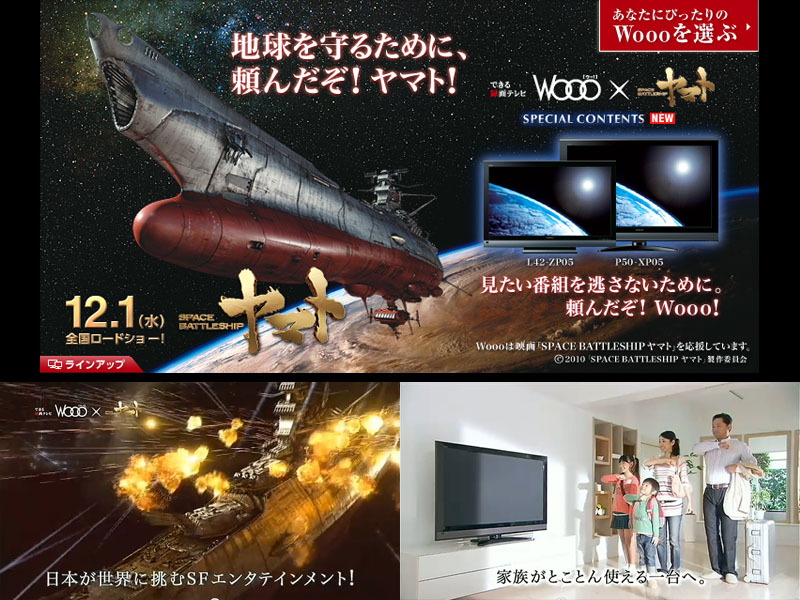 Another sponsorship tie-in began on November 12 when Hitachi rolled out a new commercial for its line of WOOO HD TVs using Yamato as an eyecatcher. A few quick shots of movie footage were shown along with a family throwing the Yamato salute at their shiny new widescreen.

The Hitachi website also sported a Yamato promotion, which included an interview with director Takashi Yamazaki. Visit the site here. 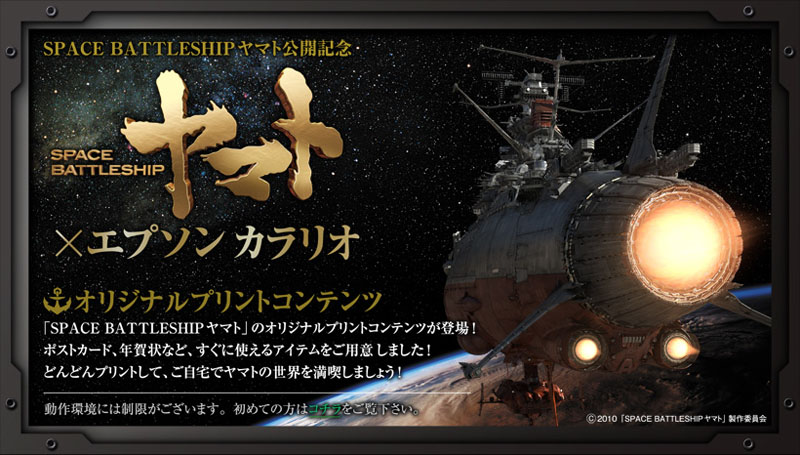 Epson joined the elite ranks of internationally-recognized Yamato licensors on November 17 when it launched a webpage of printable images from the film for use as holiday greeting cards. Regrettably, they are no longer online.

Yamato has always been about the romance of adventure, but on November 18 it also became about the regular Earthbound kind, too. That was the approach taken by “Fanet” (short for “Fashion net”), an entertainment website from publishing giant Shogakukan. Their Yamato “Love Laboratory” purported to advise you, through a series of 6 questions, of your personality type in comparison with one of five Yamato crewmembers. You might be curious to know why Kodai wasn’t included as one of the five types; this is because actor Takuya Kimura’s agency, Johnny’s Office, charges notoriously high fees for the use of his image. Ironically, that prevented the star of the movie from being seen in secondary promotions like this one.

The traveling prop exhibition, which kicked off at Sanrio Puroland back August, arrived at its next stop November 20 at the TBS (Tokyo Broadcasting System) headquarters in Akasaka, Tokyo. As a primary sponsor of the film, TBS upped the stakes by adding a giant 15-meter Yamato model built from CG data supplied by the production unit. As with the previous two mega-models seen earlier in the year (at Yamato Expo in February and the World Hobby Fair in June), its Wave-Motion Gun could light up and fire, this time igniting a laser lightshow. Read an eyewitness account of the exhibit in Yamatour 2010, linked at the end of this page.

See a photo gallery of the Sanrio prop exhibit here.
See TBS exhibit photos here: Blog 1 | Blog 2 (with stills from an on-site video for tour stops in Kyoto, Fukuoka, Nagoya.)
Special thanks to August Ragone for this find.

Yet another website jumped onto the Yamato bandwagon November 20: “Terebi (TV) Dogatch,” a destination for entertainment news focusing on film and television. Their Yamato page features interviews with a few of the actors which are unfortunately viewable only in Japan, but there’s a nice bonus for everyone else.

Scroll down to the bottom of the page and click the “CHECK” button under the “CG Photography” graphic. There you will find a set of special effects shots with some interesting surprises inside. Visit the site here. 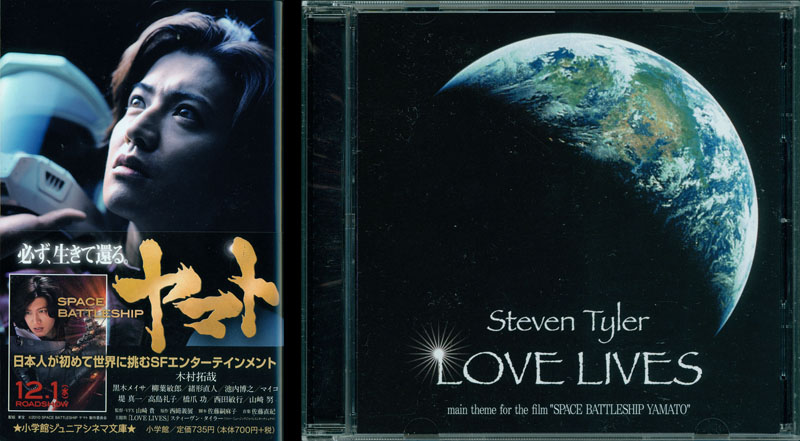 On November 24, just one week before the premiere, two new products sounded the starting gun for merchandising. Shogakukan published a 200-page Yamato novelization in their “Junior Cinema Library” (with a few pages of color stills and completely different text from the first novel). Also, Steven Tyler’s CD single for the end title track, Love Lives, was released by Sony Music Japan. It contains four different versions of the song: Single mix, Acoustic Version, Piano Version, and Instrumental. It marks Mr. Tyler’s first solo release and also the first contribution to a Yamato film by an internationally-recognized music star. 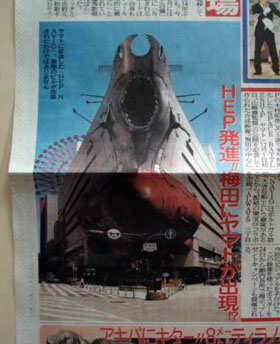 Another prize lottery campaign got underway that same day in the Umeda district of Osaka, centering on the Hep Navio shopping mall (above right). No, the mall wasn’t rebuilt into a life-size Yamato prow, though of course that would top everything else on this page. Instead, that image was created for a week-long “scavenger hunt” in which participants could look for clues and code words at three area malls and enter them online to win special prizes. A secondary campaign gave players the chance to attend a screening of the movie on December 12 with special guest Takuya Kimura.

Click here to see an enlargement of the promo image.

Dive Toy Warehouse’s Yamato crew jerseys, which were announced in September, went on sale November 25. They had already proven to be a hot item for online vendors, selling out well in advance of this date.

Thus, winners of the ticket lottery for the preview screening in Nagoya that same day could be the first in the world to see the film “in uniform” if they had ordered their jersey early enough.

The last of the Tokyo preview screenings was held November 26 at the main office of Toho in the Yurakucho district. It was attended by two Yamato crewmembers, Takumi Saito (Black Tiger pilot Yamamoto) and…Analyzer! These photos were taken after a private lecture at Toho where Saito gave his impressions of the film, which he likened to “watching a Hollywood movie.” Analyzer’s comments were not reported.

Special thanks to superfan August Ragone for contributing this info. Visit his blog here.

One more big hurrah before the premiere was held on November 28: a live “Countdown Event” at the TBS exhibition in Akasaka. Three heavy hitters took the stage to address the crowd: Director Takashi Yamazaki, singer Isao Sasaki, and…Analyzer! Sasaki only spoke one line of narration for the movie, but wherever he goes the classic Yamato theme follows, so he naturally performed it for the appreciative crowd. The event was promoted at the movie’s official website with ticket availability for only 500 people drawn at random. The next personal appearance would be by Yamazaki and the actors at a Ginza theater on the afternoon of December 1, with seating for lottery winners only.

Read an eyewitness report in Yamatour 2010, linked below.

This jersey turned up in an online auction in late November, its style and fabric slightly different from the one offered by Dive Toy Co. It was, in fact, a custom uniform issued to event staff (at the prop exhibit) and theater employees. The term “Roadshow,” incidentally, is simply the Japanese term for “general release.”

And that’s not all! Click here for Yamatour 2010, our eyewitness report of the runup to the premiere.