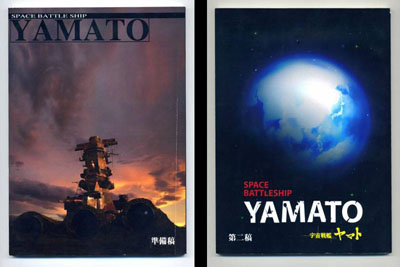 The secondary collector’s market unofficially opened
in December when these early drafts of the movie
script surfaced in online auctions. At exhorbitant
collector’s prices, of course.

Products and events related to the Yamato movie dropped a bit after its premiere on December 1, 2010, but there is still no shortage of news to report, particularly in the realm of box office returns.

According to Anime News Network, the film debuted at #1 in its first week, then dropped to #2 in its second week on Kogyo Tsushinsha’s box office chart, while Harry Potter and the Deathly Hallows Part I returned to the top spot. However, Yamato stayed at #1 on Box Office Mojo’s chart.

In its third week, the film dropped from #2 to #3 on Kogyo Tsushinsha’s chart. On Box Office Mojo’s chart, it dropped from #1 to #4 and brought its total to a little over $27 million.

It its fourth week, it dropped from #3 to #4 on Kogyo Tsushinsha’s chart. On Box Office Mojo’s chart, it stayed at #4 and brought its total to about $32 million.

Then, contrary to expectations, Yamato rose from #4 to #3 on both charts on its fifth week, bringing its total gross to $38.7 million.

In week 6, the film dipped back from #3 to #4 on Kogyo Tsushinsha’s box office chart, but stayed at #3 on Box Office Mojo’s chart and brought its total gross to $44.2 million.

In week 7, it dropped from #4 to #6 on Kogyo Tsushinsha’s chart, but dropped to #8 on Box Office Mojo’s chart and brought its total gross to $46.6 million.

From the beginning, Yamato was touted as the most expensive Japanese movie ever made, but Japanese movies aren’t made with union labor and marketing a film to Japan is far less expensive than in America, so the costs are much easier to cover. Since the production budget for the film was originally announced at about $22 million, Yamato‘s costs were already recovered in its second week even without initial sales to foreign markets.

There is no news yet of a US release, but it’s definitely in the cards for the future. Meanwhile, let’s back up to just before the premiere and pick up the news feed…

CG World + Digital Video, a specialty magazine published by Works Corporation for special effects buffs, became one of the few magazine tie-ins that didn’t put an actor on the cover. This issue (#149) was released on November 29 and contained a full-color 12-page article that examined the entire VFX process used by Director Takashi Yamazaki and Shirogumi [White Group] to make the film. As of this writing, it is the only publication to do so.

Also on November 29, a TV special joined a growing lineup to give Yamato additional broadcast coverage: SMAP X SMAP, a variety show featuring the mega-popular pop group that includes Takuya Kimura [Kodai]. In between other bits, Kimura was joined by his fellow Yamato cast members to watch scenes, play with props, and generally crack each other up. All seemed completely floored by an unannounced walk-on of Isao Sasaki, who sang the theme along with a doppelganger.

See an excerpt from the special here.

Famima convenience stores launched the second part of their Yamato prize campaign on November 30, immediately after the first part ended. The prizes were fewer this time, but much more high-end. Again, customers would get special codes on their receipts which could be entered into a lottery via smart phones. The lucky winners could get a Hitachi Wooo HDTV, a customized HP laptop computer, a customized Nikon digital camera, or a set of customized phone cards. The campaign ended December 20.

Click here to see a gallery of prizes from both of Famima’s campaigns.

The official movie website added a new feature on November 30, the night before the premiere: a Yamato crew blog, regular entries by the cast and crew documenting their activities in the first weeks of promotion. One nice thing about an ensemble film like this is there are plenty of people to carry the load, and they were kept quite busy with theater appearances and TV interviews. Direct communication between the Yamato production office and the fans has been an established tradition for decades, and this is just one example of its persistence today.

December 1! The big day! The 138-minute epic finally opened in cinemas all over Japan (28 theaters in Greater Tokyo alone). The premiere was accompanied by a number of product releases including the soundtrack album by Naoki Sato. The music samples heavily from Hiroshi Miyagawa’s original score, and the track listing reads as follows:

See it from cover to cover here. Spoiler warning: story points are revealed! 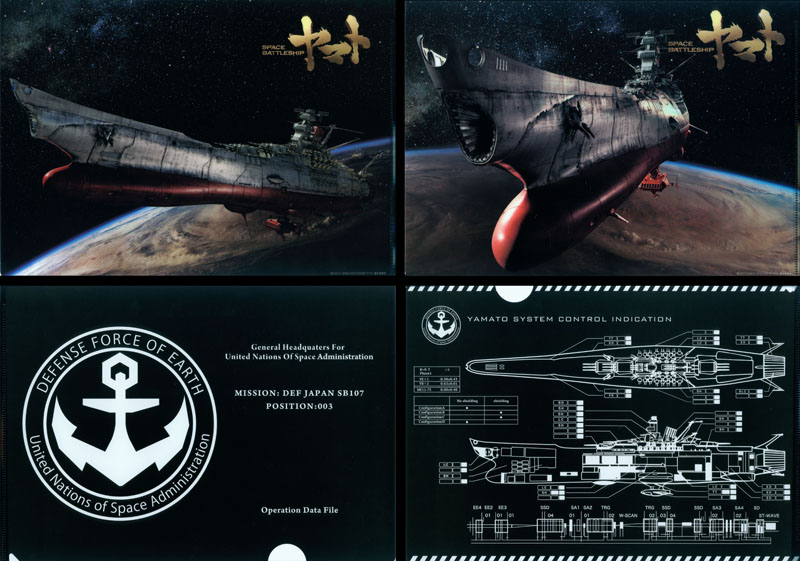 Two A4-size clear files were available, notable less for their function than the art they sported, the largest and clearest views for these particular images.

A B5-size pencil board was another new product, along with an uncommonly large (4′ X 5′) polyester wall tapestry. This item was only available online at the substantial price of about $200 US.

Other items from TBS were a pin-badge set and a handsome 2″ diameter metal pocket watch. Shown above right is a cardboard hand fan, given out at Toho’s Nichigeki theater in Ginza for a special screening hosted by the director and cast on the afternoon of December 1.

Toho Cinemas also has their own in-house magazine, titled simply T, which is sold exclusively at theaters. Published by Kadokawa Media House, the year-end issue arrived on December 1 with a cover story and photo feature on Takuya Kimura. Other Yamato cast members were also interviewed.

Another December 1 magazine was one easily recognized even without knowledge of Japanese: TV Guide published its first Yamato cover story since 1981, a 4-page article that helped viewers to track the numerous TV specials and appearances of the cast through December 10.

House Foods, who previously brought out Yamato curry and snack chips launched a new lottery campaign on December 1 called “A Dream is a Feast.” Participants could apply to win “Space Curry” (which might pair well with “Space Java”), a digital clock, or the grandest and rarest prize of them all: a genuine, one-of-a-kind Kodai jacket made for actor Takuya Kimura. If the winner of Famima’s one-of-a-kind Kodai dogtag scores this prize too, we should instantly declare them ruler of the universe. That would be a fair trade for enduring a lifetime parade of Jeff Spicolis asking, “where’d you get that jacket?”

The last of the movie tie-in food items popped up in convenience stores on December 1, the aptly-named Yamato Big Kokutou Pan [Brown Sugar Bread]. Big it was, indeed: the bag was a foot long with its own custom display panels.

Just about everything has been turned into a Yamato tie-in product…why not chairs, too? Actually, this was somewhat of a reversal. On December 13, the Ergohuman Company put a spin on one of their chair designs, pointing out that it had been used on the set of the film. It only appeared in the Earthbound EDF command center, but whatever the connection, it’s still a Yamato chair.

As it happens, the chairs weren’t the only real-world objects used in the film. The anti-flash goggles and tactical gloves worn by the actors were manufactured by Wiley X, a company specializing in high-impact eyewear for military, law-enforcement, and sportsmen. What’s more, they can be purchased online so Yamato crew cosplay just got easier! See the goggles here and the gloves here.

Hello Kitty made her Yamato comeback on December 16 when TBS and Sanrio reunited in a followup of the summer campaign. This time she appeared in her “Yamato Battlesuit” on a pair of pendants and handheld mirrors. One of the mirrors expanded her role to an entire imaginary Kitty crew. (But no sign of Mi-kun.)

The overall campaign for the film entered its last phase on December 18 when a Yamato event opened at Tokyo Tower Foot Town (a shopping mall at the base of the famous structure) that brought back elements of the TBS prop exhibit from a two-week stint in other cities. Read an eyewitness account of the display here. There it remained until January 5 when everything was returned to home base until the next call for movie promotion or the year 2199, whichever comes first.

With Christmas around the corner, Yamato popped up again at the “Tenjin Fantasy of Light” holiday display in the city of Fukuoka. This wire structure was modeled on the large bow model that toured several cities in the summertime promotional campaign. (See our previous reports for photos of that one.) 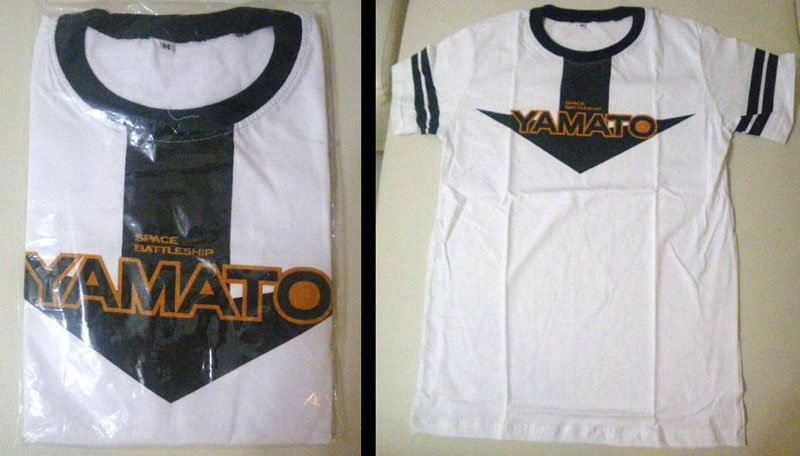 The first sign of international merchandising appeared in mid-January when this t-shirt was released to promote the movie in Thailand. Potentially the first step toward world domination.