Despite how it looks in the Star Blazers/Yamato universe, it isn’t often that you get to meet a space goddess. Imagine, then, how rare it is to find two in one body. That’s a claim that can only be made by two women on Earth.

in Japan, Miyuki Ueda voiced Teresa in 1978’s Farewell to Yamato (a different actress got the role in Yamato 2) and in 2010 she was cast as the “Voice of Iscandar” in the live action Yamato movie–better known to us as Starsha.

But for the lovely Ms. Lydia Leeds, no qualifiers are needed: she portrayed both Queen Starsha and Trelaina of Telezart in Star Blazers. The story of how we found her after all this time is itself a testament to connected roles: she was referred to us by Frank [Dr. Sane] Pita, who had been previously referred to us by Michael [Homer] Bertolini. As it turns out, both knew Ms. Leeds from their college days and in fact it was thanks to her that they landed their own parts in Star Blazers. It’s kind’a nice having a goddess on your side.

This interview with Lydia was conducted via email in September 2012, and it is with great pleasure that we welcome her back to the fold. 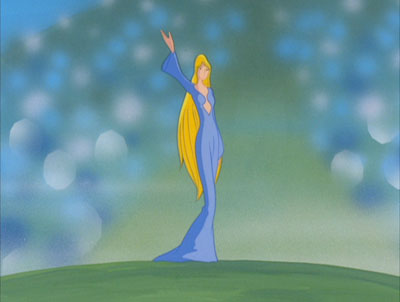 It’s in my genes. My grandmother was a program director for WOR radio in Philadelphia and my mother was a director/producer in radio and later “short form” television, otherwise known as TV commercials. So there were always actors, writers, directors, designers around all the time at home and my mothers’ best friend Jan Minor was one of the most fantastic actors I’d ever seen. So I would say she ignited my interest.

I always had a penchant for radio. Amos and Andy was one of my all-time favorites. I loved how radio freed me to totally envelope a character. I remember doing a “physical acting” exercise in college that was a radio show, and when I got on stage I felt compelled to do the monologue from backstage. If it was supposed to be only heard, then that’s what I would do–let the audience feel through the emotion of the words themselves. Then that was it–I was hooked. I LOVED the form and still do. I believe physical acting and voice acting are umbilically tied.

What sort of professional experience did you have before Star Blazers?

I was making my living as a young actor in New York City, working on every thing I could. I did Off-Broadway, Off-off-Broadway, a couple of appearances on a soap, commercials, voiceovers, industrials, readings, etc. 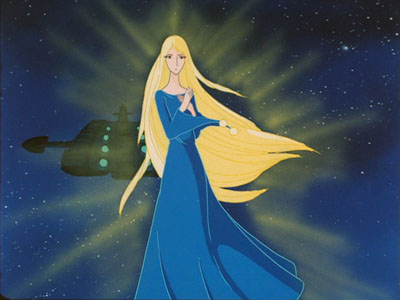 Science-fiction intrigued me. My sister and I were big fans of Dark Shadows, The Fly, Fahrenheit 451…what we called “real skin” vs. animation.

How did you hear about the series and get an audition?

It was really the opposite. I got an audition and then learned about the series.

Some of the other actors found out about the auditions through their acting school. Was that the case with you, or did you have a different entry point?

I was brought in by Kit Carter, the casting director.

I auditioned for the role of Starsha only. I was given sides and a storyline and asked to read. It wasn’t until I was cast as Starsha that I was asked to also play Trelaina.

What does the term “sides” mean in this context?

In this instance, it refers to a portion of the script, like an individual scene. Each actor had only the material that pertained to their character rather than the entire script. 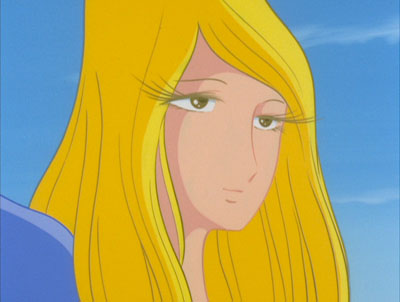 Did the offer to do Trelaina come up early in the process, or did you get through the Starsha scenes first?

I was fortunate enough to be offered the role of Trelaina at my second recording session.

Starsha’s voice seems quite “normal” compared to Trelaina’s. Is she close to your everyday speaking voice, or is she effected in some way?

Starsha is close to my natural speaking voice, although I did use a “breathless” kind of approach.

Trelaina’s voice is so different from Starsha’s, most viewers had no idea both parts were performed by one actor. How did you find the voice of Trelaina?

I recorded Trelaina in a higher register to differentiate her sound from Starsha’s. I also changed the cadence or rhythm of Trelaina’s speech pattern. In addition, her voice was altered electronically in the studio.

With such a high register, was it difficult to achieve clarity with Trelaina’s lines?

It was difficult, and sometimes it hurt! I strained my voice a little to get it that high.

Trelaina and Starsha are arguably the most important characters in the saga. How did you approach roles like those?

I tried to approach them both as realistically as I would any character. For Starsha it was a love story. For Trelaina it was about her fight. 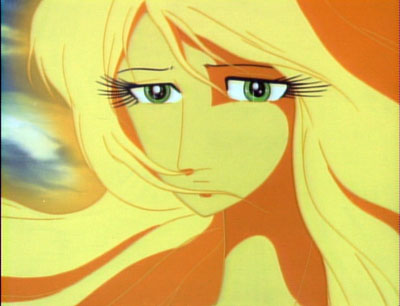 What I recall most was how little information we received about any part of it. It all seemed a little under wraps at the time, as though no one knew if it would even air in the states.

Completely. Always alone and in a recording booth so small that Superman wouldn’t have been able to suit up. Oh, and always at night.

Was it common practice in a voice-acting gig at the time to work “after hours”? Were studio hours cheaper then?

It was very common to work after hours. Not only could you get “off-peak” rates, but sometimes the session could be piggy-backed onto another, making it more convenient for the production team.

Who did you take direction from when you were in the studio? We know the name Tom Griffin (of Griffin-Bacal Advertising) as the head writer of the scripts. Was he the voice director as well?

He was there, but his producer, a woman, was really the director.

Two other names we know from the credits are Producers Ellen S. Leinoff and Theodore Page. Did you have any contact with them? 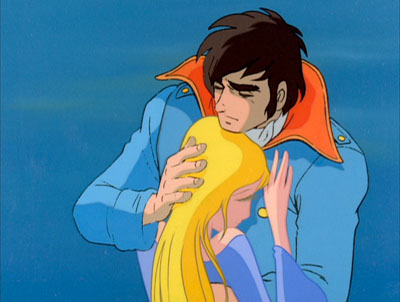 Ah, thank you for that memory jog. It was Ellen who was the producer. And she was very involved.

The sessions were fantastic and more challenging than anything I’d ever done before. It was mind blowing. I’d walk in ten or fifteen minutes before my call time, get handed the sides that were going to be recorded that evening, and wait for them to finish up with whoever was in the booth recording before me. I’d BRIEFLY review the sides (which couldn’t be released ahead of time because it was currently on air in Japan) then walk into the booth and record! Basically, reading cold while watching the video monitor which had the animation on it and lip synching to animated lips that were speaking Japanese!!! Did I say this was more or less COLD reading? It was crazy and it was terrific.

How flexible was the script you worked from? Were you able to improv or rewrite on the spot for a better fit?

There was no time for improvisation, and there were too many variables since we had to synch to animation that had already been created.

Did you get to know any of the other actors?

Not really, since we all worked in our own bubbles as it were, but I was really, truly in love with Derek Wildstar. I did know Frank Pita and Michael Bertolini. We were good friends from college, which is why I recommended them both to Kit Carter, the casting director, so we could work together. 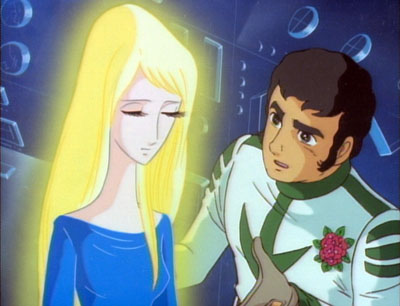 Trelaina’s romance with Mark Venture is a major highlight of the saga, which Tom Tweedy (Venture’s voice actor) still remembers fondly. Assuming you weren’t able to work directly with Tom, what sort of challenge was it to perform such scenes alone? Did you at least have his recorded lines to respond to?

It’s always a challenge to do a scene with no one, but Tom’s work was fantastic, so I was able to really play the scene with him (albeit his recorded voice), and having the animation play during the recording helped me voice the physical moments. Like a sob or a laugh when the animated lips weren’t moving, or the character’s back was to the camera.

How long did it take to do all your work for the series?

It was very fast. A month, maybe.

You mentioned that the series was still airing in Japan at the time you recorded. The Comet Empire series was on the air until April 1979; do you remember if your work occurred before or after that point?

I don’t remember exactly, but it was very close to that time.

No, I didn’t have that opportunity. 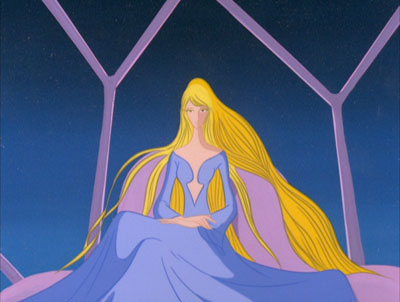 Do you ever revisit Star Blazers these days?

Yes I do. I love what we did and it’s great see what we didn’t have a chance to before. I just got a Trelaina figurine for a birthday present and it brought back a lot of memories.

How did your career progress after Star Blazers?

I continued acting and slowly morphed into directing and producing. I’m writing now as well, and I resurrected my acting two years ago.

What sort of acting do you pursue now?

Being an actor, pretty much anything I can. In addition to my love for voice work, I have a deep passion for Shakespeare, and most recently have played the role of the director of the play-within-the-play in Midsummer Night’s Dream, and the nurse in Romeo and Juliet.

Can Star Blazers fans find you somewhere? Also, what can you tell us about your business, L2K Communications?

Of course! I use Linkedin for all my contacts. L2K is a full-service production company specializing in strategic messaging, and executing that strategy.

Yes! Once! It was at a Madonna concert, her Drowned World tour. In the Kabuki opening, there is an instant of a clip where Starsha is telling Derek he must come to Iscandar at once…and my friends turned to me and said “hey, wasn’t that your voice???” It was pretty funny. They kind’a made fun of me.

It may interest you to know that Queen Starsha is still an inspirational figure in Japan; a university there is developing radiation-scrubbing science to aid in the Fukushima cleanup, and they chose to name it “Project Iscandar.” With that and so many other environmental challenges to deal with, what do you think Starsha’s message would be to Earth today? 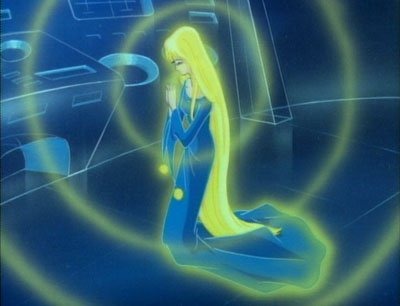 I know Starsha’s message would maintain its original integrity: do what’s right.

You have a time machine that runs on quarters, and you have three quarters.

When all my grandparents were alive because I only knew my maternal grandmother.