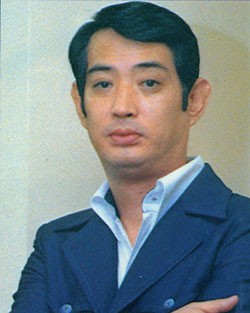 An essay by Yoshinobu Nishizaki

Looking Back on the Past

In the years since 1974, I have put my entire life as a producer into Space Battleship Yamato. These days, I think my whole life was leading up to the creation of this drama.

There were 26 episodes in the first TV Series, then the theatrical version of Space Battleship Yamato was a big hit. The next film, Farewell to Yamato, did even better and lead to the TV Series Yamato 2. The third movie, Be Forever Yamato, will be released this summer.

I’ll be honest. When I produced Farewell to Yamato, I felt from the bottom of my heart that it would be the end. I felt the same about the first theatrical film. I did not think of the future. Because I had a strong sentiment of “farewell,” it came through in the film without reservation. In order to completely explore the theme of a universal love which surpasses love for humanity, the concluding scene of the movie was inevitable.

Love means to dedicate oneself to others. As a consequence, Yamato, as the symbol of universal love, had to disappear into the cosmos. You must wonder, then, why Yamato 2 was produced and we are about to begin the production of a new, third story.

When we made Farewell, there was a disagreement between Mr. Leiji Matsumoto and myself over the ending. He had a different ending in mind, with the theme that “young people must survive,” which differed from the original theme of Space Battleship Yamato. He felt so strongly about this that we created Yamato 2 as an alternative to Farewell.

I do not have a taste for killing young heroes. However, I could not imagine a fate other than death in such an extreme adventure. Structurally, a film is like a short story, so it is important to concentrate on one theme at a time. On the other hand, a variety of themes are possible in a TV series. As long as the primary theme of love (as a dedication to others) is consistent, the fate of the hero may be immaterial.

Under this compromise, the new series was created separately from the production of the film. I did seriously want Yamato 2 to end the saga. For several personal reasons, I did not want it to continue. 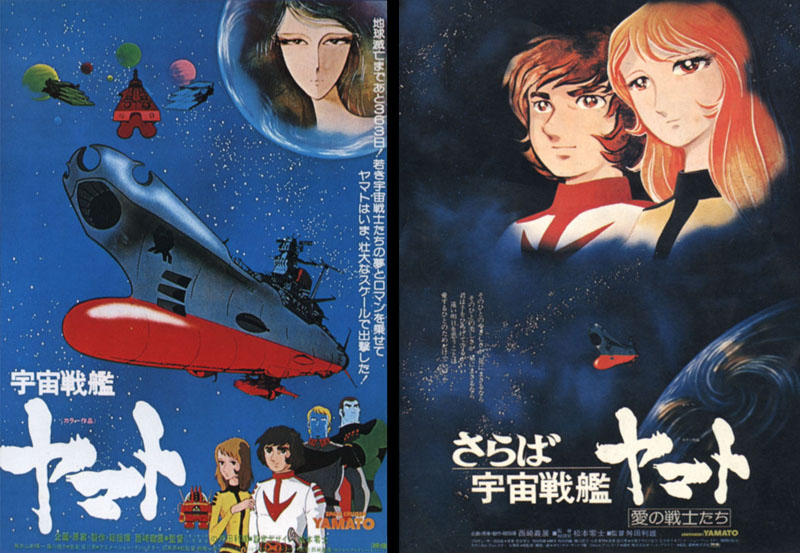 In the first TV series and film, the theme was clearly presented. People feared radiation that would fully cover the Earth, and they feared the unknown enemy that would use such a poison. The story is set in the future and is pure fiction, but considering the social context of those days, anything could happen in the real world, and this sense of uncertainty was captured in the story.

One example was the oil shock that happened to Japan, which had previously enjoyed strong economic development. For children with relatively little life experience, the panic caused by this development had the same impact as a planet bomb.

I think the work was relevant, despite being a space opera, because it spoke to children’s fear of society. Also, I think children sympathized with the young heroes who traveled the overwhelming distance while wrestling with their own fears. As a producer, I attempted to reassure boys and girls that, even in an unpredictable society, a human being lives today for the sake of tomorrow, so let’s live today with all our might. Of course, since it was an animated work, I wanted to make it entertaining as well.

Nonetheless, I felt that this theme was lost in Yamato 2, and it did not reflect my intentions as the producer. Whether the series was successful or not is a separate question, but I continually asked myself whether I should leave it as it was. The answer was quite simple–I would instead return to the original human drama of the first story and make a new Yamato!

Though it seems contradictory, I thought I would not have to be so particular about the fact that Kodai and Yuki died in the second movie. It would be more meaningful to strongly depict how the hero continued to live his life, wouldn’t it? The important thing would be to rediscover the theme of the first series, wouldn’t it?

The direct motivation was the change of generation among our fans. A fan who was 12 years old in 1974 is now 18, and would look back at the first TV series as a classic. So why not create a new, more modern Yamato story for those who were 8 or 9 years old when the original program ignited the Yamato boom? In fact, with the broadcast of Yamato 2 as a turning point, a strong request emerged from this so-called second generation of Yamato fans for us to create a third story. 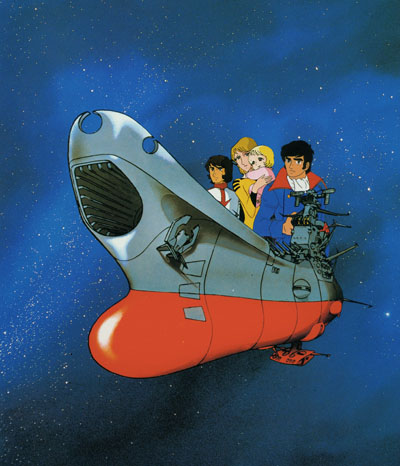 For me, who lived with regrets about Yamato 2, this request was quite moving. For the second Yamato generation, it wasn’t a big concern if the hero died in the movie or not. What matters more is what happens next. Chronologically, however, it was a big problem to reconcile Farewell with Yamato 2. Unless we unified them somehow, it would definitely cause confusion no matter what we did in a third story.

How and where to unify the first and second Yamato generations? My solution, based on the concepts that Kodai and Yuki survived and the relationship between Gamilas and Iscandar was resolved, was to produce a third feature film. But it might seem abrupt to begin production on such a film with only these assumptions as a basis.

Therefore, after finishing Yamato 2 and before launching into production on a third theatrical film, I planned to produce a new story that would unify the fans. This resulted in the making of a tele-feature called The New Voyage.

The Basis for the Third Story

The New Voyage was an attempt to resolve the previous stories in one stroke, while returning to the theme of the first series. It would set the stage for the third movie. So, while planning the basic story with Mr. Aritsune Toyota, I kept the third film always in mind. The title of the third film, to be released this summer, is Be Forever Yamato. My original concept for it was that Yamato would search for a new planet for humankind as the Earth’s sun was progressing toward a supernova.

I wanted to separate this work from Farewell to Yamato, so instead of focusing on the romance between Kodai and Yuki, I planned to take a step back and reorganize the worldview. For example, it was necessary to resolve the relationship between Iscandar and Gamilas for the first generation of Yamato fans. But this could not be just a “filler” story. If Be Forever Yamato was to be an epilogue, then The New Voyage would have to work as a prologue. I planned to introduce a new gigantic machine and a drama big enough to match. Then the third feature film would be presented as a followup.

It became obvious that we couldn’t do everything I wanted in one film, so Leiji Matsumoto suggested something else: we could save my original concept for another TV series. This excited me as a producer, because I could depict a magnificent story without holding back in any way. We then decided to make this the basis of both Be Forever Yamato and a new series.

Let’s return to The New Voyage. Because of my previous works, I have been regarded as a producer who creates love stories. Personally, I don’t say the word “love” very often, but I cannot avoid this theme in Space Battleship Yamato. There are many scales of love, from the level of humanity to that of universal love, and we can also say that love is a dedication to people.

But there’s more to it than that. There is also the love between a husband and wife, parents and children, and brothers. Also, there is the man who loves only one woman throughout his life. Since The New Voyage was meant to build a bridge to the third movie, the love theme would have to be part of it. This brought into play Dessler’s secret love for Queen Starsha.

We see in the film how it matches his love for his own people, which leads him to fight for their survival. Though he does not speak in words, you can strongly remember how Dessler cries out when Starsha sacrifices herself. This, in fact, is the first time we see Dessler cry.

Incidentally, it is sometimes said that the Yamato series glorifies the idea of self-sacrifice. I think this is a misunderstanding. As I have said before, since this story is a prologue to the third movie, I thought it necessary to eliminate departed characters from the previous stories. I also thought of another “new voyage” in which 17 years have passed, Sasha (the daughter of Starsha) has grown up beautifully, and the children of Kodai and Yuki are also 17…but this became a bit much, so I abandoned the idea out of respect for Yamato‘s co-creator, Mr. Matsumoto. (But wouldn’t such a drama truly live up to the meaning of “New?”)

In conclusion, The New Voyage is based on a story co-created by Matsumoto and Nishizaki, and Be Forever Yamato will be developed as both a film and a TV series. In it, I will suggest that “if Earth is the most beautiful planet in this vast universe, it is because human beings live in trust of one another.” This is the theme I want to express to the children of today. 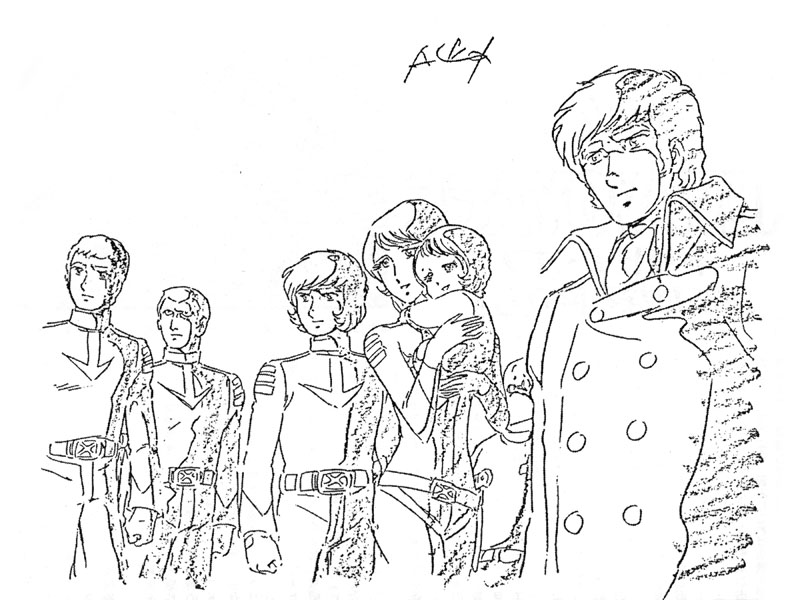 Coda: after Nishizaki wrote this essay in 1980, it was decided that Be Forever should be a self-contained story, and the subsequent TV series would tell the story of Yamato‘s quest for a new Earth. This, of course, became Yamato III, known to Star Blazers fans as The Bolar Wars.

Continue to the next New Voyage article: Story Draft 1 by Hideaki Yamamoto

Continue to our next Nishizaki article: 1980 interview on the making of Be Forever