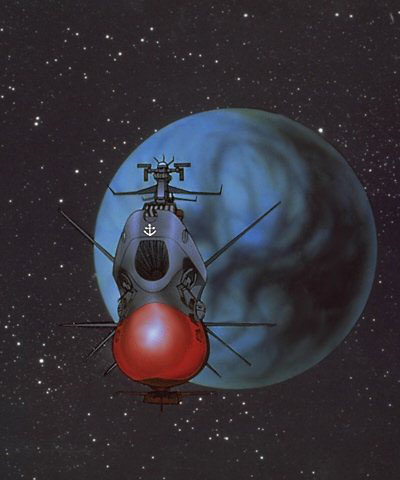 The major difference between Be Forever and previous works in the Yamato saga was its plot development phase. Prior stories had been conceived by a writing staff that coalesced around Executive Producer Yoshinobu Nishizaki and Creative Director Leiji Matsumoto. Thus, rough outlines and design concepts were essentially created by committee. In the case of Be Forever Yamato, Nishizaki and Matsumoto began the process as a duo, which was reflected by a joint authorship credit on the finished film. Their work began in a meeting on October 23, 1979. Presented here are the notes from that meeting.

Since many of the concepts were still vague at this point, they were clarified for better understanding when published in the Be Forever Deluxe Book by Office Academy after the August 1980 release of the film.

-There is a limit to the growth drama of Kodai
-The distance of 148,000 light years across space is now familiar, so the “mystery of space” has faded.
-The mecha has reached the point where it gives the impression of being hand-made and operated by humans.
-In the beginning, the music was based on melodies, and although there are many existing themes it is thought that they have reached a certain limit.

-The premise developed for Yamato Part 3 should be an action/adventure drama for young people, an interesting work able to be enjoyed unconditionally.

-Why is it “Yamato“? It will be necessary to depict why Yamato persists as a starting point for everything. For example, when the descendants of Yamato come into contact with certain situations, there is an excitement that gets the blood pumping and gives the feeling of “fate” that brings the crew together again. “Fate” brings a sense of inevitability to the deed and intertwining the people creates empathy.

-It would be interesting to bring Sanada forward and let him embody the history of Yamato. Because he is a cyborg, he represents progress. He is a human who failed once, but gritted his teeth and survived it. Thus, his philosophy of life could be moving to the viewer.

-Sanada’s views are heard over the image of a damaged Yamato. They are integral with Yamato. For the Earth, for the human race, Yamato wagered itself in the fight for love and life.

-If Sanada’s narrative is profoundly written, it can become a bridge between past and future; the story that arises from the opening prologue is sure to come alive.

-In the minds of young people today, there is a foundation upon which the spirit of obligation and human nature are accepted. I want to give Sanada elements to match such sentiment. For instance, if Sanada approaches death, he says confidently, “this is where Captain Okita is now…I can go there without hesitation.”

–Yamato does not have to start out on Earth. It may be better to heal the wounds of war somewhere in space.

-Pity and tears are evoked when Yamato becomes heavily damaged. We’ll do a powerup (with a roaring sound) and transform it into a dashing new Yamato. There should definitely be a scene of the valiant figure on the horizon.

-Until now, the convention has been that Yamato at first seemed inadequate against a new enemy. In the new story, the figure of Yamato starts out in space and the launch should be grand and dynamic.

–Yamato should also have new devices and equipment. For example, navigation lights.

-It is a problem with the drawings that Yamato gradually appears to become smaller. This was particularly true of The New Voyage. It is important in Yamato Part 3 that it returns to its original size.

The Enemy and Crisis Situation

-In thinking about the enemy side, why do they try to conquer Earth? Why does a huge battle scene develop with Yamato in a fight to the death? It should be amazing when the facts become clear.

-The destination should be mysterious and overflowing with roman[ce]. In a fight to reach this destination, there should be a huge setback.

-We have already surpassed a voyage of 148,000 light years, so it would be impossible to return again to the concept of mysterious SF. What is Yamato‘s purpose in flying off? If we follow the premise of The New Voyage, an invasion of Earth by the Dark Nebula makes the most sense.

-For a concrete method of aggression, for example, an antiproton gun could fire at the sun. As a result, the sun turns into a red giant that will swallow the Earth. There will be a time limit until global destruction with a certain number of days left. Needless to say, this is a crisis that would require much consideration.

Considering a story that would follow The New Voyage, one idea is that 17 years later Sasha would grow up into a beautiful girl. Another idea is that it could be 30-40 years later, in a time after the first generation of Yamato characters. In any event, the characters shouldn’t appear as old since it wouldn’t be suitable in an action film for young people.

This area needs a lot of thought. A clear rationale must be given for any sudden shift. A vague plot would seem unnatural.

-If the main characters in Yamato Part 3 will be the next generation of Yamato‘s crew, their inheritance from the old characters should play a key role. They are connected by “blood” and “fate” such as in Eight Dog Chronicles. [Editor’s note: this refers to an epic novel series about eight Samurai brothers published in the 1800s. Read a Wikipedia entry here.]

-Heroine: the growth of Sasha becomes the pillar this time. Sasha should be depicted as an attractive woman with a depth of mystery and sorrow that reminds us of her mother Starsha.

-Separately from Sasha, we will set up a new heroine. But consideration should be given to the fact that the previous dual heroines Teresa and Yuki were not counterbalanced.

-Sasha’s blood comes from both a human being and a person of space. She could be a kind of superhuman character with a special age or ability/supernatural power.

-The new hero and heroine will be people in whom flows the blood of Kodai and Yuki. Also, a woman descended from Okita, a boy who follows the tradition of Shima (a strange genetic memory), a descendant of Kato (a skilled pilot with a warm heart), a descendant of Dr. Sado, and Analyzer (now a piece of junk washing cars at a gas station; he lifts the skirt of all girls who look like Yuki), etc. will become new characters.