There seems to be a universal experience among those who get hooked on Space Battleship Yamato: watching that magnificent ship on the screen makes you long to see it in real life. Obviously, the opportunities to do so are a bit limited, so the next best thing is a toy or model.

Fortunately, those are available in abundance. In fact, having been rendered in the 3D world more than 70 different times, Yamato just might be SF’s most reproduced spaceship. Why so many? Apart from the zeal of licensors to sell a Yamato for all occasions, there are at least two motivating factors. First, the nature of hand-drawn animation means that you seldom see the same exact ship twice. Proportions and details change from scene to scene, and no matter which one is referenced in the making of a 3D version, it is never going to be definitively correct. Thus, the drive to make a “perfect” Yamato may never be satisfied.

The second factor is the simple joy of turning a Yamato around and around in your own hands, studying it from any angle you want and being mentally transported into its world. Only rarely does a fictional creation continue to hold that kind of mystique for adults as well as children.

Beginning with this article (the first of four) we’ll take a look at every single one of those renderings from smallest to largest. With over 70 Yamatos to examine, there will be plenty to talk about. Each of these has been profiled elsewhere on our site. They can be found (with countless other products) via our articles on toy history and model kit history.

Megahouse, August 2007
The smallest of all Yamatos came as a bonus item, a mere 3cm (1.18″) micro-miniature alongside an 8.5cm (3.34″) figure of Zordar’s Dreadnought. The two are not actually to scale; Yamato would have to be about the size of a grain of sand at this scale. But then it could hardly be called a Yamato at all. 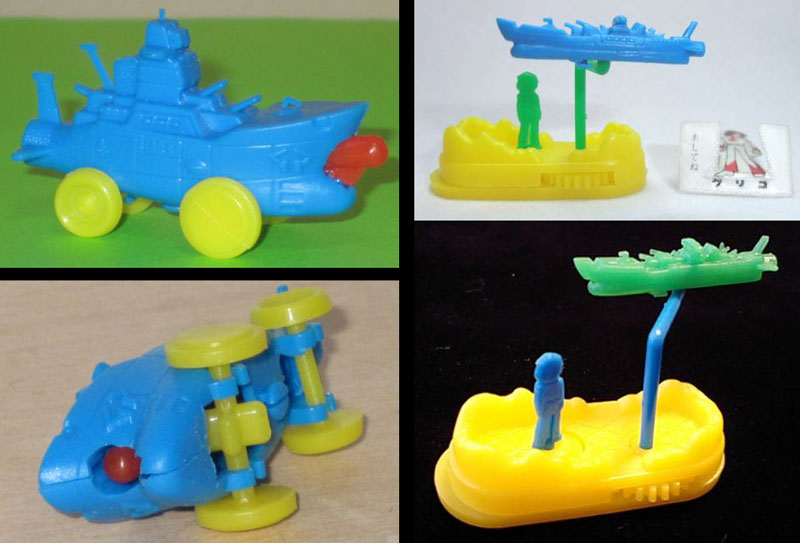 Ezaki Glico Co., 1980
These minis came packaged with Glico gum in 1980, released as tie-ins to the new Yamato III TV series in the fall. These were the only two Yamatos in a set that also included Kodai’s car, Analyzer, a Cosmo Tiger, and a Galman fightercraft. See the whole set here. The one on the left could eject a tiny missile out of its bow as it was rolled across the floor (how many of those must have been lost in vacuum cleaners?), while the one on the right appeared content to simply rotate along with its tiny crewmember.

Nomura Toy Co., 1978
Nomura was Yamato‘s first real toy licensor, originally a manufacturer of tin toys. They teamed up with paper goods manufacturer Amada to produce a wide variety of “gummy” figurines which cost very little to make and could be stamped off by the truckload. Products like these first appeared in Japan’s 1977 “Supercar” craze (ignited by a spate of racing toys, movies, and anime) and soon became ubiquitous. They were available in multiple colors and two basic sizes. The Yamato shown here was just under 2 inches long. The molds were later acquired by Popy Toy Co. and this particular “gummy Yamato" became a game piece in Popy’s Be Forever board game.

Musashi Enterprises, 1997
This one bears the distinction of being the one and only Yamato that originated on American soil as part of the Fleet Battle System tactical game series from Musashi Enterprises. Read all about their lineup here.

September 2005
Japanese convenience stores often promote one tie-in campaign or another with lineups of collectible figurines from anime or films. 7-Eleven did so with a set of Yamato figures that included two versions of the ship; one firing (about 2 3/8″) and one launching (about 2.5″). The set also included other ships and some characters.

Unifive, May 2000
This company, a branch of Bandai devoted to high-end metal collectibles, released a handful of Yamato products to ride the wave of resurgence caused by the Playstation games. This Yamato would attach to a keychain and light up metal detectors. It was available in two variants, the unfinished metal version shown here and another with the traditional hull colors.

Organic Hobby, December 2009
Most of the merchandising attached to Yamato Resurrection came out of Organic Hobby. This SD (Super Deformed) keychain was one such trinket, which featured an LED light in the Wave-Motion Gun. This is the smallest Yamato with internal lighting, which becomes more common as sizes increase.

Organic Hobby, December 2009
Capsule toys are typically sold in vending machines and have been released in staggering numbers over the last few decades. Owing to the small number of toys released from Resurrection, this is so far the only source of mecha toys for all but the remodeled Yamato. They were sculpted by professional modeler and Yamato mega-fan Nobuyuki Sakurai.

Sunkus, April 2003
“Mascot Figures” is another catchall term, meant to describe something that can be attached to a keychain, purse, cell phone, etc. and carried along on your daily route. This Yamato mascot came in a set of nine released by convenience store chain Sunkus. To get some extra mileage out of this set, Sunkus produced a painted version of each along with several unpainted versions in metallic plastic. Pictorial evidence indicates that these figures were released as part of a soft drink promotion.

Lawson, December 2008
Lawson, one of the bigger convenience store chains in Japan, released eight ships as part of a canned-drink promotion. Each could be mounted on its own stand or combined in a separate domed display base. This was the first Yamato product to tie in with 2009’s 35th anniversary of the first TV series.

Megahouse, July 2006
Another subsidiary of Bandai, Megahouse released a set of five miniatures which were widely distributed and warmly received, leading to several consecutive sets to form the “Cosmo Fleet Collection” series. Each set included a Yamato variant; a version with wings, a gold-painted version, a cutaway, warping, and another with an asteroid ring.

Seiko, 2000
The wristwatch was the main feature of this small collectible set, which received the Leiji Matsumoto stamp of approval. The secondary item was another metal Yamato for your keychain.

Banpresto, March 1999
Banpresto, a division of Bandai specializing in toys for “UFO Catcher” arcade games, played a major role in bringing the saga back under Leiji Matsumoto’s copyright tenure (1998-2002). They created two sets of keychains, one for the first Yamato story and another for Farewell to Yamato. Each featured the title ship.

7-Eleven, September 2005
In addition to the two shown earlier, the set from 7-Eleven also contained this slightly larger Yamato in normal cruising mode.

Nomura Toy Co., March 79
This was one of the first all-metal Yamatos, which was paired with an Andromeda at about the same size.

Though the manufacturer’s name is not known, only an Otaku could think up this strange little contraption, in which a pull of the bow cap strikes a flint that sets off a Wave-Motion lighter.

Banpresto, December 1999
A keychain mascot is one thing, but a keychain mascot with a penlight is quite another. There were five figures in this set, each equipped with a button that could help you find whatever you just dropped while fumbling with your keys in the dark. The set included a Yamato with wings and another without. Naturally, its light was in its Wave-Motion Gun.

Bandai, December 2010
DG stands for Digital Grade, a computer-controlled painting system developed by Bandai to bring an astonishing degree of precision detailing to miniature toys. The process has previously been used to boost action hero figures to a new standard of excellence, and Yamato joined the lineup in spectacular fashion with both a normal and cutaway version.

Banpresto, March 2000
Returning to the SD world, Banpresto delivered another Yamato, this time with a removable panel to show off the inner workings, which bore very little resemblance to animation designs but could at least light up impressively.

Bandai, January 1979
This is the first model kit in our progression, Number 1 in a series of 30 low-priced models (only 100yen apiece) that turned out to be one of the most successful products Bandai ever invented. They were released from 1979-1981 and reissued many times over subsequent years.

Popy, December 1980
After the 1978/79 tenure of Nomura as Yamato‘s first toy licensor, Popy took over in 1980 and 81. Their lineup included a set of ten miniatures sold both individually or in multipacks. They were plastic casts of Bandai’s classic Mechanic Scale model kits, preassembled for fans who didn’t care to do the work themselves.

Nomura Toy Co., 1978
In addition to the 20-yen gummy erasers shown earlier, Nomura also did a larger 50-yen series. The Yamato from this set lead to a 2-color version shown below.

Nomura/Popy, 1978 & 1980
This was a miniature with multiple lives, initially released by Nomura (packaged by Amada) in both grey and blue variants for Farewell to Yamato. It was later reissued and repackaged by another toy manufacturer called Marukoshi and distributed by Popy for Yamato III. The “deluxe” version came unassembled with a larger base. Popy also repurposed it as a component of their Wave-Motion Gun shooter game

Taito, July 2010
Game company Taito has been a steady Yamato licensor since 2007, following Banpresto’s lead by creating various products for the UFO Catcher-type arcade games in Taito arcades. In 2010, they moved into the realm of personal electronics starting with this 4.75″ 1Gb USB stick. The engine pulls off to reveal the key. The ship is a scaled-down version of Taito’s much larger Super Mechanics Yamato toy.

Continue to Part 2: Miniature to Midsize