In this part, we round up all rest of the Yamatos that can fit in one hand, which total a couple dozen all by themselves…

Banpresto, September 1999
It may have looked simply like a fine little replica, but a single pull would reveal a sturdy ballpoint pen inside. And when the ink ran dry you’d still have something to display, a far better fate for an empty pen than ending up in a landfill. Banpresto made three of these: Yamato, Andromeda, and Dessler’s battleship.

Mimuko, July 1999
After reviving Nomura’s 1978 diecast Yamato (shown farther down this page), Mimuko’s next release was a series of high-quality miniature spaceships branded as the “Museum of Leiji Matsumoto” series. Made of sturdy polystone resin, they were replicas of Bandai’s classic Mechanic Collection model kits. Three versions of Yamato were first out of the starting gate. No. 00 was a limited numbered version painted silver, No. 01 depicted Yamato in space, and No. 02 showed Yamato in drydock.

Nubel International, April 2004
A year after the Sunkus set, toy and novelty manufacturer Nubel rolled out a set of five candy toys (sans candy) which were slightly larger and definitely easier on the eyes. This set included Yamato, Andromeda, Dessler’s battleship, a Cosmo Zero and a Cosmo Tiger II.

F Toys, November 2006
Two variants of this Yamato were released: an A type (grey/red) and a B type (blue/red). The following year, a museum dedicated to the IJN Battleship Yamato opened in Kure Japan. Exhibits featuring Space Battleship Yamato were added later, and a few relevant products appeared in the museum gift shop including this one in custom packaging.

Team Strike, 2010
This was the one of the first models released for Yamato Resurrection, which (so far) are limited to high-end garage kits. Team Strike also made a slightly larger version along with a Shinano and tugboat.

Popy: November 2006
After 25 years of separation, the name ‘Popy’ finally appeared on a Yamato product again with a set of 10 miniatures, roughly the same size as the original Bandai Mechanic Collection model kits. Like the Cosmo Fleet collection, they were sold in the trading figure format. There were a total of five sets, each of which contained a Yamato.

Unknown manufacturer: June 2011
Though the source of these two remarkable pieces is unknown as of this writing, their value is clear. At left is a 24k gold Yamato with a price tag of 157,500 yen or about $2,000. At right is an Ag1000 silver Yamato priced at 31,500 yen or about $400. Both come with acrylic stands and are definitely for the collector who has everything.

Banpresto, May 1999
This “Super-Deformed”-style Yamato was weighted at the bottom to stay upright in a pool or tub while its little windup propeller zipped it along at attack speed. That is, if any serious fan could bring themselves to get the thing wet. Banpresto also made an Andromeda watership and others from Captain Harlock.

Banpresto, May 2000
With this set, fans could hold a laser-emitting Yamato pistol and take pot shots at an apoplectic Super-Deformed Dessler figure. Hitting a light sensor in his belt caused a spring to pop out of his feet and knock him over.

Team Strike, 2010
This Resurrection garage kit from Team Strike was half-again larger than the one shown farther up the page, slightly more detailed but following the exact shape since both were generated from CG data used in the film itself.

Popy, October 1980
The first release from Popy during their early tenure as a toy licensor was this combination diecast & plastic Yamato painted in metallic colors. Action features: a button on the upper hull could fire missiles through the Wave-Motion Gun, the third bridge could tuck in to let the ship roll around on metal wheels, the wings could pop out, and panels on the forward bow opened to reveal a new Cosmo Sonar from Be Forever.

Nomura Toy Co., October 78
This was very first Yamato toy, and a true favorite among fans who had been frustrated by the “Ã¢â€šÂ¬Ã…â€œkiddified”Â model kits that preceded it. Not even the flat hull bottom and the off-model fightercraft detracted from the fact that you could hold this finely-crafted hunk of solid metal in your hand and feel closer to the real thing. Bonus features included pop-out wings, an opening hangar door, and a “space panel” backdrop. It was so well-remembered that a perfect replica of it would be released 20 years later to kick off a Yamato revival.

Taito, November 2010
After releasing a mini Analyzer with built-in speakers, Taito struck again with another speaker system for computers and MP3 players topped by a Yamato with a light-up Wave-Motion Gun. Like Taito’s USB stick, it was a scaled-down version of the company’s Super Mechanics toy from 2007.

Nomura Toy Co., November 1978
Through curious circumstances, Nomura was able to release model kits during its tenure as a toy licensor, even though Bandai was already doing the same. They may have intentionally been limited to a single run, since they were never reissued afterward. Though not as sleek as the Bandai version, this kit is still fondly remembered for its proportions, which some felt were a better representation of the ship. Originally released for just 500 yen, it now fetches astronomical collectors’ prices.

Popy, 1980
What could be better than a Yamato you held in your hand? A Yamato with a pistol grip that could shoot things! The red-handled version featured lights and sound, while the blue-handled version was a Wave-Motion watergun to douse your friends.

Bandai, December 1974
The first-ever Yamato model was a highly-simplified kit, light on detail with a large friction motor where the third bridge should have been. More a toy than a model, it holds the distinction of being the very first 3-dimensional version of the famous ship. The tiny Wave-Motion Gun port is an artifact of the early preproduction art on which the kit was based. 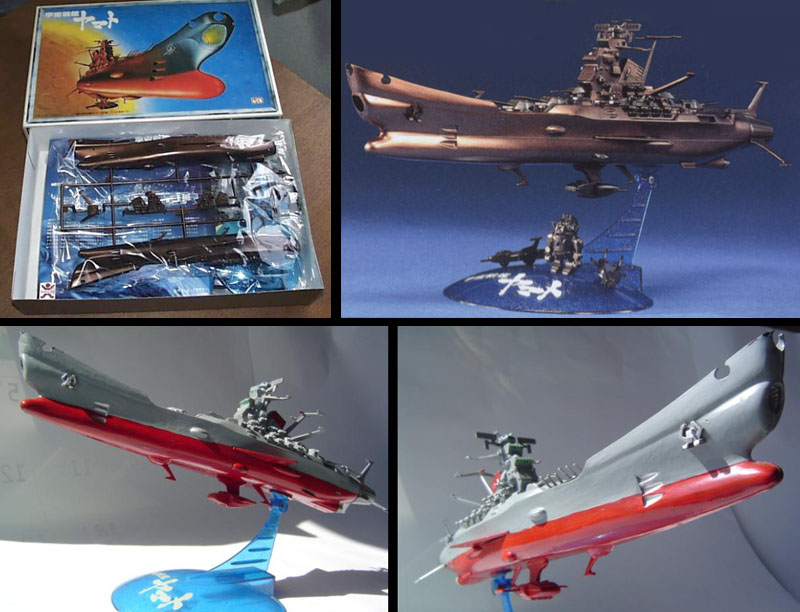 Bandai, March 1978
Calculated at roughly 1/1000 scale, this version was resculpted from the 1974 model to more closely resemble the anime design. The windup motor was replaced by a pivoted slide-on stand. The plastic had a golden-bronze finish and the kit included a tiny Analyzer and two fighters, which had also been included in the first Yamato model. It was reissued in anime colors and new packaging in July 1978 and August 1980

Bandai, March 1983
Released the same month as Final Yamato, this was Bandai’s last Yamato model from the production years, and was a fitting representative of the craftsmanship they had achieved after almost ten years. Yamato models provided the company with a hugely successful foundation upon which it became a world leader in the hobby industry.

Mimuko, November 1999
The Triple Cast Yamato DX was twice as long and much heavier than Mimuko’s earlier “Museum of Leiji Matsumoto” version, and a near-exact replica of Bandai’s 1/1000 model. It was followed a month later by the Triple Cast DX II, repackaged in a new box for Japanese Toys ‘R’ Us stores.

Franklin Mint, 1989
A limited number of these was made by the Japanese branch of the Franklin Mint. The Wave-Motion Gun and rear engine nozzle were gold plated and the engine port itself was glass. It was also one of the last Yamatos to be sculpted with a flat bottom, a common feature until the 1990s revival got seriously underway.

Banpresto, September 1999
This Yamato was of particular note for being the first one sculpted with a rounded belly as seen in the anime. It took 25 years, but someone finally got it right. From this point onward, the vintage flat-bellied Yamato was a thing of the past.

Popy, October 1980
Estimated at 1/900 scale, this was one size larger than Popy’s PC-13 toy with very similar construction but more plastic parts, a different stand, and some additional action features. Instead of a tuck-in third bridge the toy now had fold-down wheels, and a pull-out section was added to mimic the port-side hatch for the Cosmo Hound.

Nomura Toy Co., December 1978
Stretching almost a foot long and weighing more than any photo could convey, this became Nomura’s most popular diecast toy ever (though to be accurate, it had some plastic parts too). The proportions were virtually the same as the 1/1300 version, but the fightercraft were more accurate and missiles could be fired from the forward launch tubes

Plex, February 2011
This is the newest Yamato as of this writing, another “Super-Deformed” sculpt which for reasons still unknown was marketed as a “normal” version. But the origin of the Plex company is no mystery; they are the manufacturer formerly known as Popy, and still a toymaking branch of Bandai.

Continue to Part 3: Midsize to Mighty