This retrospective essay was written in 2000, on the occasion of a new CD collection. From 1999 to 2000, all the previously-unreleased Yamato soundtrack music was issued in a set called the “Eternal Edition.” Each volume in this set featured extensive liner notes and commentary. Presented below is the commentary for Be Forever Yamato, written by Yu Hayakaya.

Be Forever Yamato (a title that could be interpreted as the last episode of the saga) was released on August 2, 1980, approximately one year after the broadcast of The New Voyage, which was the introductory story to this movie. Be Forever is a magnificent work in terms of its scale and appearance, worthy to be the “third work” of Yamato. [editor’s note: the Quest for Iscandar was considered the “first work” and The Comet Empire was the “second work.” Although The Bolar Wars is titled “series 3,” it is in fact the “fourth work” of the Yamato saga.]

The abrupt beginning of the movie surprised the audience. The Dark Nebula Empire, which first appeared in The New Voyage, invades the Solar System, immediately conquers the capital of the Earth, and sets a neutron bomb which can destroy the human race. 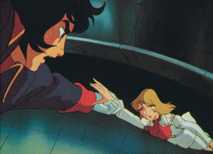 Followed by this introduction, Susumu Kodai and the others discover that the control device for the neutron bomb is located on the mother planet of the enemy empire, and in order to destroy it they leave for the asteroid Icarus, located outside of the orbit of Mars, where Yamato is hidden in case of emergency.

However, they are attacked by the enemy, Yuki Mori fails to board the escape ship and is left behind on Earth. For the first time in the series, Kodai and Yuki are entirely separated. This can be appreciated as a bold attempt to express the grand theme of this movie, “to love is to believe.” The person who partners with Yuki on Earth is Lt. Alphon of the Dark Nebula Empire, who becomes the story’s tragic handsome villain.

During the fight, Mamoru Kodai sets off a suicidal explosion to cover the Earth Defense Force Commander’s escape, which emphasizes the subplot of a resistance story against oppression.

Yamato‘s crew arrives at Icarus and boards the newly-reborn Yamato, furnished with a variety of new equipment and proudly redecorated with an anchor mark on the bow and white rings on the main cannon barrels. This change of appearance reinforces Yamato itself as a character and makes a strong visual impression. However, the redesign of Yamato was used only for this work and
the TV series Yamato III. 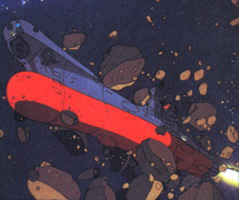 The shape of the asteroid Icarus evokes the image of a rock bed-like spaceship, which was one of the earliest ideas for Yamato, and the scene in which Yamato bursts out of the rock bed can be seen as the beginning of a true “new voyage,” by cutting off the stream which Yamato had previously followed.

A reborn Yamato is not the only new encounter the crew makes in Icarus. There are also new characters: Cosmo Tiger pilot Shiro Kato, who succeeds his late elder brother Saburo, and Sasha, the daughter of late Starsha and Mamoru, who has grown up within one year due to her special alien biology. At the beginning, she is introduced as Mio, the niece of Sanada. This lovely female character, designed by Shinya Takahashi (at Toei Animation, Co. Ltd.) and enlivened by the voice of Keiko Han, is presented as a flesh-and-blood woman, widening the depth of this Yamato story, the only one which does not center on a symbolic goddess-like woman.

Moreover, Yamanami, President of the Space Soldier Training School (and Okita and Hijikata’s successor), is appointed as the new captain of Yamato, in order to “break the powerful enemy.” [Editor’s note: Okita, Hijikata, and Yamanami are all named after famous samurai.] Accordingly, the reborn Yamato heads straight for the enemy’s mother planet.

In terms of the story structure, it is surprising that Dessler, who featured so prominently in The New Voyage, does not participate this time. But this helps to focus on the psychology of Yamato‘s crew and increases the tension throughout the story. The next step for Dessler, who is deeply popular with Yamato fans, is fully described in the TV series Yamato III, and this further strengthens the image of Dessler as the antagonist of Yamato on TV.

The film’s staff returned to the same positions as on their previous feature film Farewell to Yamato. Tomoharu Katsumata, credited as Chief Director, was essentially in charge of directing animation and demonstrated his natural skill for strong presentation. Aritsune Toyota, a writer credited as SF concept cooperator, did an extravagant job. Sense-of-wonder and SF gadgets are on parade, including the neutron bomb mentioned above, the double galaxy and crystal city as well as the enemy’s mother planet disguised as a “future Earth.” Compared to its contemporaries in animation, Yamato was always a step ahead. 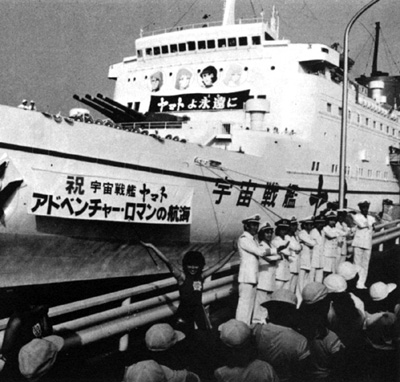 Many promotional events were organized around the release of this film. Such attractions as “The Voyage of Adventure-Roman,” a cruise between Kawasaki and Hyuga on a luxury liner decorated as Yamato, and a customary musical event “Yamato Festival in Budokan,” were gloriously coordinated.

Also, technical advances were added to the film itself. The chief example was the “warp dimension” technique, which had been kept secret until the release of the film. Before your eyes, the projected picture changed from Vistavision to Cinerama scope after Yamato goes through the Dark Nebula and into the unknown space of the enemy.

The sound also changed from monophonic to 4 channel magnetic stereo. At that moment, the entire scale of the film expanded. It was entertaining because it reminded me of the works of William Castle, who built many contrivances into the theater which played his own films. One can only get the full impact of this change at a theater. (On home video, when the picture switches to wide screen, the image area becomes narrower.) It is getting increasingly difficult to see this film at theaters because the projection staff has to attach an anamorphic lens to the other projector and wait while screening the first reel, and the number of theaters equipped with 4 channel magnetic stereo sound is extremely small. (The present stereophonic sound uses digital multi channel systems.)

Even in a time of high-quality home-video hardware, I would rather experience Be Forever Yamato through devices only found at a theater and with a dignity of presentation at every level–story, direction, music, and art—on a big screen once again. To revive Yamato today with new film prints and digitally remastered sound for the complete theatrical experience, while dreaming of such a plan, I now shall submit myself to the rich melodies of music by Hiroshi Miyagawa.

Special thanks to Michiko Ito for translation