Two years before Be Forever Yamato became Japan’s summer event of 1980, Farewell to Yamato did the same thing. Prior to that film, the world of anime journalism was practically nonexistent. Producer Yoshinobu Nishizaki set out to change that by opening the doors to the media at all stages of production. Since the 1977 Yamato movie had been such a monster hit, everyone was anxious for news about the sequel, and this laid the foundation for new magazines, mainstream media coverage, dedicated books on the subject, and much more. (Read the complete coverage of Farewell here and relive the birth of anime journalism for yourself.)

When it came time to do the same with Be Forever, the mechanism was firmly established, and the amount of coverage was simply staggering. The dark days of scratching around for crumbs were long gone; if you were a Yamato fan in 1980, the newsstand was overflowing with gold. This collection is a time machine back to that summer, providing English-language access to the entire print-media deluge. Click on the highlighted links to see and/or read individual articles. Each article is linked to the next for continuous reading. 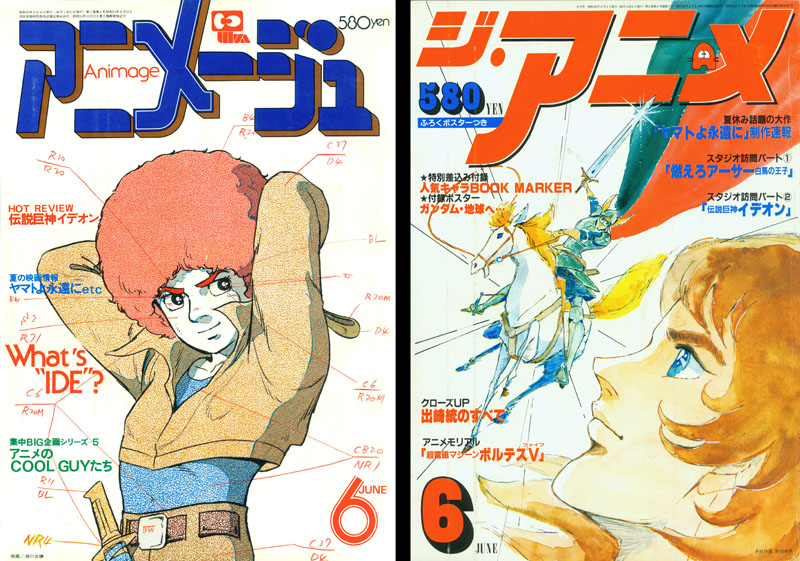 Animage was the first anime magazine from a mainstream publisher, and its first two issues arrived in the summer of 1978 with Yamato cover stories. Two years later, the magazine was stronger than ever, since it had been perfectly timed to clamp its jaws around the anime explosion. By 1980, its pages were overflowing with news of TV and film productions. Its first article on Be Forever appeared in the June issue (published in May). It was only three pages of animation art, but bigger things were soon to come.

Prior to Animage, the only magazine of its kind was OUT, which first ignited the Yamato boom of 1977 and went on to become the “otaku bible” (read a full account of its history here). The Anime became Animage‘s first true mainstream competitor when it premiered in November 1979, as sure a signal as any of the rapid expansion of anime. Naturally, there was a lot of crossover between the rival publications, and readers benefited from their attempts to outdo each other with colorful layouts and unique coverage. The Anime was destined to cease publication in 1987, but played a significant role during its tenure.

The magazine’s first article on Be Forever was 9 pages, fairly light on content since there still wasn’t much to write about at this stage. It included speculation on what the launch scene might look like, an overview of Yamato‘s upgrades, a character lineup, and three short staff comments. 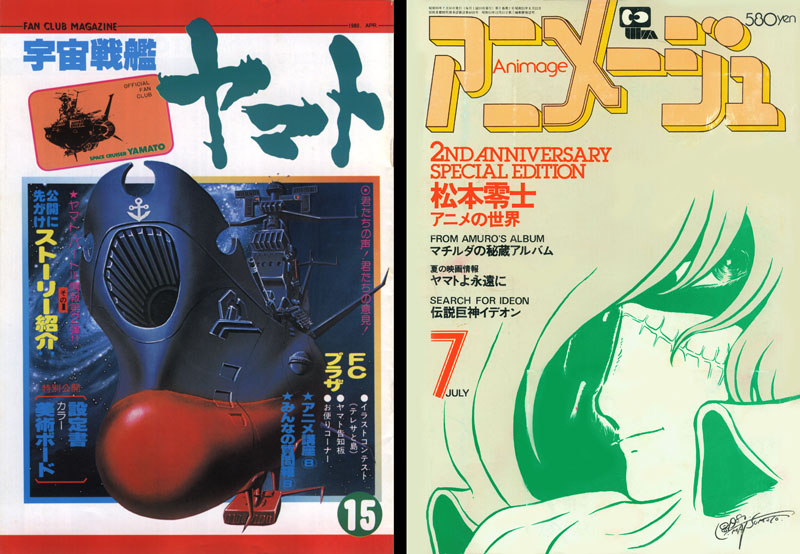 Of course, the official magazine of the Yamato fan club was the first to break all news, since it was published by Office Academy itself–the nerve center of Be Forever production. Normally published bi-monthly, it went monthly during the summer of 1980 to stay ahead of the curve. Like the other magazines published in May, it was comparatively light but this was soon to change.

The Be Forever content from this magazine was included in a prior “Making of” article. Read it here.

This issue of Animage only devoted 5 pages to Be Forever, but they were definitely a step forward. There was a story digest, three short interviews with members of the production staff, and an interview with Yoshinobu Nishizaki in which he first mentioned the coming of a third TV series and also dropped the term “Warp Dimension.” Anime journalists would spend the next two months trying to figure out what it meant. 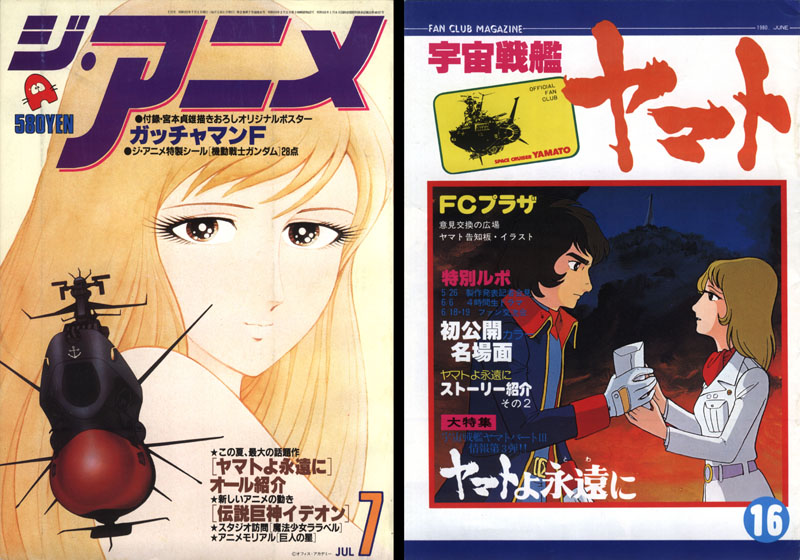 The Anime went all-out with this issue, blowing Animage out of the water with a whopping 20 pages of Be Forever coverage. The movie was well into animation by this time, and new information was pouring out hard and fast. The content of this article was colorful and wide-ranging; it included the first report on the May 26 press conference, generous helpings of character and mecha art, an extensive interview with Yoshinobu Nishizaki, a character guide, a round-table fan discussion (always a lively feature), and the first announcement of the forthcoming Festival at Budokan. But the true highlight was a first-person account of a visit to the production unit at Toei Studio, which treated its subject with the breathless enthusiasm of a true fan.

This issue of the fan club magazine was the heaviest yet in terms of pages devoted to Be Forever. Like The Anime #8, it kicked off with a report of the May 26 press conference, then moved on to a story digest, sheet music for two new songs, and the first reports of fan club meetings and the Be Forever live radio drama, broadcast on June 7

Read all the Be Forever content from this issue here. 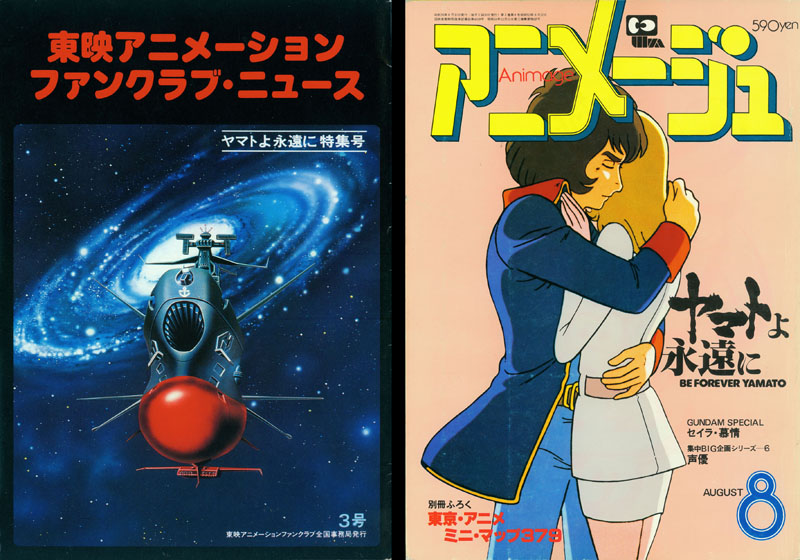 Since Toei was the production company for the film (with all preproduction coming out of Yoshinobu Nishizaki’s studio, Office Academy), Be Forever was a natural subject to cover in this issue of their own fan club newsletter. It was a modest publication of just 12 pages with minimal color, but still managed to get some unique and exclusive content. There was a brief bit about the May 26 press conference, comments from both Nishizaki and Leiji Matsumoto, a collection of little-known production notes, and announcements for the three biggest summer events: the sea cruise, the train tour, and the Festival in Budokan.

See the pages and read the text here:

Animage struck back with this issue, loading up 16 pages with Be Forever coverage and a substantial collection of new artwork. They lead with the longest story guide seen so far, impressively-detailed character and mecha guides, interviews with the various production departments at Toei Studio (giving some of the staff members their first and only public exposure), event details directly from the publicist, and a brief report of the June 6 live radio drama. 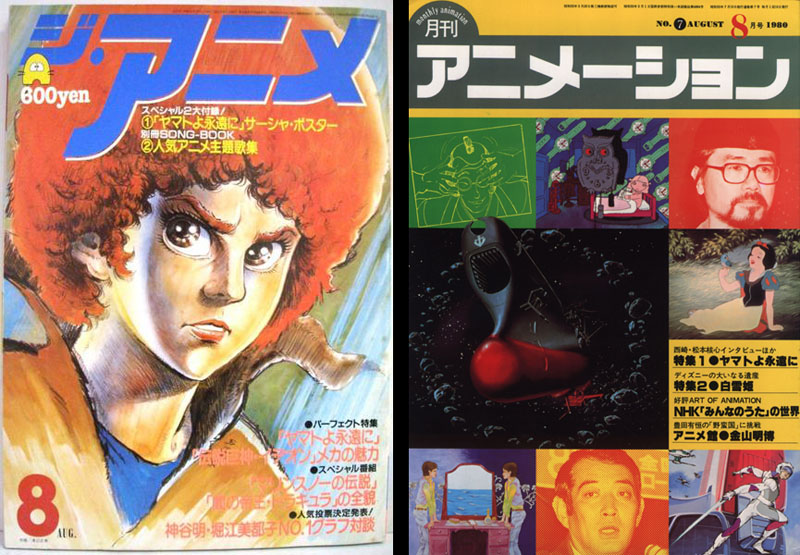 Not to be outdone, The Anime turned out another beefy article in July, this time 19 pages long with as much variety and creativity as their June issue. There was a hefty guide to characters on both sides of the story, several new color scenes, a one-of-a-kind mission map (never reprinted elsewhere), the biggest and most vivid report on the June 6 live radio drama, sheet music for new songs, and coverage of the June fan club meetings that went beyond the official fan club magazine (with an interesting scoop on what happened during the train ride between meeting sites).

Monthly Animation was an periodical unlike most of its contemporaries. Rather than packing in as much news and promotion as possible, they took an investigative approach: thoughtful essays and interviews with prominent industry figures that went far beyond their current projects. This issue featured a cover story on Be Forever with 15 pages that included unique interviews with Yoshinobu Nishizaki, Leiji Matsumoto, Animation Director Tomoharu Katsumata, and Assistant Director Kazunori Tanahashi. The capper was a short essay by the always-insightful Director Toshio Masuda.

This is the end of the page, but we are only halfway through the Be Forever Yamato Time Machine. Click here to continue to Part 2 where coverage continues in Animage, The Anime, the mighty OUT Magazine, and plenty more!

With the publicity doors wide open, practically any entertainment magazine that wanted to run something on Be Forever was welcomed into the fold. Over time, clippings from these magazines fell into our archive without reliable source data. Therefore, we can offer a random smattering of what these publishers had to offer.