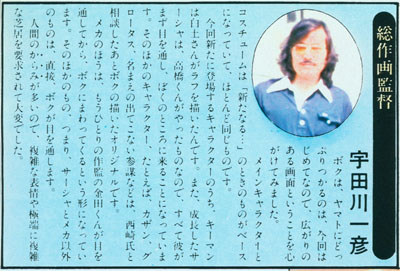 Because this is my first time to be completely immersed in Yamato, I kept in mind the expanse of the big screen. As for the main characters and costumes, most are based on those of The New Voyage and are basically the same.

As for the characters that are newly-appearing this time, Mr. Takeshi Shirato drew the rough for Kiman [Alphon]. Mr. Shinya Takahashi was the one who took a look at everything and designed the grown-up Sasha.

Other characters such as Kazan, Grotas, and staff officers that were not seen before were designed by myself after consultation with Mr. Nishizaki.

All the mecha come to me after going through [animator] Yoshinori Kanada and [animation supervisor] Sakuga Kantoku.

Other than Sasha and the mecha, I supervised everything directly. It was extremely complex work and required some very serious expressions. 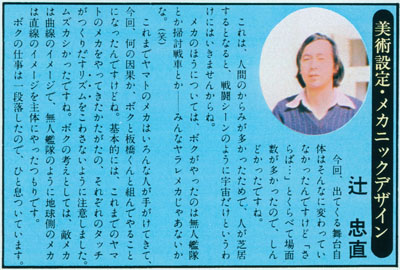 The settings didn’t change much, but the number of scenes in comparison with Farewell to Yamato made it difficult.

Since we have many shots with people interacting, the backgrounds can’t just be star fields behind battle scenes

As for mecha, I worked on the automated fleet and the unmanned tanks–all for them to just be destroyed in the end. (Laughs)

Many people have been involved with Yamato mecha before now, but cause and effect paired me up with Mr. Katsumi Itabashi this time. Basically, we wanted to avoid breaking the rhythm of each [previous] person’s touch when they created Yamato mecha. And it sure was difficult.

It was my thought to give the enemy mecha a curved image and to use more straight lines for mecha on the Earth side, such as the unmanned fleet. Because my work was completed in the first stage, I can breathe easy. 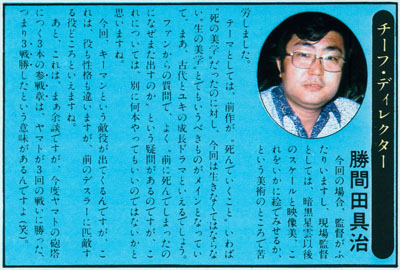 This time we have two directors. As for me as the chief director of the studio, it was not an easy task to show the huge scale of the Dark Nebula in the latter part using only the background art.

The theme of the previous work (Farewell to Yamato) was “we’re going to die,” so to speak, or the “beauty of death.” This time, the “beauty of life” is the main theme, represented by the growth drama of Kodai and Yuki.

A common question from fans is, how can you bring characters back from the dead? And I guess it’s all right to do it as often as necessary.

This time there is a new villain called Kiman whose role is comparable to Dessler, but his nature and position are different. And this is a digression, but Yamato‘s gun turrets get three stripes this time, which represent the three previous victories in battle. 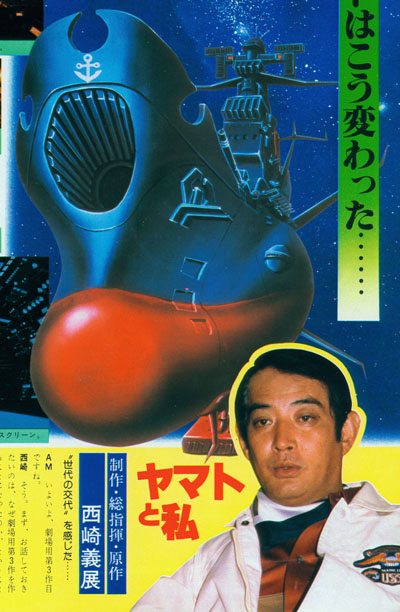 I Felt a “Generational Shift”

Animage: This is finally the third theatrical film.

Nishizaki: Yes. I first want to explain the reason I decided to make the third theatrical feature. There were nearly 10,000 [fan] letters requesting a new Yamato movie, and that’s where it started. On the other hand, there was certainly the opinion that it should have ended with Part 2. But when I analyzed it, I felt a “generational shift.”

Nishizaki: Yes. The first Yamato was in 1974. People who were in middle school and high school then are now members of society, and those who were 6 years old are now in middle school. Conversely, a work with middle school students as its target extended even to children in elementary school. Besides, the characters find popularity on their own, and fans accept them.

The world of Yamato has expanded so much in the last six years that we could never have predicted it. Hence, the fever to make the final theatrical feature happen resides in both the fans and in me. On the other hand, I cannot deny that it became very profitable in the meantime. But speaking for myself, I’m not the sort of producer who can make a work without a theme that appeals to me.

This time, in addition to the original concept, I also checked storyboards, wrote 100 pages of the script, and also specified some of the editing. I couldn’t have done it if I wasn’t deeply involved in the work.

Animage: The motif of the production is understood; what about the theme?

Nishizaki: In the previous two theatrical movies, the theme was love as shown through a man’s sense of duty and self-sacrifice. The third film has a bigger theme. Across space and between two human beings, between men and women, people who love each other should believe in each other.

It might be hard to understand, but the purpose of Yamato is not to show it directly. It is expressed in terms of action. While depicting action and mecha as realistically as possible, humans and their hopes take shape in the same way. 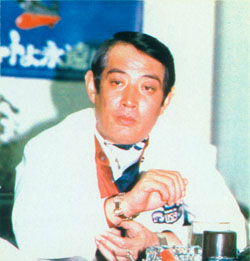 A Different Stage from Dessler…

Animage: When you look at it, it seemed to be the intention of the second film for Kodai and Yuki to die.

Nishizaki: Yes. It asked whether you could die for another person. It was the theme of the second movie, and was often found in classic short stories. Naturally, the mode of expression changes with the times. Such works should be expressed in the manner of their time period. I think it did that well.

Nishizaki: She grew up quickly because of Iscandarian blood. SF can be convenient. (Laughs)

Animage: There seem to be some groundbreaking plans‚Ä¶

Nishizaki: It is a new method called “Warp Dimension,” something never seen before.

Animage: What is it?

Nishizaki: I’ll just say that something surprising will happen on the screen. I don’t want to give away too many secrets. (Laughs)

(The conversation with Mr. Nishizaki moves to the details Yamato‘s reconstruction, which is shown earlier in this article.)

Animage: Will Dessler not appear this time?

Nishizaki: Dessler got too close to Kodai. The motif between Dessler and Kodai became their friendship. It needs to be part of a larger-scale story, so it will appear in the final TV series starting in October.

(This series is progressing steadily, too.)

Animage: Finally, what words do you have for the fans?

Nishizaki: Thank you very much for valuing Yamato for so long. I wish for you to remember every feeling and thought you have when seeing the film, and keep them as fond memories of youth.