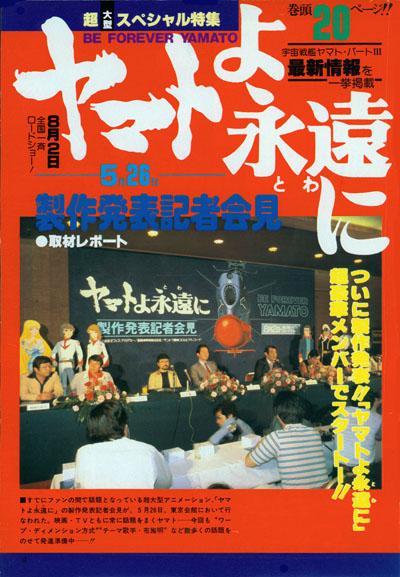 With a Super-Luxurious Crew, Yamato Launches!

In the 11th floor Gold Room of Tokyo Kaikan, everything was colored Yamato! A newly-illustrated image of Yamato with an anchor emblem from Be Forever was on a panel in the front of the room. The people in attendance were Leiji Matsumoto, Toei President Shigeru Okada, Executive Producer Yoshinobu Nishizaki, Composer Hiroshi Miyagawa, Chief Director Tomoharu Katsumata, Lyricist Yoko Yamaguchi, and singers Isao Sasaki and Akira Fuse.

The press conference began with the flash of cameras and a greeting from Toei President Okada.

Okada: Once again, I announce the production of Be Forever Yamato. Though Leiji Matsumoto and Yoshinobu Nishizaki previously stated “Yamato has ended,” we thought if we do it again we’ll get it right. (Laughter) The first and second Yamato movies each brought out more than six million people. This time, we’d like to bring out ten million.

This figure is nothing short of breathtaking. Toei’s theme park Eiga Mura [Movie Village] will reach ten million visitors this fall, but it took five years to accomplish this.

Producer Nishizaki, who gave Yamato to the world with great success and popularity, sat next to President Okada and gave the next greeting.

Nishizaki: It was certainly Yamato that made me famous. But I feel like I have to “graduate from Yamato” because, with the exception of a few on TV, almost all my works over the last six years were Yamato. Every time I made one, I was resolved that, “this will be my last Yamato.” But it’s possible that this resolve was the reason I had so much success.

Producer Nishizaki then explained how he selected the new staff, especially two people who are participating for the first time: Songwriter Yoko Yamaguchi and the well-known singer Akira Fuse, which was unexpected even to the fans.

Nishizaki: The songs sung in Yamato so far have been expressed from a male point of view. Therefore, I wanted one sung with the feeling of a woman’s viewpoint, which is why I requested Ms. Yoko Yamaguchi. Ms. Yamaguchi wrote her poetry to the theme “love is understood through separation.” It will be sung by a well-known vocalist who has not yet been announced. Akira Fuse will participate in composing songs as well as performing.

“It is Made as a Summary of Yamato” -Leiji Matsumoto

After Producer Nishizaki, the mike was given to Leiji Matsumoto.

Matsumoto: It feels like a long time since I started on Yamato. I never expected it to become such a long voyage, but this is the ship I boarded. (Laughter) Yamato has become an important work for me. This is thanks to Mr. Nishizaki. It’s time to settle Yamato once and for all, so I want to make Be Forever as a true conclusion. I asked myself, what was the meaning of the voyages of Yamato, and I want to make this my conclusive answer.

Matsumoto: My design concepts on Be Forever are those of a maniac [translator’s note: in 1980, this word carried the same meaning as “otaku” does today], so I’m afraid I put the artists through a lot of trouble, but I’ve heard that any artist has a hard time when I get involved, even if it isn’t Yamato. (Laughter)

Katsumata: I worked on Farewell to Yamato and will continue as Chief Director again. In the previous movie, I could only make art that fit with the story. But this time Mr. Matsumoto and Mr. Nishizaki had their art and story from the beginning. So I expected my work would be difficult.

In other words, Be Forever Yamato is an original work by two people: Leiji Matsumoto and Yoshinobu Nishizaki. It seems their image was pushed forward quite strongly. Also, the image is raised by the music of Mr. Miyagawa, who has continued to create Yamato music since the broadcast of the first TV series. 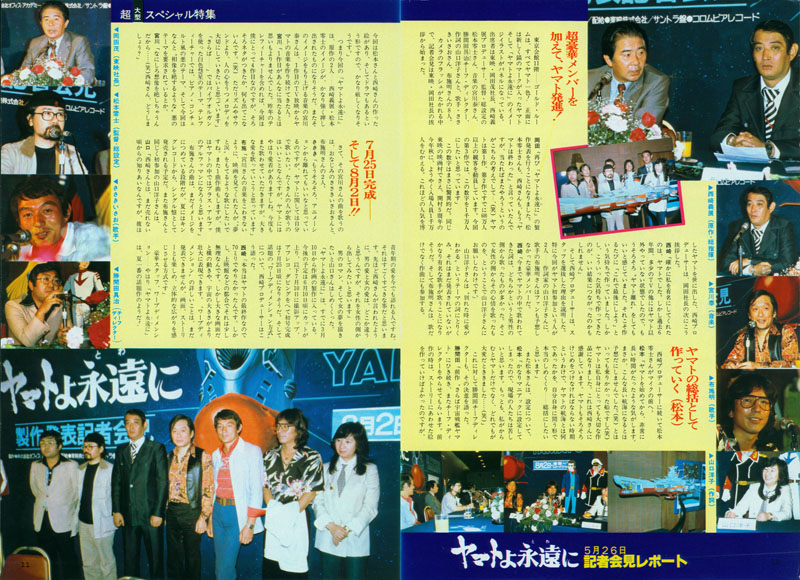 Miyagawa: I didn’t expect the first movie to become such a big hit. If you include last year’s telefeature [The New Voyage], this is the fourth time for me, and the material has slowly become exhausted with nothing new coming out. (Laughs) But using rhythm and sound, I want to carefully create melodies that touch people.

In Farewell to Yamato, the theme of the evil Comet Empire was performed on a pipe organ, and in the telefeature the enemy theme was played as a concerto with winds and piano. This time, Mr. Miyagawa was asked to come up with a new theme that goes “beyond the image of evil.”

Miyagawa: It is far beyond my imagination…Mr. Nishizaki, what would you do? (Laughter)

Completion on July 25…and then August 2!!

As for singing the music of Miyagawa, there are two: Akira Fuse and the familiar Isao Sasaki.

Sasaki: I think now is the time to retire from anime songs, but I still want to sing the Yamato songs myself. It’s good to allow many singers to contribute, but I still have a special fondness for Yamato. I will sing the Yamato theme this time too, and put all my passion into it.

Fuse: I want my song to allow the audience to cherish “dreams and tears” in their mind without disrupting the music of Mr. Miyagawa. I am composing a song myself, but I want to be an “alphaman.” I mean, the “alpha” of “plus-alpha” in Yamato. [Editor’s note: “plus alpha” is jargon for “extra boost.”]

Mr. Fuse’s music is still in production, but will be released as a single from King Records in the summer. Like Mr. Fuse, Ms. Yoko Yamaguchi is also participating for the first time.

Yamaguchi: I’ve been acquainted with Mr. Nishizaki since before he became famous, and he is someone who can still relate to the love of youth. I think that’s wonderful. As he said a moment ago, I want to look at the love between a man and woman from the woman’s point of view, which is slightly different. I want to portray man’s spirit of romantic adventure and the dreams of women.

Be Forever Yamato has already been in production since March 10. As for future plans, editing is scheduled to begin on June 10 with photography set to finish on July 10. Recording and dubbing should be finished around July 25.

Mr. Nishizaki made a comment regarding the topic of “Warp Dimension.”

Nishizaki: Actually, because it was to be the final work of Yamato, I wanted to do it in 70mm. However, it was impossible on account of the circumstances of movie theaters. But on a big screen, the size of movement and the scale of outer space can be more grandly expressed. I’m not able to announce the details about “Warp Dimension” yet, but it is a way to enjoy the story with the fullness of a three-dimensional expansion of the screen.

Be Forever Yamato, the luxurious staff, and Warp Dimension seem to be the number one topic this summer!