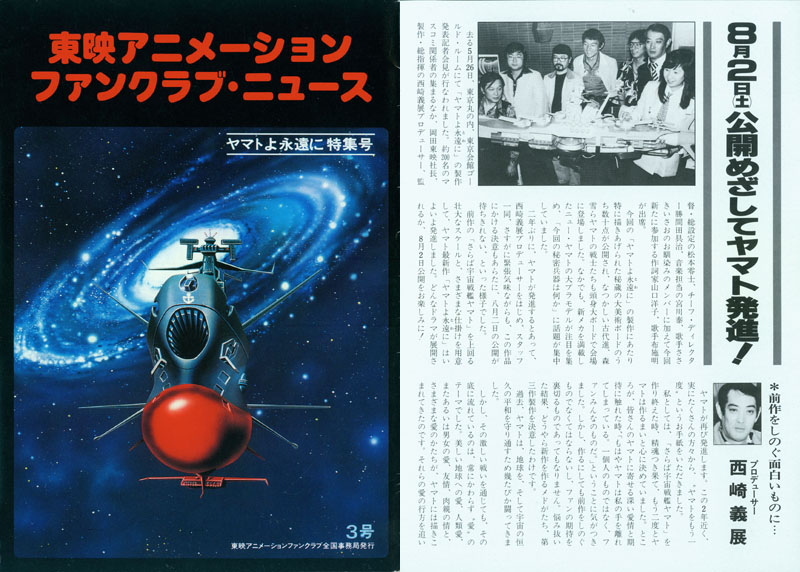 On May 26 in Marunouchi, Tokyo, a production announcement press conference for Be Forever Yamato was held at the Tokyo Kaikan Gold room.

Dozens of highlights were presented on treasured art boards, painted especially for the production of Be Forever. Even good old Kodai and Yuki were there in the form of life-size cardboard figures. A large model of Yamato drew special attention, fully loaded with new mecha and the topic focused on, “what are its secret weapons.”

It’s been two years since Yamato last launched [in theaters]. Everyone including Producer Nishizaki seemed a little nervous but showed renewed determination to make this film, and cannot wait for the premiere on August 2.

Various mecha and a magnificent scale even greater than Farewell to Yamato are being prepared for Yamato to finally launch in the new film, Be Forever. The public will be able to enjoy watching the drama unfold on August 2! 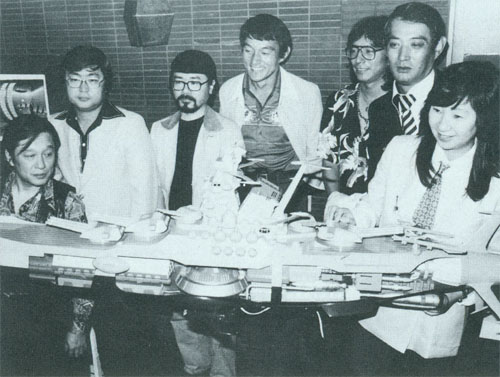 Toward an Interesting Thing that Exceeds the Previous Work…

Yamato launches again. Over the last two years I received many letters from people about Yamato.

When I finished making Farewell to Yamato I had used up all my energy and decided not to make Yamato again. However, when everyone told me of their love and hope that Yamato would return, I realized that, “Yamato has already left my hands. It no longer belongs to any individual, it now belongs to everyone. That is Yamato.”

However, if I were to make it again, it must exceed the previous work, or it would betray the expectation of the fans. The prospect of doing another one was driven by that concern, and that’s how I determined to make it.

In the past, Yamato and Earth fought many times to preserve the permanent peace of space. But flowing underneath all that intense fighting, the theme of “love” was always present. Love for the beautiful Earth, love of humanity, friendship, love between men and women, the love of family, and various other forms of love have all been presented in Yamato. While searching for the meaning of love, we said “we should not have fought them, we should have shown love” (the first work) and asked “could you die for someone you love?” (the second work).

That will not change in Be Forever Yamato, since the main theme is “love,” after all. This time we say, “to love is to believe in each other.” I think that has a strong appeal.

In the next voyage, Kodai and Yuki will become separated and be distraught. Until now, they have loved each other as comrades on Yamato. These two have fought together. But now Kodai will go to Yamato and Yuki must remain to overcome the crisis on Earth. Only when that time comes do they understand the true meaning of how important they are to each other.

Even when they are far away, their love has grown strong enough for them to believe in each other. And it isn’t limited to these two; as long as person loves and believes in another person, “the future of humanity is immortal.”

The future of this beautiful Earth is in our own hands. The “future of the Earth” is entrusted to Yamato on this new journey. Yamato does not launch just to fight a new enemy. They start out their voyage to seek the future of Earth, the path of virtue a human being should follow, and for “the future made by our own hand, for the people we love.” People in the modern world have lost empathy, and that’s why I have portrayed the passion of youth, advocated love and courage, and appealed to the importance of trust in one another, through Yamato.

I would be very pleased if you find some hope or delight from it. 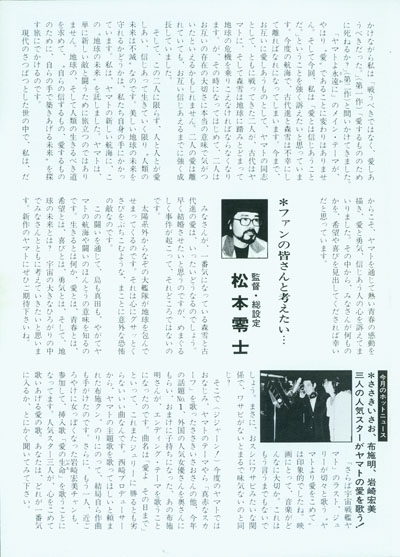 I Want to Thank of All the Fans…

Of all the things that interest everyone, most of you are concerned about the love of Yuki and Kodai. They may want to get married, but events unfold rapidly and there is no way around it.

A large, mysterious fleet approaches from outside the solar system and surrounds Earth. Like a wedge driven quickly into the heart, it is a truly fearsome, unexpected enemy. Through this fight, Sanada and the rest of the crew learns the real meaning of the voyage and battles of Yamato.

What is life, love, youth, hope, joy, courage, and the future of the planet? I want you all to think about this in the vast expanse of outer space. Please look forward to the new Yamato by all means.

In the last film, Farewell to Yamato, Julie sang with emotion the impressive ending song, From Yamato With Love.

How important is music for a movie? It goes without saying. It’s like the relationship of Sushi and Wasabi. Wouldn’t the one be bland without the other? Therefore, (ta-daah) it beomes familiar in the new Yamato.

Isao Sasaki sang the main theme and The Scarlet Scarf, but this year’s number one topic was his marriage to a foreign actress and the fact that they are expecting a child. Additionally, Akira Fuse will sing the ending theme. The song is Love Until That Day, which is just as good as the song by Julie.

When Producer Nishizaki engaged Fuse to perform the new theme song of Yamato, he volunteered to compose it by himself. Furthermore, female singer Hiromi Iwasaki agreed to participate and will sing the insertion song Life of Love.

Three popular stars will wholeheartedly sing these love songs. You’ll have to decide which one you like most.