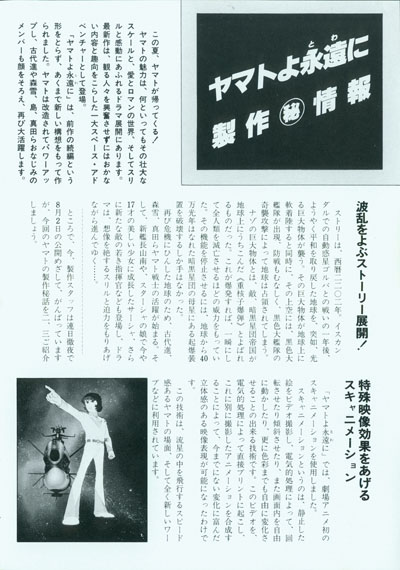 It can be said that the appeal of Yamato is its grand scale, its world of love and romance, and the development of the drama that overflows with impressive thrills. The latest in the series is released as a grand-scale space adventure film that will surely excite audiences with its plot and ideas.

Rather than taking the form of a sequel to a previous work, Be Forever Yamato was built entirely of new ideas. Yamato is remodeled and powered up, and familiar faces like Kodai & Yuki, Shima, Sanada, and many others take active roles again.

Story Development to Cause a Shake-up!

The story takes place in the year 2202. One year after the fight with the Auto-Planet Goruba at Iscandar, peace on Earth is broken by the sudden attack of a colossal, glittering object from space. As the massive object makes a soft landing on Earth, a black armada appears and overruns all defenses. The Earth is overrun and occupied by the surprise attack of the black fleet.

The huge, mysterious object (called a Hyperon bomb) comes from the Dark Nebula Empire and has enough explosive power to instantly wipe out all of humankind. To stop its function, the triggering device on the mother planet 400,000 light years away must be destroyed.

With Earth on the verge of this crisis, Kodai, Yuki, Sanada, and the other soldiers of Yamato go into action. Joining them are the new captain Yamanami, and Sasha, the daughter of Starsha, who has grown into a beautiful 17-year old girl. Furthermore, a young officer appears on the stage from the enemy side.

The drama advances as excitement and thrills mount beyond imagination…

By the way, the production staff is working hard day and night toward the August 2 premiere. Meanwhile, let’s introduce several of the secrets behind the making of this new Yamato.

Be Forever Yamato is the first theatrical anime to use the Scanimation technique. Scanimation takes a video picture, and through the use of electronic processing, it rotates, tilts, or moves it freely around on the screen, and can even use technology to change the color.

The electronic processing can print video directly by electronically synthesizing it with animation that was shot separately. This makes a three-dimensional image that was never before possible. The technique is used in scenes of Yamato flying past meteors and also achieves a totally new warp effect. 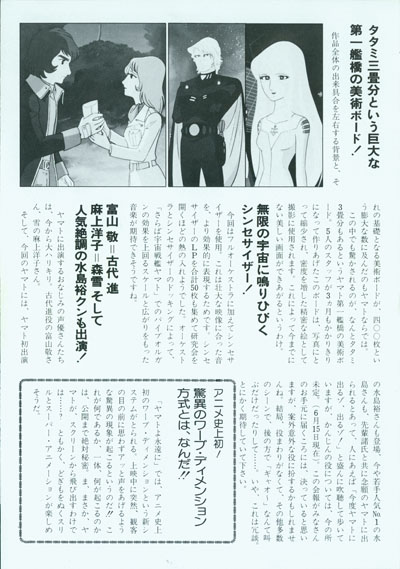 Gigantic Art Board of the First Bridge Deck!

Art boards are the basis for background paintings which influence the entire work, and Yamato has reached the enormous number of 400 art boards. Particularly surprising is the art board of Yamato‘s first bridge, which is the size of three tatami mats. [Translator’s note: about 3 x 6 feet.]

Five staff members worked on it for about three months, and the finished painting was photographically reduced to increase density and precision. The result is a beautiful, unprecedented screen image.

A Synthesizer That Resounds in Infinite Space!

A synthesizer is used this time as well as a full orchestra in order to more effectively express the sound of a magnificent picture. It created so much enthusiasm that over 50 LPs of synthesizer music were gathered for study.

By combining synthesizer with the orchestra, the music can be expected to exceed the scale of even the pipe organ heard in Farewell to Yamato.

Many well-known voice actors have appeared in Yamato up until now. Kei Tomiyama returns in the part of Kodai, and Yoko Asagami appears as Yuki. And this time the very popular Yuu Mizushima makes his Yamato debut as well. Mr. Mizushima is the most popular among today’s young voice actors and has longed to appear on Yamato with the senior voice actors he respects. So he tells everyone he meets, “I’ll be on Yamato! I’ll be on Yamato!” But the actual character he will portray has not yet been decided. (As of June 15.)

By the time this bulletin reaches you, it should be decided and it may be an unexpected role. // We’re afraid he didn’t get any character role and just screams “Gyaaaa!” from the background mob.

Actually, this is a joke. Anyway, please look forward to it.

[Editor’s note: since Mr. Mizushima’s name does not appear in the cast credits for Be Forever, his hoped-for role apparently did not materialize. His other roles are listed here.]

A First in Anime History!

What is the Amazing Warp Dimension System?!

In Be Forever Yamato, a new system called Warp Dimension will be used for the first time in anime history. During the movie, a phenomenon will suddenly happen that is sure to make gasps break out in the audience!

What on Earth will actually happen is an absolute secret being kept from the public. Could Yamato leap off the screen…? Anyway, it will certainly bring enjoyment and super animation. 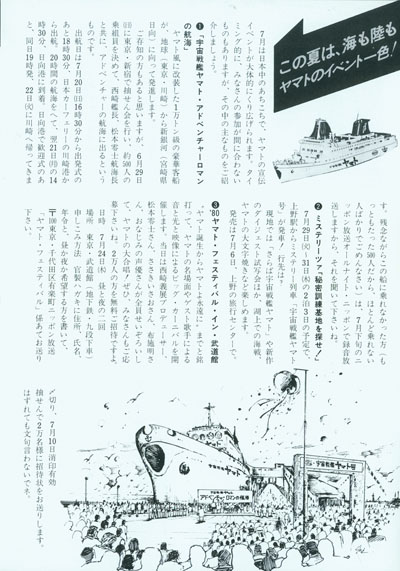 This Summer, Yamato Events Come to Both Land and Sea!

Promotional events in Japan for Yamato are being developed on many fronts for the month of July.

The timing of this publication means that some events will have already ended when you read this article, but we will introduce them regardless.

A 10,000 ton luxury passenger liner has been redecorated in the Yamato style to set course from Earth (Kawaski, Tokyo) to the Milky Way Galaxy (Hyuga in Miyazaki Prefecture). It is well known that a ticket raffle was held in Shinjuku, Tokyo on Sunday, June 29. About 500 crewmembers were chosen to go with Captain Yoshinobu Nishizaki and Chief Navigator Leiji Matsumoto.

The ship will set sail from the Kawasaki Port of Nippon Car Ferry on Sunday, July 20 at 18:30 after a departure ceremony at 16:30. After 20-hour voyage, it will arrive at Hyuga Port on Tuesday the 22nd and begin its return voyage for Kawasaki at 19:00 the same day.

Unfortunately, many people reading this will not be able to get on board (because only 500 people could be chosen), but a recording will be broadcast on All Night Nippon at the end of July. Please listen.

The mystery train “Space Battleship Yamato-Go” will depart from Ueno Station on July 29 for a three-day trip with a two-night stay!

There, you can watch Farewell to Yamato and a digest preview of the new film. You will also see a naval battle show and a Yamato Daimonji. [Translator’s note: this is the common term for a Japanese cultural festival in which bonfires are burnt in the shape of giant letters. In this case, it was probably the Japanese letters for “Yamato.”]

Tickets will be available starting July 6 at the Ueno Travel Center.

Titled Yamato from Birth to Be Forever, this event will be a huge carnival of light and sound with great scenes and guest stars. Producer Nishizaki, Leiji Matsumoto, Isao Sasaki, Akira Fuse, all the familiar voice actors, and a huge chorus will come together on that day!

By all means, everyone should apply for a ticket; 20,000 people will be admitted for free. The date will be Thursday, July 24 and there will be two performances. Apply by sending a postcard with your name, age, and preferred showtime, afternoon or evening.

Entries must be postmarked by July 10. 20,000 winners will be chosen by lottery and notified by mail. 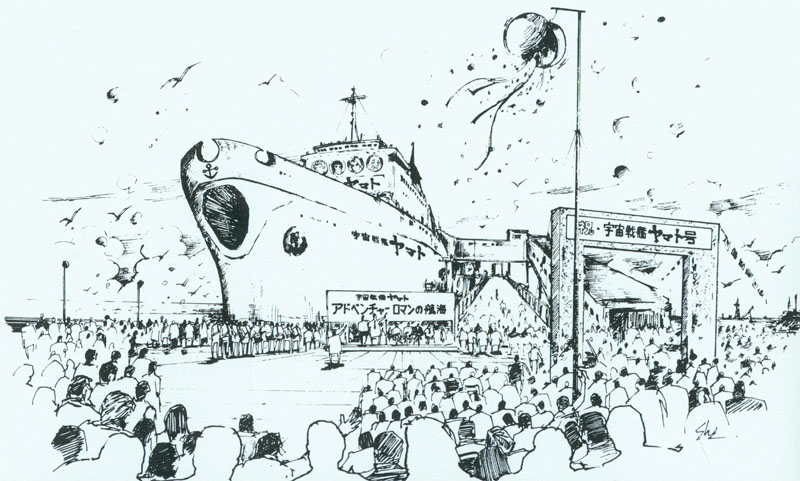