Three big Yamato events! We must exceed the previous film! 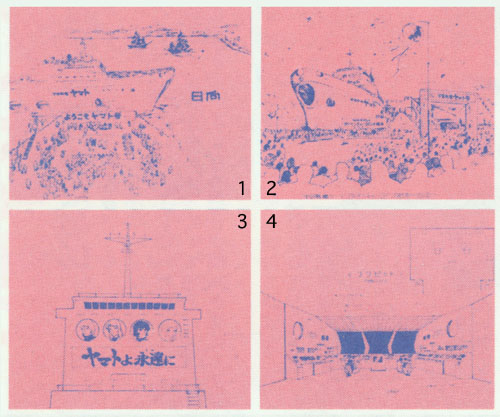 1. Concept art of the cruise setting off from Earth (Kawasaki Port)
2. The cruise arriving at the New Galaxy (Hyuga)
3. The front of the bridge. Each character image has a diameter of 8 meters.
4. The design for a “bridge” which will be built in the ship’s lounge.

[Translator’s note: Major Enterprise began its relationship with Yamato as the publicity company for the first movie in 1977.]

Interviewer: Supported by 2,500,000 moviegoers for the first film and 4,300,000 for the second, the third Yamato movie is on the way. As the publicity man, you are conscious of these numbers, aren’t you?

Tokuyama: Yes, I am. We must exceed the previous film in terms of the publicity activity as well.

Tokuyama: Though these events are basically meant to promote the third film, we want to return the profits we have made to the fans. For example, on the cruise event, though it actually costs 30,000 yen per person, we are only charging 3,000 yen. If we did it for free, the event may seem too casual, so we decided to charge 3,000 yen. The money will be donated to welfare activities or something like that.

Interviewer: The mystery train tour is the second promotion of its kind. The first was also done by your company for Galaxy Express 999.

Tokuyama: This will actually be bigger than we expected. Posters will be in stations and on the ceilings of trains for six days–4,800 trains in the Kanto region.

Interviewer: The third event, as well as the Warp Dimension technique, is still secret?

Tokuyama: Our strategy is to let people build their expectations. Knowing the trick makes the magic less interesting, and this is the same. The goal is to get as close to 4,300,000 moviegoers as possible, to measure up to the previous work.

[Translator’s note: the third event was the Festival in Budokan, covered here.]

This will be a big cruise event (July 20-22) from Kawasaki Port in Kanagawa (the Earth) to Hyuga (the New Galaxy). The ship is a 10,000 tonnage-class luxury passenger ship, redecorated to look like Yamato. An enjoyable 3-day trip with Yoshinobu Nishizaki, Leiji Matsumoto, Isao Sasaki, Yoko Asagami, Akira Kamiya, and more. Plenty of attractions, such as Yamato film screenings, photo-taking, autograph signings, treasure-hunting, and fireworks are planned.

After arriving at Hyuga, the passengers will be received by sailboats and helicopters. In addition, there is a chance to participate in sea rescue training. However, the lottery for joining the “crew” of this journey is already over.

On June 29, the lottery was held in front of Shinjuku Station in Tokyo, which was filled with over 10,000 people. The crowd went into an uproar whenever the winning numbers for groups of three were announced. It was as if the forthcoming summer of Yamato fever had already arrived.

When Animage announced this event in the spring, 1,000 letters of application were received within three days. The fan response was far beyond imagination.

The details are almost finalized. The performers will be Hiromi Iwasaki, Isao Sasaki, Mitsuko Horie, Kei Tomiyama [Kodai], Yoko Asagami [Yuki], Ichiro Nagai [Sanada], Akira Kamiya [Kato], Leiji Matsumoto, Toshio Masuda, Yoshinobu Nishizaki, Yu Aku, Yoko Yamaguchi, and so on. This festival also includes attractions such as scenes from Yamato and a song concert. Tickets to this event were sold out on July 10. The event day is July 24.

This is a mystery tour whose destination is unknown, titled “Three Days of Adventure and Exploration: Find Secret Training Base Icarus!” The event includes such attractions as a quiz to guess the destination, mountain and lakeside hiking, field athletics and cycling. It will be ideal for primary and junior high school students. However, the lottery to select the “crew” was completed on July 6. The event will be held July 29-31. 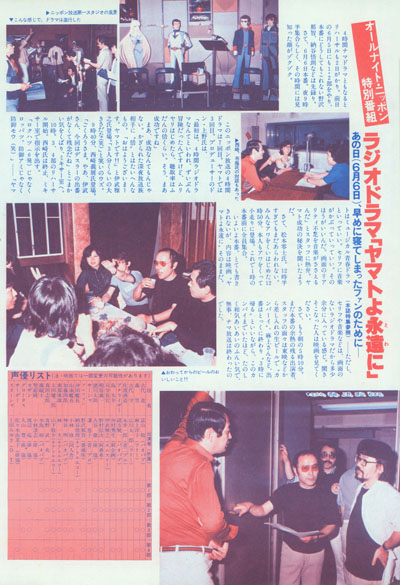 Two days of rehearsal were needed for the four-hour live drama. Rehearsal for the first and second parts was done the day before, June 5th. Actors Nachi Nozawa and Goro Naya, who would not be able to join in the live drama, did recordings on this day.

This was the seventh four-hour drama done by the Nippon Broadcasting System, and the third time for Yamato. Director Don Ueno said, “in the beginning, four-hour dramas were quite daunting, but when we forced ourselves to go through with it, the ratings doubled, so it was a success.”

But success in this case is relative, considering the limited audience for overnight broadcasting. “Good mooorning. It’s Yamato!!” announced Masato Ibu [Dessler], whose voice is three times louder than a regular person’s, and is always cause for laughter.

At 9:40, Yoshinobu Nishizaki arrived. “Many thanks for your help. Hi, Ibu-san, sorry for not giving you the role of Dessler this time.” With this showing of sympathy, Nishizaki left for the mixing room.

At 10:00, rehearsal began for the third and fourth parts. Afterward, Nishizaki gave direction from the mixing room. “You can describe Yamato as a musical drama for youth,” he said. “It’s OK to overlap the dialogue and the music. It’s better, in fact. The radio drama lacks the reality created by the picture, but the music will supplement it.” The secret of Yamato‘s success could often be found in the passion of his words.

By 12:30 AM, Leiji Matsumoto had not yet arrived. By 12:50 everyone began to fret, and he finally ran into the studio (in an equal fret). Everyone was in their place by the 1AM start time.

Overall, the content of the radio drama was the same as the film, but with expanded dialogue and music to replace the animated picture.

The program ended at 5 AM, and at 5: 10 the staff and performers toasted the occasion with beer sent from Toei and other places. Because Yoko Asagami’s role in the production finished earlier than the others, she insisted she would head for home by 3 AM, but she was still there for the toast, and the live broadcast concluded happily for everyone.

Upper left: Everyone is relieved at the timely arrival of Leiji Matsumoto. Upper right: Beer tastes great after the performance!!

Special thanks to Michiko Ito for translation assistance