An Interview with Actor Michael Bertolini

As longtime Star Blazers fans know, it’s not easy to find the voice actors who brought the characters to life for English-speaking viewers. The reason is a simple one; since the series was not recorded under the auspice of an actor’s union, record-keeping was not enforced and names didn’t get into the end credits. Therefore, the fact that a handful of the actors have been positively identified in the intervening decades is pretty darn amazing.

The first to surface after years of anonymity was Amy Howard-Wilson (Nova). She, in turn, worked three miracles in a row when she found Ken Meseroll (Wildstar), Eddie Allen (Desslok) and Tom Tweedy (Venture). And now she’s done it again! It is our supreme pleasure to welcome back into the Star Blazers pantheon Michael Bertolini, who won all of our hearts as Communications Officer Homer Glitchman!

The following interview was conducted by e-mail shortly after Michael first reconnected with his fans via Facebook in August, 2011.

Homer seems to have an upper East Coast lilt to his voice. Where do you hail from?

I hail from Long Island, NY.

I think it was just something that I was born with! I remember my elementary school teachers being amazed at my performances when we would read plays in class, and this was before I had any acting training at all. One teacher was so impressed–I think I was actually doing a character with a Swedish accent–that she brought me down to the principal so he could hear me, too.

It grew organically. I wanted to do it all!

What sort of professional experience did you have before you were called up for Star Blazers?

At the time, I was attending Hofstra University on a full tuition acting scholarship. Voicing Homer was one of my first professional gigs!

Some of the other Star Blazers voice actors were chosen from the ranks of the Weist-Barron acting school in New York City. Was that also the case with you?

No. Casting agent Kit Carter called me in to audition.

How did she find you?

If I remember correctly, a friend of mine introduced me to her. But I honestly don’t recall. 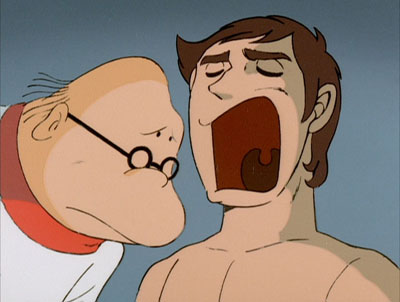 I think I originally read for Eager. But I’m glad I got Homer! Even though it was a secondary role, he was a complex character whose personality grew and changed as the series progressed.

Not really. They told me it was the top rated show in Japan at one time.

Oh yes. Many people told me that I should be doing voice over work. And I’ve always been interested in the sci-fi genre.

Yes. It was small and for the most part we came in and laid down our tracks and left, except for the times they needed to do group scenes. Then we’d all pile in around the mic and record the scene. But I still thought it was a very cool experience, small studio or not!

Who did you take direction from when you were in the studio? We know the name Tom Griffin (of Griffin-Bacal Advertising) as the head writer of the scripts. Do you remember if he was the voice director as well?

I remember there was a woman who directed some of the episodes. She also voiced my mom in my breakdown episode! (Series 1, Episode 19)

Of course, you are best known for Homer, but you also did some other voices in Star Blazers. Which characters were those?

Yes I did. I don’t remember how many other characters I played, but according to Star Blazers fan Arthur W. Painter, I voiced General Stone as well, and the space marine who was harassing Nova and Conroy in the mess hall. “Ahh, forget it, Mac! We don’t know about manners and they don’t know about fightin’!” I also played assorted villains, and whoever they needed at the time, as did most of the other cast members.

Homer is one of the more emotional characters, given to the occasional outburst and some friction with other crewmembers. There must have been a temptation to go over the top in some scenes (which happened all too often in TV cartoons of the day), but the acting is remarkably realistic even now. What do you remember about that process?

You know, what I tried to do was just play it as real as possible. I never thought of it as cartoon acting. Homer was a real character to me, and I always treated him as such. I remember getting the script for Homer’s breakdown the day I walked into the studio to record the episode. There wasn’t any time to really work on it! I would have loved to have had a few days to prepare for it, but that’s the way they ran things. Luckily, I knew who Homer was at this point; I was comfortable in his skin. So all I had to do was make sure I was in sync and go for the ride, so to speak!

The original production consisted of two separate stories of 26 episodes apiece. In Japan, they were made five years apart. Do you recall a break between recording series 1 and series 2, or was it continuous?

I think it was continuous.

I saw it when it came out on TV, just like everyone else!

What thoughts go through your mind when you hear Homer in Star Blazers these days?

Sometimes when I watch an episode I don’t even realize that it’s me speaking! He’s just this fascinating character on this great show. At other times, I hear things that I wish I could redo! But most actors are like that, I think!

How did your acting career progress after Star Blazers?

I finished college and received a BFA degree in Theatre Arts. Since then, I’ve been in and out of the business…not a great way to build a career! But mostly, I guess you could say I’ve been a journeyman actor, primarily working with a variety of different theatre companies.

What are some of your most prominent credits? Where could fans look for you on film or TV?

Recently, I played serial killer Colin Raimes in the pilot episode of Life on Mars (ABC). Oh, I also worked as a muppeteer! That was pretty cool. But most of my work has been done in the theatre. I am currently trying to do more TV and film acting.

Do you do much traveling for work, or is it all concentrated in New York?

Lately, most of my work is concentrated in New York.

What happens a lot is that I’ll put Star Blazers down in my bio for a show I’m doing, and someone in the cast and/or audience will read it and say something like, “You were in that! I loved that show!”

Have you done other voice acting, or are you still pursuing it?

I have done voiceovers, product tutorials, etc. I really enjoy it and it is something that I am pursuing. 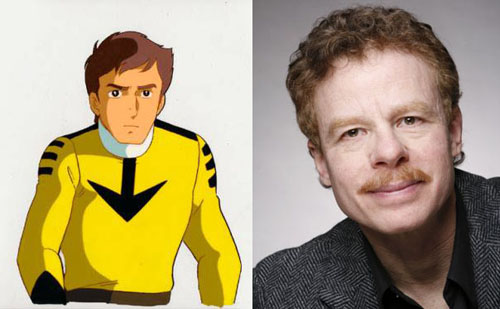 The Time Machine Question: You have a time machine that runs on quarters, and you have three quarters.

Wow–this is tough!!! There are so many places and time periods I’d like to visit! OK, the first thing that came to mind is to visit the time when Jesus was walking the Earth, so we’ll go with that.

It would be in the future, to see how we humans are making out! I know–I’ll go visit my buddy Homer and the rest of the Star Blazers crew on their journey to Iscandar!

As of October 2011, Michael is in rehearsals for The Assassins at the Smithtown Performing Arts Center in Smithtown, New York. Visit their website here for more information.