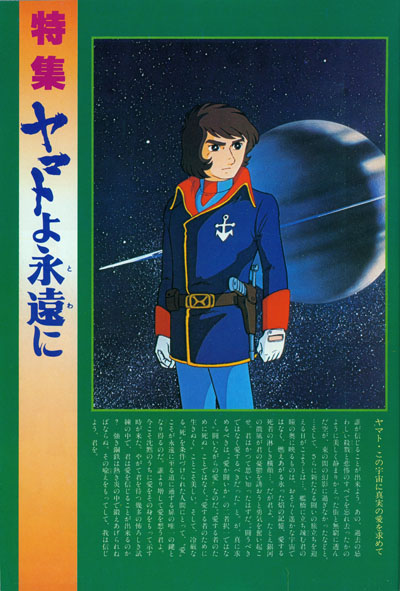 Who can believe it was just a brief illusion, that calm, beautiful city and crystal clear sky above leading to infinity, as if the past holocaust and all the miserable cruelty were forgotten? And how can it be accepted that the day of departure for a new battle will come…

What can be seen deep in your eyes while standing on the bridge is possibly not the infinite space beyond, but the frozen image of flames and the lone outline of the beloved dead…

But you encourage yourself despite a galactic blow that tempts melancholy.

You once knew well ‘not to fight but to love.’ What to pursue is not the choice of either love or war but love in war. It is truly beautiful not to die for the beloved but to survive for the beloved. And for the human beings destined to die unavoidably, only love can work as a key to infinity.

You think of love more than anyone else, it is time to show your love by your actions without a word. Can you yet believe in your love, even in the midst of the horrible trials to come?

Sturdy iron has to be tempered in the burning fire. By this example, I trust you completely.

Be Forever Yamato, the third feature film for Space Battleship Yamato, is being released at last. Two years after Farewell to Yamato, Yamato launches to fight a new battle in response to the ardent wish of 5 million fans. Yoshinobu Nishizaki and Leiji Matsumoto, along with the cooperation of many new staff members, are working toward the public release.

Let’s think about and discuss the movie that even non-fans cannot help but anticipate. We think we’ll enjoy the movie many times. 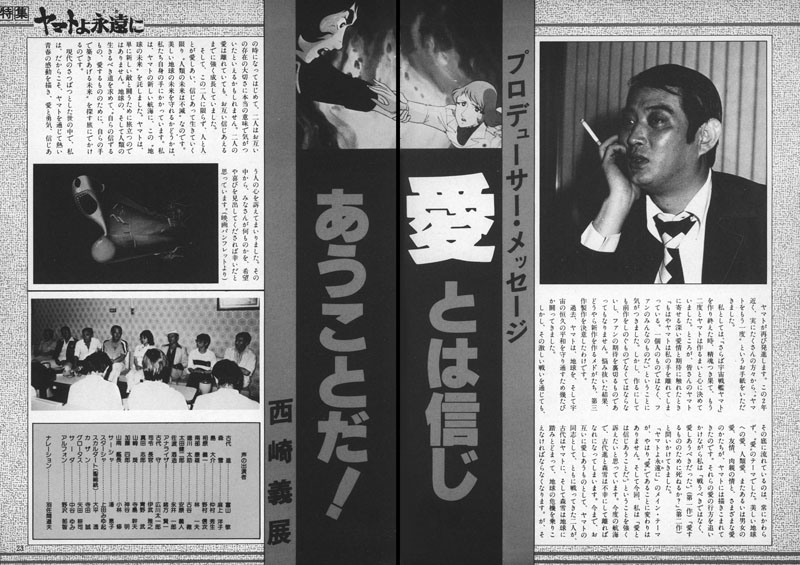 To Love is to Believe!

Over the last two years I received many letters from people about Yamato. When I finished making Farewell to Yamato I had used up all my energy and decided not to make Yamato again. However, when everyone expressed to me their love and hope that Yamato would return, I realized that “Yamato has already left my hands. It no longer belongs to any individual, it now belongs to everyone. That is Yamato.”

However, if I were to make it again, it must exceed the previous work, or it would betray the expectation of the fans. The prospect of doing another one was driven by that concern, and that’s how I determined to make it.

In the past, Yamato and Earth fought many times to preserve the permanent peace of space. But flowing underneath all that intense fighting, the theme of “love” was always present. Love for the beautiful Earth, love of humanity, friendship, love between men and women, the love of family, and various other forms of love have all been presented in Yamato. While searching for the meaning of love, we said “we should not have fought them, we should have shown love” (the first work) and asked “could you die for someone you love?” (the second work).

That will not change in Be Forever Yamato, since the main theme is “love,” after all. This time we say, “to love is to believe in each other.” I think that has a strong appeal.

In the next voyage, Kodai and Yuki will become separated and be distraught. Until now, they have loved each other as comrades on Yamato. These two have fought together. But now Kodai will go to Yamato and Yuki must remain to overcome the crisis on Earth. Only when that time comes do they understand the true meaning of how important they are to each other.

Even when they are far away, their love has grown strong enough for them to believe in each other. And it isn’t limited to these two; as long as a person loves and believes in another person, “the future of humanity is immortal.”

The future of this beautiful Earth is in our own hands. The “future of the Earth” is entrusted to Yamato on this new journey. Yamato does not launch just to fight a new enemy. They start out their voyage to seek the future of Earth, the path of virtue a human being should follow, and for “the future made by our own hand, for the people we love.”

People in the modern world have lost empathy, and that’s why I have portrayed the passion of youth, advocated love and courage, and appealed to the importance of trust in one another, through Yamato. I would be very pleased if you find some hope or delight from it.

(from the movie press sheet)