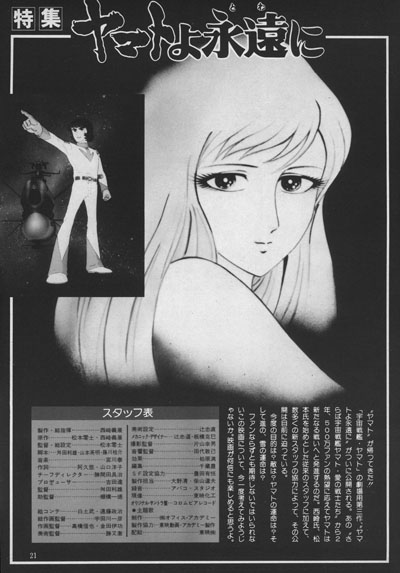 On the Eve of Be Forever, I Love Yamato

How do you perceive this one word? Although it is the name of a boat and also a fictitious ship, isn’t “something” conveyed to you when you hear it? Certainly, it must be transmitted. Even if everyone sees Yamato differently, doesn’t it connect all the people who know Yamato?

The world of Yamato isn’t explained here for those who aren’t already familiar with it. This world was built up by many different works: two feature films (Space Battleship Yamato and Farewell to Yamato, two TV series (Yamato and Yamato 2) and three telefeatures (Space Battleship Yamato and Yamato 2 edited for TV, and The New Voyage). The cumulative result surpasses other mediocre titles and shows you that special “something” which cannot be expressed with any term other than “Yamato.”

I am not talking about the theme of Yamato here. More apparent and obvious, it is a so-called impression. And Yamato lacks an essential body without it. That’s the type of thing I’m going to talk about here.

In other words, there is certainly something that never can be understood by people who wonder why others are so crazy about this title.

Now people take it for granted and use the word “anime.” But thinking back reminds of us the situation just five or ten years ago when we called them kids’ cartoon movies and TV cartoons. Nowadays only stubborn old-timers thoughtlessly use those terms. However, when a name changes, the thing it refers to changes along with it, from something unusual to something common.

In short, it becomes no longer strange to talk about it. For example, how many anime magazines are there now, for which OUT was the pioneer? Anime fan groups? And the amount of anime? What led this situation?

The cause cannot be just one person or one title. Think in reverse; think of something that must have lead this situation, without which things could not go this way.

When I think about it, three people and two works rise to the top: Osamu Tezuka’s Mighty Atom [Astro Boy] and Yoshinobu Nishizaki & Leiji Matsumoto’s Space Battleship Yamato. It is no longer necessary to go into detail about Mr. Tezuka. If Mushi Pro [his production studio] did not exist, of course everything would have been literally unpredictable.

But if Yamato did not exist? I can answer that with considerable accuracy.

Imagine that there was no Yamato boom. Naturally, neither Galaxy Express 999 nor Toward the Terra would have been made afterward. In a case that is more familiar to myself, I doubt anime magazines would exist, either. In other words, Yamato has a huge presence. When one speaks of “the present state of anime,” Yamato is in the center of it as a matter of course. If not for Yamato, it would not have happened at all.

Why did it become so? It is difficult to say. Yamato is interesting, but that in and of itself is not the reason.

There needed to be someone who took an interest when a work became popular, or much earlier when its production began. Only the writer thinks and affirms that his or her work is interesting and entertaining. If other collaborators such as the director or editor do not agree, the work cannot be done satisfactorily. The point is, how it is interesting, and what is interesting about it?

Another big reason is that it is supported by a theme. As Yoshinobu Nishizaki always emphasizes, you cannot talk about Yamato without talking about “love.” However, let’s deal with that later since there are other pages devoted to it. 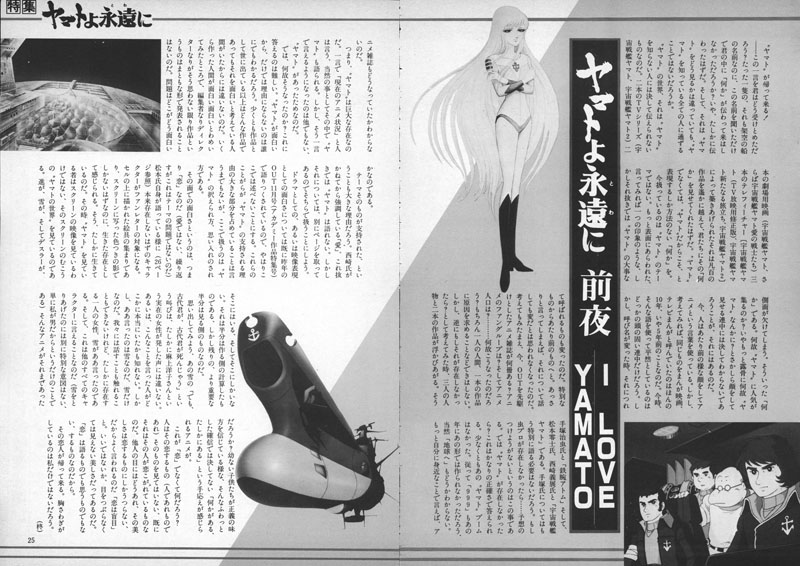 As for the story or the fun of the visuals, I won’t speak about that here because it was already explored in depth in the November issue of OUT (in a special feature on Academy productions). Although it is obvious that these things are a big part of Yamato‘s popularity, I am speaking now about how Yamato is perceived and the response to it.

From this point of view, “interesting” means first love. Not true love; as I said, this is not about the theme. As Leiji Matsumoto says himself (see the interview), an imaginary, nonexistent character becomes the object of a fan letter. Though it is a gathering of paint applied to a cel and merely a color image appearing on a screen, it still feels like a living presence. Yes, to be sure, it is alive.

The person who watches Yamato at that moment isn’t just seeing a picture on a screen, they see the “world of Yamato” on the other side of that screen. Kodai, Yuki, Dessler, and others exist there. Half of it is the result of calculation, but there is another half, the more important half seen by the viewer.

I recall the words spoken by Yuki: “But Kodai-kun, Kodai-kun is going to die!”

Certainly, that was the voice of a real woman, Ms. Yoko Asagami. Or maybe somebody said so somewhere. However, it was Yuki–and only Yuki–who said it.

Although we can’t touch her or even speak to her, certainly there is a woman there who exists, named Yuki, who said it. And the same can be said for all the other characters. (There is no special reason that I intentionally brought up Yuki, it’s enough to say that I just did it because I’m a man.)

Was there ever such an anime before? It was unprecedented for young kids to believe in a hero of justice. There is certainly something specific with this new anime. What is this, if not “love”?

When someone is crazy about something, they do not see the object itself, since it has become the subject of adoration. To other eyes it may not look the same. Its beauty can be seen only by the one who loves it. Therefore, as is so often said, “love is blind.”

That is fine. There is a kind of beauty seen only when you close your eyes. First love isn’t about speaking or thinking, only about feeling.

The lover returns. It will not only be me who feels it.