Part of Be Forever Yamato asks about the original voyage of Yamato.

That is the framework of the story this time. 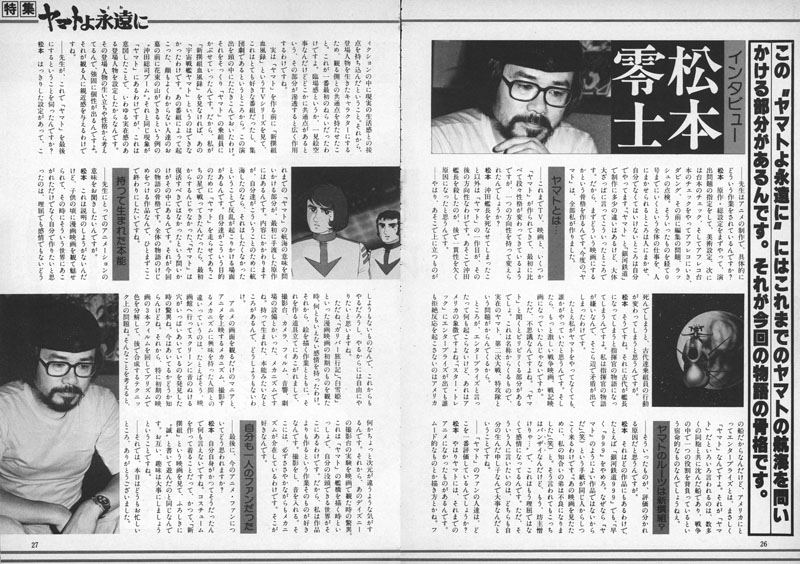 Interviewer: What specific activity do you personally carry out in the production of anime?

Matsumoto: First, to create the overall setting, I specify the production demands and art designs. Next, I check the script in preparation for recording. Then I oversee the dubbing, the editing before that, and I check the rushes. Thus, I go through the whole work doing a number of things. Some of it is left to others and some must be done by myself.

Though there are some differences in production between Yamato and Galaxy Express, they are basically the same. I create a framework for what kind of movie I want to make. As for this next Yamato, I did it all.

Interviewer: Looking back over the many Yamato movies and TV episodes, it seems that some characters have changed compared to the first series. Were these changes made intentionally?

Matsumoto: With the exception of allowing Captain Okita to die, all other changes in Yamato have been intentional. In view of other things that came later, I think the death of Okita lacks consistency now.

Interviewer: When the one standing at the top dies, I would think that the behavior of Kodai and the crew would change.

Matsumoto: Yes. If Kodai becomes the leader, it is the story of the commander. I dislike stories of commanders, and some inconsistency has come out of me in that area. But I think that someone else would have done it, even if I wasn’t on Yamato. Don’t you think it has become a more intense war story and record-of-war story?

But it’s mysterious. When you hear “Yamato,” your nerves tingle and you listen closer. This comes from the name of the real Yamato, which gets tangled up with World War II and the problem of the Kamikaze attack corps. However, you don’t get the same feeling from “Enterprise,” even though that is a symbol of America. Although it’s an American warship, nobody reacts negatively when the Enterprise appears in Star Trek. The Enterprise is certainly America’s Yamato.

“Yamato” is the ship that sank with many of our countrymen on board, and it was a fateful thing for it to be charged with such an important role in the war.

Are Yamato‘s Roots in the Shinsengumi?

Interviewer: Such a thing causes opinions to be divided.

Matsumoto: That’s the case with any work. Galaxy Express 999 for example. I received persistent letters from one person saying, “Stop making Galaxy Express, because it’s not as good as Yamato!” (Laughter) And added, “When I saw that, I stopped following it.”

I had nothing to do with it anyway. Once someone hates something there is no logic to it, just hatred. Yet I want to point out that both titles are my children and equally important.

Interviewer: Which part do you think Yamato fans appreciated most?

Matsumoto: There are some things that were never done in anime before Yamato, like the mood and the design. It brought an impression of reality in close contact with fiction. To bring the characters to life, they had to have something in common with the audience. That was our most important goal at first.

Whether or not we can call it realism, there had to be some common elements in it even though it was a fantasy tale, so we worked hard to penetrate those areas. Actually, before working on Yamato I watched an acclaimed ensemble TV drama series called The Blood Record of the Shinsengumi. It had a great influence on me, and the creation of the Yamato crew. Therefore, Space Battleship Yamato would not have been made if I hadn’t watched Blood Record of the Shinsengumi. It was generated by that program.

For example, the “Souji Okita Boom,” where mountains of bouquets are placed on peoples’ graves even if their faces are not well-known. The same phenomenon is in Yamato, since I set out to create characters that seem real. Since we thought about their personal history and character traits, their individuality came out strongly and created a sense of intimacy for the audience.

Interviewer: We’ve heard that you decided this is the final Yamato. Is it true?

Matsumoto: There is a clear setup, and part of it asks about the meaning of the original voyage of Yamato. There is a scene where the crew is regretful about the unintended outcome of the voyage, and there could be a revolt against it. If we took many voyages and fought many battles only to have that particular outcome, we should not have done it at all.

Among the issues, there is the distinct question of whether or not Yamato should have been revived. It is the framework of the story this time. I tentatively want it to end here, because it connects all the lines of the overall story.

The Instinct That I Was Born With

Interviewer: I’d like to hear about what animation means to you.

Matsumoto: There is no other explanation for it; I watched animated films as a child and was captivated by them. I not only yearned after them then, I wished to make my own. It was a hopeless feeling with no logic behind it, but I wanted to do it freely from that time on. When I watched early animated films such as Gulliver’s Travels or Snow White, they filled me with an indescribable emotion.

I was attracted by the tools used to make it: the pictures, the paint, and mechanisms such as the camera, film, sound, and theater equipment. It is a kind of natural born instinct and unavoidable in a sense.

The difference between a maniac fan audience just satisfied with seeing pictures, and another kind of maniac who has great interest in the mechanism for projection and photography is this: if you notice the tiny holes on the movie theater screen and you feel wonder and excitement, you are the latter. I don’t know if modern theater screens still have those holes, though. [Editor’s note: at the time of this article, the word “maniac” was used as “otaku” is today.]

Also, the wonder of the technique of three film rolls simultaneously splitting the color through a prism and to make a color film in the early age of movies.

Thinking about these differences in interest, I notice the hand-drawn lines and the levels or dimensions. Being excited by watching Disney’s experiments in multi-plane photography is very similar to drawing Yamato‘s bridge. Both are worlds I can really put myself into.

So I love the process of making animation rather than being in the audience of the finished film. Photography, dubbing, etc.; each process includes some kind of mechanism, more or less. I like it very much.

I Myself am also a Fan

Interviewer: Finally, what do you think about anime fans these days?

Matsumoto: I myself used to be that way once, so I have nothing to say. Wearing a homemade costume is actually not new since my generation used to play with Furoshiki wrapping cloth with the Kanji for ‘Makoto’ written on it after seeing the movie Shin Sen Gumi.

Let’s cherish each others’ hobbies.

Interviewer: This is a busy day for you, so thank you very much!

Editor’s note: The Shinsengumi [Newly Selected Corps], mentioned twice in this interview, were a special police force in late 19th century Japan and had a major influence on Space Battleship Yamato. Read more about that influence here.