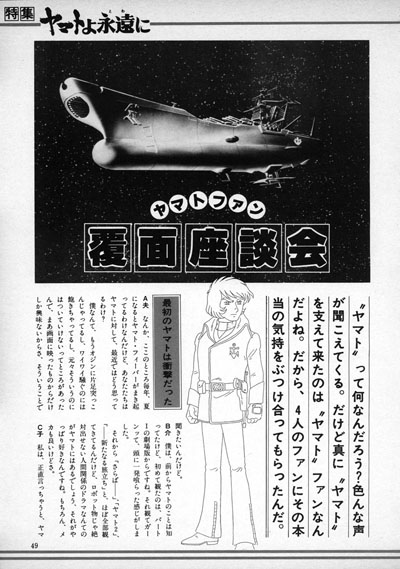 What will Yamato be? Various voices are heard. However, they are Yamato fans that have truly supported Yamato. Therefore, we brought four fans together to share their real feelings.

The first Yamato was a shock

Mr. A (male): “Yamato Fever” has arisen every summer for several years. What do you think about Yamato these days? I’m getting old, too bored to kick up a fuss, and I don’t like all that stuff. I’m not interested in anything off the screen. So, I’d like to ask you about it.

Mr. B (male): Though I knew about Yamato for some time, the feature film version of part 1 was the first I saw. It felt like a hammer-blow to the head when I saw it. Then I watched everything; Farewell, Yamato 2, The New Voyage…after all, I like the drama of Yamato‘s human relationships, which could never be replaced by a robot-thing. Of course, the mecha is good, too.

Ms. C (female): To tell the truth, I am sick of Yamato. I’ve lost interest in it. I will say that I saw Farewell to Yamato five times. Thus, I feel like Yamato is over for me. I didn’t watch much of Yamato 2 or The New Voyage.

Ms. C: No, when I watch I think of it as a different Yamato.

Mr. A: A different Yamato?

Ms. C: At the end of Farewell, I accepted that Sanada, Yuki, and even Kodai had died, and Shima and others were departed. It made me feel, say, like they became people who live in my heart, only in my heart. That’s how I felt. Therefore, that was the real Kodai, and there is a different Kodai afterward.

Mr. D: Well, You see, Mr. B just said Yamato has a human relationship drama that cannot be expressed by robot anime, and he likes it. I don’t necessarily think that way, since I think the human relationships depicted in Gundam and Ideon were far better than Yamato. It may be personal taste after all, but I don’t expect anything but mecha from Yamato. I’d rather watch Ideon in my room if I have to stand in line for two or three all-nighters to watch Be Forever Yamato.

Mr. B: Speaking for myself, I’d go and stay up all night.

Mr. A: As I thought, people are losing enthusiasm when compared to two years ago. In those days, everybody over-reacted to everything about Yamato. But I think the present state is better. I mean, they can correctly understand the drama and many aspects of Yamato with a cool head. By the way, Mr. D said the human relationship drama in Gundam and Ideon are better than Yamato. What do you think of his opinion, Mr. B?

Mr. B: Well, I know I’m the one who started the human relationship argument, but I think Yamato and Gundam or Ideon are totally different. Typical giant robot anime are stories about defending Earth from an enemy, you know. Yamato is basically same, but Gundam and Ideon are not stories about defending against an enemy. So with this in mind, I don’t think we should compare Gundam and Ideon with Yamato on the same basis.

Ms. C: I think so, too. I’m also one of the Gundam fanatics, but the impression I received from Yamato Series 1 and from Farewell was completely different than the impression from Gundam. Yamato had the feeling that we have to defend Earth even at the cost of our lives. But Gundam doesn’t have such a feeling at all, does it? I think the theme of Gundam is how you survive. Although we’re in a terrible situation now, if we can make it through the war then a peaceful, rosy life is waiting in the future. I can’t explain it well, but comparing them on the same grounds is troublesome.

Weighty Mecha That Tops All Others!

Mr. A: By the way, Yamato is substantially remodeled in Be Forever, but by contrast the design has changed only a little, hasn’t it? I’d like to hear about that and other mecha.

Mr. B: I miss the old designs. It may sounds like Ms. C’s feeling but you know, they changed my favorite engine room. When I think about it, I feel it has become a different Yamato, like she says.

Mr. D: I think it’s natural that it would change. Yamato could not overcome Goruba in The New Voyage, so I think it would be strange not to remodel it afterward.

Ms. C: It may be so. Well, I think of it as a different Yamato, so I don’t care which way it goes, but I agree on it getting improvement. Apart from that, did the “pennant bomb” used by the Mazone in Captain Harlock influence the Hyperon bomb, which only kills humans and leaves buildings and machinery intact? What kind of thing is that?

Mr. D: That thing? Isn’t it basically a neutron bomb?

Mr. A: I guess so. Some of the details are different, but aren’t the rough principles about the same as a neutron bomb?

Mr. D: Speaking of mecha, I think Yamato is taking two steps forward from other anime, not just one. Considering the Goruba from the telefeature and the new interiors of Yamato, they’re drawn surprisingly carefully, and above all the impression of weight is different. When comparing the weight-expression of mecha, I hate to admit this but Gundam can’t beat Yamato. Even Ideon can’t win except for the buried Solo-Ship.

Ms. C: Speaking of which, I wonder if Studio Nue is involved in the mecha design?

Mr. D: No, Nue wasn’t involved after Farewell. Be Forever is designed by Katsumi Itabashi and Tsuji Tadanao.

Mr. D: Yes, but I’d like to add that in design, isn’t texture as important as weight? I think it is. 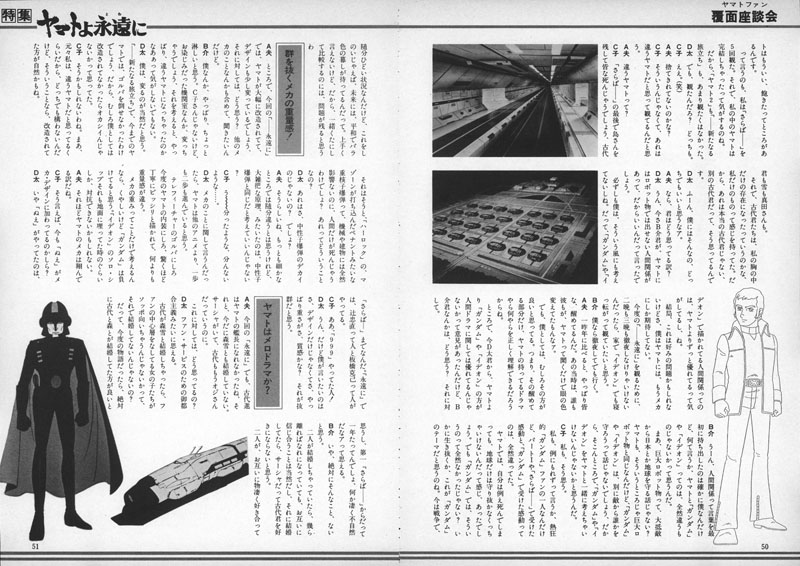 Mr. A: This time in Be Forever Yamato, not only does Kodai not become a captain again, he is also still not married to Yuki. Kodai has Sasha, it makes him an “oji-san” [Translator’s note: uncool old guy.] What do you think about this?

Mr. D: It seems like opportunism for fan service. If Kodai marries Yuki, wouldn’t it anger all the fangirls who don’t want him to be married? In the next story, I think Kodai and Yuki had absolutely better get married. It’s one year after Farewell, you know. I think that’s unnatural.

Mr. B: I definitely don’t think that. If they are married, then keeping a long-distance relationship would be a matter of course, no matter how long they’re separated. And if they were married, Sasha wouldn’t fall in love with Kodai. I think that if two people are just right for each other but not married yet, they would mutually trust each other from the bottom of their hearts if they became separated, and their strong love would not be defeated by any obstacle.

Ms. C: But this time it seems like melodrama.

Mr. D: Kodai and Yuki both have separate affairs, but nonetheless each say “I believe in you!” (Laughter)

Mr. A: Although Gundam seemed like a fairly dry work, Yamato was quite sentimental right from the beginning. After all, if they keep depicting many forms of love, it’s natural they would take a form like this, but I have to say leaving the pair unmarried is too tenacious. But since Producer Nishizaki seems to be enamored with the spirit of naniwa-bushi [obligation and humanity], it may be unavoidable. In the end, if it turns out to be a work of “melodrama,” it’s still a good thing if it touches your heart. To conclude, we viewers can say we like or dislike such pattern, but we can’t say it’s good or bad.

Ms. C: I think so, too. Because if they make new stories that deny my images of Yamato on a whim, I’m afraid my long-cherished devotion is also denied.

Mr. A: Hmm, The fact that viewers feel such devotion is a proof of greatness. But we cannot make Yamato after all, and for that matter, we should not make it.

For example, Star Trek will premiere soon. Though this movie was a ten-year-long dream for fans of the series, who are known as Trekkies, SF author and Star Trek screenwriter Harlan Ellison watched the movie, and he said the biggest drawback is that it doesn’t go beyond the image of the series. The work is not a “movie,” but just an expanded version of the TV series, like a telefeature, he said. Well, Harlan Ellison is famous for his sharp tongue, bit I don’t think Star Trek is low-grade work, and I think that is also true of Yamato.

Of course, it’s not only Yamato. It’s same for any story. I mean, the work belongs to its creator. We have to let them create their works as they want. And we viewers critique their finished work. If not, any work will have problems as it expands, because restrictions will increase and the quality will gradually deteriorate.

Ah, the conversation has become a bit sidetracked. We’re almost out of time, so everyone please say a final word about Be Forever Yamato.

Mr. B: I am hopeful. I believe they’ll give us bigger impact than ending of Farewell. I’m really looking forward to seeing the Warp Dimension system.

Ms. C: I can’t say anything until I watch it. I don’t expect the greatness of Farewell, but it could give me a greater impression.

Mr. D: What should I say? I’ve said lots of negative comments today, but it’s true I’m anticipating it. I’m looking forward to lots of mecha and battle scenes.

Editor: Then thank you all very much for today. 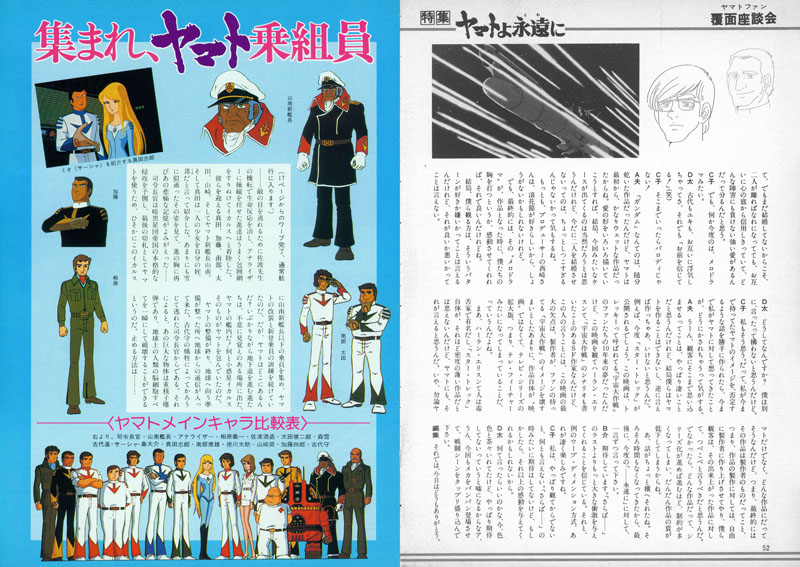