Be Forever Yamato, The best picture with best voice actors 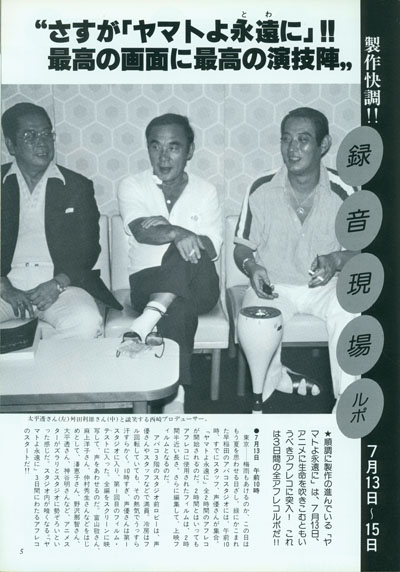 July 13-15: Production of Be Forever Yamato proceeded smoothly on July 13, with a rush of voice recording that breathed life into the anime! This is a report on 3 days of recording!!

Tokyo–rainy season or not, this day reminds me of summer sunshine.

The staff and voice actors have already gathered at Avaco Studio, surrounded by the green of Waseda, at 10 am. A 2-hour recording session has begun for Be Forever Yamato. Although it is two hours, the film used in the session is nearly two and a half hours long. After further editing, it will become the final screening film.

The lobby outside the studio on on the third floor of Avaco is packed with voice actors and staff. Even with the air conditioner at full power, they break into a faint sweat of excitement.

Just after 10:00, the actors enter the Studio 1 for the first film test. The entire film is projected onto the screen and the voices are united.

The test finally ends. I asked the actors who came out of the studio into the lobby, what was the movie like?

Kei Tomiyama: It is very good. After all, it is the third work and it’s very different!

The letters received by the fan club editorial department are filled with expectations and ask an overwhelming number of questions about the film. Apart from Mr. Tomiyama, looking around the lobby, there are Producer Nishizaki and Hiroshi Miyagawa. Atsumi Tashiro, Kazunori Tanahashi and main staff all look busy at their tables.

Lunch is distributed, and some people are preoccupied. Hiroshi Miyagawa stares at a sheet of music score. He said he worked all night and examined the climax music throughout.

Today the film is projected in ten minute segments and the lines are recorded.

The performers and staff gathered at Avaco again today at 10 am. Even those who stayed here until late last night look cheerful. However, some are not here today because they are not needed. Akira Kamiya and Koji Totani are not here.

Speaking of which, yesterday Mr. Kamiya said: “I have the role of Kato’s younger brother, but there are fewer lines than I thought. After all, the older brother is better.” (Laughs)

The film is reportedly in a rough state, but the finished animation is almost done thanks to the persistent staff at Toei Studio. Yamato is more impressive than ever, according to the statement yesterday from Mr. Tomiyama. Also, the comments are positive among the other voice actors.

Recording is almost finished. The recording that began the day before yesterday and continued from this morning has reached the final climax.

Keiko Han came out to the lobby during a break for another repeated test. How is the story?

Han: It’s fun to watch. (Laughs) But I was in tears over the last scene during the recording. It is very moving. It’s an anime I want you to see by all means.

A performer cries involuntarily–that’s the kind of ending that has been prepared.

There’s a door between this lobby and the studio where I think the scenes are projected from. Instead of a fan club editor, I feel like a fan and I want to look inside. As I sit in the lobby with such thoughts, the studio’s “recording” lamp goes out.

As expected, Kei Tomiyama and Yoko Asagami emerge with expressions of relief. Now, life has been blown into Yamato!! 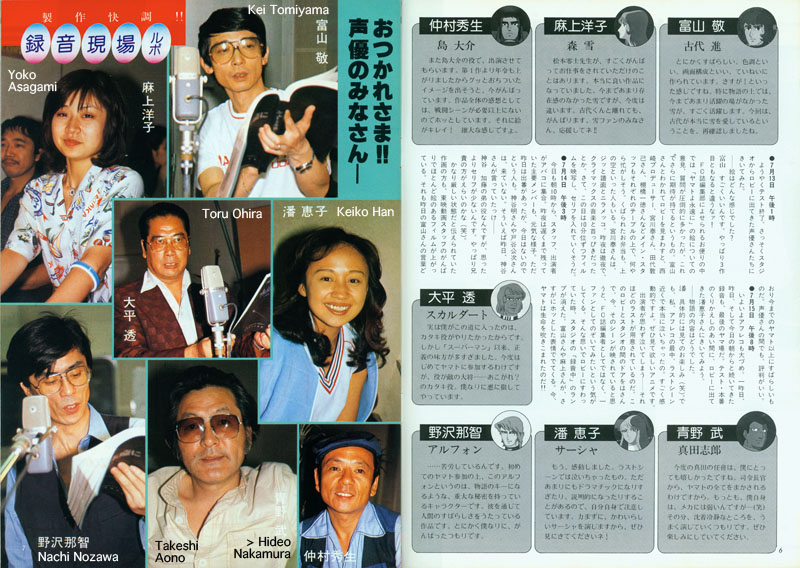 It is wonderful. The movie was made with care, great color and structure. Truly! I really feel that way. Especially Yuki, who used to be not that active before, is now at her most active ever. This time, I can reconfirm that Kodai really does love Yuki.

Leiji Matsumoto has done his very best with a very difficult job. It was really good work. Yuki didn’t have much presence in the last work, but it is different this time. Even apart from Kodai, I do my best. All the Yuki fans, show your support!!

Once more, I appear in the role of Shima Daisuke. He is much older now than the first film so I put effort into making him more calm. As for my thoughts on the overall film, I’m relieved that there are no more battle scenes than necessary. And such beautiful pictures! It is a magnificent feeling.

The mission of Sanada was a joy even for me, since the EDF Commander [Todo] leaves everything about Yamato to Sanada. As a matter of fact, I myself am not good with mechanisms at all, though. (Laughs) Instead, I will maintain his always calm and steady character so you can look forward to it!

I was already impressed. The last scene made me cry. So I made it clear with myself that I should not be too dramatic or too wordy. I was able to play the pretty Sasha effortlessly, so please come and see it!

I had a hard time. This was my first participation in Yamato, performing Alphon. He’s the key to the story, a character with an important secret. This work sings the splendor of human beings through him. Anyway, I think I did my best.

The reason I took this role is that I wanted to be a villain. However, there were too many allies of justice and “Superman.” This is my first Yamato involvement and my role is the enemy boss. (Is that my dream role?) So I stay tuned in anger.