Be Forever Yamato is about the Beauty of Life 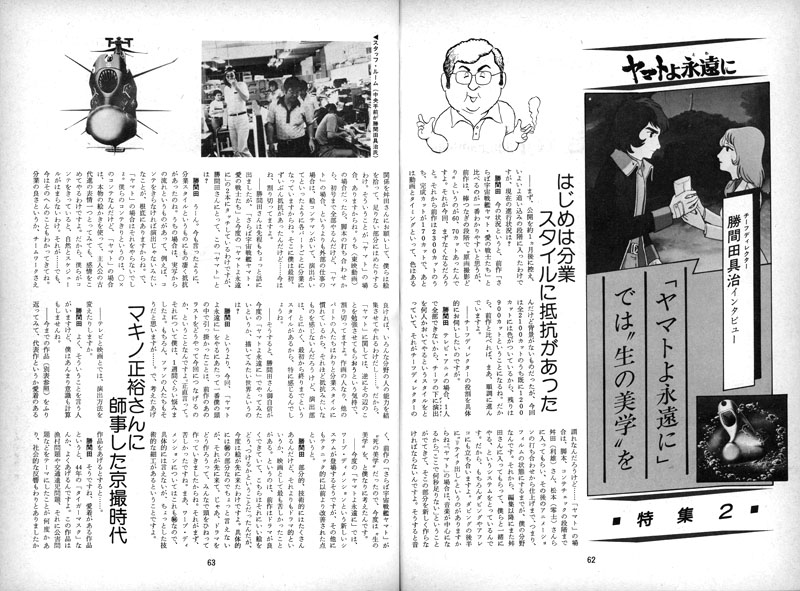 In the Beginning, there was resistance to the style of division of labor

Interviewer: First, it is about a month until the premiere and you’ve entered the homestretch. What’s the current progress?

Katsumata: Talking about the situation now, compared to Farewell to Yamato, it had sixty to seventy unfinished scenes still in black and white at this point. We won’t have that problem this time. Also, Farewell had only 170 finished scenes out of 2700. The rest were fill-ins and ‘timing,’ which means colored cels but no background. This time 1200 scenes out of 2100 total are all colored and there are only 900 to go. So, compared with the previous work, we are on track.

Interviewer: I want to ask you specifically about the role of Chief Director.

Katsumata: In the case of TV anime one person cannot do it all alone, so the style is to establish other directors under the Chief Director.

In the case of Yamato, Toshio Masuda checks the script and storyboards, then Leiji Matsumoto comes in. From those meetings to the finished animation, meaning the state of transformation into a film, is my field.

Then Mr. Masuda comes back in for editing and we work in a system together. Therefore, of course, I participate in the recording and dubbing. The reason for this is because we can identify “retakes” during the dubbing. Because music plays a key role in Yamato, we can see that “we need a few more seconds here,” and I have to make a new part. I consult with Mr. Masuda on the sound issues, then we pick up a scene and insert it into the missing part. That’s how it is with such a thing as Yamato.

Our in-house titles [at Toei] go through the whole process from script brainstorming to the first print check, but in the case of Yamato and all other outside works, there are divisions of labor such as storyboard artist, director and so on. I encountered a lot of resistance to that at first, but now it’s practical and efficient. 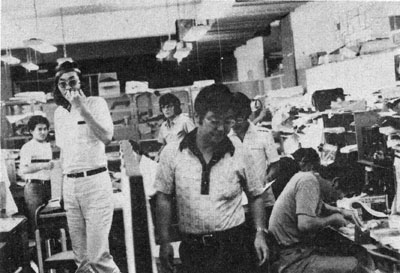 Interviewer: As you mentioned earlier, you’ve been involved with two Yamato titles: Farewell and Be Forever. So what does Yamato mean to you?

Katsumata: As I said, there was strong resistance to the style of division of labor. Toei Anime was split from Toei [live-action] Movie, so there is a traditional basic rule, such as you cannot be a director if you cannot write a script and draw storyboards.

But in the case of Yamato that rule cannot be applied. Toei storyboards are simplified with marks like a circle and cross to indicate people. But Yamato‘s storyboard is drawn by professional artists and Kodai’s face is full of emotion even at the storyboarding stage. So our Toei style does not fit the format of Yamato storyboarding. But I am getting used to it.

In good teamwork, we can concentrate the abilities of people in various fields and the division of labor is advantageous. So when working on Yamato, I accept the condition and try to learn from that. Animators and other departments are flexible with the labor division and not frustrated, but directors like me struggle against our traditional Toei method from the very beginning to the very end.

Interviewer: Then what do you think when joining Be Forever and putting your signature on it?

Katsumata: This time what I thought about the most with Be Forever was how we could measure up to the previous work. Honestly, I was worried about it for about a week. The fans have that same worry, I’m sure. After I thought of Farewell to Yamato as “the Beauty of Death,” my thinking this time is about “the Beauty of Life.”

Interviewer: In the film, a new system called Warp Dimension is said to appear on the screen, and other techniques have improved in addition to that.

Katsumata: Yes, there are some improvements on the technical side, but this is the hardest one to achieve as a movie. With the previous work, the story was done first and we had to decide how to adapt it into pictures, but this time the pictures came first. I cannot reveal all of the details since they are classified, but we started with images and figured out later what drama would fit into it. We all had a really hard time thinking about it. That was the toughest part.

As for Warp Dimension, this is also classified and I cannot say much about that, but there is a kind of technical trick in it. 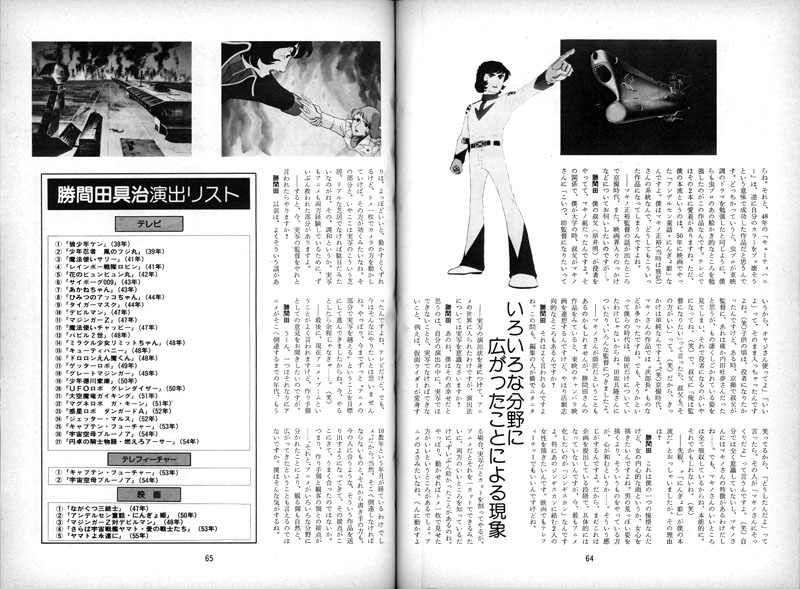 Interviewer: Do you use different methods of direction for TV and film?

Katsumata: There are some people who describe that well, but I don’t think about it too much.

Interviewer: Looking back on your past work, which one would you consider your best, or which do you like the most?

Katsumata: Well, as for a work that I liked, Tiger Mask from 1969 comes to mind. There was a lot of social commentary in it. It dealt with the problems of a fishing village, a child orphaned in a traffic accident, and the issue of pollution came up several times.

That and Cutie Honey in 1973 were both successful works in that they set a new tone. Just as Mushi Pro studied and adopted the artistry and drama of Toei productions, it was on those works that I adopted the styles of Mushi Pro. Those were both TV series.

But my mainstream is a theatrical feature titled Andersen’s Children’s Story: The Little Mermaid from 1975. I was trained under the movie director master Masahiro Makino, so naturally my works go that way.

Interviewer: Since you mention Masahiro Makino, could you tell about your days of Kyoto Studio and how you entered into the movie business?

Katsumata: My uncle (Akira Kishii) worked as an actor in the Makino group. So he spoke to Makino when I was a college student and said, “This boy wants to be an assistant director. Hire him, please.” And Makino answered, “Sure.” That’s how I got in. (laughs)

In my childhood I thought I wanted to become an actor, but at Kyoto Studio my uncle was strictly supervised by a director, probably Tom Uchida, and when I saw that I decided I didn’t want to be an actor. So I told my uncle that I wanted to be a director then he replied, “that’s better.” The motivation was that simple. (Laughs)

At the studio, I worked for Makino’s Jiro-cho movies [Translator’s note: a series of movies featuring Jirocho Shimizu as a central character]. But in my time we did not work only with one particular master director. I worked for Tomotaka Tasaka and many others.

Interviewer: It may be said that Mr. Makino is your teacher, but when I look at your work it reminds me of the fighting scenes in Toei samurai movies. Is there a connection?

Katsumata: That’s well-said. Once an editor was giggling during our work and I asked, “what is it?” He said, “it’s just like Makino.” (Laughs) I’m not conscious of it at all. Mr.Makino has his own style. But it might be that Mr. Makino was a good source from which I absorbed all my instincts. (Laughs)

Interviewer: You said that The Little Mermaid is your mainstream, could you give the reason why?

Katsumata: I admire it greatly, even though it’s an aspect of the female mind. I like to visualize a woman’s feelings. I feel comfort when I work on a girl’s love story rather than a boys’ crucial struggle.

I most want to turn Genghis Khan into anime. It’s still in the stage where a plan is being submitted and there’s nothing specific yet, but I especially want to depict two women involved with Genghis Khan. It would make a good movie or telefeature. 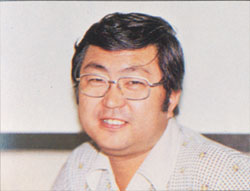 A Phenomenon Expanding into Various Fields

Interviewer: The dramatic sensibilities of live-action have begun to enter the world of anime. Are you conscious of using live-action techniques?

Katsumata: Well, I feel lucky since I find things in my directing technique that you can’t do in live-action.

For example, when Masked Rider transforms, you have to break it into two scenes in live-action but in animation you can do it in one scene. So by knowing both live action and anime, the good sides of both, it helped me a lot. And I can choose the advantage only anime can achieve, such as a total one-shot sequence.

There may be some distortion when simulating a live-action camera move, but animating in still single frames and moving the camera instead works much better. So I hire a live-action tech since the action requires the drama of both reality and anime. That harmony is what I can bring to it, since I experienced both live-action and anime. And it saved me many times.

Interviewer: Would you direct for live-action if you were given the job?

Katsumata: I used to talk about doing it for TV, but I don’t think I want to do it so much now. I have stepped forward aiming toward the goal of anime surpassing live-action, and if the director came from live-action, the result must be outstanding! (Laughs)

Interviewer: Finally, I’d like to hear your opinion of the anime boom as someone on the production side.

Katsumata: Well, actually it took ten years or so to achieve the anime level we have now, and there must be certain anime at that level. Directors and anime artists have made their works to fit the tastes of modern audiences. Now both match perfectly, I guess. That is, the contact between the creators and the audience. Also, anime has expanded into different fields and tastes, so viewers’ interests and tastes are expanding too. That’s my feeling about it.