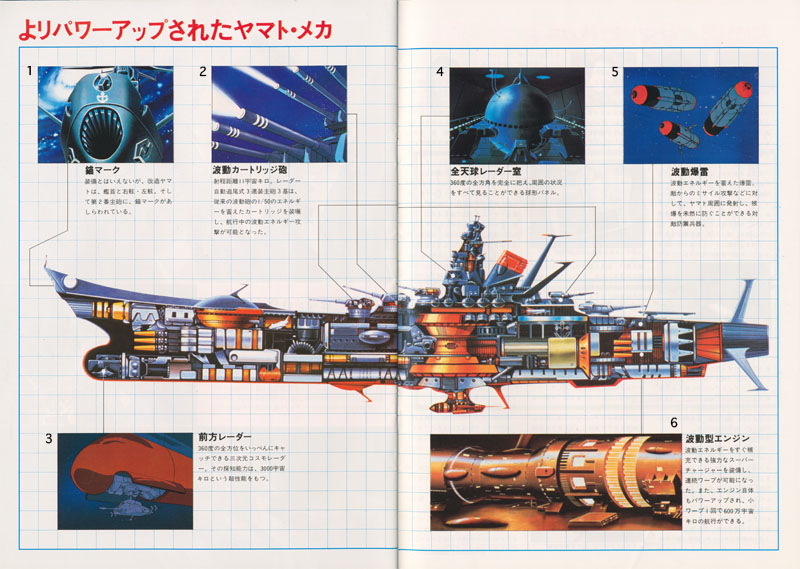 1. The Anchor Mark
Though this is technically not equipment, the remodeled Yamato is decorated with anchor marks on the bow, the flanks, and the second main cannon.

2. Wave-Motion Cartridge Cannon
The shooting range is 11 space kilometers. The three triple-barrel cannons, equipped with a radar-based auto tracking system, are loaded with cartridges which have 1/50 the energy of the Wave-Motion gun, enabling Yamato to attack with Wave-Motion energy while in flight.

3. Bow Radar
The three-dimensional cosmo radar can cover 360 degrees at once with a range of 3000 space kilometers.

4. Spherical Radar Room
This chamber is equipped with a sphere-shape panel which can display the entire surroundings.

5. Wave-Motion Depth Charge
This is a bomb charged with Wave-Motion energy. It is a defensive weapon used against enemy missile attacks, functioning as a shield when deployed around the ship.

6. Wave-Motion Engine
The engine is equipped with a super-charger which can immediately recharge the wave-motion energy and enable Yamato to do continuous warping. The engine itself is also enhanced, and one small warp can span 600 million space kilometers. 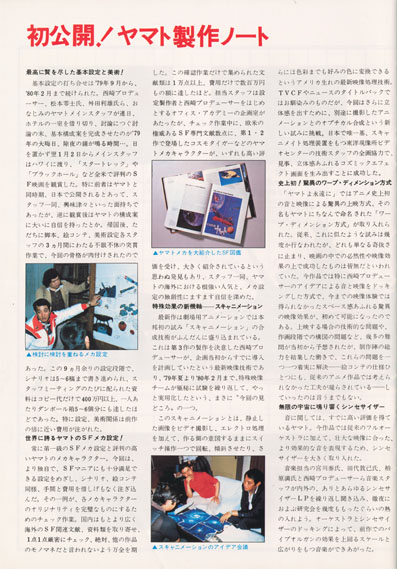 Conceptual discussions started in September 1979 and continued through February 1980. Familiar Yamato staff members, such as Producer Nishizaki, Leiji Matsumoto, Toshio Masuda and others were together in a hotel room on the last day of 1979, and established the basic concepts just before the bells rang in the new year. The main staff left for Hawaii on January 2, and watched such popular American SF films as Star Trek, The Black Hole, and others. Star Trek would be released in Japan simultaneously with Be Forever, so they were very curious about the film. But after seeing it, their confidence in their own work was reinforced.

Upon their return to Japan, a three-month crash program began to create the script, storyboards, and art concepts. During this period, the script was revised five or six times, photocopy costs exceeded 4 million yen, and paper documents filled five or six boxes. The budget for pre-production nearly doubled that of the previous film.

Yamato‘s mechanical design is consistently regarded as first class. This time, in order to fully satisfy SF appetites, time and money were lavished on design as well as script and storyboard. One example was the exhaustive research; the staff examined SF-related materials from all over the world to ensure that Yamato‘s designs would be completely original. Nearly 10,000 individual pieces were studied, with a total cost exceeding millions of yen.

The staff members in charge were the conceptual designers and Office Academy’s planning team, including Producer Nishizaki. During the course of this research, they unexpectedly discovered that several Western SF publications expressed a high degree of appreciation for Yamato‘s previous mecha design. Yamato‘s growing overseas popularity deepened the confidence of the entire staff.

This new film introduces a technique called scanimation to Japanese cinema. This is state-of-the-art visual technology which Producer Nishizaki advocated from the beginning of production. The visual effects team experimented with it (in secret) from the summer of 1979 to February 1980 to make it practicable. This is truly one of the points to watch in this film.

The scanimation visual treatment technique was born in America. By converting and enhancing still pictures to video, the image can be manipulated in many unique ways. This is frequently used in TV commercials and the title background of news programs. In this case, in order to increase the depth of image, the staff took on the challenge of optical synthesizing by shooting many animation elements separately. Thanks to the full cooperation of Toyo Genzosho Video Center, they succeeded in creating fully-dimensional special effects.

Be Forever Yamato used this unique screening method for the first time in the history of animation, incorporated both sound and picture. “Warp Dimension method” was named after Yamato. Similar attempts had been made previously, but none had met with great success, or been seen as particularly relevant to a film’s content.

In this work, Producer Nishizaki’s idea was to enhance the sound and picture, creating stunning, huge-scale visual effects that had never been achieved before. Many difficulties were anticipated, such as the capability of the screening venue and the composition of the animation, but the concentrated efforts of the staff solved these problems one by one. Even the storyboard process demonstrated many unexpected advances over previous films.

The synthesizer, which resounds through the depths of space

Yamato has already achieved a great reputation for the use of sound and music. In this film, in addition to a full orchestra, a synthesizer was extensively used to express sounds suitable to the magnificent visual image. The music staff, including Maestro Hiroshi Miyagawa, Atsumi Tashiro, Mitsuru Kashiwabara, and Producer Nishizaki were so enthusiastic that they listened to every synthesizer LP they could find and held many all-night discussions. By combining orchestra and synthesizer, they created music that exceeded the scale and effect created by a pipe organ in the previous film.