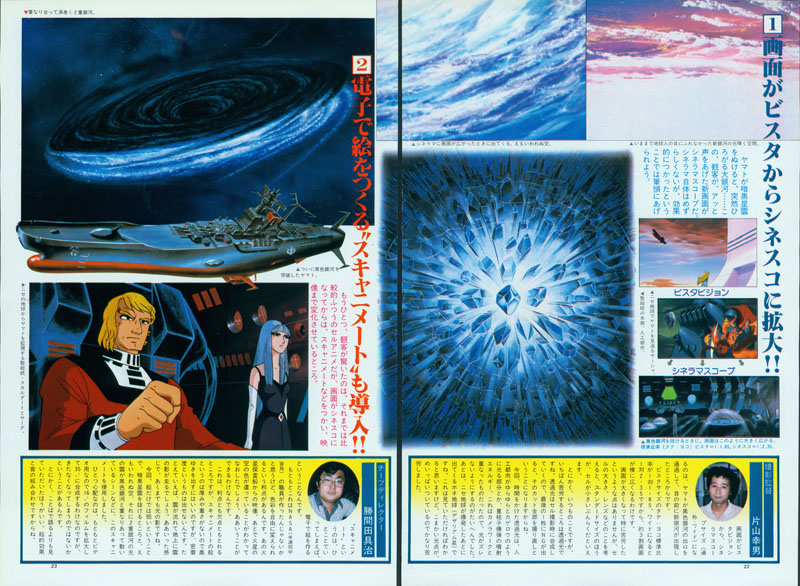 The Screen Expands from Vista Vision to Cinerama Scope!

When Yamato pierces the Dark Nebula, suddenly a great galaxy appears. The new image, which raised voices of amazement from the audience, is Cinerama scope. “Cinescope” itself is not rare, but this is the best example of how to use it effectively.

When Yamato goes through the Dark Nebula, the screen is expanded like so. The Vista-vision ratio is 1 x 1.85. Cinescope is 1 x 2.35. 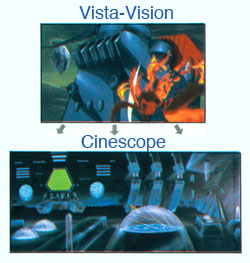 The screen changes from Vista-Vision to Cineramascope when Yamato leaves the Dark Nebula and the new galaxy appears. The Vista-vision ratio is 1 x 1.85. Cinescope is 1 x 2.35, approximately 30% larger horizontally. It is not technically more difficult to produce animation for Cinescope, but the standard frame size is more common because the individual cels can be smaller.

As always, the hardest part is to create special lighting effects, which are double-exposed while photographing a cel. If any single frame doesn’t work, we need to reshoot the whole scene from the beginning.

This time, the most complex lighting effects were the artificial city glittering like a heat haze, and the radiation energy of the hyperon bomb. Since they were double-exposed in-camera, it was hard to control the light. Another was the skeletal Planet Dezarium after the explosion of the fake Earth. You will understand when you see it, that there are as many points of light as you can imagine, so we had quite a hard time with it.

Another point that amazed the audience was that after the screen shifted to Cinerama Scope size, the image is also changed by using “Scanimate.”

Originally, this technique was invented by NASA, and the advantage is that we can freely change colors. For example, when the images were sent from Mars by the Viking Spacecraft, they realized that the color of the sky was off, and they fixed it electronically. This is the sort of thing that can now be done.

Scanimate pictures do not show the thickness or heaviness of cel layers, so it is a very good method for creating depth, but it does not have the same sense of weight. For example, when a cloud moves, its shadow moves across the ground. Scanimate is similar, because it is an image composed of light, after all.

This time, since the conventional picture was not strong enough, we used Scanimate when Yamato gets through the Dark Nebula, for a sky image that goes beyond words, and also for the scene of the double galaxy with the moving clouds of light overlapping the Black Galaxy.

One concern I had was that Scanimate originated on video rather than film, and if we enlarged 16mm film and synthesized it to 35mm [the normal procedure at that time], it would make the image look grainy. Regardless, it is better if you watch the film rather than read my words. The uniqueness of the film comes from its combination of sounds and pictures. 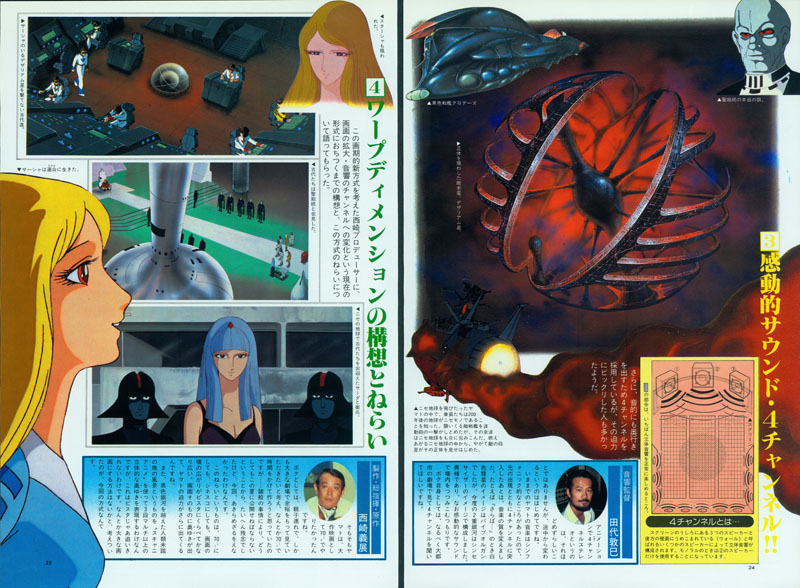 What is 4-Channel? Stereophonic sound consists of three speakers behind the screen and several more speakers plugged into the back wall. Monaural sound uses a single, central speaker only.

It is not rare to use a 4-channel stereo system for animation, but this is first time anyone has used it as a focal point.

The previous music of Yamato was symphonic, so we changed this quality when the White Galaxy appears and the sound system switches to 4-channel. In Farewell to Yamato, the sound image of the White Comet was performed on a pipe organ, but the image of this double galaxy was created by a synthesizer. I like to fill a theater with unusual and moving sound.

I personally hope all the viewers go to the theaters in the city and have the complete 4-channel experience.

The Aim and Concept behind “Warp Dimension”

Producer Yoshinobu Nishizaki, the creator of this historic new method, talks about the concept as well as the aim of this method.

Originally I wanted to create Space Battleship Yamato as a big movie, using 70 mm film. I wanted families to watch this film together in a large, spacious theater. I wanted to take my time with this new movie and create it in 70mm, but for many combined reasons we needed to release it this summer. So despite my regrets, I had to give it up this time.

The aim of this method is that the screen is much larger in 70 mm or Cinerama Scope than conventional Vista Vision. The screen shows greater depth, and the power of Yamato is further enhanced.

Also, for the unprecedented Double Galaxy scene, we want to create more depth with Scanimation than the usual 3-layer cel setup. Vista Vision was not enough to support this. We wanted another way to make the screen larger, and this was our solution.

Column on left side of page:

The staff and voice actors were sequestered in the studio from 10AM to midnight for three days. After this tremendous struggle, a press conference was organized. 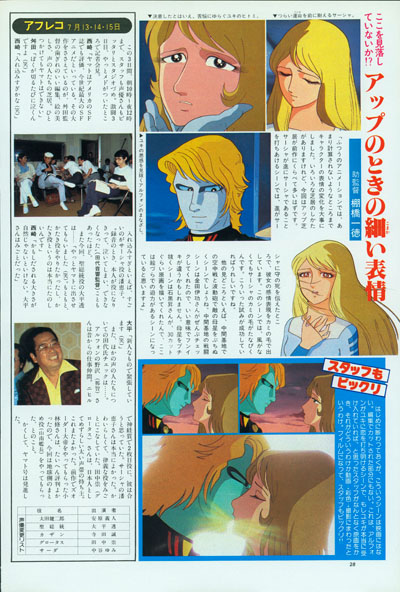 Yoshinobu Nishizaki (producer): The first Yamato movie was reviewed by American SF journals and evaluated as the best SF anime of the century. Director Masuda’s sharp editing, the beauty of the picture, and the voice performances all live up to this honor. Without any of these, Yamato cannot be made.

Toshio Masuda (director): He cried whenever I cut a scene.

Nishizaki: Maybe I’m too absorbed by it! Speaking of over-absorption, Keiko Han as Sasha was incredible in her performance as the voice of Sasha.

Atsumi Tashiro (sound director): At the recording, she completely got into the role and cried, so we could not proceed.

Toru Ohira (voice actor, Skaldart): Finally I was allowed to participate in Yamato! I always wanted to play a villain, so it’s a lot of fun!

Nishizaki: The Emperor had to have a natural commanding presence. Mr. Ohira was awesome.

As for other voice performers…

Tashiro: Mr. Nachi Nozawa, who played Alphon, is an old colleague. I thought his voice was a perfect fit; nihilistic, cool and handsome. Ms. Keiko Han as Sasha was really good, both cute and conscientious. Mr. So Tanaka (Grotas) has an unusually thick vocal cord, which is very good as well. [Editor’s Note: Tanaka later changed his name to Banjou Ginga, and is a highly-respected voice actor to this day.] We also had Mr. Osamu Kobayashi, who played Emperor Zordar in Farewell to Yamato. He did such a great job before, we asked him back to play the leader on the Earth side, Captain Yamanami. [Editor’s note: he also played General Domel in Series 1.]

With this last phase of production completed, Yamato was ready to launch.

Points to Watch for in the Animation

We took great care with the facial expressions of characters, beyond the level of regular animation works. There are many approaches to acting, but this time we have more close-up shots than usual. In the scene when Sasha reveals her identity to Kodai, and he tells her about the death of Mamoru, her emotion is expressed by her hair. Sasha’s hair sways even though there is no wind. I hope touches like this are successful.

Another sequence to watch closely is the dogfight at the supply base. The very accomplished animator Yoshinori Kanada supervised this sequence, and it feels different from our previous works, but in a positive way. [Editor’s Note: Kanada is a very influential animator whose work goes back to the 1970s. He is largely responsible for the unique staging of combat scenes in Be Forever and Series 3. Read our tribute to him here.]

Also, the scene in which Yamato destroys the enemy’s mother planet with the Wave-Motion gun is particularly notable. Noboru Ishiguro personally drew key animation for approximately 30 scenes, bringing his own sense of dynamics directly to the screen. 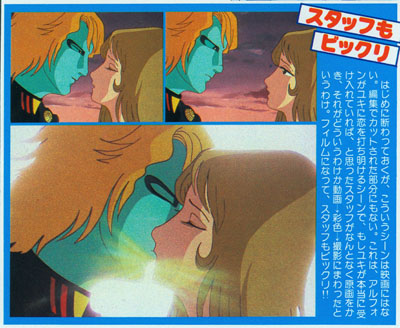 Even the Staff was Surprised

In all films, some scenes are cut during production. This one was not only cut, it was never intended to appear in the first place. This was an extension of the scene in which Alphon reveals his love to Yuki. An unnamed animator on the staff wondered, “what if Yuki accepted him,” and decided to draw a few extra key frames. Somehow, they worked their way through the production system, receiving full in-between animation, coloring, and filming. Its unexpected appearance in the daily workprint surprised everyone!!

Special thanks to Michiko Ito for translation