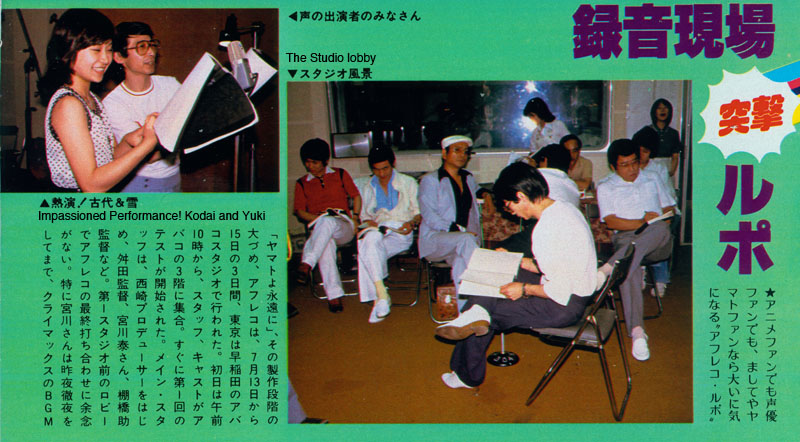 A “Recording Report” attracts a great deal of attention from both anime fans and voice-actor fans, much more for Yamato fans. The last part of Be Forever Yamato‘s production was the three-day voice recording between July 13 and 15, performed at Avaco Studio of Waseda, Tokyo.

The staff and cast gathered at 10:00 am the first day on the third floor of Avaco. The first test started immediately.

The main staff, including Producer Yoshinobu Nishizaki, Director Toshio Masuda, Composer Hiroshi Miyagawa and Assistant Director Kazunori Tanahashi, devoted themselves to a meeting in the lobby of recording studio no. 1. Miyagawa in particular had been up all night working on the climactic background music but still came to the studio in the morning.

The test was finally completed after noon. The voice actors came out of the studio. Mixed in with regular colleagues Kei Tomiyama [Kodai], Yoko Asagami [Yuki] and Hideo Nakamura [Shima] was Nachi Nozawa, who participates in Yamato for the first time. Best known as the voice of French actor Alain Delon, surely Yamato will be regarded as his second best. Sure enough, a handsome actor gets a handsome character in the enemy Lieutenant Alphon.

Nozawa: In fact, only Alphon’s head is flesh and blood. The rest of his body is all machine. Although he is a cyborg, he’s attracted to the body of a healthy human being. Through Alphon, the movie depicts a celebration of humanity, so to speak. I’m acting with my image, but it’s very hard. (Laughs)

Furthermore, Keiko Han took on the challenge in the major role of Sasha.

Han: The last scene moved me to tears. I was very impressed. You who have already seen the movie know well how impressive it is.

The recording continued from the 13th to the 14th and concluded on the 15th. This day was about the finishing touches, so both the staff and cast did their best.

Toru Ohira, who is also participating in Yamato for the first time, took part in a special press conference.

Ohira: I entered into this world because I wanted to do a villain. Since this character [Skaldart] is major figure of evil, I was enthusiastic.

Anyway, the luxurious performance in the voice recording seemed to be a great success.

Yamato fans were moved by the catchphrase, “Journey on Yamato to the New Galaxy.”

In one of the campaigns for Yamato, a 10,000 ton car ferry was remodeled as Yamato; there was the big lottery event for participants to enjoy a three-day, two-night journey in the sun.

On June 29, rain fell on the meeting place, the square outside the east exit of Shinjuku station. A group of more than 200 people stood vigil overnight to wait for the opening. It was said that some had been waiting since the 27th, two days earlier. They said they were aware winners would be chosen by lottery or something, but they wanted to do everything they could. The passion of Yamato fans is well understood.

The drawing of lots began 24 minutes late, at 1:24 pm. The hysteria outside Shinjuku station reached a fever pitch. When a lucky number was read, great shouts of joy swirled around in the open space. 15,000 people gathered for this climax of Yamato Fever.