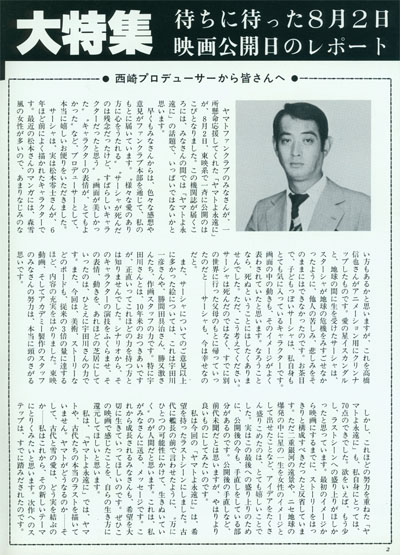 From Producer Nishizaki to Everyone

Be Forever Yamato, which everyone in the Yamato fan club actively supported, went into wide release through the Toei theater system on August 2. When this magazine reaches you, I fully believe that Be Forever will be the hot topic among all of you.

Various opinions and impressions from you have already reached me through the fan club headquarters.

“My heart was struck by the various states of love.”
“Sasha’s death was unfortunate, but I think she was a wonderful character.”
“The imagery was beautiful.”
“The facial expressions of the characters look very good.”

It is delightful for a producer to receive letters like these.

In fact, Sasha was a character drawn by Leiji Matsumoto about six years ago. Recent Leiji Matsumoto manga feature many women in the style of Yuki and I thought they might look a little too familiar, so Shinya Takahashi did the cleanup of this design for animation.

Sasha, who was born between the Earth and the planet of love Iscandar, was unable to overlook the crisis of Earth or the pain and suffering of other people. Sasha is playful and childlike, a character with whom I myself am very pleased. I think that image and the movement on the screen were well represented.

If possible, I didn’t want her to die. However, please consider this: Sasha did not die. She was able to return to her parents in another world, and she is now happy there.

Also, there were many opinions with regard to the animation of Sasha, which comes from the power of the art staff: Kazuhiko Udagawa, Tomoharu Katsumata, and Geki Katsumata. I’ve been acquainted with Mr. Udagawa in particular for ten years, but to be honest I didn’t know he had this much power. It was entirely due to his power that the performance of the characters expanded from the script and moved across the screen.

Also this time, the artwork–including the storyboard–reached about three times the usual quantity and measure of content. I don’t know how to express my thanks for the efforts of everyone on the production staff of Toei Animation and Academy Studio. But in spite of such efforts, Be Forever Yamato‘s score was 70 points out of 100 for me. 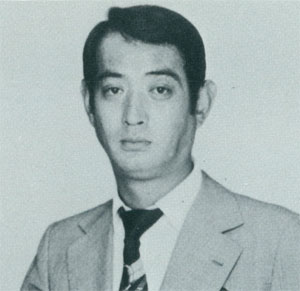 Speaking for my own desires, I wanted the last scene to be a little more climactic. From the time the first image was made, I reflected that I should have built up the story more clearly. I was glad that we could include many ideas, such as the wide view of the double galaxy and the image of a woman as the life of the planet in the explosion of the fake Earth. In fact, even now after the peak of the premiere, I have reworked some parts. It is unprecedented to make alterations after a film is released, but I’d like to make it better, after all.

I made the last scene of Be Forever Yamato to be hopeful. As Kodai was told by Captain Okita, “I try to survive even if there’s only a one-in-a-million chance.” I think that’s human.

This is the message which I send to all of you: I’d like you youngsters to live with hope. Please take the feeling you got from this movie and make it spiritual nourishment for your life.

I did not present the true finale of Kodai and Yamato in Be Forever. What will happen to Yamato, and how will the love of Kodai and Yuki reach fruition? Now I want to tackle this with a new theme. The first step to the next product has already been taken.